Rather than allow Kapitain Root to exploit his own breakthrough, 8th Army Command sent up a fresh opponent for the beleaguered survivors under Whittier and Wolther. Taking advantage of the pause, both commanders holed up in the cover of the wooded heights south of Hillmicke. Once in position, Wolther called up for reinforcements, receiving some of the few survivors of Panzergrenadierbatailon 62. They were haggard, but they’d earned the oak leaves on their crest, and frankly, any warm bodies were welcome! 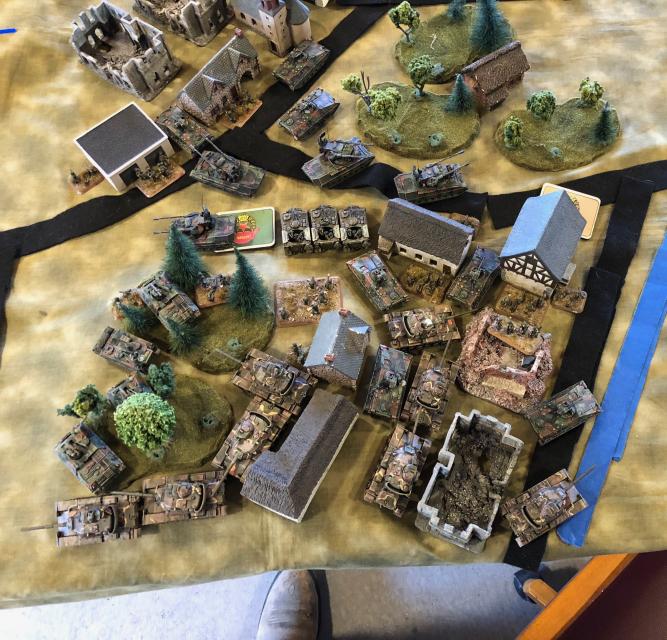 Tight Quarters! (maybe this shouldn't be a 100pt game!)

From his position on the heights, Captain Whittier, the forward commander, observed as the Soviets spent much of the day deploying their forces on the ridges surrounding them. He knew what was coming, and sure enough, eventually he saw the artillery park start to form in the cloverleaf of the interchange itself. It was a great position, as neither he nor Wolther could call fire on it from in the town, and yes, most of their units were tightly clustered in the town to prevent a breakthrough to the Rhein bridges west in Köln. The mornings fight hadn’t been meant to breakthrough, but to seal them up for the coup d’grace. 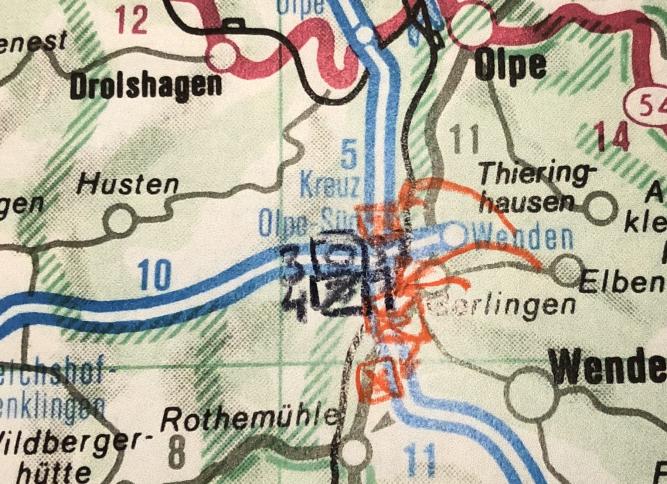 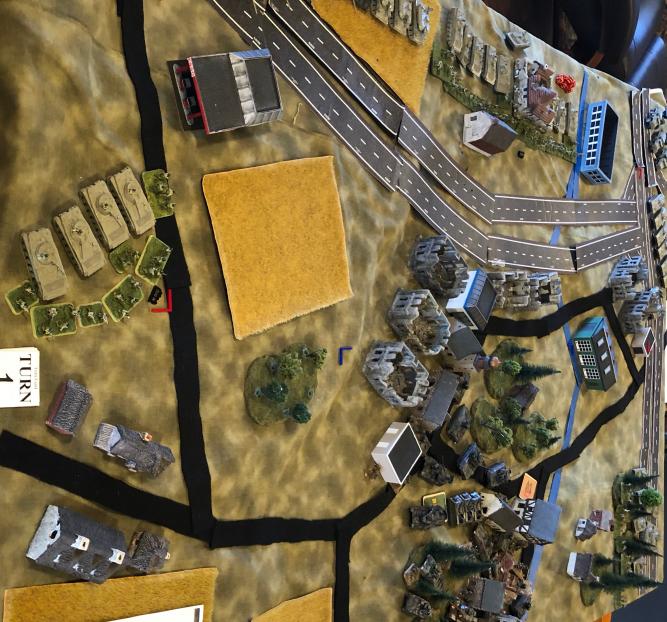 Surrounded! Was Their Fate Sealed?

The Soviets opened their assault like a textbook exercise. Artillery opened on anything it could see, but was less effective than might have been feared. Only the Carnations could find their target, and this they did, driving off the Jaguars of Panzerjager 60.

Then, just as that hail of fire stopped, Whittier saw the strike aircraft! 4 Frogfoot came sweeping in from the north, threatening to bomb out the main street of Hillmicke, and all the West German troops garrisoning the buildings on either side. No sooner had they appeared, however, than did Wolther’s Gepards turn to greet the threat with a devastating return fire. One, two, three, all four Frogfoot smoked or burst into flames, careening into the hills above Rothemühle. Fitting, Whittier thought, for that’s what they had just run into! He was sure Wolther was smiling from his overwatch positions in that vicinity. 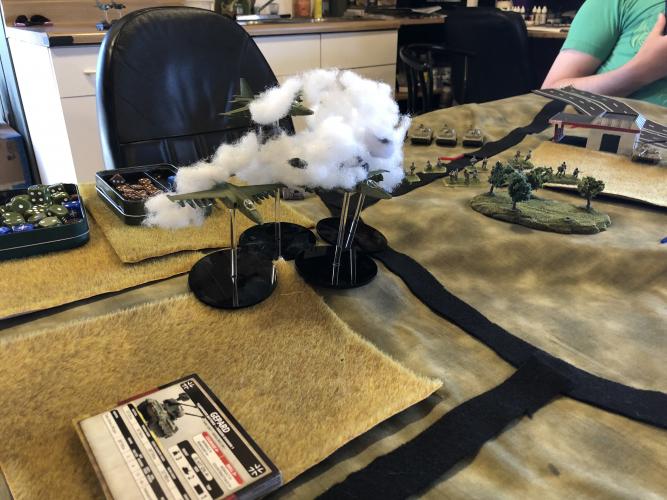 Through it all, however, Russian Recon and a small BMP unit managed to run down the A45, and were now flanking the town. Wolther would have to fight through them, if he was going to redeem the sacrifice of the Rosawulfe! 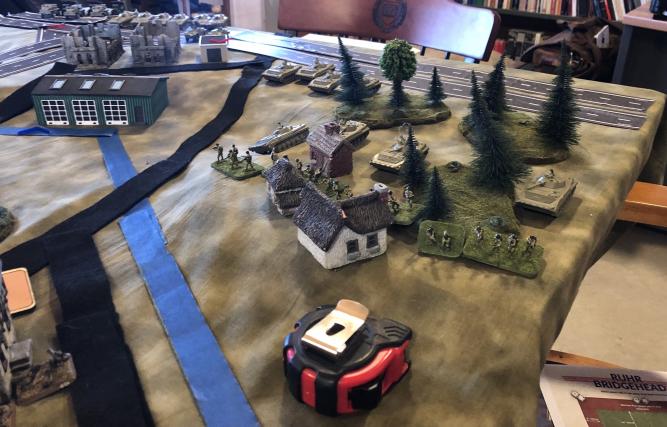 Outflanked in the Fury of Fire!

The surprise delayed Wolther’s arrival, and Whittier knew he couldn’t just sit in town and wait for more hail. Riggs, the platoon leader to his rear on the north side of the heights, ordered a “cross here” and moved the platoon into the woods where the Jaguars had stood. This gave Riggs an excellent chance to shoot up the T-72s moving cautiously on the town from the north. One, two three…but not the fourth lit up, and a fifth was badly rattled. The dismounted supporting the advance infantry found themselves pinned by the Panzermörser of the 62nd. That would slow them down for a while. 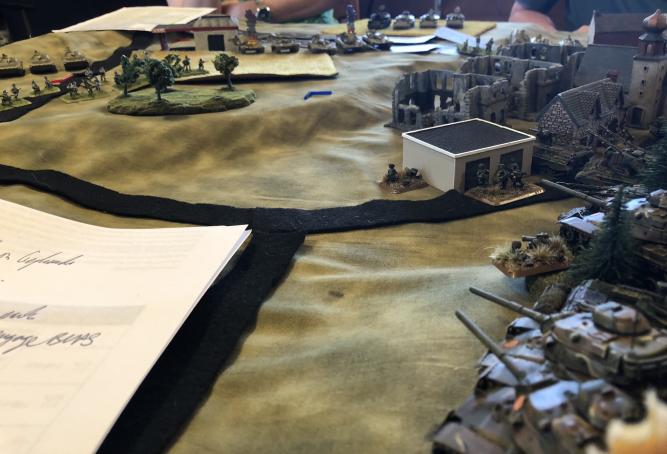 Ah, T-72s for a Change. What do Russians call their "Zippos"?

Meanwhile, in the nature park to the east of Hillmicke, Whittier revealed his ambush! As Whittier fired on the infantry that had advanced into the woods above the south end of the town, Gutierrez and 4 M-60s popped up to engage the BMP Recon with equally devastating fire. They were sitting in the open, and burned with ease. One remained as the smoke cleared, however, and couldn’t be driven off. 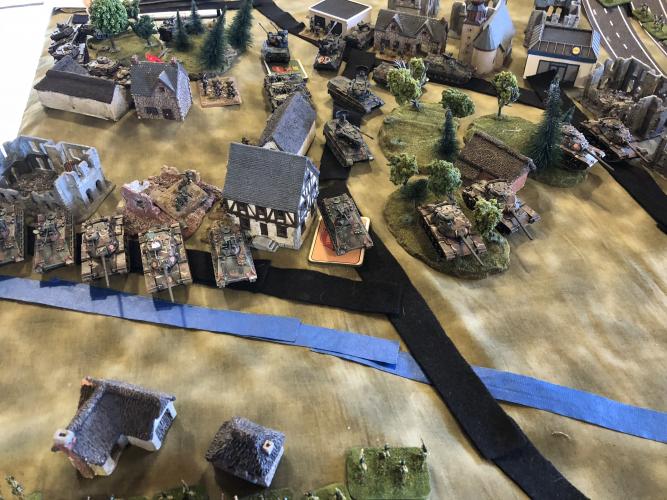 Whittier looked at his watch. It was a slow start for the Russians, but even slower for Wolther. Weren’t Germans supposed to be punctual!
His M-60s would pay for the delay, as the Russian commander took advantage of clear fields of fire into the nature park to use his Spandrels. This time it was the Russian’s turn to count one, two tanks burning. Then their infantry, moving in, added another with RPG fire. Gutierrez was in trouble! 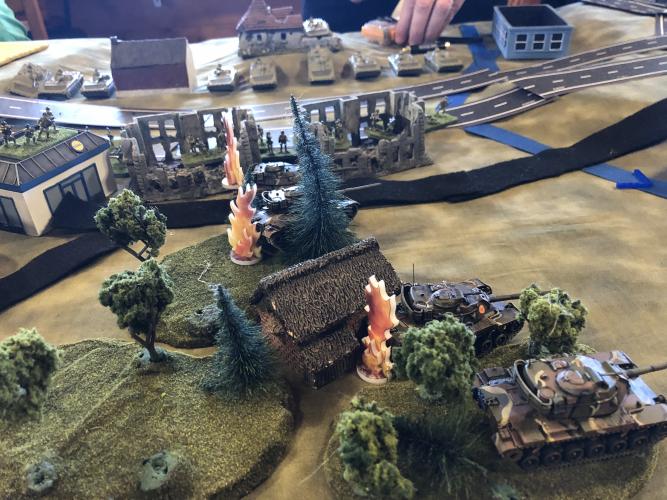 But Riggs had done his job. The T-72s broke and fled, while the decision to move into the woods proved a good one. BMP Sprandels came rushing in, but only stunned one tank crew for a moment. And to his own front, Whittier saw the Russians consolidate in a few buildings, taking cover rather than pressing forward.

In a few moments, he understood why. The 62nd's Marders had put some heat on them last turn, but they certainly weren’t expecting Wolther’s first Leopard Is to arrive BEHIND them at the same time as Wolther’s Gepards emerged from Hillmicke! The BMPs of the infantry unit burst into flames, as did the survivor of the recce patrol. The Marders chewed up anyone who wasn’t in a building, and Whittier added the final touch with main guns on those in the buildings. When all was said and done, only three fire teams remained holed up in those buildings. Everything else that had threatened the town from the south was gone. 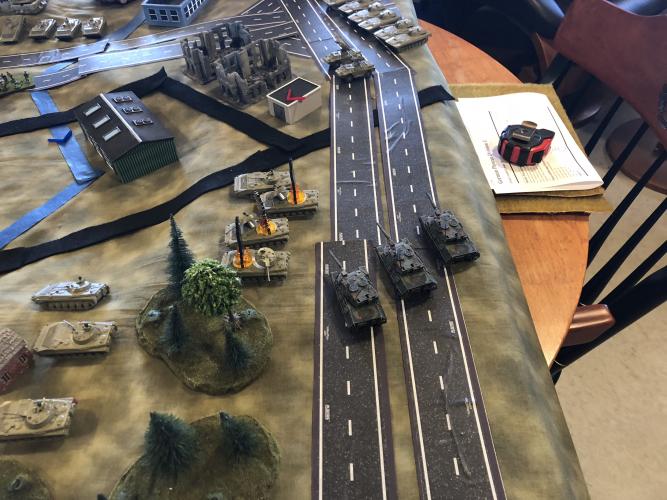 Leopard Is Can Really Be A Pain in the Arse!

Wolther has sent his Leopard Is in to eliminate the threat to Hillmicke, but it was now their turn to face elimination. The Russian artillery on the interchange pivoted to face, and opened a massive barrage that knocked out two, and bailed a third. Billowing black smoke rose up to join that of the BMPs. The Russian commander was smiling, but Wolther was smiling more. 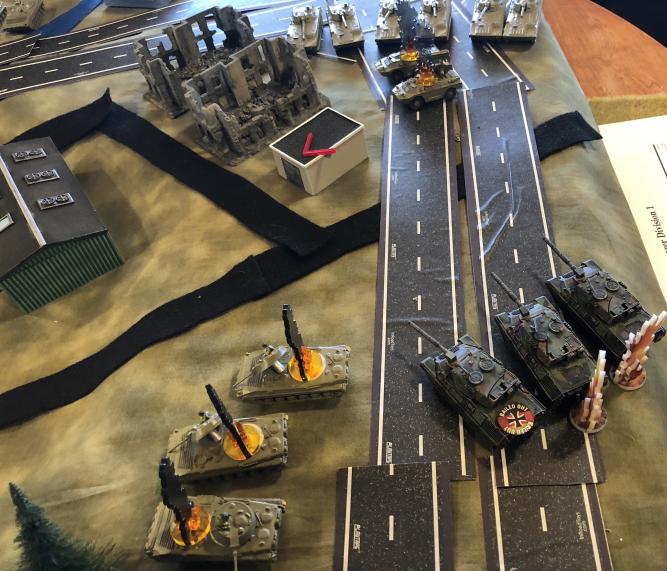 In the gap southeast of Hillmicke, his Gepards survived a blast from 3 Spandrels and 2 RPGs with only one track temporarily stunned. Likewise, his infantry in the vicinity of the Hillmicke Church repelled an assault as Russians emerged from the east edge of town. There were hordes of them, but they couldn’t quite come in all together given the congestion in town. 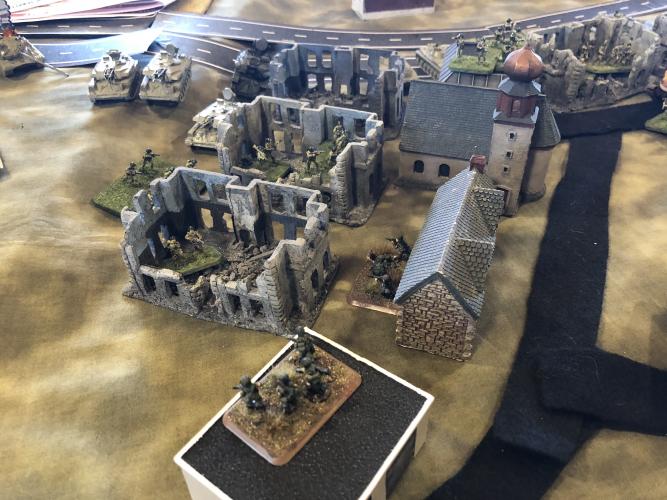 Oh The Irony of REDs Falling in a Church!

While dawn had been a friend to the Russians, the sun was starting to set on their planned assault. In the last light of day, Wolther’s Gepards swung around the south edge of Hillmicke and once again counted one, two, three burning BMPs! Wolther himself rode up the A45 seeking cover among his burning comrades, and counted one, two, three, four, five, and almost six burning Carnations before his volley was done. The BM-21s would be next! 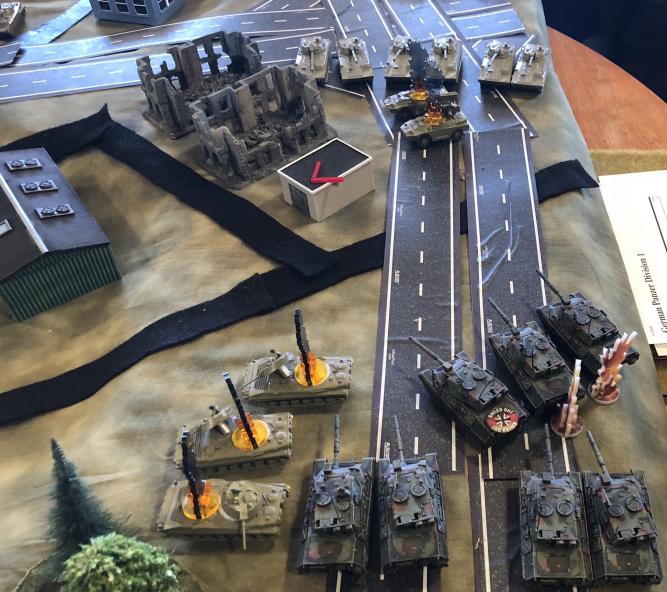 The threat of aerial bombardment and artillery neutralized, the German defenders of Hillmicke could now move out to engage the remaining infantry and support troops of the Russian force. Sensing disaster from the delays in his assault, the Russian commander wisely called it off. There would be a fresh unit to take his place in the morning! Whittier and Wolther had finally managed to stand their ground, and the Rhein bridges of the Ruhr region were safe, for now.