Elements of the 35th Motor Rifle Division attack to seal a NATO bridgehead. 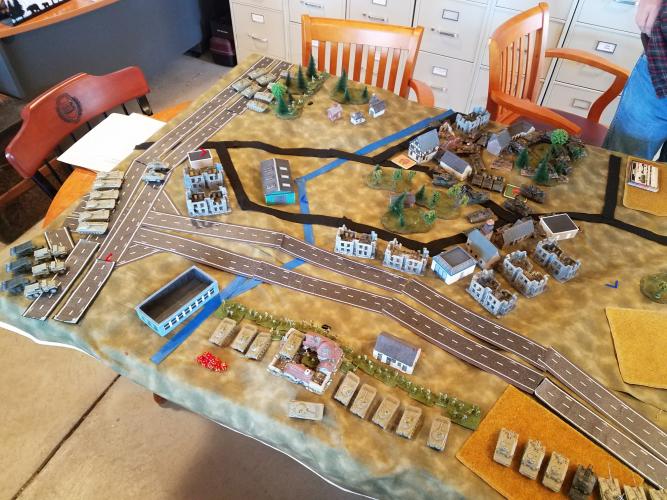 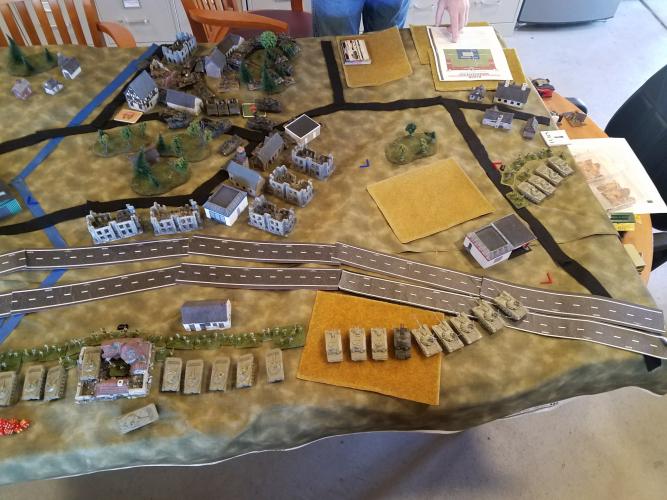 The plan of attack was a double-envelopment with pressure applied on the whole front.

Our recon element pressed forward on the left flank and secured an assembly area for 3 Company. Meanwhile 2 Company advance up the right flank and 1 Company in the center.

The attached Tank company maneuvered between 1 and 2 Companies with the Shilka Battery in support. The artillery parked in the left rear with support of the SAM Battery.

All companies dismounted for the advance, the Recon platoon providing fire support for 3 Company.

It was quickly assessed that NATO had crammed nearly everything that would fit into the bridgehead. M60 tanks were spotted along with Panzergrenadiers with AAA support.

Given the priority of this mission it was a welcome sign to have the flight of SU25 appear to open the engagement.

3 Company easily moved through the woods to their front and were able to occupy a village uphill and across a stream from the Left Objective. 2 Company was forced to cross open ground. The Tank company advanced between 1 and 2 companies and detected a Jaguar platoon in the woods to our right of our Right Objective.

The SU25 support was short lived as the Gepard battery removed them form the skies as the lined up their attack. This was a sign of how the battle might progress.

The Tanks opened fire on the Jaguars, killing one and disrupting another. Our Artillery ranged in on the center of the NATO position and caught the remaining Jaguar forcing them from the battlefield. Our Hail battery needed extra time to position and was unavailable to fire immediately (failed range-in attempts).

The threats on the flanks caused NATO to move the M60s into the line of battle and reveal a platoon that was in the Woods in the center of their position. Fire on the Right along with mortar fire destroyed most of 2 company's BMPs and forced the infantry to halt their advance. The M60's in the center took a toll on the Recon platoon and 3 company's BMPs.

1 Company was able to advance through the town in the center and along with the Recon and remaining 3 Company BMPs destroy the M60s platoon (3 KIA and morale failure). Meanwhile other elements of 1 Company maneuvered through the town to position attacks on the Panzergrenadiers in the buildings.

The Hail Battery was able to range in to cover the Left Objective with minimal results.

The battle remained a shootout with the Tank Company being rendered Combat ineffective (3 KIA, 2 removed due to morale failure) and the M60s on the right taking some losses to ATGM and Tank fire.

1 Company attempted to assault the Panzergrenadiers, but were repulsed with losses.

NATO was able to find units to come to their aid with a platoon of Leopard 1 advancing down our left flank behind the remnants of the Recon platoon. The took the SAM battery under fire, destroying it.

The Leopards success was short lived as the Carnation battery fired on them over open sight, killing 2 and suppressing the third. 3 Company meanwhile was being brought under massed 20mm and Maingun fire from a platoon of Marders and the HQ section of the M60s. This proved too much and the Company was lost.

A follow-on platoon of Leopards sealed our efforts as the took the Carnation battery under fire killing 5 guns. NATO moved the Gepard battery into ground support mode and eliminated a number of 1 Company's BMPs. 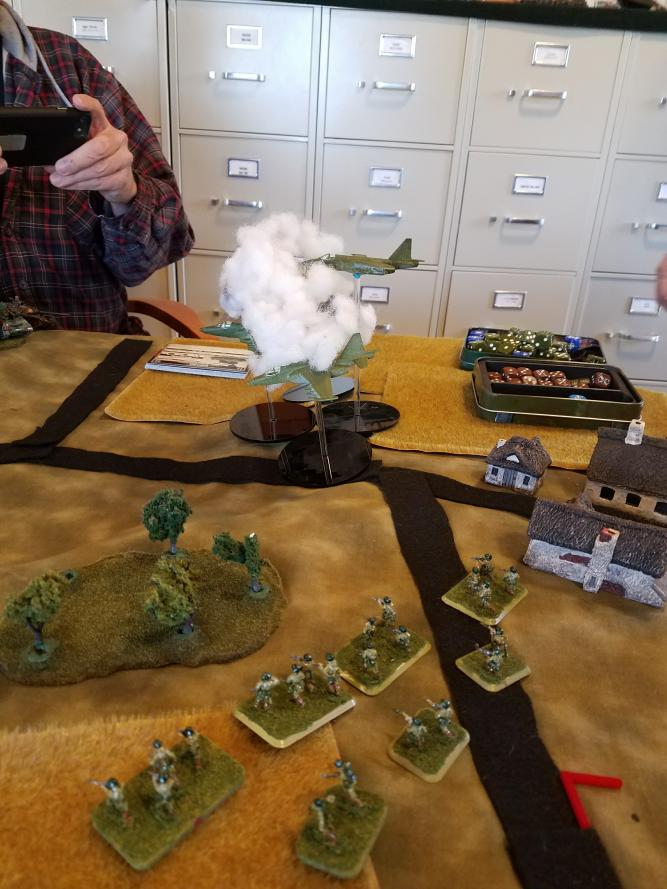 Soviet Airpower in its moment of Glory 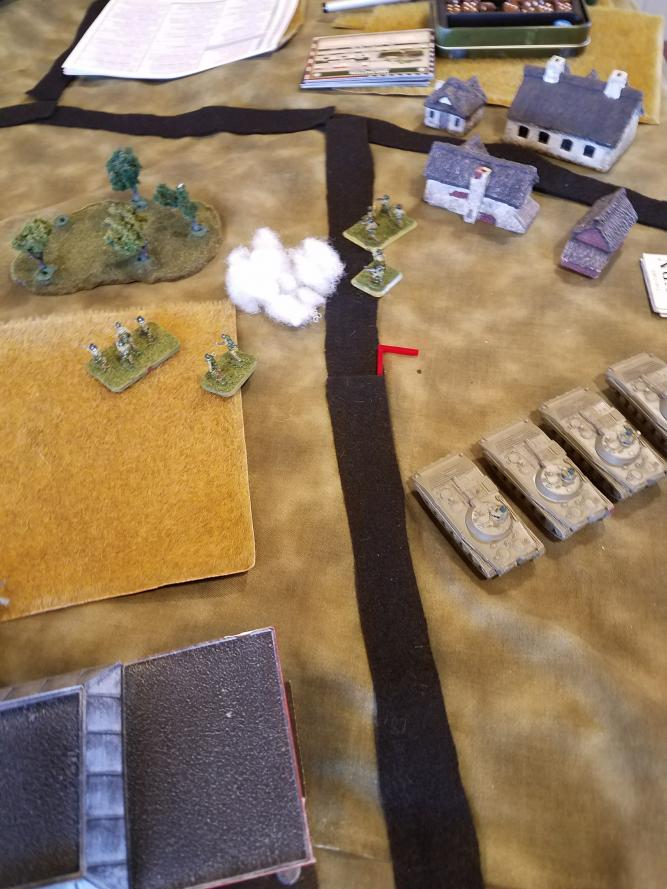 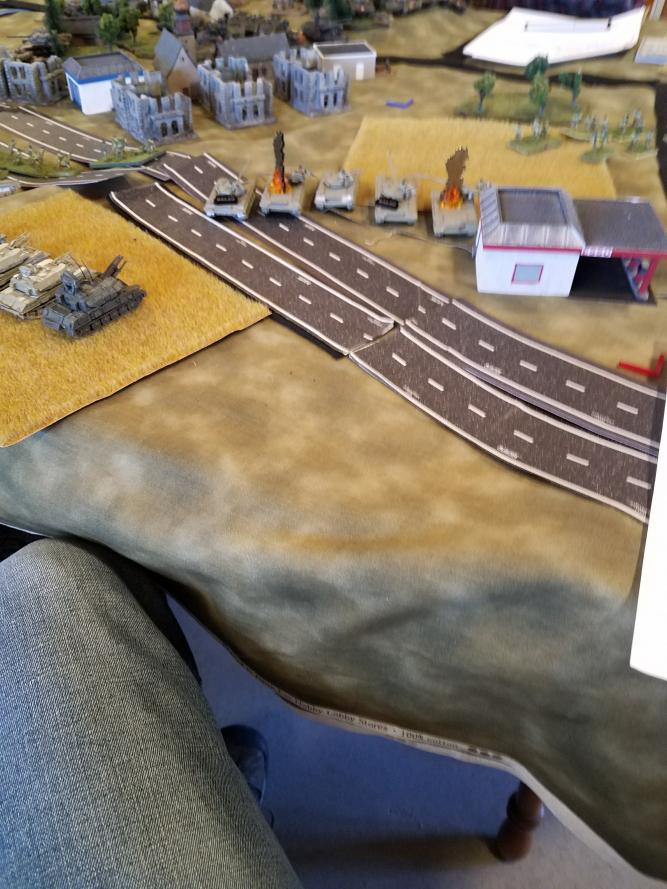 T72s in their normal state