It was very nearly a Soviet victory. In turn 2, I disgorged an entire company of infantry on top of the objective after using spearhead from a BMP-1 Recon unit. Unfortunately, Jim got a lot of machineguns into range in the next turn and blew the sons of Mother Russia away. Over 40 dice rolled. Some 30 hit. Just too many saves to make, and the company was killed to a man, giving their lives in service to the State for the freedom of the European proletariat.

From that point on, it was all down hill. 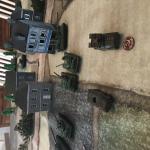 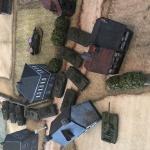