We caught them and we shot them with Rule 7.62!

Freshly arriving from England, our Company headed out to back up the tired NATO forces battling in the Ruhr. Our force consisted of three Chieftain troops, an Infantry platoon, four gun Abbott battery, a Swingfire troop, Harrier flight(2), Scorpion troop, Rapier Section, and a Lynx Hellarm flight(2).

We played Ruhr Counterattack. Half our force was off table. Having only three units on the table, and one in ambush, I did not have the luxury of having the Scorpions in the lead. The Soviet commander. J Womack expolited this getting within one move of the objective he placed. This was a huge mistake by me. I spent the next turn “Alpha-Striking” his infantry on the objective. The call went out on my Racal radio set. “All units advance to the objective and machine gun those Russians!”
So the ambush unit of Scorpions, my Chieftain, the XO, 1st Troop, Mech FV434’s, and Swingfires moved in range and fired on the Soviets teaming over the objective. The Abbotts also hit a barrage guided by the FO. When the smoke cleared, all that was left was what was left of a Soviet infantry company. Luckily for us, no longer capable of fighting. In a different time, I would almost feel bad, but not today. Victory was in our hearts, and revenge.
We fought two more turns before calling it. T64s coming in piecemeal from Reserve, and dying. Harriers struck, killing one T64 as well. In the end it came down to being able to kill the infantry in turn two due to my mistake in the recon battle. Luckily fate was on my side. A mistake and victory at the cost of the F434’s and Swingfires, both troops perishing. 4-3 UK Win. 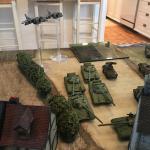 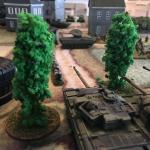 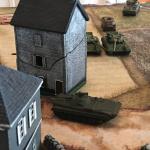 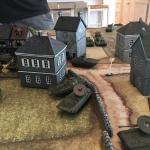 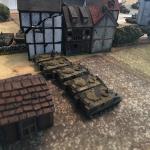 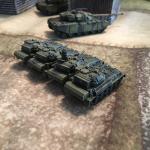 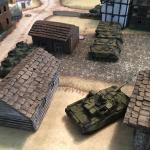 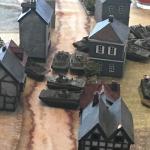