A Wolf in Sheep's Clothing

The advance towards Essen was a fail, but misfortunes never come alone: the news were heard, that Frankfurt was once more under attack!
Uwe Bauer gathered his forces and made all the way back, racing to the rescue and hoping he wouldn’t be late for it. In the suburbs of Frankfurt a new piece of information was given: the enemy is not the regular capitalist scum, but the most cunning of them, wearing blue helmets and painting their tanks white, so the World would know they are fighting for peace.
– Don’t trust these wolves in the sheep’s clothings, comrades! – Uwe told his men, – they are fighting for their capitalist masters, as all the others! We should stop them and protect the people of Frankfurt from the capitalist yoke!
The enemy was sighted in an estate near the city. The highspeed road could become a Panzerstrasse for the enemy, so it should be held at any cost! 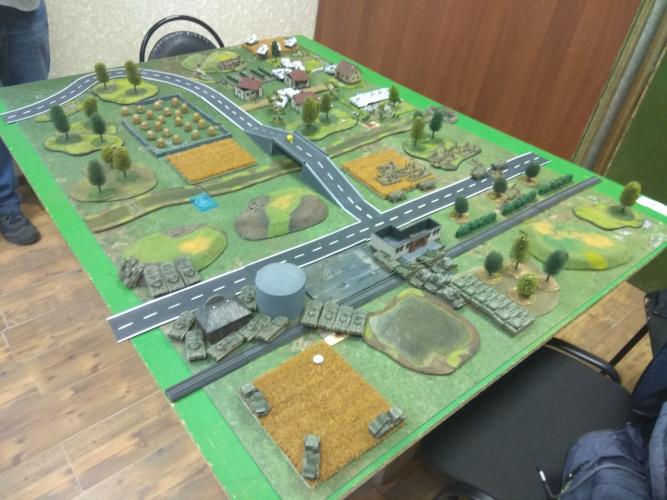 The light BRDM scouted the way for the infantry, while the BMPs got into position in the secon echelon, ready to support their comrades. The orders were given to seize the enemy positions in the estate and, more important, stop any enemy attempts to move along the road to Frankfurt. 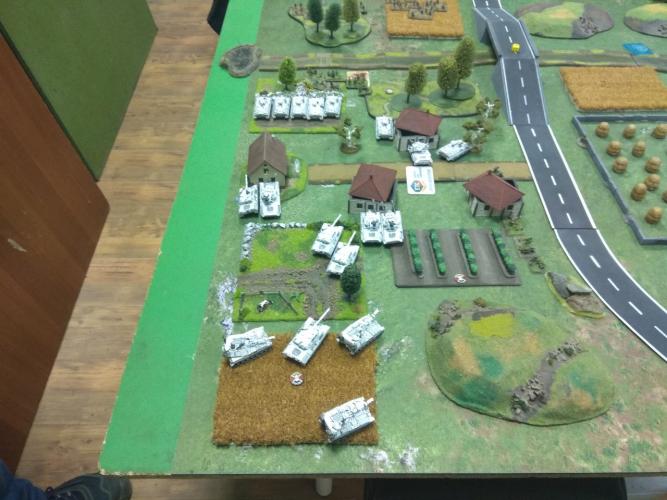 The estate was full of the white tanks, buth those were hidden behind the hills and forests, and not easy to hit. 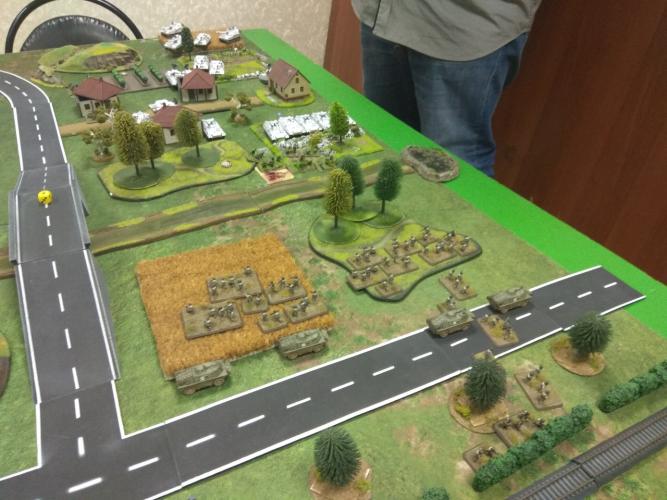 The mot-schuetzen positions were really close to the enemy ones, but assaulting without preparation didn't seem to be a good plan. 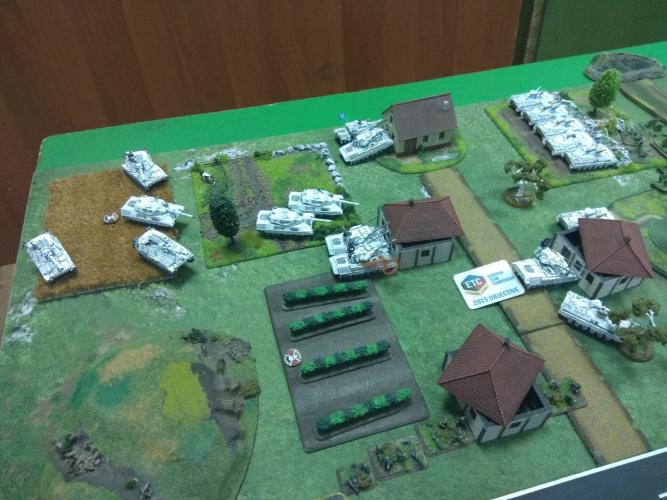 A well aimed shot from a BMP-2 destroyed a Gepard. That was the start of the real fight! 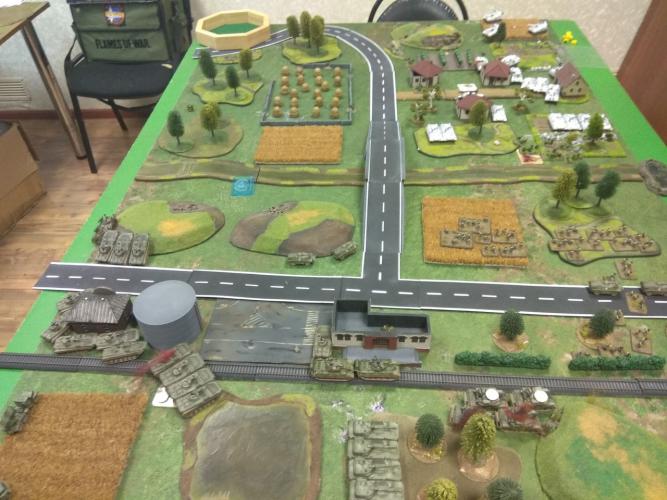 The capitalists answered: a BMP-1 was destroyed with artillery fire, two Shilkas weren't fast enough to pass a dangerous spot and were blown up by Leo-1 sniper shots. 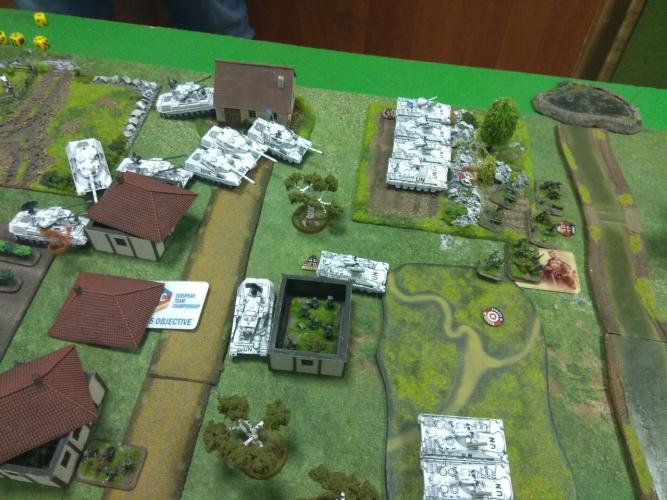 Grads and Gvozdikas started to shell the panzergrenadier positions, but did no real damage. 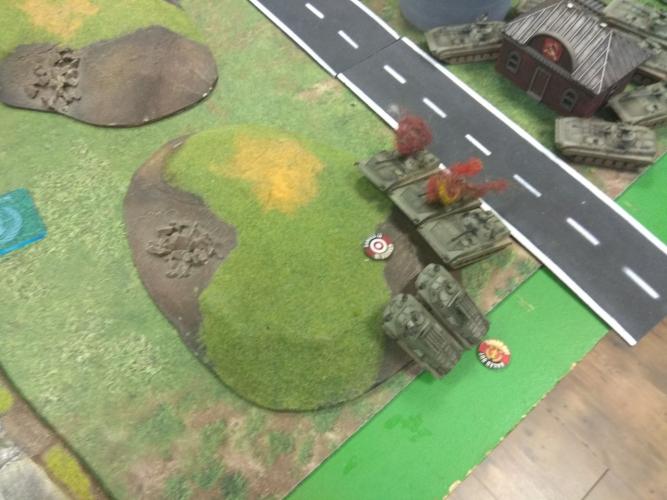 The enemy panzers tried to annihilate an AT group behind a hill, but were not very successfull. The surviving comrades will revenge the fallen friends! 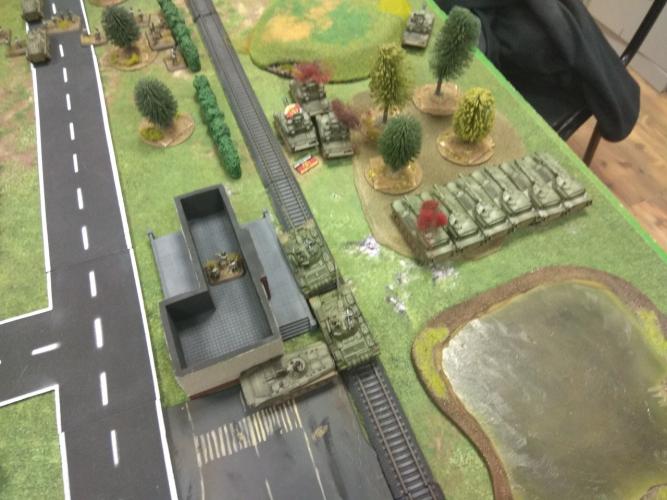 A not that well camouflaged Gvozdika fell prey to an enemy Milan missile. 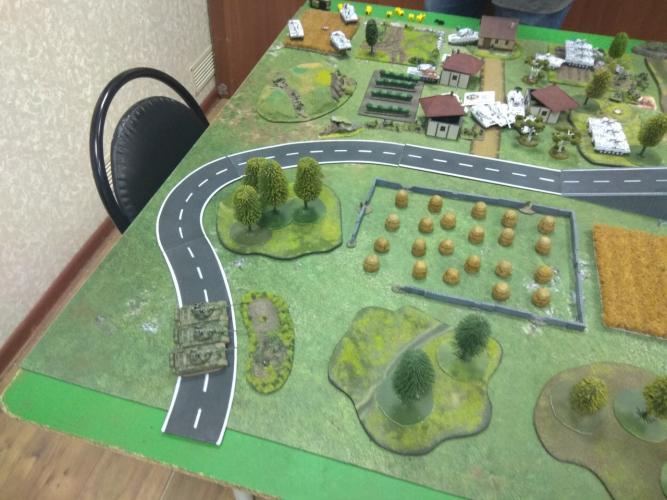 Socialist reserves in form of T-55AM2 tanks entered the battlefield. 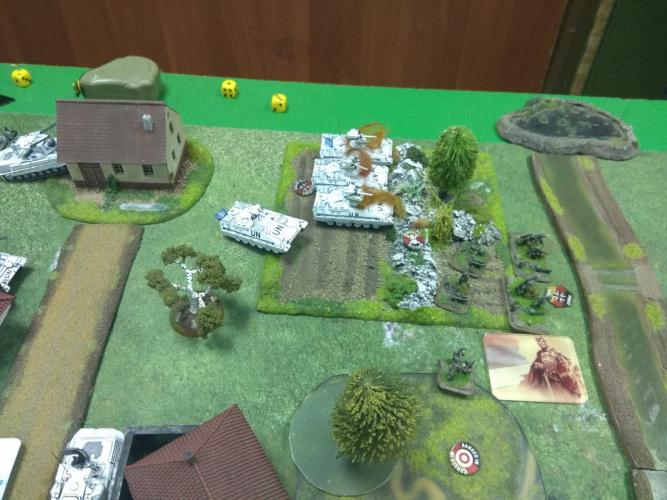 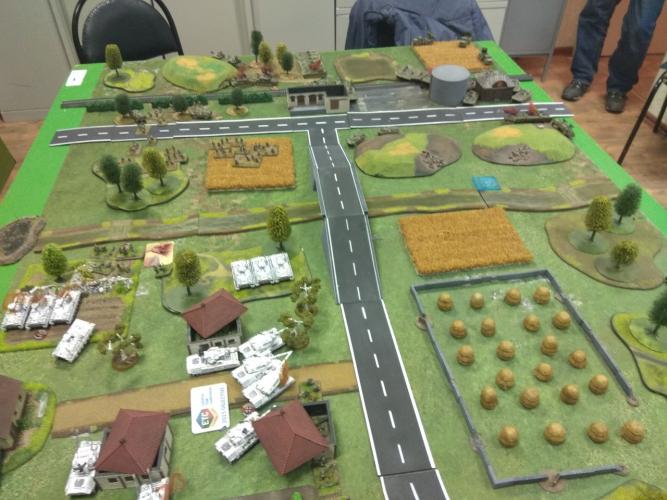 A "peacekeeping" Leo-1 got what it deserved! It would never disturb the peace again! 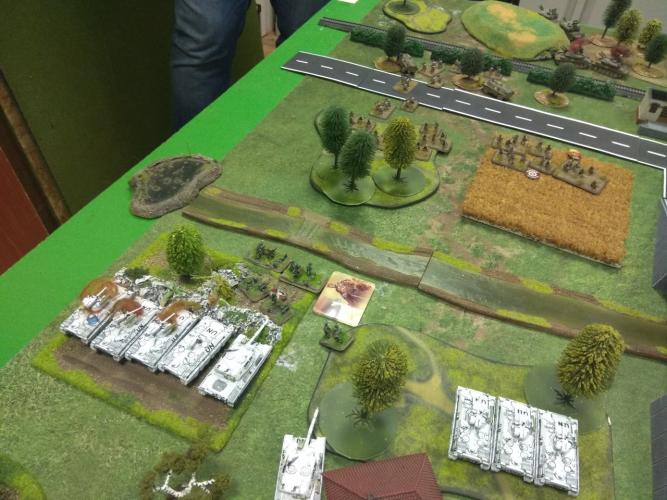 The enemy had to bring his light armour forward and opened artillery fire onto the mot-schuetzen positions. 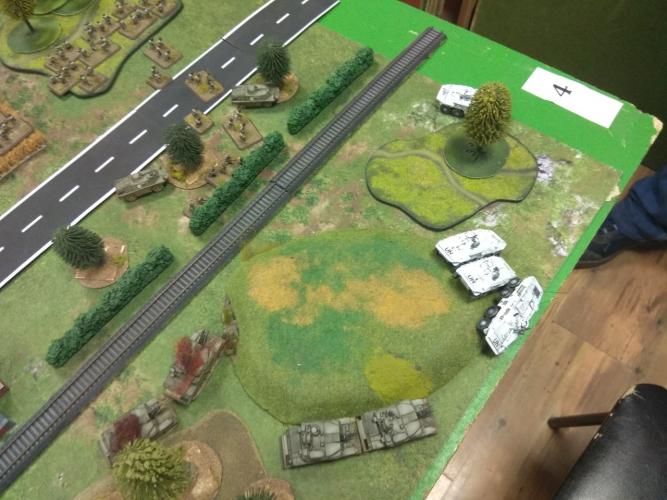 The capitalist scouts appeared, signalling the enemy breakthroug force was approaching the area. 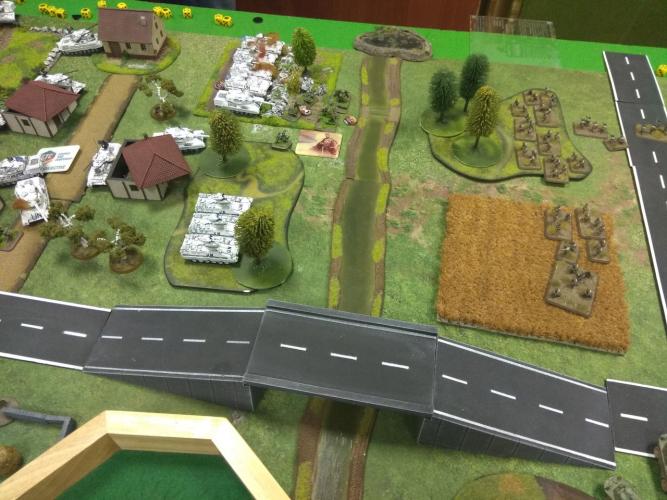 Even with a threat of being outmaneuvred by the enemy, the mot-schuetzen held their positions, steady and confident. 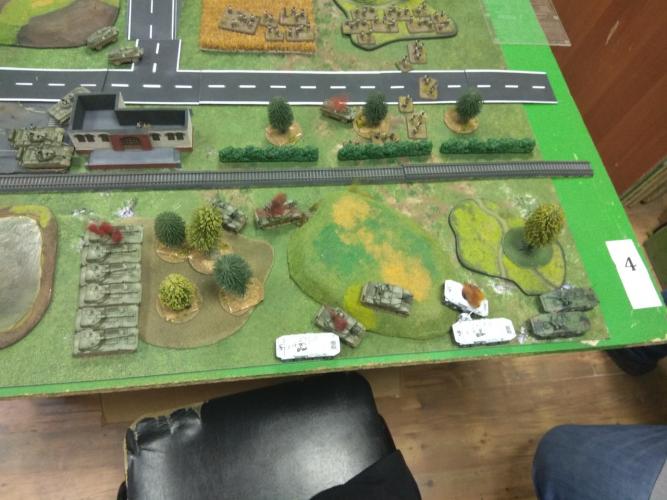 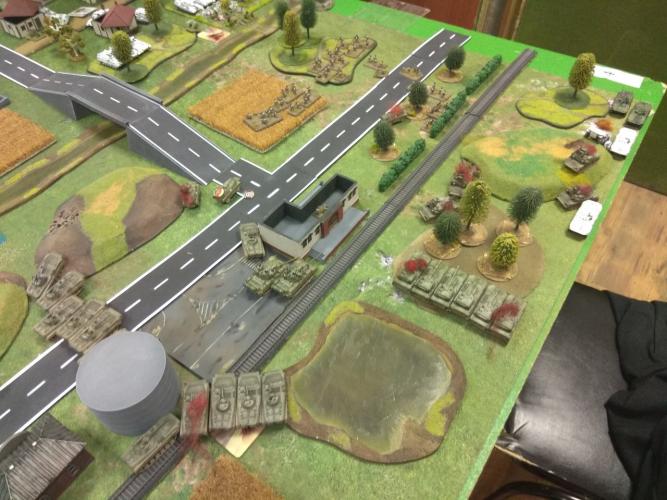 The clashes became nastier, and the sky darker, as the dusk came onto the battlefield. 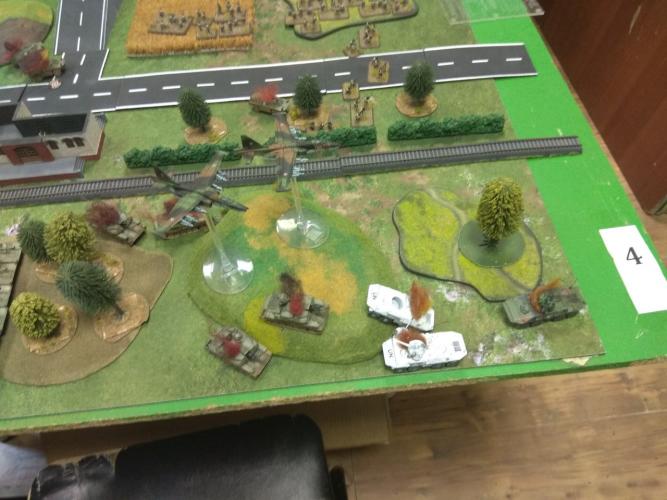 Like two arrows, the SU-25 entered the night sky over the battle, and made short wok of the enemy ACs. The capitalist AA assets were to sleepy to react. 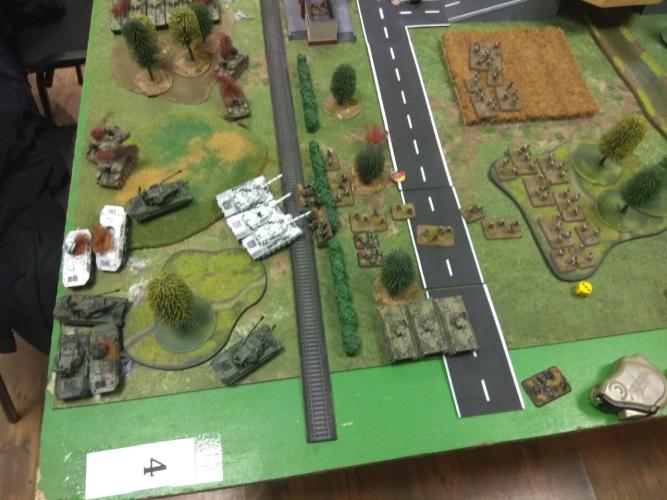 There is nothing kept secret that will not come to light: the main attack of the "white peacekeepers" was supported by regular troops! Never trust a capitalist, comrade! 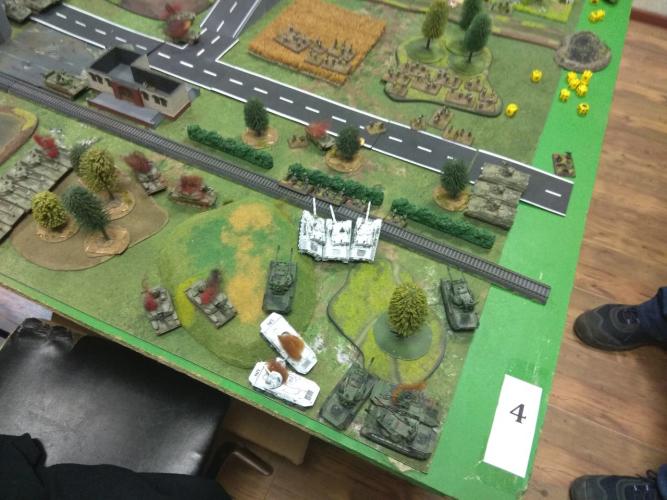 The enemy assault was bloody, and the mot-schuetzen fell back to get a better position. 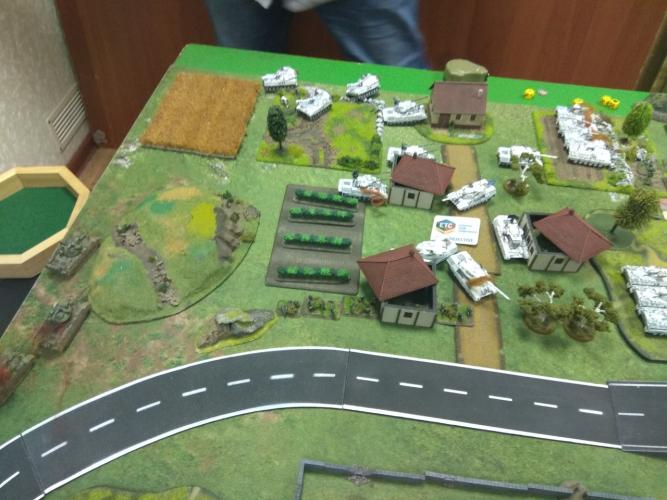 At the same time the T-55AM2s probed the enemy defences in the estate. 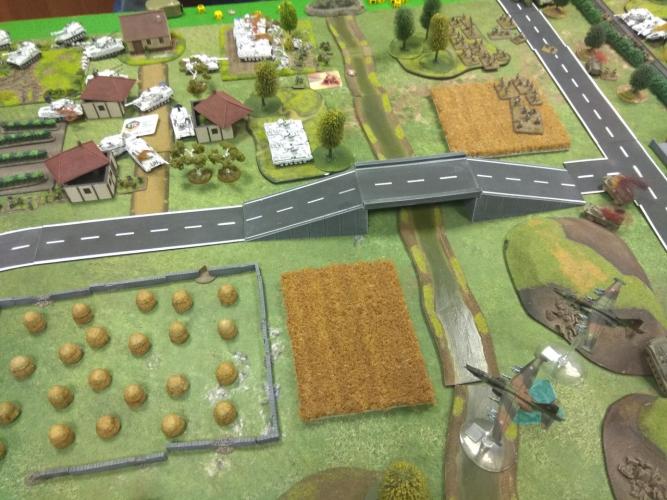 The Leo-1 that opened fire at the advancing T-55AM2s was destroyed with a missile from the SU-25s. 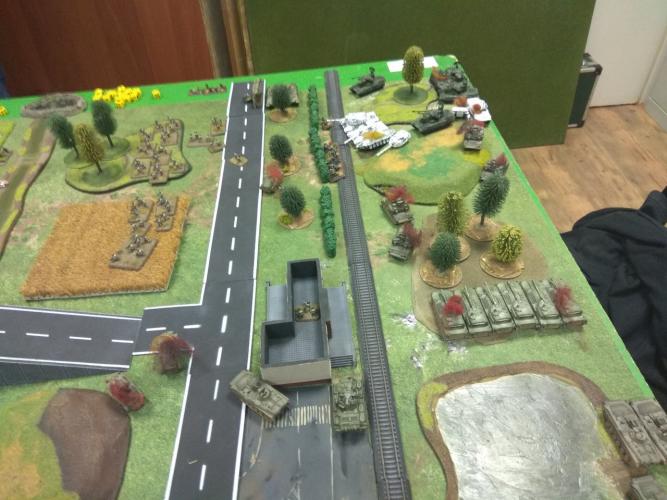 Most of the advancing capitalists found their graves near the highspeed road. That was their one-way trip to hell. 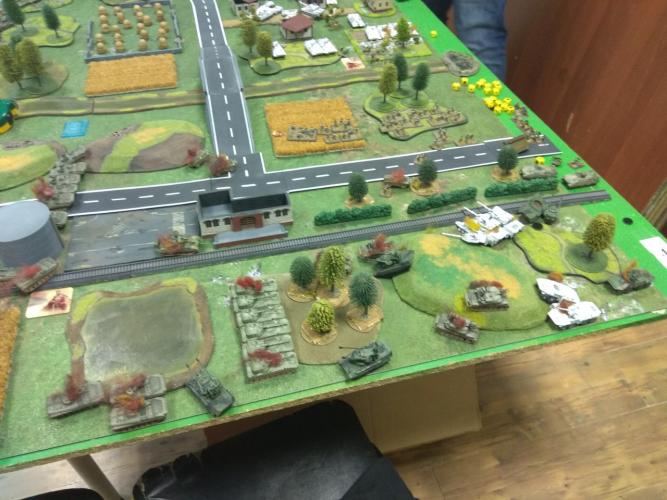 The desperate attempt of the Gepards to break through the peasant and workers defence had no result. The highspeed road to Frankfurt was closed for the capitalists! 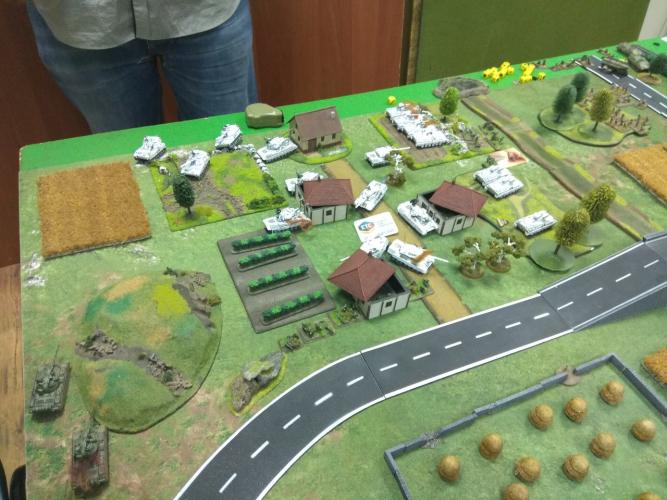 But the capitalist forces in the estate were a tough nut to crack, so it was decided to stop the attempts to capture the estate until morning.