The war of the brothers. 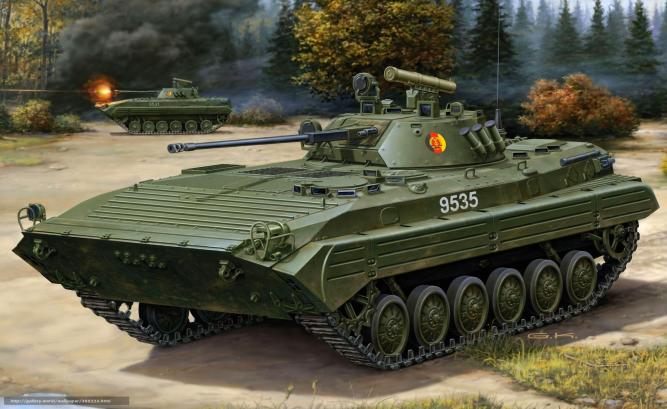 The time is 15 p.m.
Date – 19 August,
Location – CENTAG Mobile HQ, Bamberg, Bavaria.
In the "White Elephants" camp, there was a well-controlled panic. Elsa Bock stood beside her jeep and guided the running staff with determined shouts. Lieutenant Nielsen ran up to her.
- Major! We do not have much time, Soviet tanks will be here for half an hour. -
- Calmly Lieutenant, Colonel Dolch will not let them break through before we leave. - Calmly answered Major Bock. - The last trucks are already sent out Lieutenant, load your people on the APC and go. -
The lieutenant quickly ran to the waiting Marder and his group joined the end of the column retreating from Bamberg.

The time is 18 p.m.
Date – 19 August,
Location – Ansbach, Bavaria.
"Lieutenant, at the next turn we will catch up with the column and will continue to accompany her to Ulm. You also have another task. "
Nielsen heard on the radio.
"You and Captain Olsen will go north to meet the Soviet troops. A group of our allies from the Bundeswehr was cut off by the offensive of the Russians. Your task is to meet them and bring them back to NATO troops. "
Nilsen sighed heavily and acknowledged.
And after 10 minutes after crossing the crossroads his group turned north, to flashes of artillery salvos and waves of advancing Soviet tanks.

The time is 20 p.m.
Date – 19 August,
Location – Marktbreit, Highway 7, the bridge over Main, Bavaria.
"Captain Olsen, send the second platoon along with the Rekon groups, bypassing through the fords to meet the guests. We'll try to seize the bridge for now."
Nielsen commanded on the radio and, dismounting, led his people through the village to the bridge across the Main. 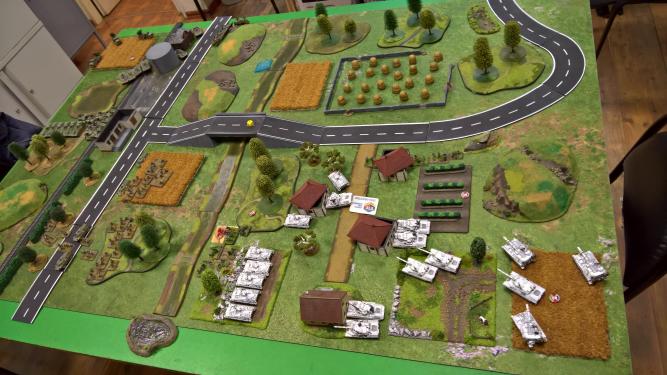 "Heck." swore Nielsen when he saw how many Soviet units block the approaches to the bridge. 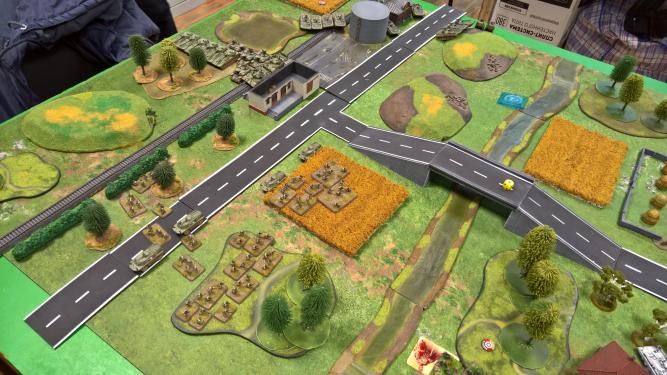 On the other side, the battalion of the Soviet infantry occupied the trenches! 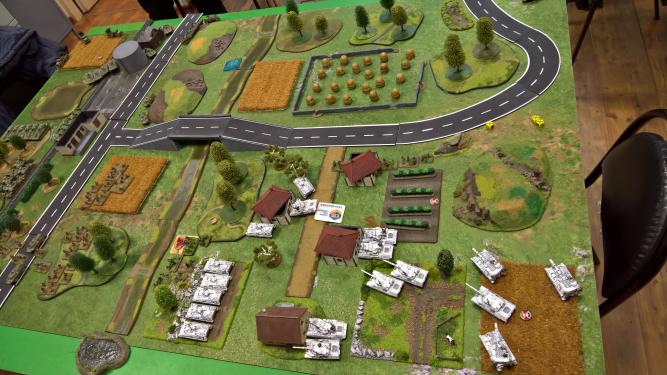 And while Nielsen surveyed battlefields from behind the hill, the first hall of the rocket flew in and one of the Gepards began to burn. 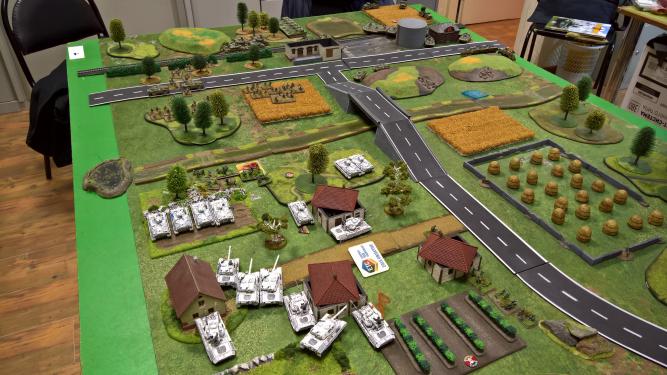 "Movement behind the fence. Damn the left of the Oil tanks are BMP platoon!" Sergeant O'Donovan reported on the radio and launching the first rocket from his Milan. 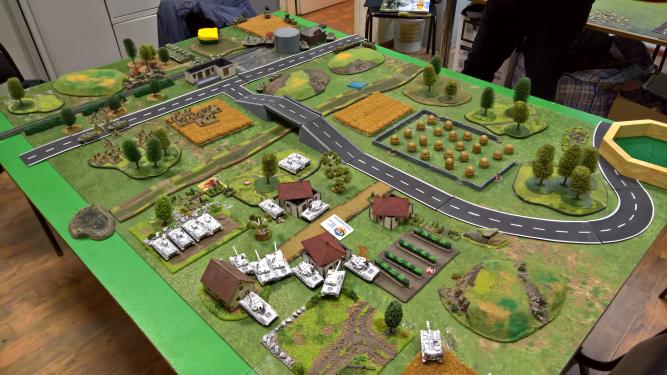 "We confirm the targets. Open fire." Reported by Captain Nielsen and his Leo-1, the fire started blasting the enemy Shilka and the BMP one after another. 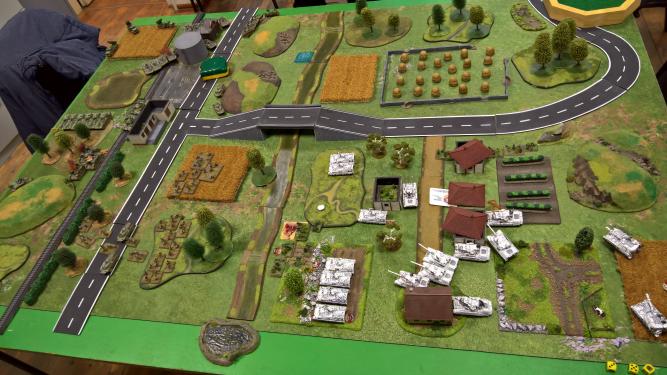 In response, around the Marauders of the first platoon and tanks began to explode artillery shells. 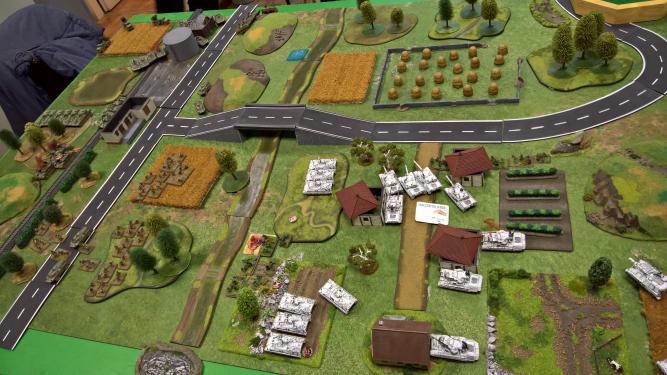 "Let's get on the flank." Reported Nielsen to his platoon Leo-1 and along with them moved to the flank and began shelling the second group of Soviet armored cars. 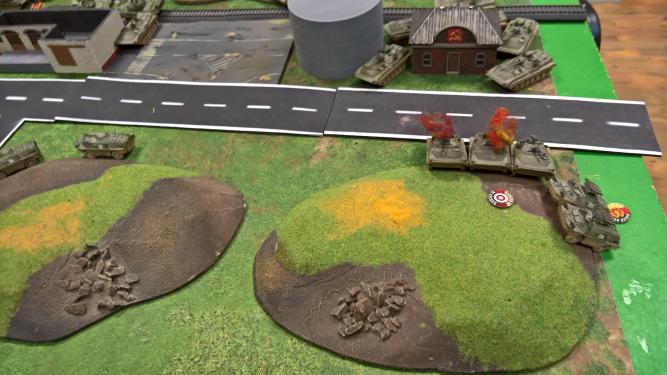 The bombardment of the BMP group was joined by artillery, but the result was not impressive for the entire platoon of Leo-1. 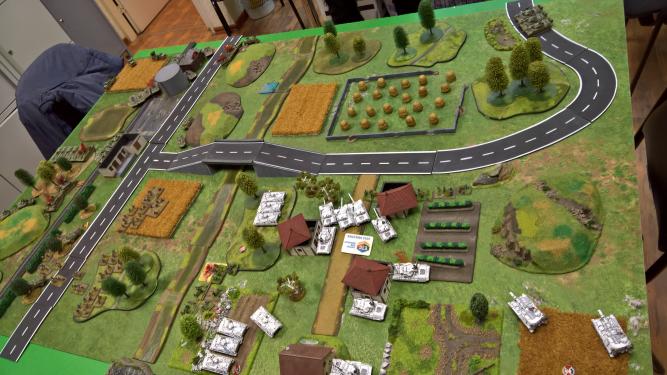 "Damn. Tanks on the right flank." Captain Olsen reported on the radio "We are retreating back to the village" 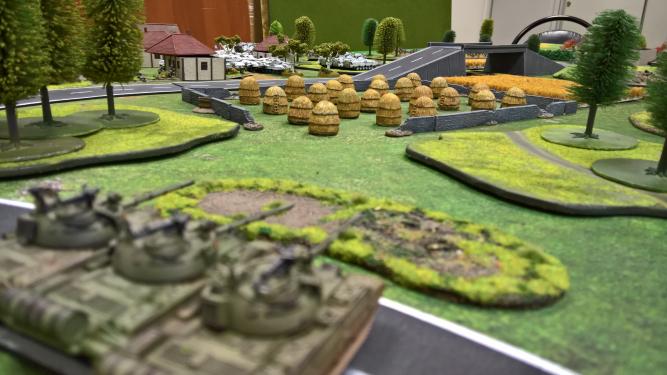 But white tanks in this time played a bad service to them. And the Soviet tanks opened fire. 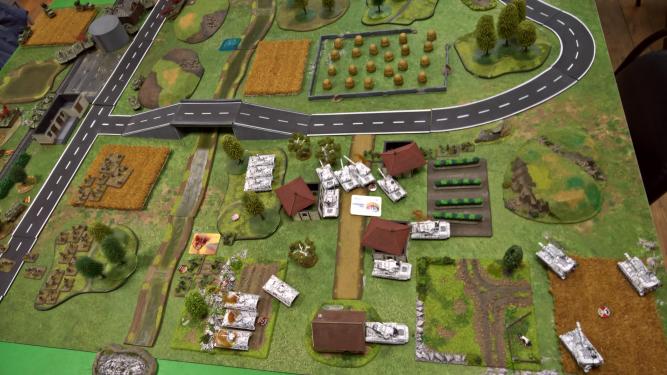 And next to the T-55 Leopard blazed. 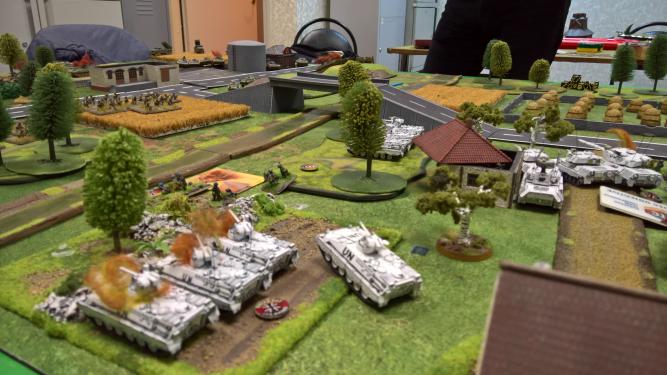 A massive arterial bombardment accurately covered the detachment of transports of the first platoon turning damaging and setting them on fire. 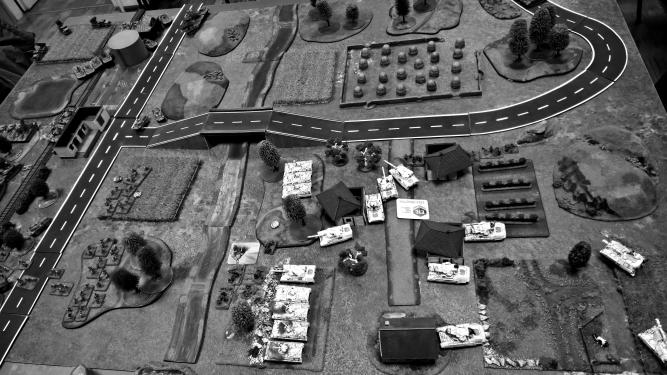 Fortunately for Nielsen and his fighters, twilight fell. 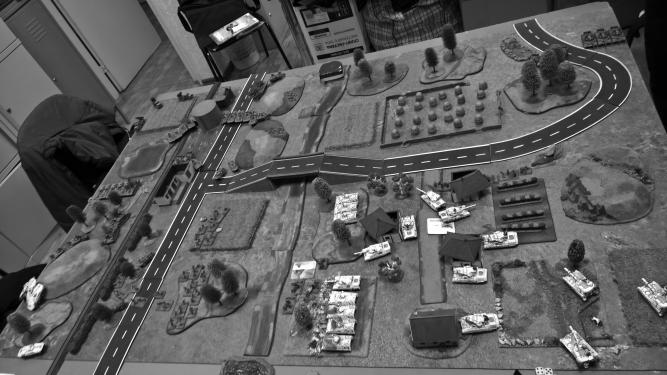 "Reports to the first recon group, go behind enemy lines. We leading the rest. Join the battle." heard Nielsen report on the radio. 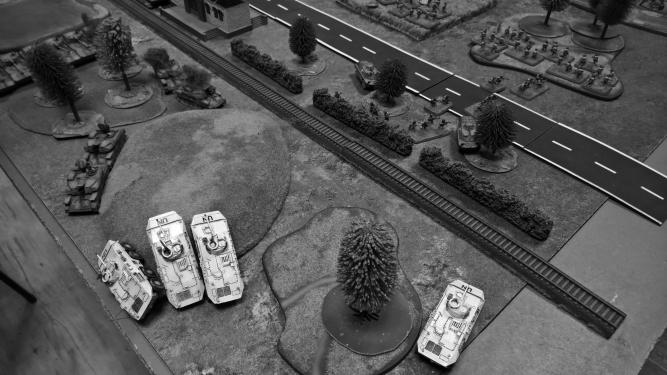 And the group of Luches that fled the flank opened fire. 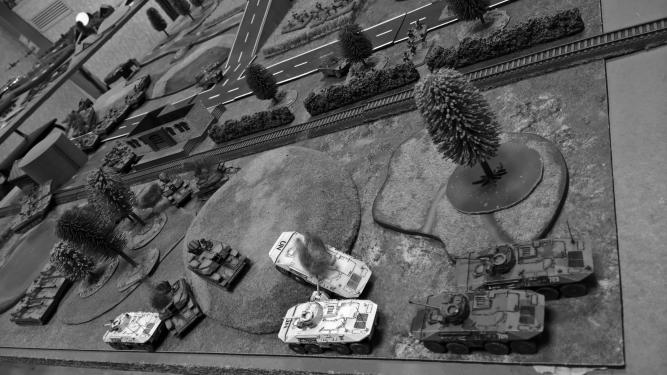 Hell, the ambush. The first platoon suffers losses, we retreat that would find a workaround." Nielsen heard the radio conversations, and here in them the voice is unknown. "Recon Group 26 will support you." We need to get our units out. " 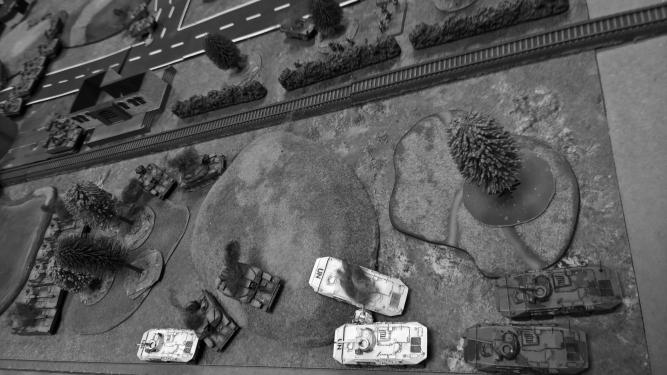 And the newcomers quickly destroyed both Soviet Shilka's. 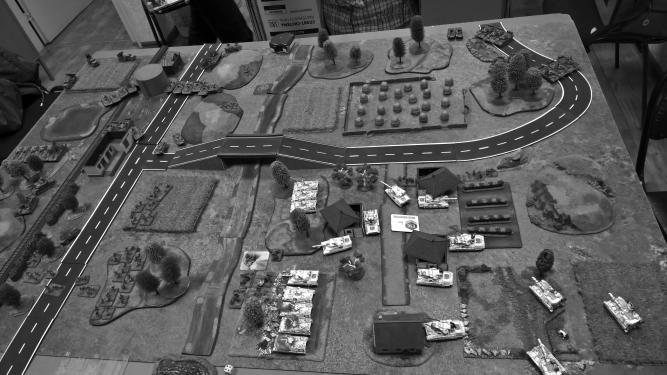 "Let's speed up, there are more and more of them on the right flank, we see the second platoon of tanks." reported on the radio captain Olsen hiding his tank behind the house. 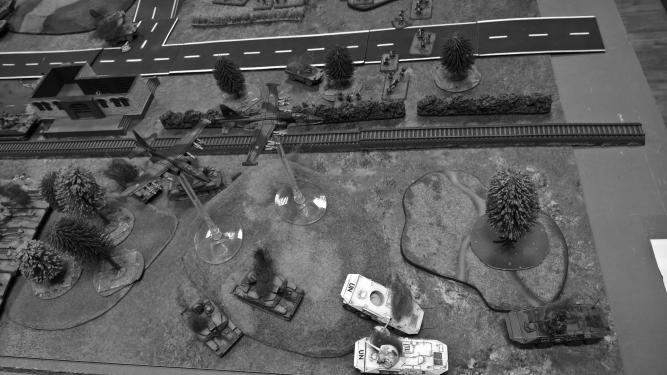 "Damn, planes!" Lieutenant Nielsen heard and the roar of the short-circuiting Su-25 filled the district. To his dismay, the planes launched their missiles and the radio contact with the recon groups was interrupted. 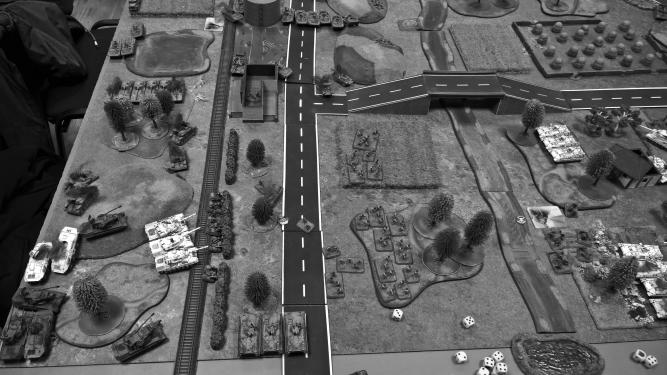 "The second platoon arrived, we are leading the main group of the Bundeswehr.The wounded are sent by another way." And along the road came a Leo-2 detachment, accompanied by Gepard's and infantry on the Mardera. 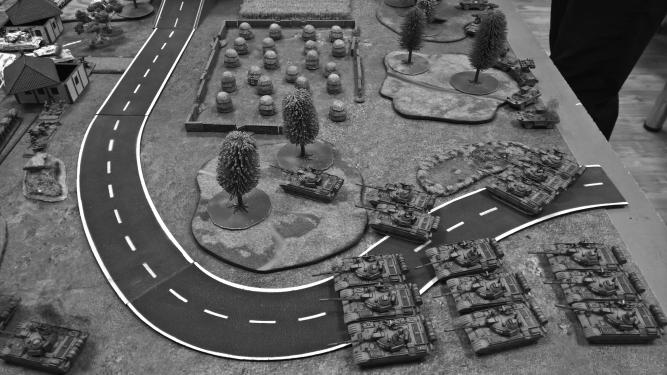 At this moment, Captain Olsen with horror saw a wave of Soviet tanks advancing on the right flank. Their furious fire covered another Leo-1 and he flared fire. 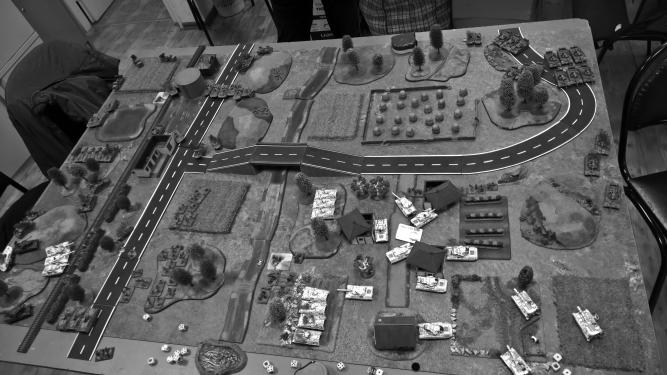 "Back, immediately retreat!" shouted Olsen in the walkie-talkie. "It's an ambush, you can not break!" In the radio, Captain Olsen's voice broke through. "Nielsen, there are more and more of them! They are coming on the right flank! Enemy tanks, more than a dozen." 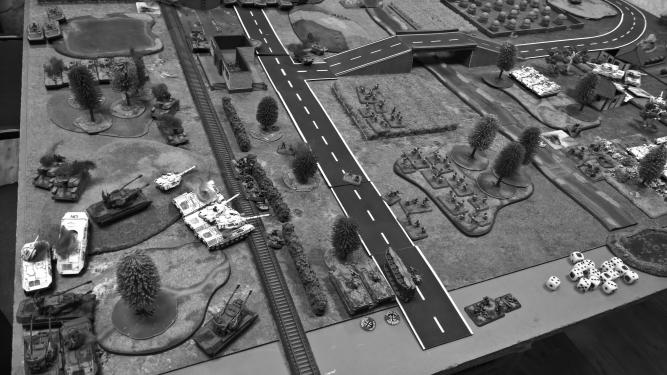 And at that moment the Soviets opened a furious fire at the newly arrived. And the night was the day illuminated by exploding shells and bursts of rockets and bullets. Soldiers of the Bundeswehr began to fall one by one, and Leo-1, of the second platoon, fired with bonfires. 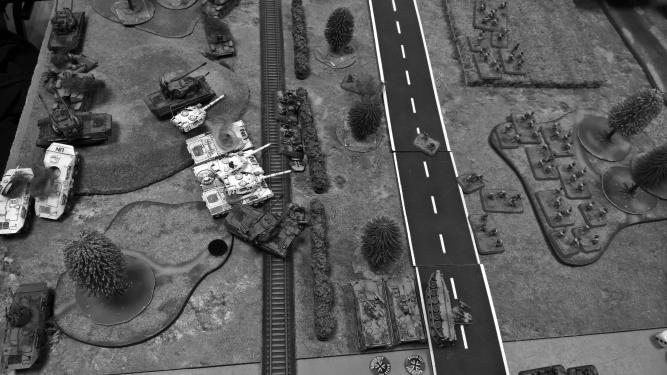 The Gepard's tried to support the infantry but everything was already over. Their fire allowed only a part of the wounded waddling to retreat back. 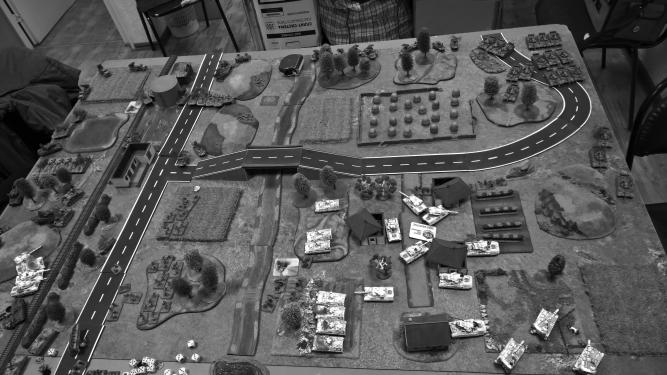 The last Leo-1 second platoon fluttered and the tankmen began to jump out of it. And together with the remnants of the infantry, and covered by Gepard's flew back to the forest. Captain Olsen looked at his two remaining tanks, and reported on the radio. "Nielsen, we're going to be flanked." I recommend withdrawing. "

The time is 22 p.m.
Date – 19 August,
Location – near Marktbreit, Highway 7, Bavaria.
Lieutenant Nielsen ran to the last tank captain Olsen and jumped on it on the run. Captain Olsen, sticking out in the hatch, gave someone the coordinates over the radio.
A minute later he finished and turned to Nielsen.
- How are the guys from the Bundeswehr?
- They lost a third of their combat-ready people and were forced to give up all the equipment that would cross the river. And we lost two tank crews entirely, and three reconnaissance vehicles with crews. - Nilsen answered grimly.
- This is war. It never changes. But we saved a lot of people. - answered Olsen grimly. - but I hope the Soviets will properly strengthen this bridge deference right now.
- Are you glad that a lot of tanks and enemy infantry gathered at the important bridge? - Nilsen was surprised.
- Oh yes, I really hope so. - Olsen grinned wickedly - Three minutes ago I gave the coordinates of the B-52 squadron that were just looking for a valuable target. Look back, put on sunglasses.
And after another three minutes, two officers looked angrily at the huge series of explosions that illuminated the heavens for kilometers around when four huge American airplanes dumped hundreds of tons of bombs on the heads of their recent adversaries.
- I love the American army. They always have a serious argument in reserve. - Olsen remarked sarcastically.
And the remnants of their battle group, under the cover of darkness, headed south towards Ulm.