Stavka have issued the Directive.

Amsterdam must be taken. At all costs.

So I, Captain Simunov, hereby report on the failure of my superior, Major Dailinsky. Fortunately the Major is unable to face up to his crimes as the capitalist swine saw to him during the course of the battle.

With the instructions to break through the weakened mechanised company protecting the crossroads, the Divisional Reconnaissance Battalion of the Taman Guards was dispatched to lead a breakthrough in the Capitalist lines. Attached was a company of our proud brothers in the National VolksArmee with their improved T55’s and some BRDM2 armoured cars. We were fortunate to have overhead cover from four Mi24 Krokodils. Or were, briefly, as the dolts overflew enemy air defenses and were swatted from the sky like gnats.

We were given the order to commence the attack at dawn. Not only did the fools in their helicopters not obey, the Shilkas we had attached thought they could be heroes of the Soviet Union. Enemy light antitank rockets saw to that.

So we lost our air defence AND our overhead cover, all before the sun came up. I know I sound bitter, but the Amis had everything their way to start with. We fought back with honest worker’s ingenuity and the weapons Mother Russia has bestowed.

Some dolt in Frontal Intelligence should be shot for overlooking how strong the Amis were in this sector.

No one warned us of the enemy having four of their new Improved Abrams waiting for us. It was all we could do with our Shturm support unit to take down one of the dogs. Good thing they did too as the T64 platoon panicked when the Capitalists shot their Soviet steel full of holes. I can only hope that the Komissars find those cowardly swine and exact venegance in the name of mother Russia.

Comrades, we fought hard. I personally saw the Ami’s light armoured cars run from the field. After we left most of their vehicles burning all over the field, of course. The terrain was very close and they knew we were coming. The minefields were cunningly sited and it was all we could do to clear one of the three to get the NVA tanks through. We were unable to do much while it was night however.

The NVA boys were amazing. Comrades, you should have seen them dancing through the minefields in their tanks. It was as though they weren’t even there. I’ve never seen such bravado in a workers Army unit. They taught the capitalists a thing or two, let me tell you ! Seeing them mowing down the Ami foot soldiers while through driving over their positions, comrades this brought joy to my socialist heroes. Rockets seemed to bounce off the skirts of their tanks. Such an exciting sight !

My loyal Soviet workers took out two of their mechanised platoons, but it was all done the hard way. First we had to assure their APCs that it was futile to resist the proletariat, then we had to dig out the capitalist infantry with Comrade Kalashnikov’s finest inventions. They will rue the day they ran into the Taman Guards, let me tell you.

So we left many a finely dressed Marine and Capitalist Army corpse on the field but it was all in vain. Comrade Marshal, we fought all morning. For many hours. I know I had to change AK’s several times because the barrel was overheating from pouring so much fire through it. But we failed and for this I regret my actions.

Comrades, I await my fate, I live only to serve Mother Russia. 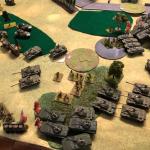 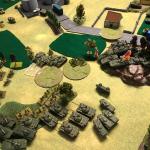 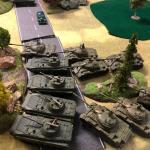 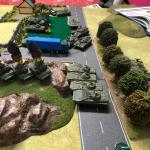 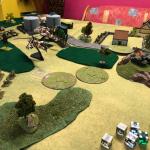 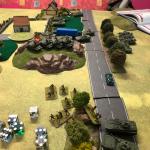