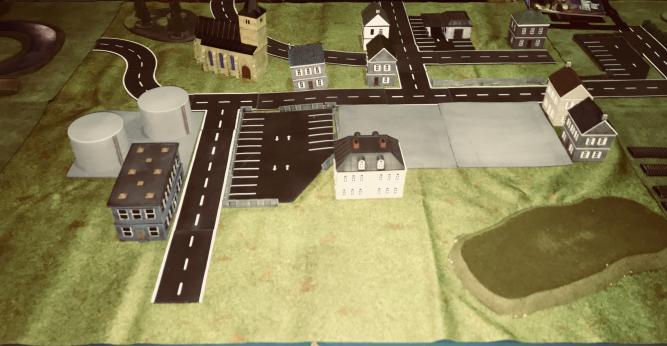 The battlefield; Soviet forces would deploy on the right, with the Germans along the far edge

Captain Yuskev hated cold weather, a rare trait in a Russian. Equipment didn’t work, morale was lower and conditions were never ideal for fighting. As his T-72 crawled across the German countryside, he considered the thick blanket of for that made it difficult to see the muzzle of his tank’s cannon, and all but impossible to see much further. Yuskev’s column closed on its objective, a German steelworks, and while he fully expected resistance he would prefer to be able to see it before he heard it.

“Yuskev,” his radio crackled into life. “Oleg here. We’ve spotted some heat signatures ahead, big. Could be tanks. How should we proceed?” Oleg commanded a troop of ATGM armed armoured cars, and he had ranged ahead while the other recce units covered the flanks. 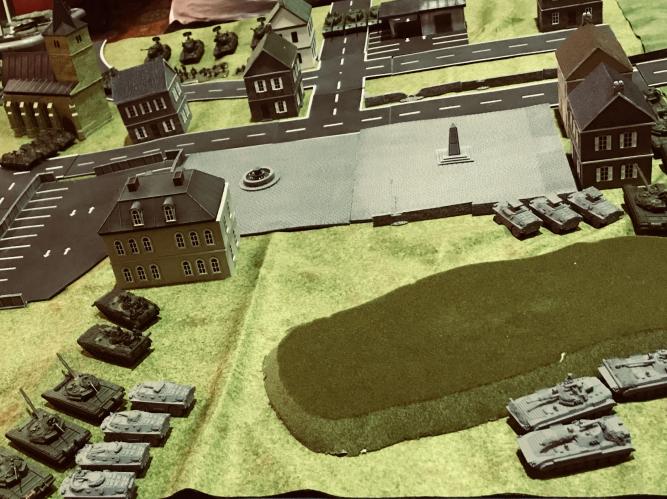 Yuskev’s column moves to do battle

“Find cover,” he replied. “First platoon will join you.” Oleg was no more than a kilometre in front, this could be his company’s first taste of battle since being deployed from the east. Yuskev switched channels, to the company network.

“Contact ahead. First platoon, link up with Oleg’s cars. Second platoon, break left with the reconnaissance screen. Infantry and Shilkas, find cover and stay in reserve. Strike hard, and hold your nerve. For the Motherland!” 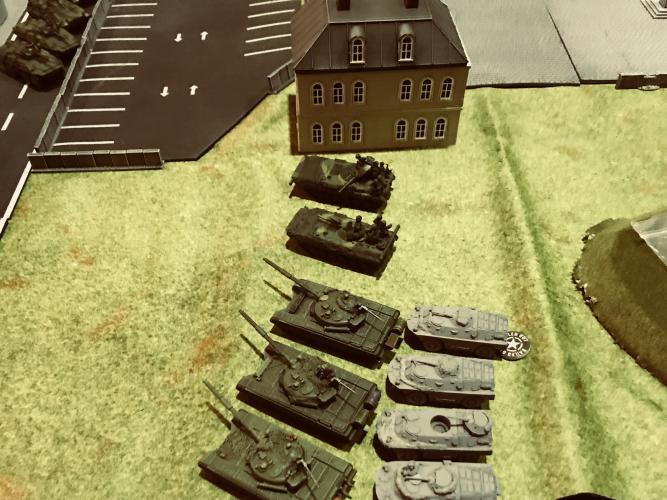 Yuskev was thrown forward as his driver gunned he engine, sending the tank lurching toward the suspected enemy. All around him was a cacophony of screeching steel and roaring engines, and he ducked into the turret and threw the hatch closed as a row of houses appeared out of the fog.

“Incoming!” Oleg yelled across the radio. The enemy had made themselves known.

Yuskev and first platoon had swung right around the side of the houses, bypassing Oleg’s men sheltering behind their ATGM cars, determined to find the foe. Slowing, advancing cautiously, the lead tank stuck its nose round the side of the building, catching several rounds for its trouble. The first shot burst the tank into flames, the rest were overkill, and the rest of the platoon pressed forwards to find the foe, firing on every shadow and heat signature they could see. Soon they were joined by ATGMs, and not long after they were rewarded with burst of flame flashing through the fog. After a moment the return fire ceased, and Yuskev’s tanks continued to crawl forwards. 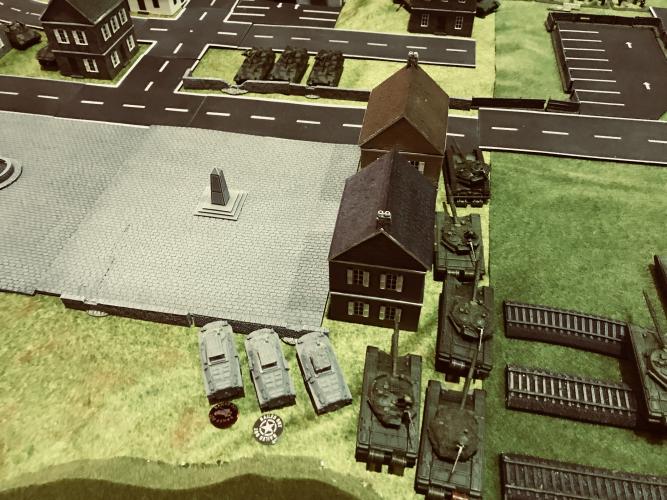 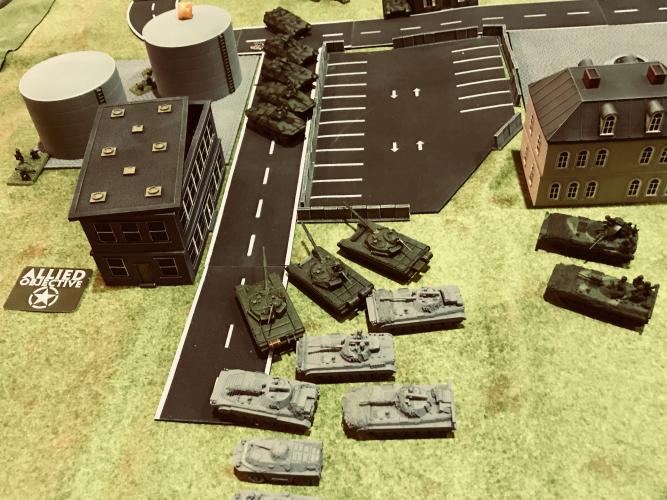 The infantry redeploy to take the objective

Seconds later the enemy returned fire again, ATGMs and small caliber cannon rounds impacted on tanks and APCs all across the battlefield. Loud crumps and jets of flame erupted from Russian vehicles, and many that weren’t destroyed were abandoned by their crew. The infantry APCs had rushed left towards the objective, trying to weather the storm and carry the day. They almost made it, with a single round connecting with the commander’s vehicle and hatches were thrown open as the occupants were chased out by bursts of flame. 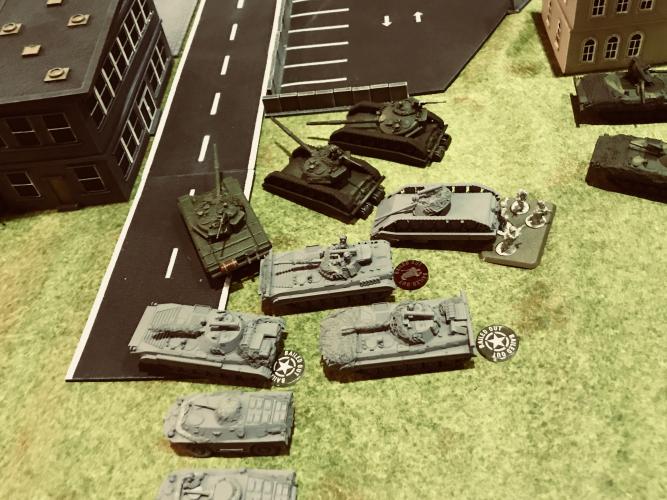 Zdorsky bails out in the face of oncoming fire

Lieutenant Zdorsky picked himself up and ran from BMP to BMP, banging on the rear doors and mustering his disembarking men. All around him oily smoke billowed, carried lazily by the wind, and puffs of dirt kicked up as stray shots pinged towards his position. Confident he had assembled his men, he signalled to the nearest BMP commander to get his attention.

“I want covering fire on that factory, as much as you can!” Zdorsky hated operating on foot, away from his transport and his radio. He felt cut off. Isolated. 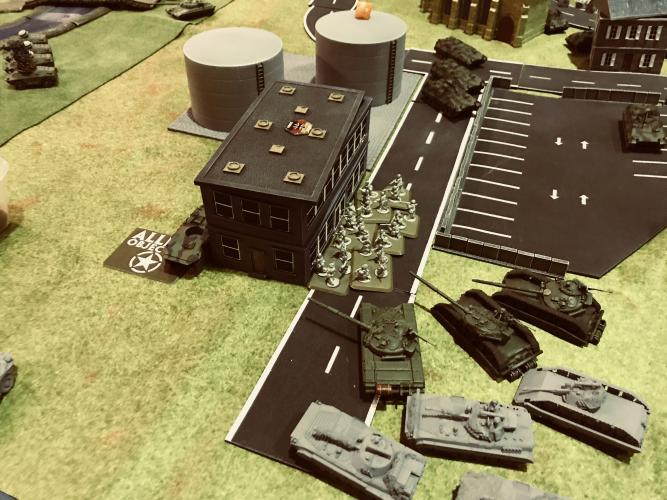 The BMP guns chattered into life, raking the factory, joined by machine guns from the nearby armoured cars. He cocked his own assault rifle and joined the cacophony, darting forwards from cover to cover as his platoon followed behind, laying down fire. The last few meters to the building were exposed, and as Zdorsky broke cover he found himself the target of rifle, machine gun and cannon fire. He didn’t stop. He couldn’t. He jut ran, and by some mystery made it across he street unharmed. Slamming into the brick wall he turned to take stock of his position.

The rest of the platoon had stopped in their tracks, sheltering in a drainage ditch or behind their, now burning, transports and accompanying battle tanks. He waved frantically to get their attention, before indicating that they should try crossing again towards the far side of the building, clutching at a smoke grenade and hoping it would cover them. 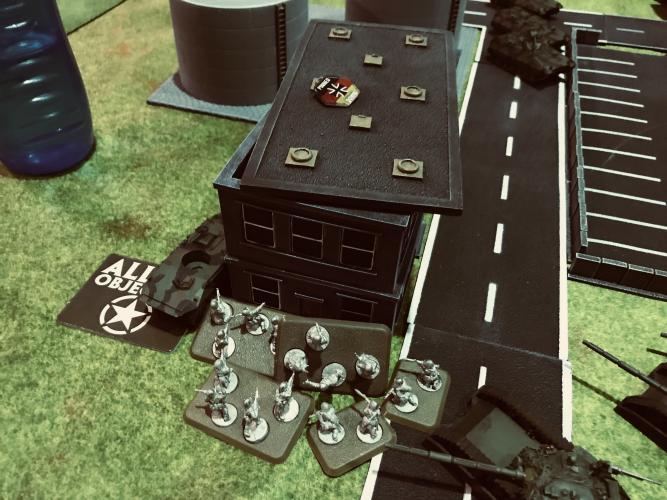 Lining up for round two

Either the plan worked or they just got lucky, but seconds later he was joined by his comrades, relieved to be away from the NATO vehicles and ready to assault the building a second time. Zdorsky slid a new magazine into the waiting port of his AK, drawing back the cocking handle and glancing round at his men. They looked confident. Eager. Ready.

“Attack!” He threw a grenade through a shattered window, waiting for the telltale crump before diving into a world of smoke and dust and noise, firing bursts left and right at anything human shaped as his men followed behind him giving support. The resistance was stiff, with controlled, aimed, shots coming at the Russians from all angles. In the face of this disciplined onslaught, and mounting casualties, the conscripts’ nerve faltered and they retreated toward the door, Zdorsky’s platoon sergeant dragging his protesting officer to safety.

Outside, Zdorsky pushed the NCO off him and did a headcount, at least half a dozen less men than he took into the building a moment ago, but he was sure the enemy had taken similar casualties. All around him thick smoke mixed with dense fog, the noises of battle dying down, the reports of heavy cannon fire were fewer and further between. Zdorsky reloaded his assault rifle and pulled the pin on his remaining grenade, tossing it through the window. 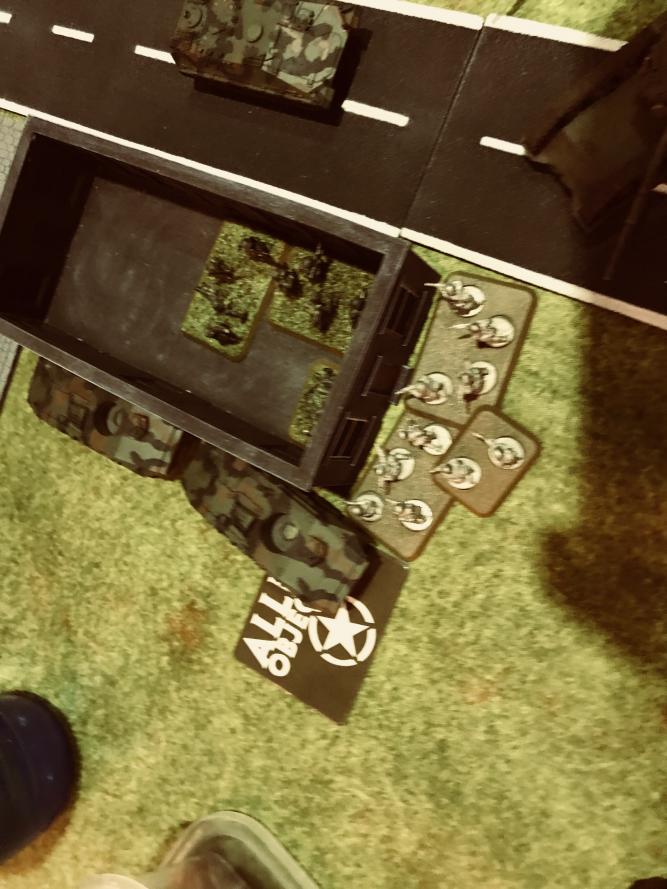 “Again!” he yelled, standing as he shouted and throwing himself back through the window. The enemy soldiers were shocked, for a second, and Zdorsky was certain that he would succeed this time as opened up towards the green drab figures on the other side of the room. Rounds whizzed back and forth, men going down on both sides, and within seconds he was the only Russian left in the room.

Ducking through a hole in the wall he found himself outside, in the shadow of a burning 8- wheeled armoured car. He was down to four plus himself, and he could see a pair or BDRM-2s cautiously withdrawing, their burning comrades left far behind. Zdorsky pulled his last magazine from his webbing, kissing the orange plastic before sliding it into the empty port and pulling the cocking handle back once more. Reaching to his hip, he grasped the handle of his bayonet before attaching it to the muzzle of his weapon. Their confidence was gone now, replaced by fear, but they were ready. They were devoted. Zdorsky took a deep breath. 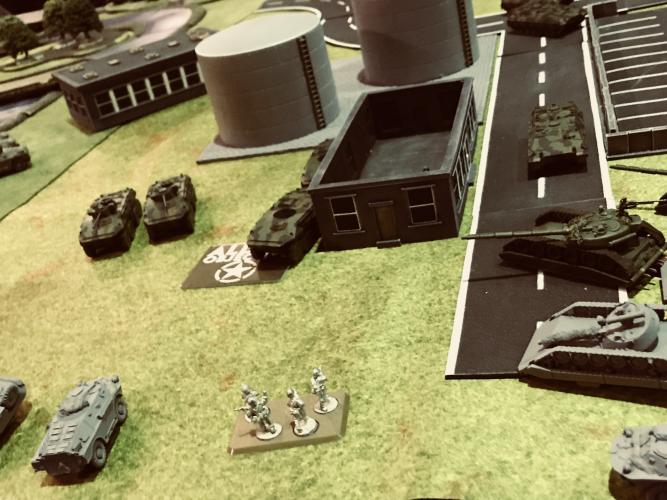 Today was a good day to die