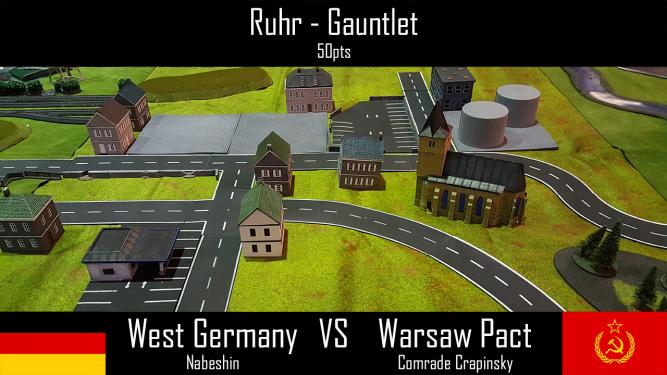 On the outskirts of Oestrich, the weary Panzergrenadiers of 22nd Battalion trudge through the mid-morning rain. They head South, towards their new deployment in the Ruhr having been cut off by the rapidly advancing forces of the Warsaw Pact in the past few days; they are dangerously close to enemy lines. From the middle of the advancing column, Hauptman Obst directs the march of his men and their supporting armour and vehicles. The trek had been tiring for them, but his stoicism allowed the Hauptman to brush aside his fatigue and remain vigilant, a requirement when in range of Red guns. The soldiers skipped the usual playful banter in favour of silence and awareness this time around, the light rain helped clog the atmosphere even further. Tensions came to a head when, to the East, the light grumbling of engines could be heard bouncing from the hills. Without a word, the German units moved forward into cover, Obst kneels in the grass and acquaints himself with the situation.

“The bridge…” he thought to himself. “That crossing point must be what they are heading towards.” The Hauptman knew that this too was where his battalion intended to cross to the get to the other side of the river, he’d just have to fight them for it.

Fumbling at his radio, Hauptman Obst signals his scouts to advance further down the West flank and prepare to take the factory overlooking the bridge. It was going to get ugly. 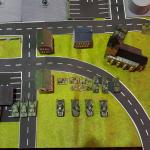 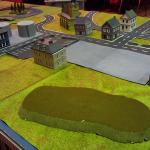 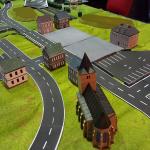 The unmistakable rumbling of T-72 engines echoes throughout the industrial estate, amplified by the walls of the vintage housing surrounding it. Drawing closer, the men could pick up more fidelity in the clamor; other light vehicles, probably scouts and BMPs with their infantry inside. The tracked ATGM Jaguars scamper and hide behind the church while the Marders take a hull down position on the road behind the concrete road barriers. The cacophony of engines grew, until the noses of the advancing machanised platoons peeked from behind the hills. 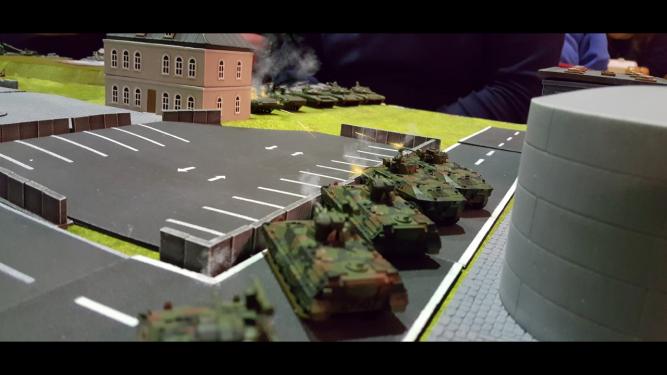 The Marders opened up with their 20mm cannons, halting the advancing BMP scouts, bursting one at the seams. To the East, a T-72 platoon darts to cover behind the housing, creeping up on the flank of the mostly unaware panzergrenadiers. At that moment, the hunters had become the hunted; the Leopard 1s lay await in ambush, guarding the flanks of their wards. One dashes to the far building to fire down the line of tanks, sinking a round into the turret ring and popping the top clean off. 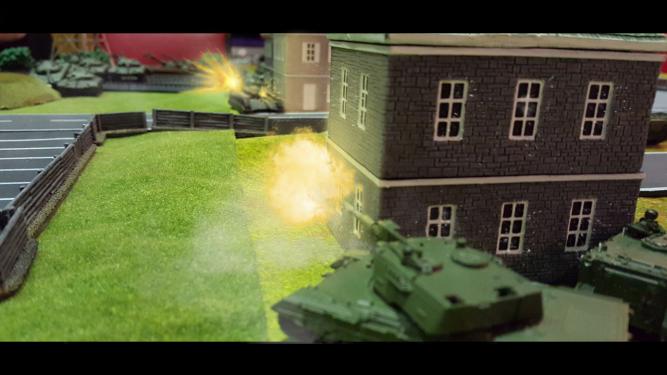 Yet still, they come

Soviet morale had gained some legendary status in amongst the Bundeswehr, shrugging off the most brutal of losses and continuing their advance, indefaticable. To the Germans, this rumour would gain solidity in their minds at the very moment the rear T-72s begin rolling over the burning husk of their comrade, crunching the scrap metal beneath their treads. 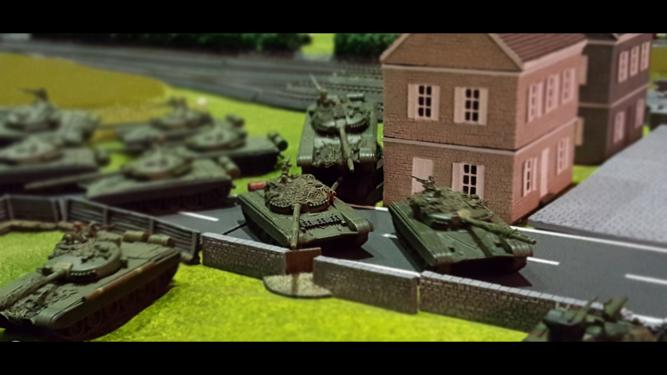 The rest of the BMPs and BDRMs speed on Westward under cover of a supporting T-72s, sounding their cannons in unison, and felling one of the infantry transports. German artillery leads their shots and crushes a transport with their HE, the shell-shocked troops stumble from their vehicles. The Jaguars behind the church guide their HOT missiles straight into the paths of two T-72s going full speed, their hulls shatter and slide to a stop on the wet grass. Meanwhile, the T-72s to the East return their attentions to the fight. As their guns peaked over the wall, the thoroughly shaken Leopard 1 company drew their last gasp as several 125mm rounds punched through their paper armour, reducing their second line equipment into a junkyard fire. 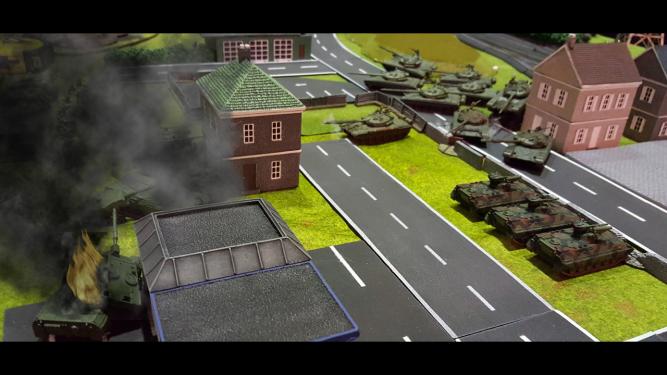 Under machine-gun fire, the panzergrenadiers hop into the factory building safely, excecuting their Milan setup. From the broken windows they push the business ends of the RPGs outside and, with a click, volley several rockets into the oncoming BDRMs, halting one of them. The Luchs advance with them, their brakes screeching as they stop short of crossing the factory. There, they exchange mutual fire with the remaining BDRMs, rounds narrowing crossing the hull of the reckless BMPs adjacent to them. The sheer volume of fire from the 14.5mm machine guns were simply too much, tearing open the front compartment of the Luchs. With no way of pushing forward, the scouts begrudgingly leave their protective vessels behind and dash to safety. 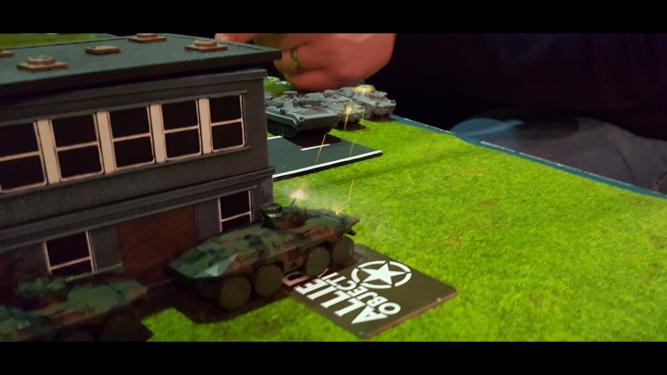 With the Leopards gone, the safety of the supporting light armour for the Russians was almost garuanteed. Shilkas and Spandrels trundle into position on the hill side, ready to engage their foes on the flank. Hauptman Obst, however, remained carefully observant of the situation, awaiting his time to strike. With a swift arm movement, he beckons his Milan attachment to fire on the exposed T-72s. Wires whiz by the heads of the Russian tanks as the shots fly wide, but take their attention from the remaining Marders, now closing on the light vehicles across the square. The IFVs and artillery’s guns spoke, but the Russians did not hear their words; two of the Spandrel teams dove from their vehicles, hitting the mud beneath them only to return to their stations before the guns had even fallen silent. In return, one Spandrel locks-in a Marder, the missile erupting and blinding the nearby crewmen as it connected with the transport’s fragile frame. 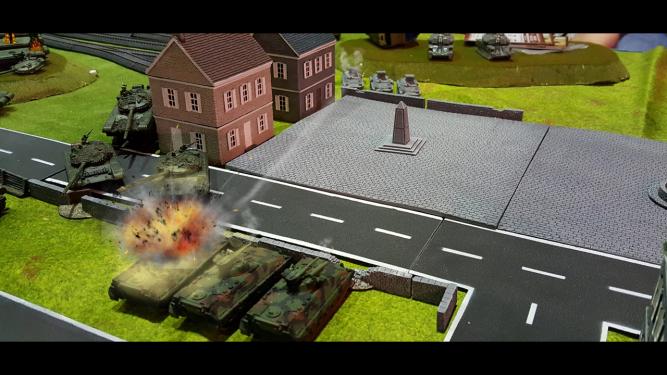 The basics of CQC

The German artillery remained resolute in it's purpose, firing wave after wave of rounds into the on-coming light-armour. With the aid of the Marder IFV and Gepard AA, Ivans numbers began to plummet. Shilkas, Spandrels and BMPs were slowly but surely ground to fine metalic shards by the combinatorial firepower. Obst and his Milan teams were restless in their efforts to stop the T-72s to the East, their HE rounds blowing chunks from the walls and roof of their building, collapsing the back half with an earthy groan. Finally, a decisive blow; their commander's tank clatters and rolls across the asphalt when a Milan soundly strikes their top armour, sending the remaining tanks into a frenzied retreat. The West Germans held their Eastern flank, and now all that remained was to secure the factory.

However, for minutes the fighting their had been quiet, the occasional pattering of small arms fire. Amidst the smoke, the entrenched panzergrenadiers could not see anything, only the hissing wrecks, yet they knew their enemy was still out there. Abruptly, the silence was extinguished by the hoarse cries of battle, followed by the clatter of AKs and mounted machine guns. 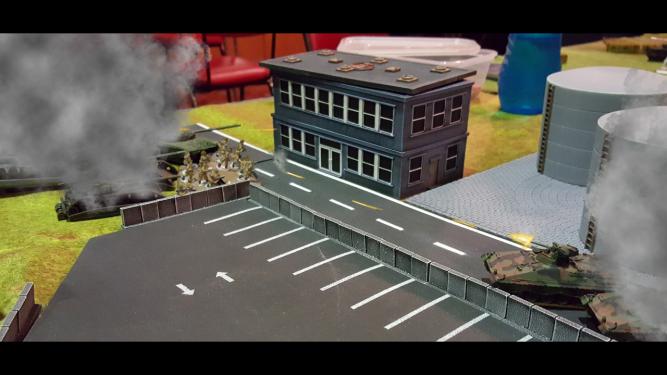 Russians began pouring from the empty space between the battle debris, their boots clicking as they trampled over the scrap, making a b-line for the factory building. Their charge was unhindered by the spattering of cannon rounds ahead of them, nor the clink of grenades at their feet. The German’s yell in panic, returning fire to the closing mob, cutting down a few men, but not enough. RPGs and grenades were thrown through every window, and bullets through every hole smaller than that. The gunfire ceased for just a moment, as the first and most courageous of Warsaw Pact’s men began vaulting the windows into the building. Deafening close-quarters gunfire traced from room to room, dust pinging from the walls into the faces of the heer as the concrete and drywall tore up in front of them. Even through the ringing of their ears, they could hear the thump of the man behind him falling to the ground, they were losing numbers, but the Russians were losing more.

Keeping their cool, the Bundeswehr use their lack of numbers to their advantage, utilizing their nimbleness to nip through fire to adjacent rooms, flanking the main corridors and slowly wedging the invaders into a corner. Rifle fire continued, but dried up as the under-equiped Russians, who had spent their explosive munitions in the raid, took frag after frag into the adjoining rooms that they had occupied. Rapid-fire had petered off from the opposing side, left only with the noises of cracking glass; the Reds had gone back outside. This was an unfortunate tactical blunder for them as the Gepard and Marder detachments had lay waiting outside, and as the Russians jumped from the windows, they fell squarely into the arms of their enemy’s machines. The 35mm cannons cracked to life and in a moment the opposing force was cut down, whatever foes remained to witness this hastily removed themselves from the battlefield, leaving nothing of their own behind but bodies and flames. 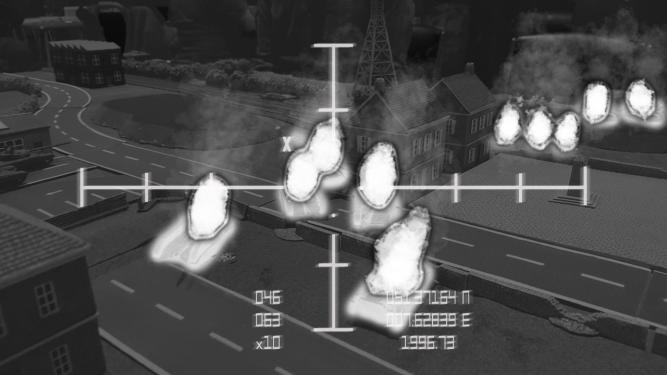