OK sports fans, today at the ball park was not a good day. Nuke La Luge had a bad outing on the mound today(movie reference; Bull Durham) Today was a very ugly loss for the home team, Nothing went right…. it was all left.
My original line was changed again as I chose 3 Leo2’s, a Inf Pltn , 2 PAH’s, 3 morsers and 2 Gepards, 2 fliegerfaust(Subing 2 WW2 88’s for 2 Fliegerfuast).

Turn 1 went very fast as I started to take out a heavy BMP Pltn – I hit 1 vehicle. That was it for the moving, shooting, and assault.
My opponent maneuvered into place, moving around my left flank. 2 shots took out a Leo2 and a PAH, the other PAH hung around.

Turn 2 was even faster, I moved the Leo2’s to the left to face the on coming BMP Horde – During the shooting, ALL SHOTS MISSED, except for my air strike from the Tornado’s took out several stands of Inf.
My opponent moved even closer on the left, but I was lucky as he didn’t receive reserves. BUT he’s shooting was on the mark as he removed both Leo2’s and
loan PAH.

Turn 3 saw my Morser’s come on the board, RIGHT IN FRONT of the blitzing BMP Horde, Lucky me!! I moved the Gepards up in front of the woods. Shooting was
nil as I had no line of sight to any targets, EXCEPT for my Tornado which took out several stands of INf and pinned the unit.
My opponent brought in his last reserves on a great roll, which would eventually bring my demise. Another BMP Horde moved on the right flank and took out the Gepards.

Turn 4 was called do to rain, Steel Rain that is. With nothing left to really hold off the coming assault, the CO decided it was better to fight another day that to try and make a Heroic stand. 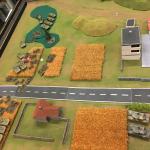 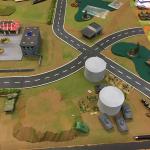 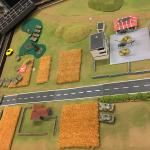