Our club is using 64pts as a default for this Firestorm Stripes campaign.

When Chuck and I sat down Thursday March 15th to pit my BTR-60 Motorised Infantry force against his British FV432 Company we had to choose an area for the fight.

It seemed natural for us to pick Hanover and allow my Soviets the opportunity to crush this stubborn redoubt!

On the campaign website we saw the “Hanover Contact” mission, printed it off and decided to give it a go. The only changes from “regular” Contact seemed to be that the Brits get two ambushes and the Soviets get to re-roll one Reserves die each turn.

I chose to start off with my two BTR companies, the BRDM-2 Recon and the Acacia Heavy SP so as to get the offensive going early, hoping that the defender would delay fielding their Harrier jets until my AA assets arrived!

Chuck had 9 units in his force, so with 4 on and 5 in reserve he elected to deploy his two FV432 units and have the Chieftans and the Spartan Milan unit in ambush. In reserve was a Blowpipe unit, a Rapier unit, a flight of Harriers, an Abbot Battery and a Scmitar Recce unit.

Since his Recce did not show up to deny me no-man's land I moved the BRDM-2 unit up along the center and left and grabbed the highway up to the bordering hedge with both BTR companies. All that was left to do was march forward and overwhelm the single platoon guarding the left-hand objective!

On my right the BTR transport was deployed to guard against Chuck moving up his infantry to threaten the objective on that side. 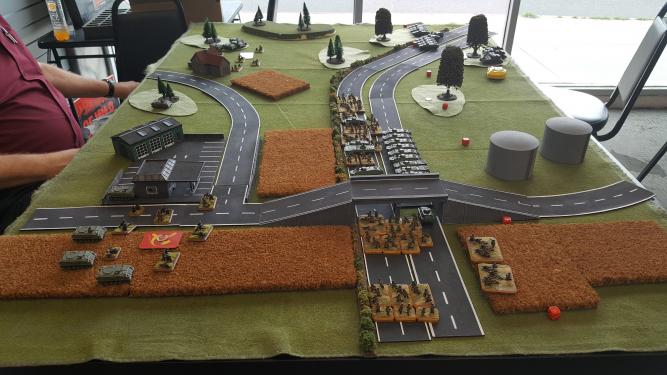 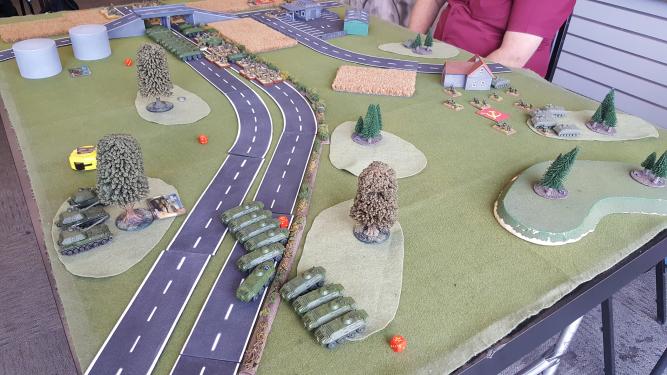 On my first turn no reserves were received but both infantry companies moved up to prepare an assault and attempt to destroy the FV432 vehicles backing up his infantry. Two carriers on the left were destroyed with Spigot fire and one on the right with pre-planned artillery. 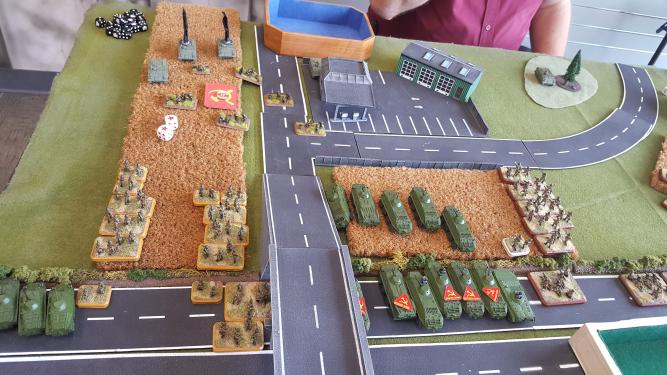 Chuck's riposte was to unleash both ambushes, the Chieftans directly on my left flank and the Spartan Milans in the centre wood. As well, his FV432 carries backing up the right hand flank moved out to start machine-gunning my centre company.

The Chieftans concentrated on machine-gunning my advancing Soviets whilst the mobile and infantry Milan teams started to whittle down the BTR-60 vehicles. This fire pinned down both companies and caused a few casualties but it didn't seem overly effective. 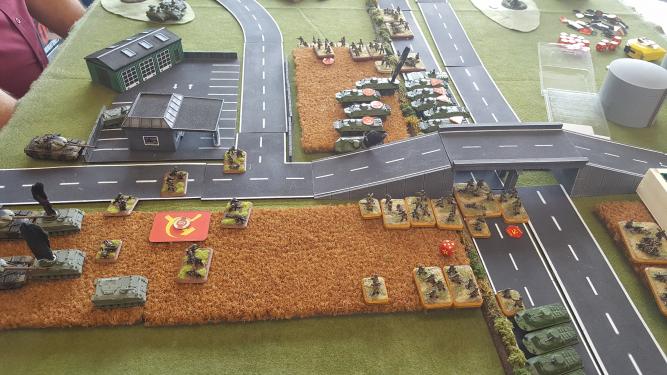 My second turn started badly since my centre platoon failed to unpin despite exhortations from the formation leader. At least the T-64 unit did show up, which I deployed on my left flank to snipe at his Chieftans beyond 40" range. Unfortunately all my fire could accomplish against his tanks was to bail out a Chieftan which promptly remounted. My Krasnopol fire did hit two teams but Chuck managed to save both of them, even re-rolling! I did destroy his left-hand FV432 unit, kill one infantry team and pin the rest with the rest of my fire but my infantry was now dangerously exposed. 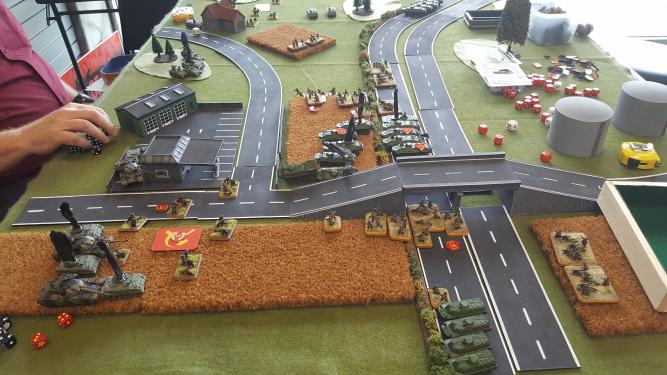 On Chuck's second turn he elected once again to hose down my advanced infantry, the centre one had succeeded in digging foxholes whilst pinned but the left hand one hadnt and was exposed. Machine gun fire from the Chieftans and the GPMG teams killed three more teams and pinned them again. Milan fire further whittled the BTR-60 unit but it still had more than half the vehicles available.

On my third turn I got one reserve and chose to run the Shilkas straight up the highway to provide fire support. The left hand infantry company failed to unpin but the right-hand one moved up to assault the lone Milan team in the gas station.

My artillery again attempted to hit his left-hand infantry with Krasnopol rounds but whiffed, the T-64 tanks whiffed against the Chieftans, and the centre Spigots whiffed against his mobile Milan teams, only destoying his Observer carrier.

The left-hand infantry again failed to dig in, but fire from the BRDM-2 unit, the BTR-60s and the Shilkas pinned and caused one casualty amongst his infantry. The assault against the gas station was successful (after losing one stand to DF and two to counterattacks) but at least I was now poised to attack the objective. 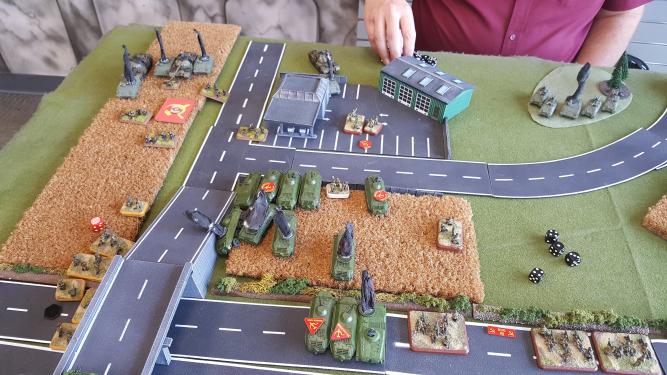 Chuck didn't get any reserves on T3, but he did unpin his infantry and succeeded in causing several casualties against my exposed infantry. He also moved up his Chieftans slightly and knocked off one T-64 and wiped the Shilka unit out with them and Milan fire.

For T4 I was able to get my remaining three units on from reserve, but the centre infantry again failed to unpin. At least the left hand one stood up and charged! Unfortunately the smoke bombardment which was to screen my assault fizzled, and even an assault that minimized return fire from his pinned infantry was thrown back. 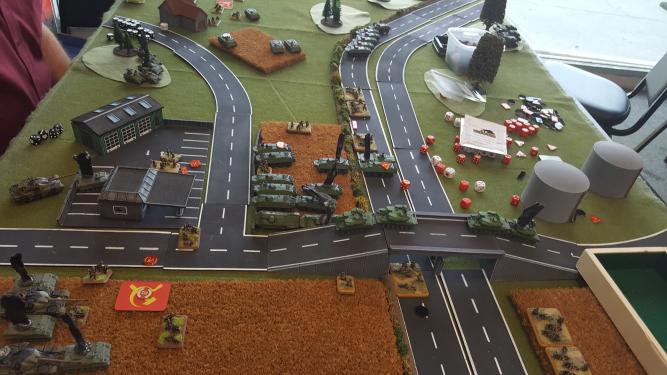 On Chuck's 4th turn he brought on his Scimitars to help provide machine-gun therapy but they arrived in the wrong corner. Nevertheless his fire whittled the left-hand company down to the point that only two teams were in command distance and they naturally failed unit morale! "Poof" went my remaining BTR-60s on that side.

At this point time had run out for us to complete any additional turns and so we ended up with a 1-3 draw. 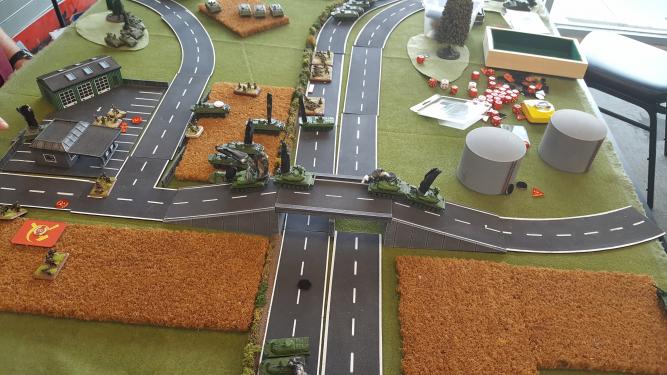