Peacekeeping contingent in the Congo. Date of formation 01.01.1984, number of the resolution of the UN 545.
Tasks – the separation of the conflicting military groups in the newly flared Congo civil war.
Commander – Colonel of the Bundeswehr Phillip Dolch
Composition – two tank, two infantry, and one reconnaissance battalion allotted from the Armed Forces of Denmark and Germany.
The unofficial name – the battle group “White Elephants”
17 August – the day when they appeared in Europe.

Read the previous parts of the story in my profile. 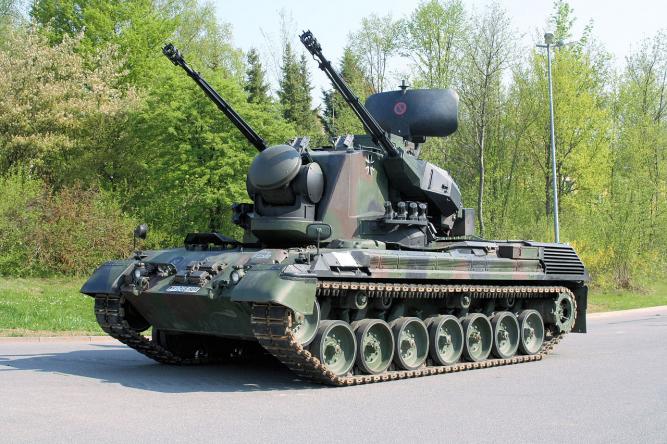 The time is 10.00 a.m.
Date – 24 August, NORTHAG HQ, Düsseldorf, North Rhine-Westphalia.
- God, how boring .... When will the truce begin? - Lieutenant Nielsen, lying on Marder's armor asked, Captain Olsen which passed by.
- Today at 20.00 on Berlin. - answered Olsen.
- Heh, apparently the breakthrough of NATO forces in the hole that our colonel has struck with this rabid guy from the Bundeswehr greatly harmed the Soviets. - said Nilsen.
- Judging by the reports there are panic in the Soviets, NATO's advanced detachments have already approached Berlin. - answered Olsen

At that moment, three Leo-1s quickly moved into the location, accompanied by a pair of Gepard's and Hauptmann Wolff leaned out of the hatch of the forward tank.
- Where is Oberst Dolch? - he shouted to the surprised officers.
Olsen Nilsen looked at each other and shrugged their shoulders in sync.
- Somewhere in the headquarters, or swearing with his wife, or accepts all the world's medal's. - answered Olsen.
- Heck. - swore Wolf, - gentlemen, my intelligence reported that the unit took your guys three years ago, in a few hours, will break out of the Ruhr back into the Soviet zone.
Olsen looked again at Nielsen and he nodded to him in reply.
- Pross with artillery, and Adams with Gepards are here ready. And if you show us the way, then I suggest that we all go and exchange a few warm words with the Soviets. - shouted Olsen to Wolf.
- So what are we waiting for gentlemen. - replied Wolff.

"Alarm! All units to the tanks, building in a column! Departure in half an hour!"
Olsen's menacing cry was heard in the camp in few seconds.

The time is 14.00 p.m.
Date – 24 August, Small town in RUHR warzone.
Nielsen studied with astonishment the abandoned command M113 standing on the road.
- Strange, he is not damaged at all. So a couple of holes. Why did they abandon him? - He asked the driver of his Marder.
- And not even mined,- the driver answered.
- Okay, we'll be defending him. The second platoon is ready? - Nilsen asked the radio and in a second received confirmation.
"Olsen, Wolff, have you finished the disguise? We see the helicopters five kilometers away, and they are getting closer," Captain Adams, commander of the Gepard's platoon, reported on the radio.
- Everything's ready,- Nielsen replied instead. - The ambushes are ready, and we're sitting here like baits. A disgusting feeling. - 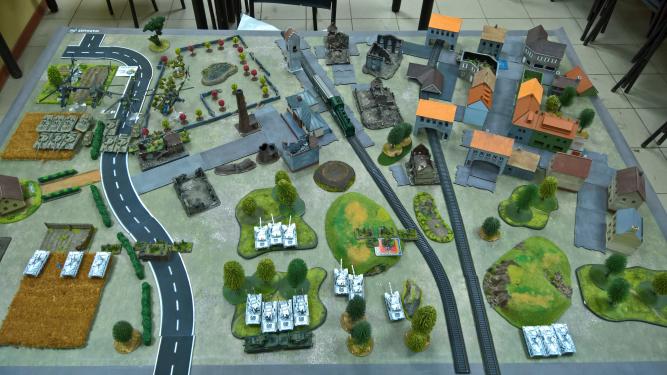 The Soviet units were approaching in dense groups. Nielsen knew that they had little time and they also knew it. 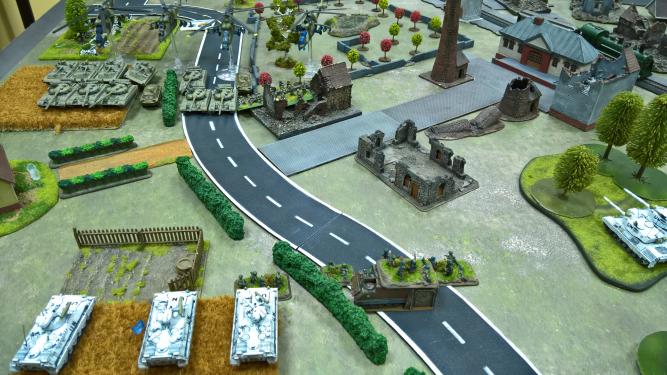 For the breakthrough, they had one attempt, and apparently they were going to use it completely. 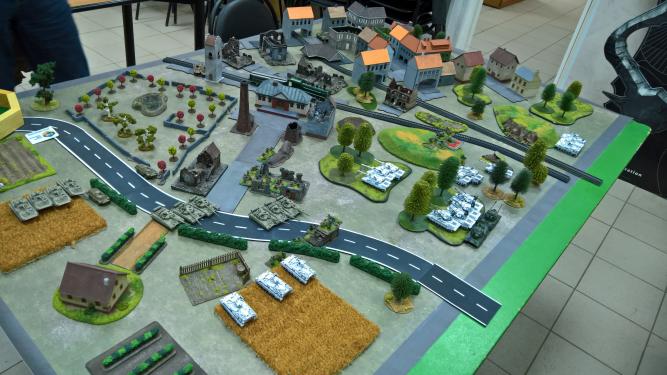 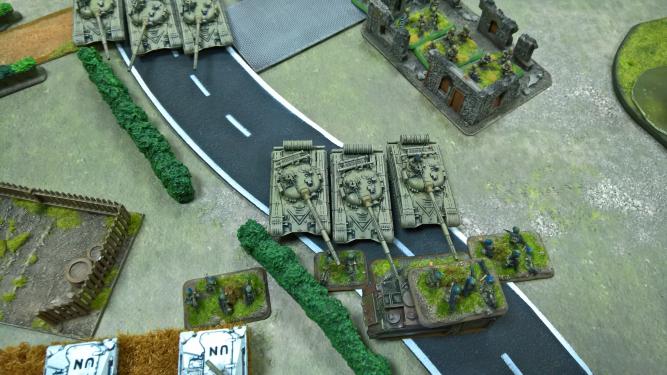 And immediately went into close combat. 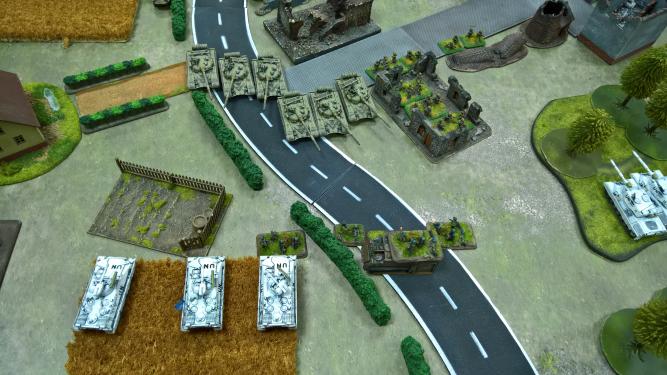 But Lieutenant Olsen and his infantry were ready for this and fired off enemy tanks in a well-organized manner. 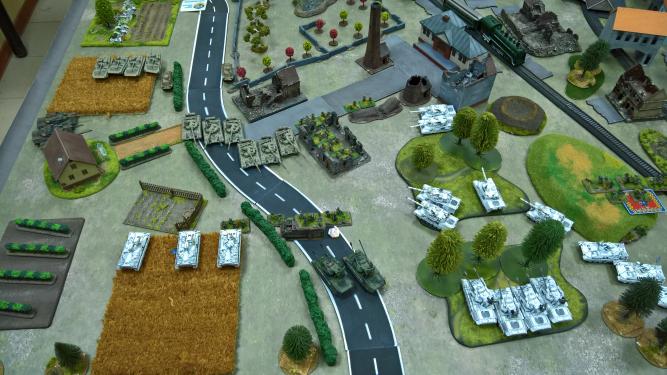 - Let's Go! Let's Go! - he shouted into the walkie-talkie and two detachments of Leo-1 flew off the masksneting and quickly moved forward in the direction of the flank of the T-64. 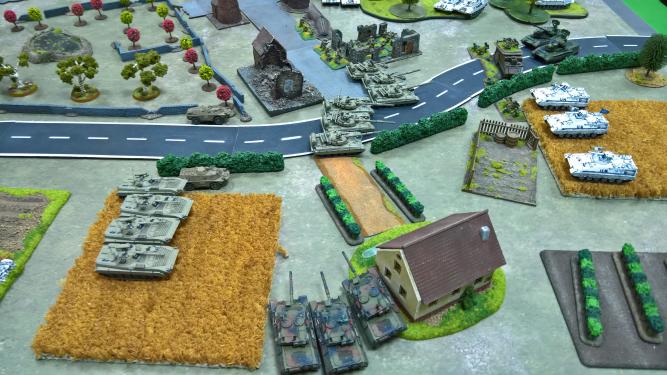 - Die!- Wolf shouted joyfully and his tanks began shooting at the unprotected sides of Soviet tanks. 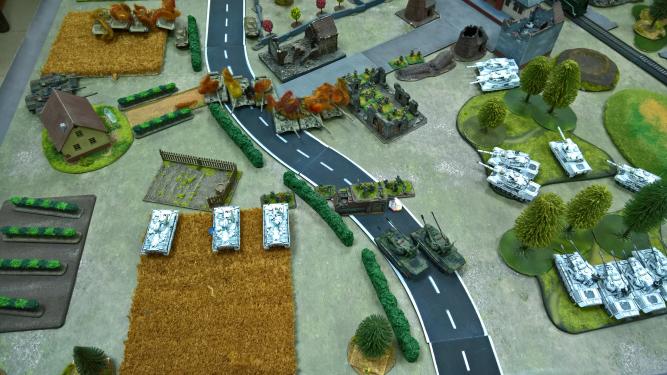 And the two detachments of Soviet tanks flamed with fiery bonfires! 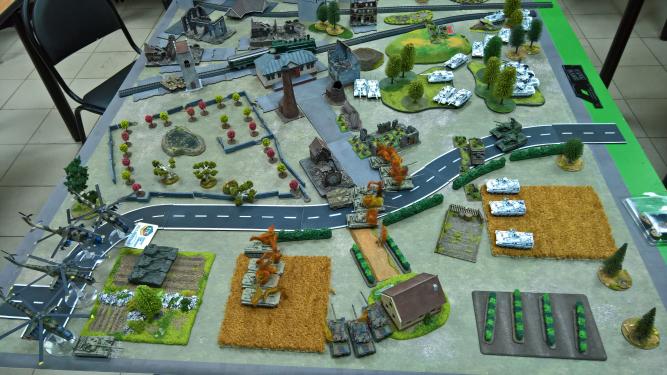 In response, Mi-24 broke through the barrage and fired rockets and they hot Wolf's platoon. "Throw the damaged machines. Your lives are more expensive." Wolf shouted into the radio and left his burning tank with the crew. 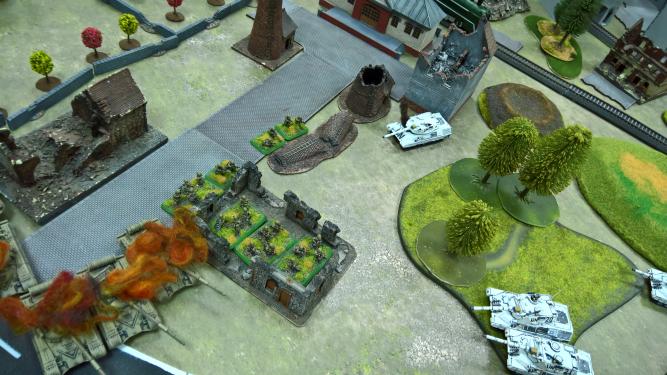 On the other flank, Soviet infantrymen successfully fired upon Olsen's tanks and those following his orders also immediately left the battle. 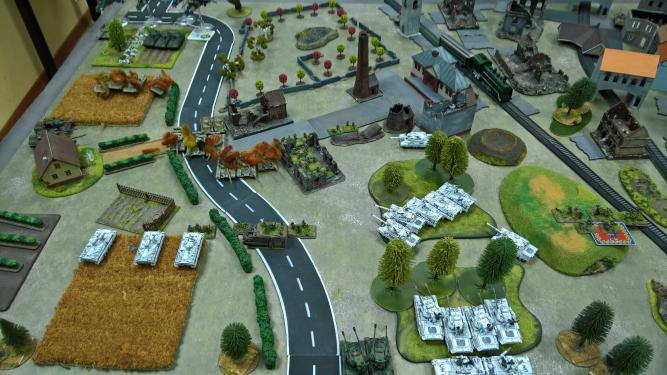 To help Nielsen, the second platoon of Leo-1 advanced and Gepard's moved forward and began to press the Mi-24 to the ground. 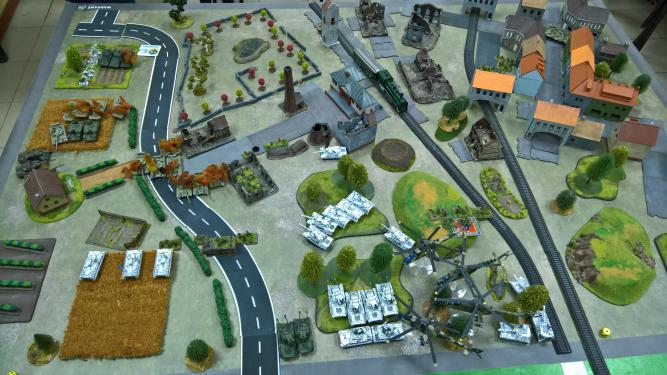 In response, Mi-24 sharply jerked forward to destroy detachment of Gepard's by one raid, but new AA tanks opened fire from them in the forest. 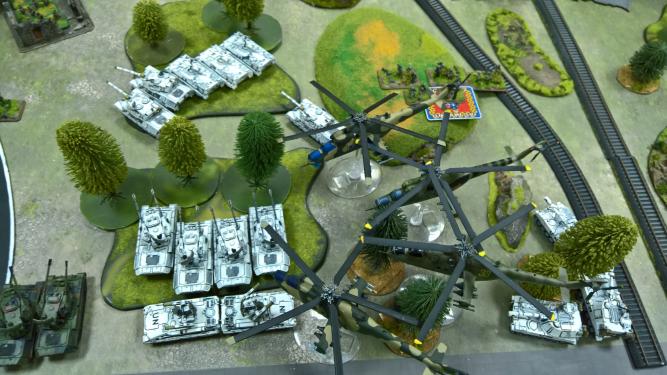 Long streams of fire scattered the sky and the fate of helicopters was decided not in their favor. 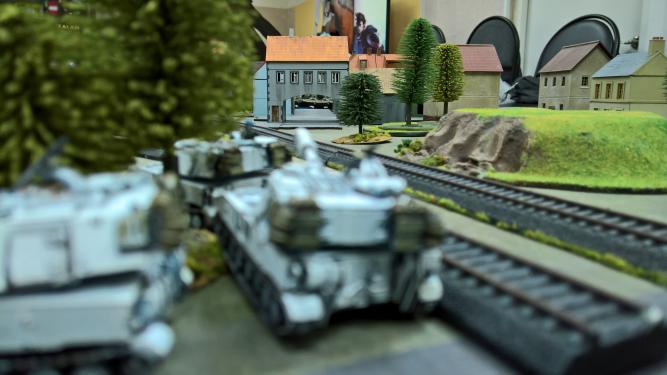 "Artillery. We see BMP. We open fire." reported captain Prost and his M109 began shelling the infantry and armored vehicles that had settled in the town. 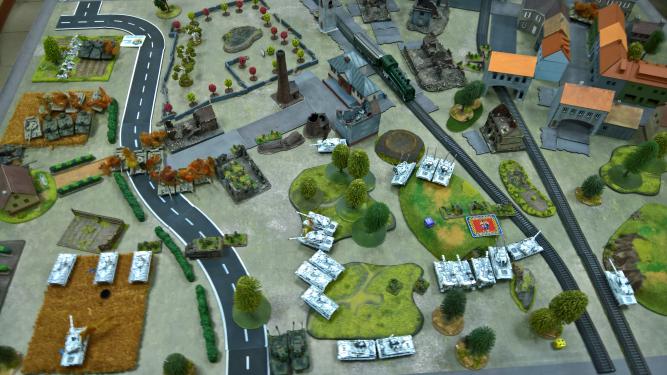 In response, the Soviets threw all their strength forward. Shilki with the support of the last tank went on the attack, as well as the infantry on the right flank. Another pair of White Elephant tanks received hits and their crews quickly left the burning tanks. 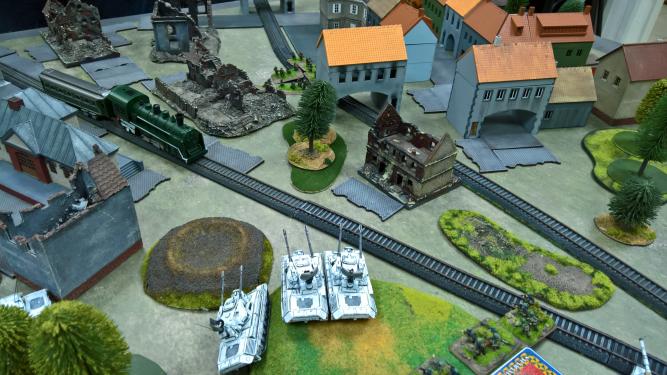 Realizing that there were no air targets, Captain Adams moved his Gepard's forward towards the attacking Soviet infantry. 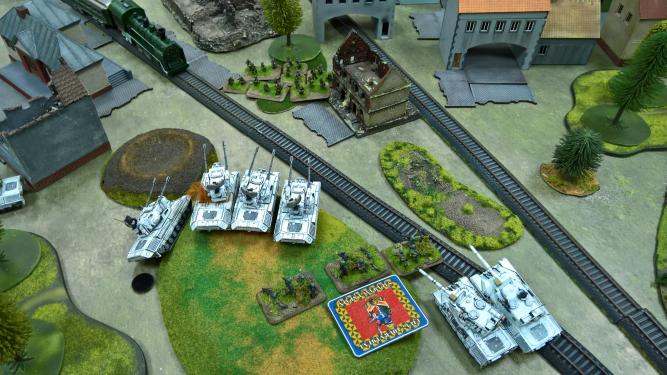 Grenades from the RPG flew into the forehead and one of the Gepard's flared up. 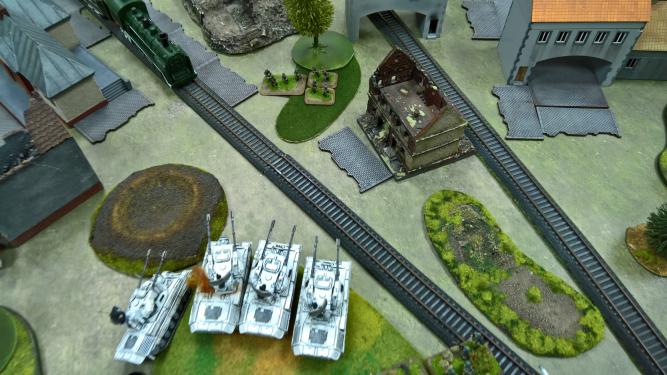 "Farewell" Adams grinned maliciously and the cannons of his tanks began to turn the Soviet infantry into bloody scraps. 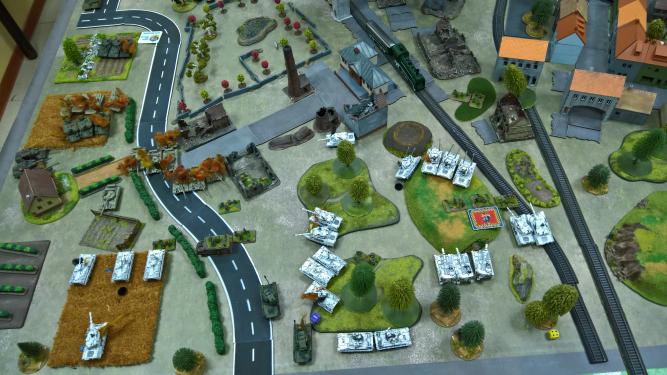 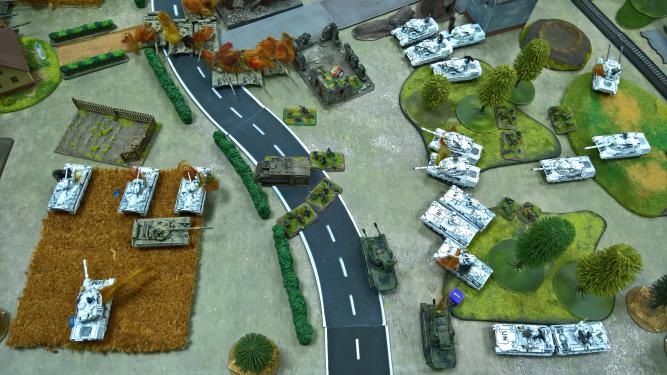 And at that moment the last Soviet tank went on the attack. 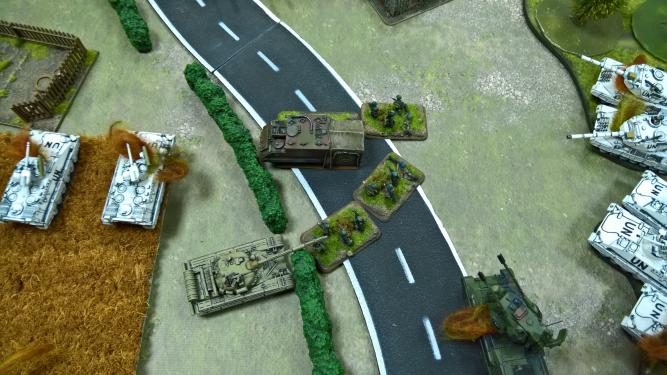 His commanding officer leaned out the hatch pouring Nielsen infantry with machine gun. 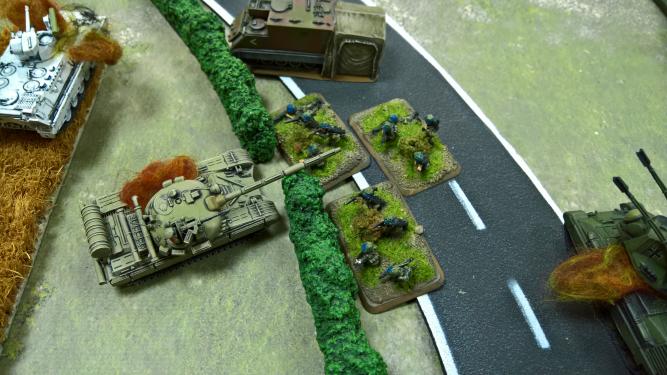 But in response, Nielsen carefully aimed at the junction of the turret and the hull and pressed the trigger of his Panzerfaust44.

Nilsen and a couple of soldiers approached the Soviet officer lying on the bushes.
- How do you think he's alive?- asked one of the soldiers.
- We'll find out now. -Nielsen answered. - When his tank exploded, he flew out of the hatch like a rocket and flew 20 meters. He was lucky to fall on the bushes. -
At this point, the Soviet officer groaned and began to move.
- Well! It seems alive. It would be necessary to explain to the Colonel why we do all this all this and lost so many tanks. Medic! Come quickly! -

The time is 20.10 p.m.
Date – 24 August, NORTHAG HQ, Düsseldorf, North Rhine-Westphalia.
Colonel Dolch walked with his discontented expression past his ranked officers.
- You know, gentlemen, changing the dozen of different tanks and APC to the one Soviet captain seems to me not the most successful deal?- he asked other oficier's
In response to his officers stoically silent glancing at the jeep standing nearby. Near the jeep was Colonel Dolc and looked impatiently at her husband scolding them.
- Dear, - she cried, - the truce has already started like ten minutes and the NORTHAG commander is waiting for us in the restaurant. Will you punish them some other time? -
- Live the lucky ones, - Dolce said, and went to his wife. - do not forget to give this Comunist for an exchange of prisoners. -
- Tomorrow we fucked. said Nielsen grimly.
- Tomorrow will be tomorrow,- Olsen told him. - And today they went to celebrate. And let's hope that the war ends today ....

On this I end the story of the White Elephant War! but I will definitely continue next time!