We did not originally plan to file a report but since we have no WP forces playing I will try and construct the battle report even though we took no pictures. The battlefield was made up of rolling hills and small sections of woods miles away from any of the villages. The enemy took the field and placed his artillery hidden behind some woods on one end and his Helos behind some woods on the other flank of the battlefield. In the center were his Mech infantry and Gepards with his Luchs moving onto the southern flank. Our forces spearheaded forward in the center and north and took as much of the terrain that was possible to deny terrain to the enemy mech forces. Our infantry held an objective in the south while out tanks maneuvered into the center of the battlefield. Our Jaguar 2s positioned in the north to deny two avenues of approach to the enemy.

Turn One was a little slow as each side maneuvered a little to get better positions and avoid being pounded by each others missiles. My Marders pushed south to try and flank the enemy and make a run toward his hiding helos in hopes of getting some shots at them. Of course, the Luftwaffe failed to show up, and would not arrive until turn Eight.

Turns Two though Seven are a blur as we spent much time discussing tactics and capabilities against WP tanks and hoards as we were taking pot shots at each other. I lost a couple tanks but the remainder were highly motivated and stayed on the battle field. It was in turn Four that my Marders made it behind the enemy and got some shots at his helicopters, killing two of them. That was a first for me killing helos with non-ADA assets.

Turn Seven resulted in my forces pushing forward and attacking his mech forces on the objectives and finally killing enough of them to take one of the objectives.

Turn Eight and it was over with a tough fought battle on both sides. Southern West German forces pulled out the win. 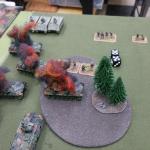 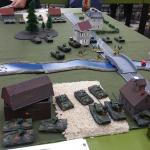