In an effort to keep the pressure on the defenders of the Hanover sector, Command had ordered Major Sealanov to push on through the night and secure the bridges over the next river. The first days of this campaign had taught the Soviets what dug in British troops could do and Major Sealanov didn’t want to give them the chance to re-establish a defensive line in this area. Intel reported no viable enemy formations this side of the river. Intel that would prove to be terribly optimistic.

The map afforded the Soviets two options, a road which wound through a small village and into the woods linning the river or a large gentle, open area with a railroad embankment on the right. Like any good tanker, Sealanov chose the open field over moving through an un-scouted built up area at night. He raised himself in the turret of his T-72 staring into the darkness, trying to see any sign of movement. He dropped hand to his throat mike and ordered his boys forward at full speed. His BMP recon force had allowed his tanks to cover much of the open area toward his initial objective, the rail road station, with no indication of any enemy. Once past the train station and through the woodline, he would be at the river and hopefully secure the bridges into Hanover’s suburbs by dawn. His radio net crackled with the news that he had been joined by a lost company of 5 additional T-72’s on their way to the same bridges.

Major Jones and his Welsh watched the dark hulks moving at breakneck speed through the rolling fields. They were coming straight into his positions in the tree line. They seemed oblivious to the danger his men posed. Were they really that arrogant? He repeated his orders to the platoon commanders — no firing until he gave the command. Let them get really deep into the trap. It mustn’t be sprung too soon. The shells from the Soviet 122mm guns landing near him were nothing but a nuisance. He could wait.

Turn 2 When the World Seemed to Explode

Major Sealanov’s first indication of trouble came from his recon; reporting extensive mine fields to the front of the advance. Nothing he couldn’t deal with though; “Mine Clearers to the front— NOW!”. Soon came the more worrying news. The tanks on his far left were reporting the likelihood of enemy infantry in village. Before he could issue any orders the young fool of a Leytenant had ordered his tanks to fire on the largest of the buildings in the village, some kind of inn. Several rounds went into the building but to no discernible effect. They had however managed to light up their positions if there were indeed any enemy in there.

Major Jones chose this moment to spring his ambush. The Spartans had been tracking their quarry with a lethal professionalism. Four Milans fired, four T-72’s destroyed in an instant right in the center of the Soviet line, including what appeared from the mass of antennae to be a command vehicle. The night seemed suddenly as bright as day. One tank jerked to a halt and the guardsmen saw the turret hatch explode open with an awful yellow white burst of flame. Now it was the turn of the Milan platoon which occupied both floors of the inn. Four more Milans streaked toward the suddenly swerving tanks finding and killing two more victims. Major Jones couldn’t believe his luck. Finally the Milans of the two infantry platoons added their four missiles to the mix and two more tanks exploded and the crews of two more pushed through their hatches and jumped into the darkness. Even the Charlie G’s joined the action, bagging three of the BMP’s. Chaos reigned.

Turn 3 An Attempt to Retrieve the Situation

Despite the hell all around him and his inability to raise his likely dead commander, they young leytenant of the BMP company ordered his men to dismount and assault the tree line. That had to be the source of the missile fire. The remaining tanks each independently, it seemed, were firing indiscriminately into the train station. The ammunition cooking off in the tanks was deafening. Command was near impossible. He was counting on his men’s training.

Major Jones knew they would come, he was certain of it. And here they came, running directly at his men. A storm of automatic weapons fire killed many of them and caused the lucky few to drop to the ground wishing they could dig a hole in which to hide. Was it wrong to be so proud of the men he commanded?
The assault halted, Jones now saw in the dancing flames of the burning t-72’s, the Scimitars moving up in support of his positions. They opened fire on the few remaining BMP’s and four more erupted in explosions. The remainder were dispatched by the Charlie G’s of the two platoons and the combined MIlans wrought havoc on the remaining tanks, killing them all.

With no remaining commander to rally them, the Soviets ran from the field. It had been short, sharp and vicious. Major Jones’ men immediately began to scour the field to their front for wounded they could help.
This game was the shortest I have yet played. Dice rolling affects any game but the Welsh dice were incredible. It seemed over before it even began.

A great game though and my Soviet compatriot is swearing bloody revenge. 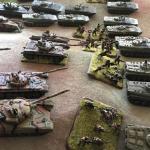 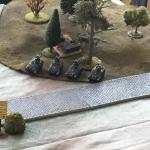 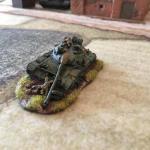 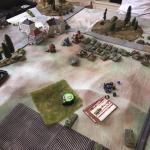 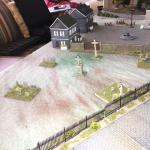 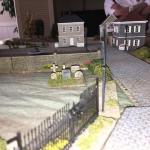 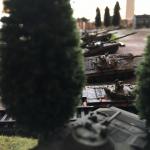 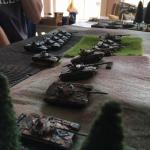 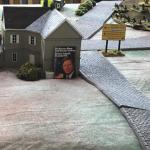 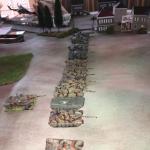