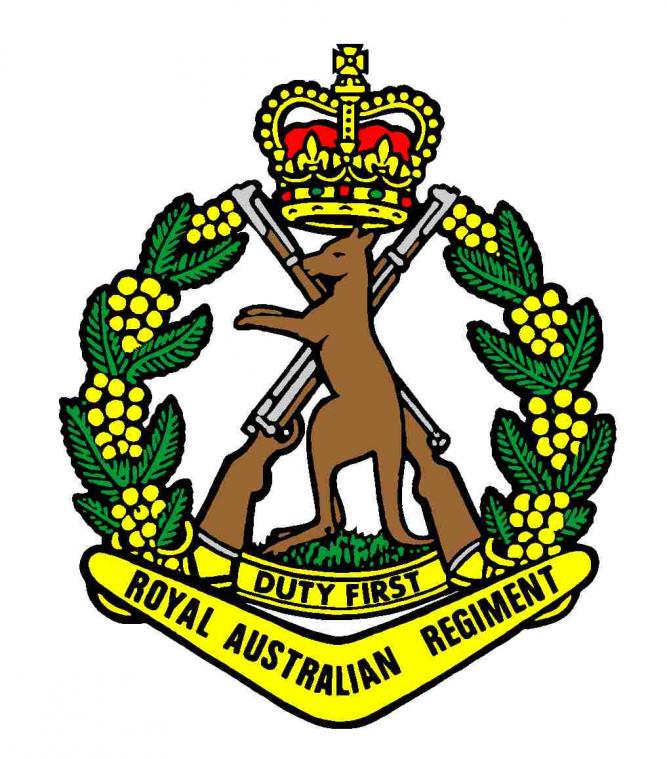 The Insignia of the Royal Australian Regiment

This is the first of two battles fought against my long-suffering opponent; Hoffel Roffel VII. Whilst this battle was actually played after the one that follows, it makes the most sense in the narrative to have this one come first. It will make more sense later on.

The ANZACs in these battles are represented by the 'British II Corps' pdf, written by myself shortly before the conclusion of Firestorm: Red Thunder, and approved for official Firestorm use by Battlefront.
The pdf is available here: British II Corps

The Diggers take the field

Captain Clyde Slater and his 'mob' found themselves sent to reinforce the beleaguered British I Corps in Hanover. The drive through Saxony has been unpleasant; most of the men hadn't seen this amount of destruction and death. Their fathers most likely did upon their Tour of Duty in Vietnam some twenty years before. They had entered then as hopeful liberators, but the pressure from home had left their impact tarnished. This time round the Government and the 'do-gooders' back home had kept quiet. Even the propaganda coming out of the Eastern Bloc wasn't working this time round. They were here for a reason. 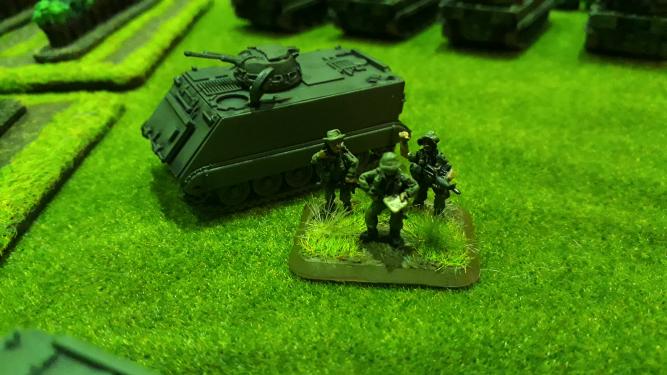 Captain Slater checks his maps before the 5th Battalion deploy

Eventually, the small convoy of M113 APCs slowed to a halt as they pulled up alongside a warehouse just off a busy main road. There were vineyards across the way, but the area had been abandoned long before.

"Ey! Mozza's got us lost. We're in France, boys!" One of the platoon sergeants called out from his coupla, the few soldiers sitting outside their tracks laughing at the joke.

"Keep yer yap shut, Carlisle. We're where we're supposed to be. Second platoon, pull in behind that warehouse and stretch your legs." Slater replied, waving his hands at the trailing tracks to pull in beside the train tracks that followed the road back north. "We've to wait here for the armour to show up. An' then we'll get more info on where we're going." He climbed down from the track, the MG gunner giving the old T-50 turret a spin. "Still not got that .50 workin' Bill?" He shouted up, the top of the turret opening and a scruffy solider leaning over the side.

"Thing's as old as Ayers!" The man called down, shaking his head. "Needs to go in f'r a service."

'Relics' Slater thought to himself as his men dismounted. He ordered the Milan section to take position in the upper floor of the warehouse, while platoon one would take the lower floor. Platoon two would sit their tracks and equipment behind the hedgerows, just in case any 'birds' decided to have a nosey at their position. 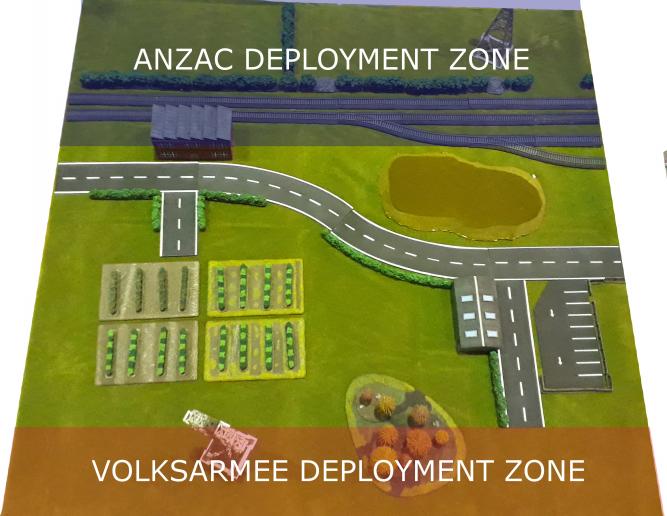 The deployment, with the warehouse to the west of the battlefield

The men got themselves settled in for a long wait, Sergeant Carlisle walking up with two bottles of wine in his hands.

"Eh, Cap'n, check it out; 'Hock'. Funny name f'r woine, roight?" He chuckled, passing them over. Slater took them and set them down on a nearby table.

"Funny name, yeah. Still not yours Carlisle. We're 'ere to win 'earts and minds, not rob 'em blind." He scolded the man as a commotion upstairs interrupted them. One of the Milan loaders; corporal Wester, appeared at the top of the stairs.

"Captain! Tanks 'eading up the road t'wards us! They ain't ours." He gestured frantically towards the road east, that slinked behind a hill and a storage shed. But the rumbling of engines was hard to miss. Some of the men sprang into action, others lazily got into position as Slater hurried up the stairs for a better position.
In the distance, but closing on them was a small formation of Russian tanks, covered by squat, sturdy-looking AA tracks. Slater raised his binoculars, squinting through the dusty window.

"They aren't Russian, son. They're German... least, not the right sort of German." He smirked, nodding to them to set up. "Doesn't seem like they've seen us yet. Keep an eye on 'em, and wait for my signal." He instructed, descending down to organise.

"Roight you lot, they're headin' this way. We're gonna give 'em something to think about, yeah?" Slater announced, the men giving a rousing cheer in response, hastily quitened as the rumble drew closer. "I 'ave a plan... mount up." He instructed, jogging outside to order platoon two. 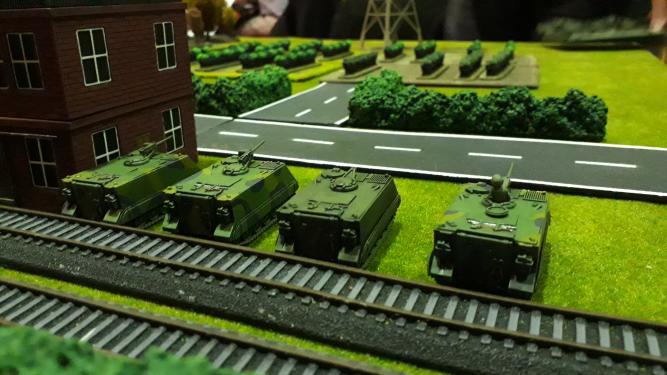 Platoon One's tracks in the shade of the warehouse, out of sight, out of mind

The tanks roared into sight, the turrets of the supporting 'Shilka' anti-aircraft tracks scanning the skies for threats as they advanced down towards the ANZAC position. Slate watched them every inch of the way, using the hedgerows as cover, but keeping an eye on both of his own platoons, ready to give the command. 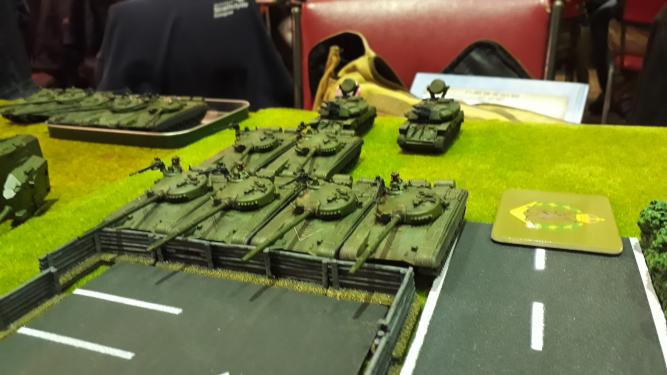 The German Panzers enter the field, followed by their covering Shilka Flak-Zug

The trap is sprung

Slater waited a moment longer, just readying, ensuring everything was in place before the show started.

"Platoon One, advance to the vineyard, give them something to consider!" He barked down the radio, the APCs on the other side of the hedgerows roaring into life and starting off towards the vineyards. It seems despite never being in a real combat situation, his boys knew what they were doing as the tracks slipped between the rows of grapes effortlessly. He held off ordering the Milans to open up. The tanks were still a little concealed by the hills and buildings across the way. But with PlatoonOne acting as a distraction, he could get into position to order Platoon Two.

The German Panzers seemed to take notice of the sudden movement across the fields. The Shilkas and lead tank peeling off from the main group to investigate, while the main body of the force continued towards the main road. The lead would start flying soon. 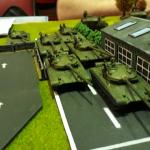 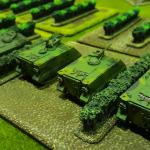 The Shilkas ground their way into the woods, their guns lowering, before a sound like a ripsaw echoed across the valley. The flurry of 23mm rounds raking across the APCs in the vineyard, but the thick armour plate across the front kept them from harm.
The T-72s advancing on the warehouse finally reached the junction of the road, giving the Milans their chance.

"Milan troop! Give that bugger in front somethin' to think about!" Slater yelled down the comm, four streaking missiles the answer as they spiralled their way towards the German armour. A pair went wide, but two found their mark on the tanks who had wheeled round the side of the storage shed, the first blowing his turret, the second grinding to a halt with flames and sparks erupting from the engine deck.
"Good shooting! Keep it up!" Slater encouraged as he saw his men dismount in the fields, holding their position, and the attentions of the Shilkas. "Almost done? Shame..." 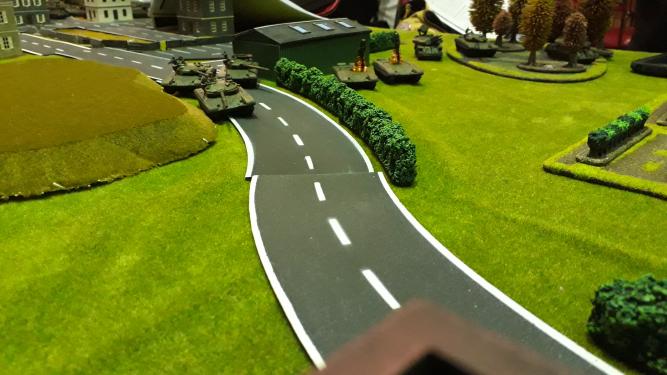 The Milans open up from their position in the warehouse, making two T-72Ms regret their decision to get out of bed this morning

No sooner had the thoughts entered his head, when his radio crackled into life. Sergeant Carlisle hailed him as bullets and shells pierced the transmission.

"Cap'n! There's more of 'em! Came outta nowhere... we're up the swanny here... need some help... if you don' moind!" The sergeant didn't sound panicked, more surprised, before his transmission was cut off by a loud explosion. Slater glanced over, the lead tank and the newly arrived ones were peppering their position with everything that they had.
The T-72Ms on the road seemed to sort themselves out as they turned turrets towards the source of the missiles, almost collapsing the roof.

"Cap! Morrison's taken a bad hit, an' 'is gun is wrecked." The report from the Milan Troop was worrying, but missiles were soon flying again, this time towards the Shilkas, who seemed to pause to reload their guns. One missile stuck perfectly into the side of the unfortunate soul outside the forest, while the second clipped the tracks off the lead one, narrowly missing the Command Tank.

"That makes up for it. Good on ya!" Slater nodded approvingly before setting his sights on the tanks over the hill. "Up! Up! Come on, get up! We're getting them!" He ordered, pulling men up and pushing them through the hedge. The short sharp movement of them seemed to catch many of them off-guard, unable to bring their weapons to bear properly, they would have to weather the storm of fire before the day was done. 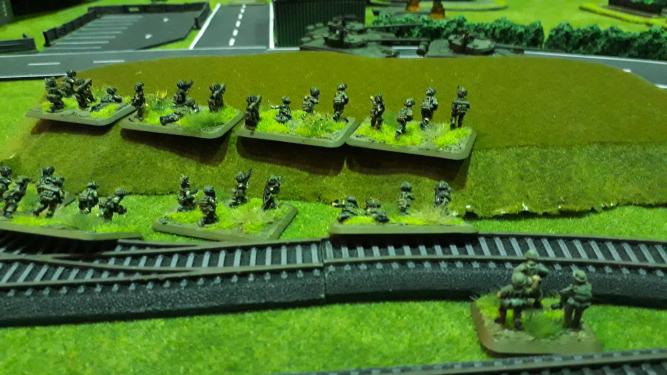 The infantry hop the hedge and engage the tanks, but miss their shots!

Not quite the Divisional Cavalry

"Jeez!" Slater exclaimed, throwing himself to the grass as the tanks turned turrets towards the advancing Aussies. Their machine-guns raking the hill, kicking up plumes of dirt as his men threw themselves to the ground, somehow emerging unscathed from the withering fire. He could just about make out Platoon One nestled in the vineyard, the sparking tracer rounds from the German Panzers tearing the vines apart, but it seemed that the Shilka track had his fill of the battle and engaged reverse gear, slipping away, out of sight and out of the battle.

At that moment, the sound of engines echoed against the warehouse, Slater rolling his eyes as he expected to see yet more Panzers streaming into sight. Instead, his heart leapt as three Leopards pulled up behind the hedgerows behind them. They looked so sleek compared to the old 'Koalas' his father had manned back in 'Nam, but no doubt they were just as deadly.
That thought was confirmed as gun barrels veered into position, the tanks rocking slightly as rounds loosed across the fields, one of the T-72Ms catching one square and igniting as missiles followed suit from the warehouse, another brewing up in the process.

"Okay! Go!" Slater commanded of his platoon, the men rising to their feet, ready to charge, were it not for the Carl Gustav gunners putting highly effective rounds through the thin bazooka skirts of the Panzers below them. "Well bugger then..." 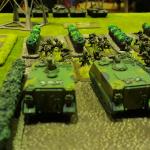 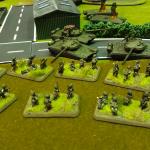 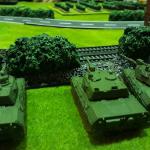 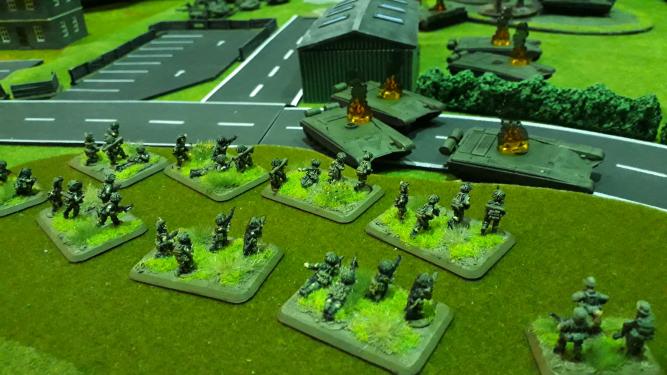 Sometimes your shooting is too effective...

The Aussies give chase

The few remaining Panzers began to slip from the field. The men around Captain Slater cheering as they celebrate their first encounter, and first win.

"That was jus' the tip of the spear... we need to go foind the shaft." Slater informed them, getting them back into their transports. "Moight foind somethin' worth gettin' rid of." He added as the Company took to the road, the Armour following on.

[As mentioned, this is the first of two battles in a narrative. The next one will see Captain Slater find a larger force and have to deal with it. I hope you enjoyed reading this one]