Fought At Amsterdam
1533 days 39 minutes ago

I have played more than a couple of games against Comrade Nigel’s Team Yankee Soviet Army which in the past he has used quite defensively. His restructured list was notable for a little more offensive kick with T72 and BMP being more prominent along with strong aviation arm representation

The mission was dust up & Nigel had numerical superiority and deployed his infantry on the near objective and concealed his T72 and BMP units behind hills and woods. 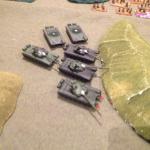 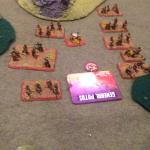 I kept my Scout Units in reserve and deployed my M1IP, Chaparrals and A10 Warthogs. With the Soviets being deployed out of line of sight, I took forward positions with both my M1IP platoons, the plan was to press hard on the infantry in early turns then go hunting the T72 and BMP. 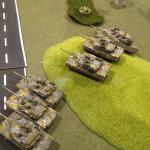 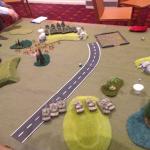 First turn went to the Soviets – the BMP successfully blitzing & cresting the hill into firing position. T72 also rumbled forward to firing positions on top of the hill. Combined fire against the larger of my two M1IP platoons left one tank burning and a second bailed out….

…and then came the artillery which successfully bailed out a second tank in that platoon which promptly failed morale abandoning their tanks as they left the battlefield. 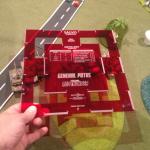 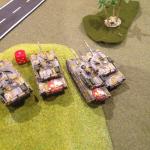 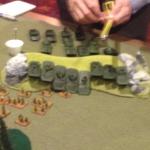 Well, that was a hell of a first turn! The only offensive capability I had left on the table as a platoon of three M1IP. This platoon attempted to get into the side of the T72 cresting the hill with a blitz move – attempted & failed. Tank fire at this unit was largely ineffectual & the only real damage done to this unit was from a A10 Warthogs strafing run. Unfortunately a Warthog was lost to a man pack SAM on the way in. 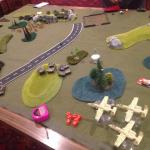 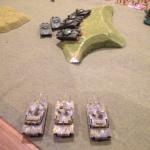 Thankfully the M1IP were now left out of line of sight of most of the BMP and just out of manoeuvre range for the T72 to get into the side for flank shots. Nigel’s T72 rumbled forward and the BMP on the hill successfully blitz moved again to regain firing solutions on my M1IP platoon, bailing out one of my three tank platoon.

The bailed out M1IP then refuses to remount. At least the three strong A10 Warthog flight returns. My M1IP reposition for flank shots on the T72 and the last T72 of the platoon is destroyed by Maverick missile fire for the cost of another A10 Warthog. Although the air has turned up every turn, it is not paying for itself only picking off one or two T72 for the cost of each aircraft.

Turn three sees the arrival of the Soviet Hind gunships which fly screaming on into firing position over the remaining M1IP platoon. Chaparral defensive AA fire takes out two choppers before the Hinds loose a volley of AT6 Spiral missiles destroying a tank. This left a very critical motivation roll for the M1IP platoon which it passed.

The bailed out M1IP refuses to remount (again) and the lone surviving tank repositions to fire on scout BMP. No reserves arrive for the Americans. The two strong flight of A10 Warthogs return to the battlefield and combined fire takes out the BMP scout platoon. 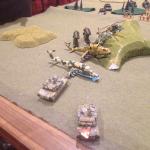 The Soviet Aviation Su25’s arrived from reserve at the start of the Soviet turn, forming up for an attack run on the lone operational M1IP alongside the remaining Hind Gunships. With nothing between the Motor Rifle Company BMP and the objective they streaked across the board at full speed to challenge the objective. 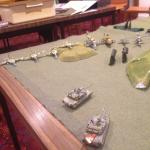 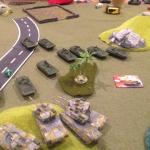 They need not have bothered. Kh-25 missile fire from the Su25s destroyed the remaining American tanks breaking the company and giving a 5-2 victory to the Soviets.

Congratulations to Nigel on the change of list and change of tactics to an Attacking Doctrine. The game was over in less than an hour.