Following the action near Paderborn, what was left of the 61st Guards Sverdlovsk-L'vov Tank Regiment, 10th Guards Tank Division had been sent to the rear areas to rebuild and refit. Podpolkovnik Vorishnov was looking forward to some down time after many days of constant action. But the front lines seemed to follow in his footsteps. Within hours of receiving their new tanks, NATO had launched an audacious attack into the Brandenburg area and the recently reconstituted elements of the 10th Guards were being thrown into action to hold the line. 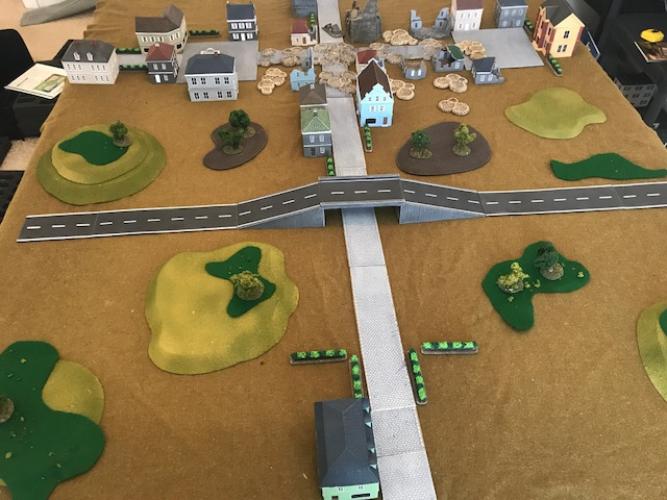 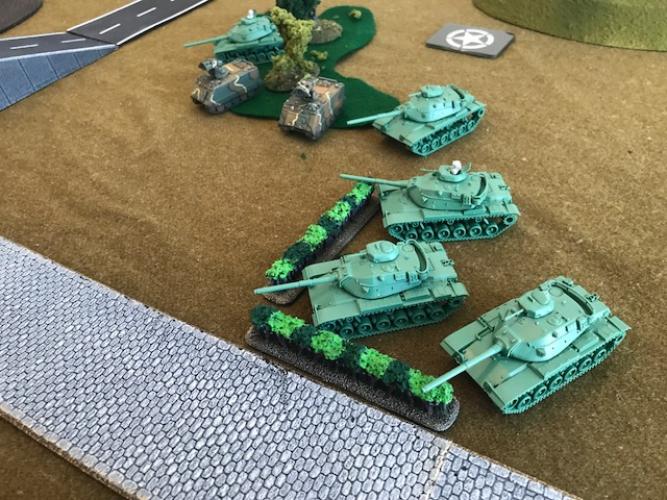 The American's deployed for battle. 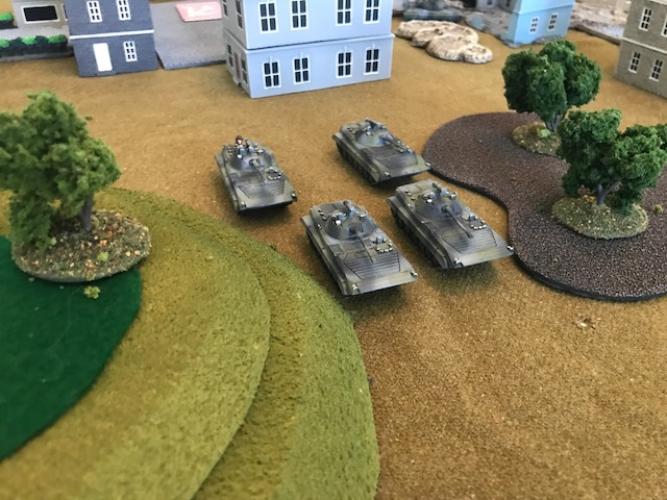 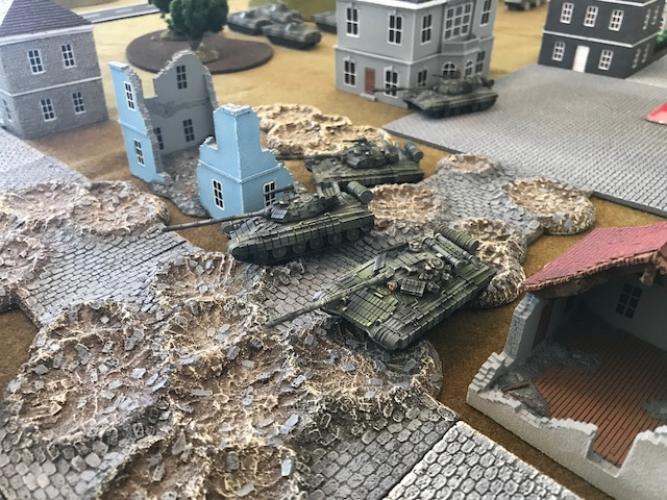 While T-64s cover the approaches.

Vorishnov ordered his forces forward. Both sides were few in number, hoping for reinforcements to increase their odds. Urging his Motor Rifle troops forward in order to claim the hills to the west, Vorishnov and his tankers pushed south-west to keep pressure up along the front. 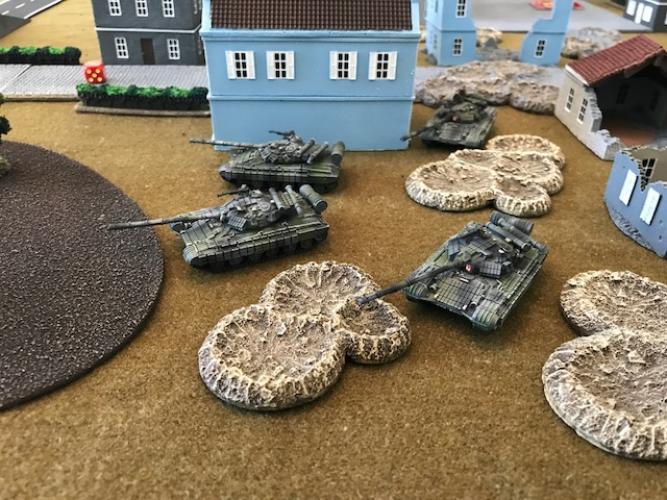 The American commander, understanding the same, he pushed his tanks forward to stop the BMP rush and cover the Western approaches, while his ITVs covered the south. 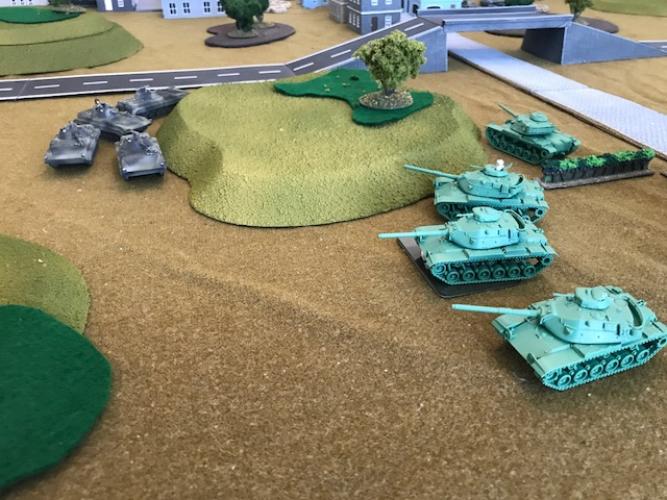 With both sides jockeying for position, it was Vorishnov and his tankers who were the first to fire. Spotting the American tanks moving across the road toward his motor rifle troops, he took them under fire in an effort to get their attention away from his BMPs. Knowing that the BMPs wouldn't survive engaging American tanks, the motor rifle company commander ordered his troops to dismount and head for the cover of nearby woods, while the BMPs would displace and head to cover the southern front. 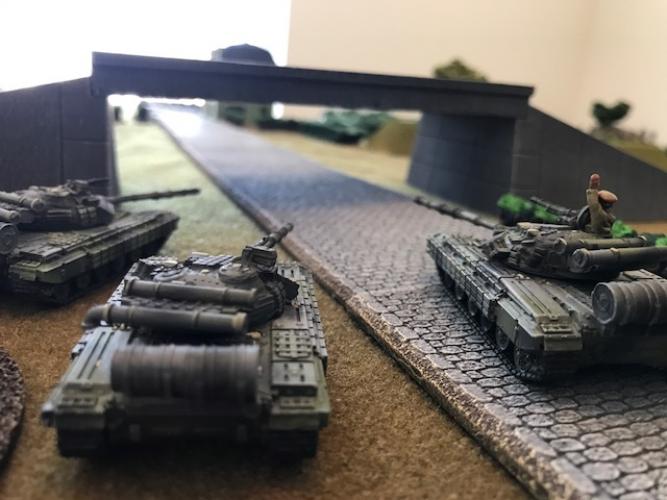 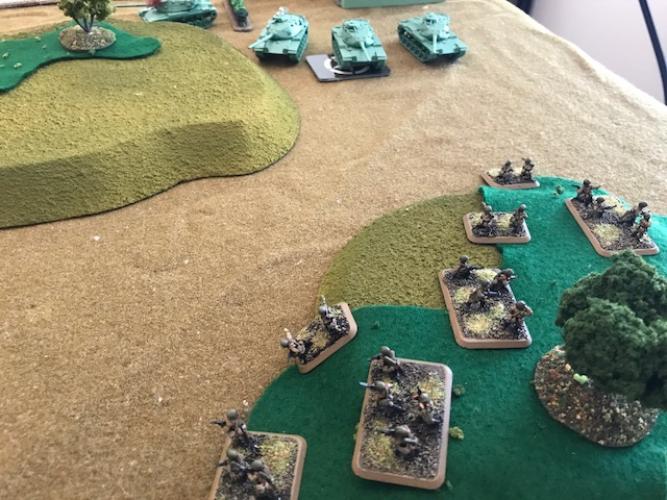 The American commander, despite having lost an M60 to Soviet fire, moved his tanks forward to spray the dismounted Soviet infantry with MG fire. Shooting up the tree line, several RPG troopers went down under the hail of fire, the rest ducking down as close to the ground as they could. 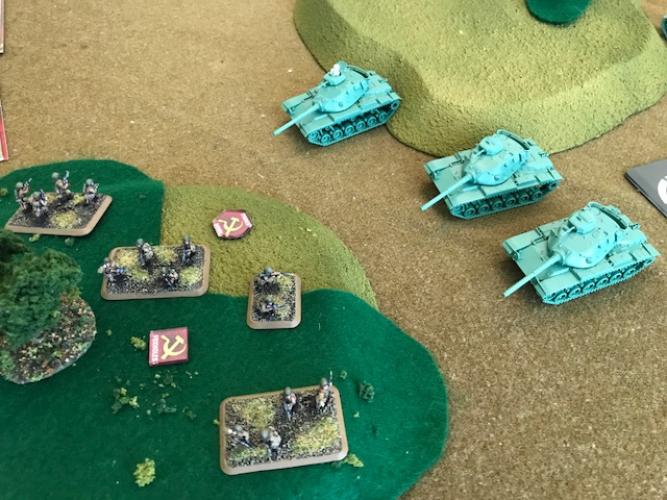 With no reinforcements arriving, Vorishnov had to keep the Americans on the back foot until they did. With his BMPs maneuvering to cover his flank, Vorishnov and his tankers continued to press forward, putting fire on the hidden American ITVs, claiming one with a lucky shot.

It was the Americans who were the first to receive reinforcements, with a flight of attack helicopters arriving in the East. Taking hidden positions among the buildings of the town, the readied themselves to pop up and fire. The American tankers continued to fire on the motor rifle troops, hoping to keep them pinned and cause casualties. They surviving ITV managed to claim of Soviet tank, avenging its comrade. 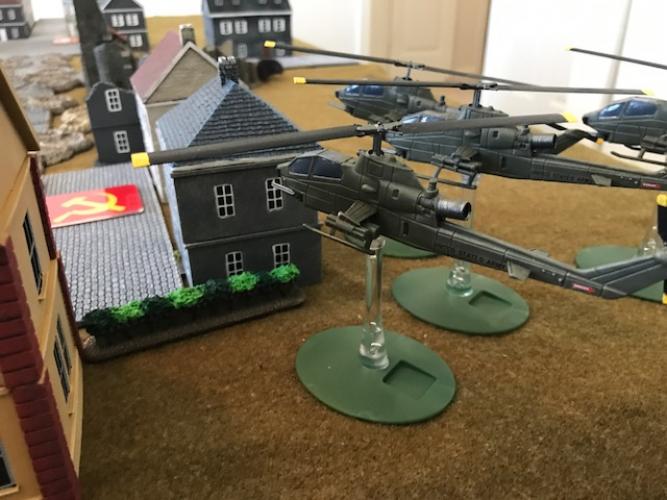 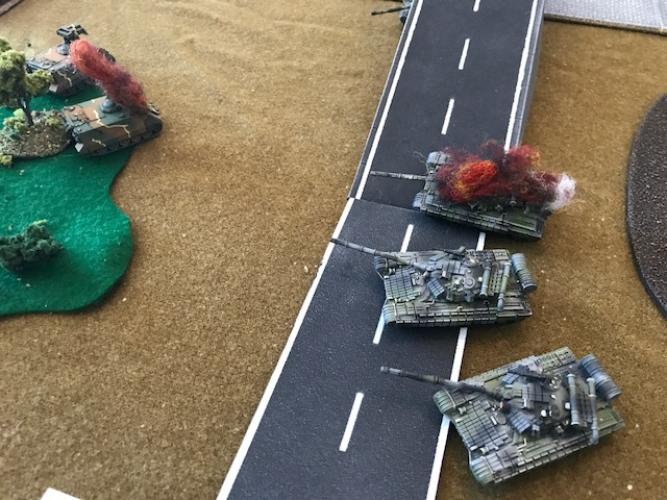 Vengeance thy name is TOW missile!

For Vorishnov, the arrival of American attack helicopters was disheartening, but his spirits were buoyed with the arrival of a unit of T-64s, almost in perfect position to threaten the American tanks shooting his motor rifle troops. Firing from the march, the T-64s got one M60 and bailed another. Vorishnov himself engaged the lone ITV that wass harassing his forces, hoping to eliminate it as a threat. 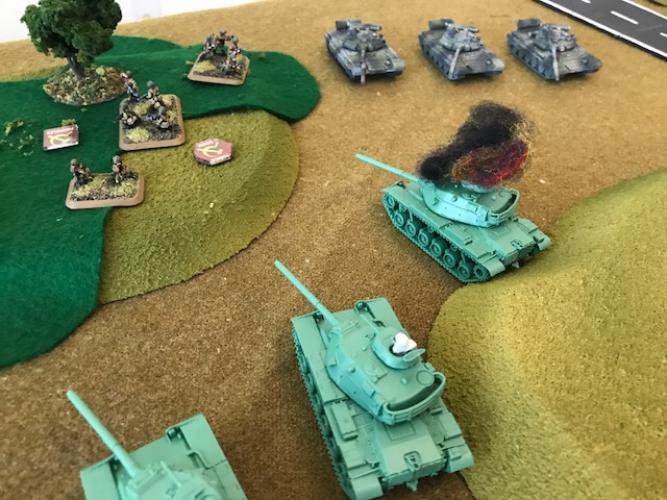 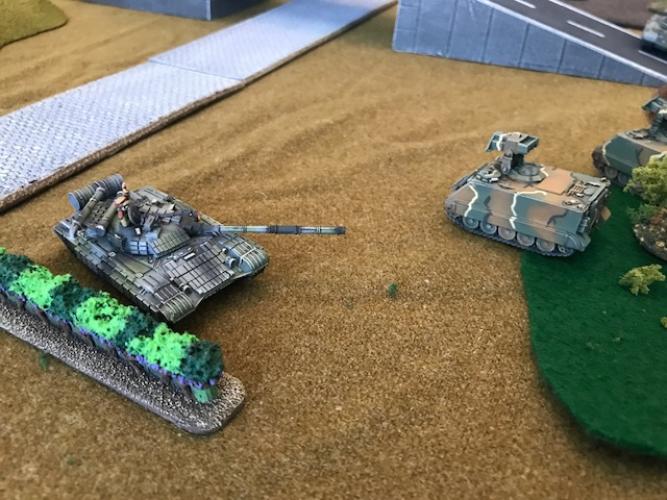 Vorishnov closes on the ITV.

But luck was not only with the Soviets this day, with American armored reinforcements arriving in a perfect position to shoot a pair of T-64s at point blank range in the rear. The American Cobras, out of range to hit the newly arrived tanks to the north west, instead chose to pull some SEAD and his Vorishnov's SA-8s. While losing two Cobras in the process, they managed to kill on SA-8 and force the other's crew to run for the rear. In the north, the American platoon leader chose to disengage and fire from a distance, hitting several Soviet tanks but causing no casualties. 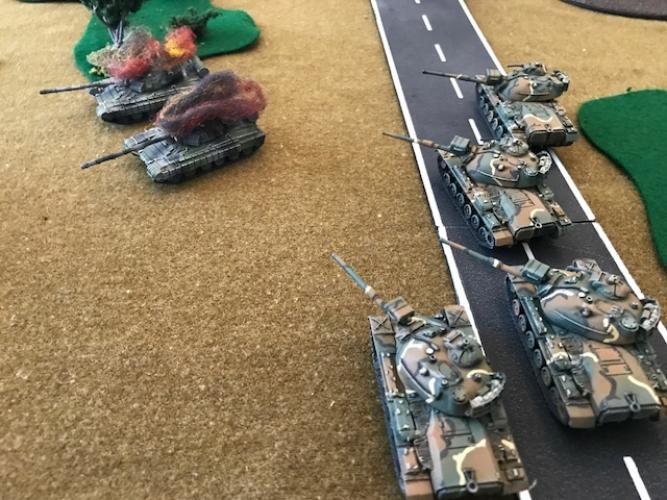 American tankers, on time on target! 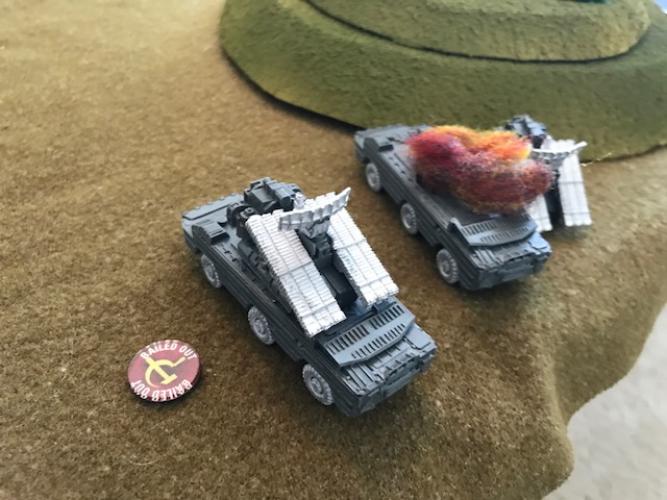 While both sides were getting good hits in, neither side could fully gain the upper hand in the fight. More Soviet reinforcements arrived in the form of a pair of Hind helicopters, rushing forward to the battle area, ready to fire on enemy tanks or drop of assault troops as needed. The BMPs, finally in position in the south, tried to engage the American attack helicopters without success, mainly hitting the buildings the Cobras were using for cover. In the north, the T-64s closed on the objective, killing another M60. Despite this, the platoon leader remained, ready to fight it out to the death. 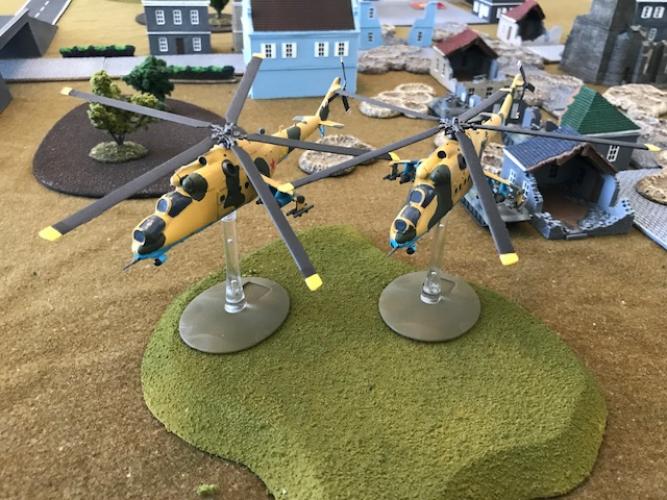 Hinds zooming in low and fast. 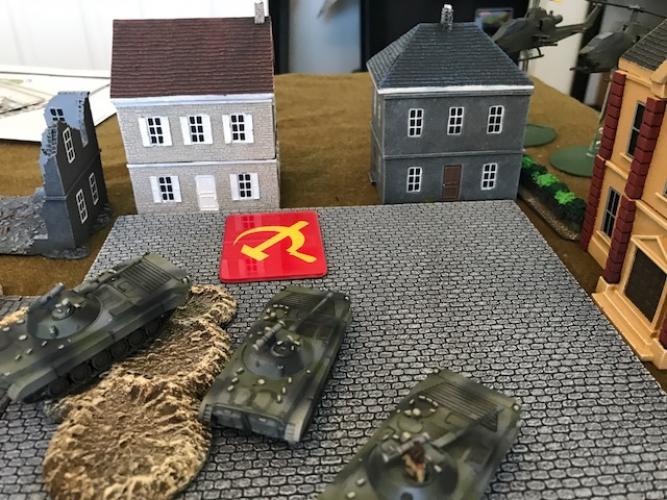 BMPs spray the buildings, swearing that there are American helicopters behind them. 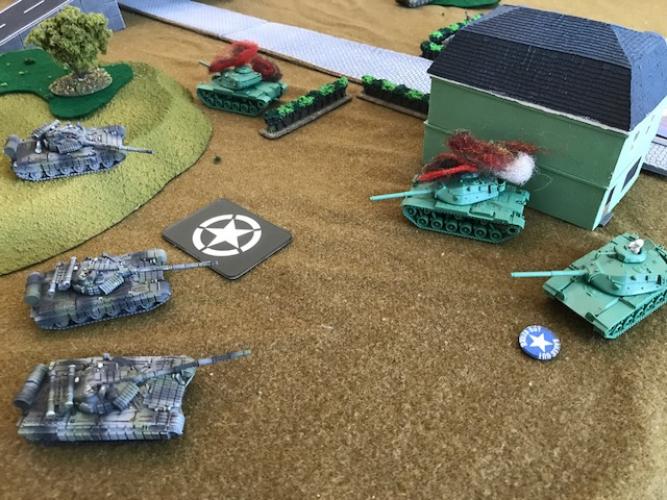 The fight in the north west continues.

Sensing that the northern battle is reaching a culminating point, the American commander threw everything he could there. Ordering his platoon leader to contest the objective, while his recently arrived Mech platoon rushed to reinforce him and the other tank platoon fired on the Soviets from long range, he could it would be enough to buy him the time he needed. With a torrent of 105mm shells, one T-64 was killed and the other two bailed out. Despite this heavy fire, the Soviet commander knew this was his battle to win, and remained as motivated as his American counterparts. 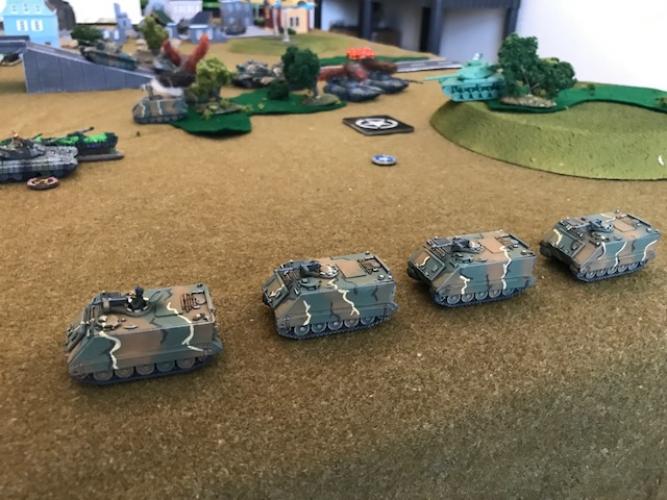 Mech platoon rushes to the front, hoping it's also rushing to the rescue! 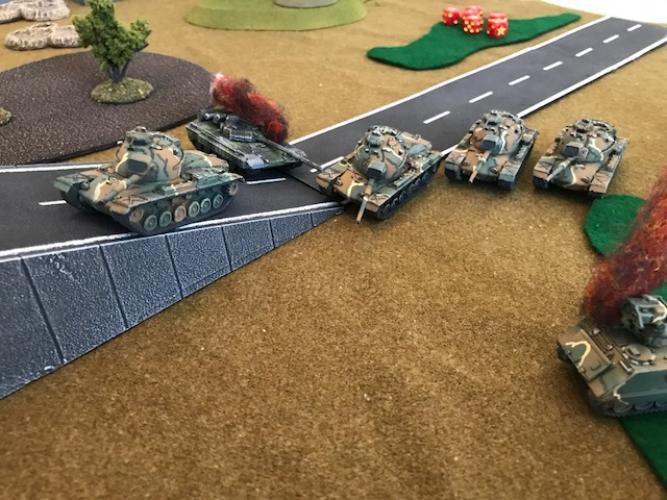 American tankers take the Soviets under long range fire, hoping to clear them off the objective. 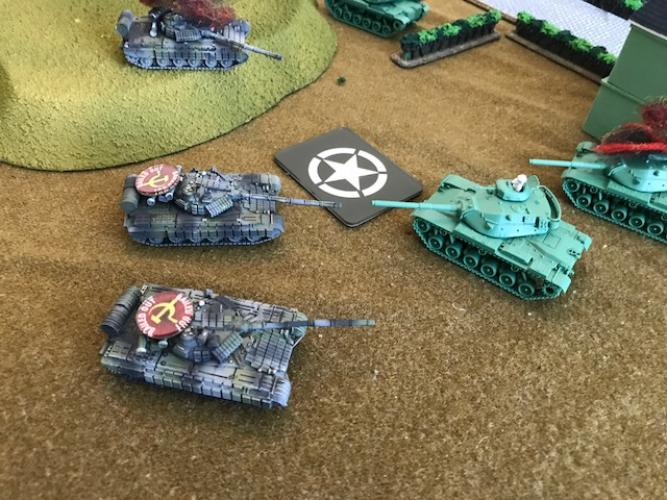 A valiant effort, but is it too little too late?

With Vorishnov taking cover from the American attack helicopters after they had sent a pair of missiles in his direction, he had lost track of the battle to the north. As the American fire died away, he could see new plums of smoke from a dead tank....but also dust clouds.

Another unit of T-64s had arrived! Following the lead of their comrades, they charge forward and engaged the sole American tank to their front from the march, brewing it up. With the Hinds taking the other American tanks under fire and his force to spread out to put up an effective resistance to the Soviet armored charge, the American commander ordered his forces to disengage to the south. 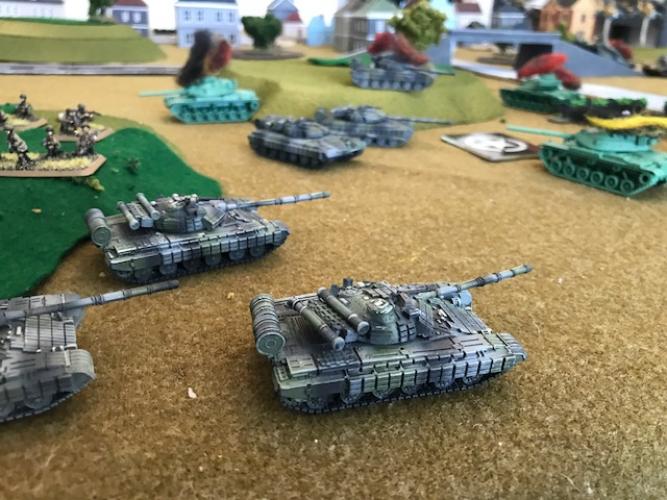 Soviet tanks arrive right where they're needed most. 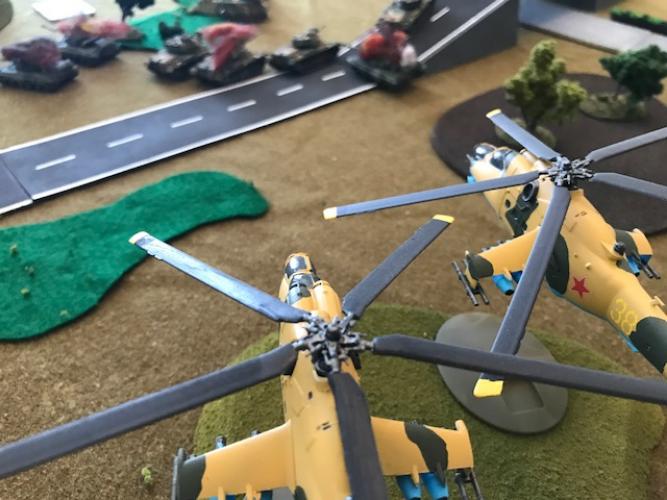 As the battle died down, Vorishnov took stock of the field of battle. As he caught his breath, he hoped that this time, his regiment would get more than a few hours to rest before their next action.

NON-NARRATIVE NOTE: The reinforcement shenanigans of this game were epic! Despite the random roll for objectives with this scenario, both my Jon and I got reinforcements exactly where we wanted them when we rolled for them. I've never seen more cooperative reinforcement placement in my life as a gamer!