Dawn along the Danish Dikes

Podpolkovnik Vorishnov was up early, but that was standard for a soldier, certainly during war. But this time was different. This time, after an all night march to the Amsterdam front, he and his men were to go straight from the march into action. Orders were to keep pressure on the Americans in the sector and prevent them from disengaging while other forces moved into position for the main assault. Vorishnov was both happy and dismayed at this assignment, happy that he was no longer assigned to spearhead another main effort, but dismayed that after doing exactly that so many times, he would not be there for the 'main event.' He sighed, pros and cons to both he supposed. 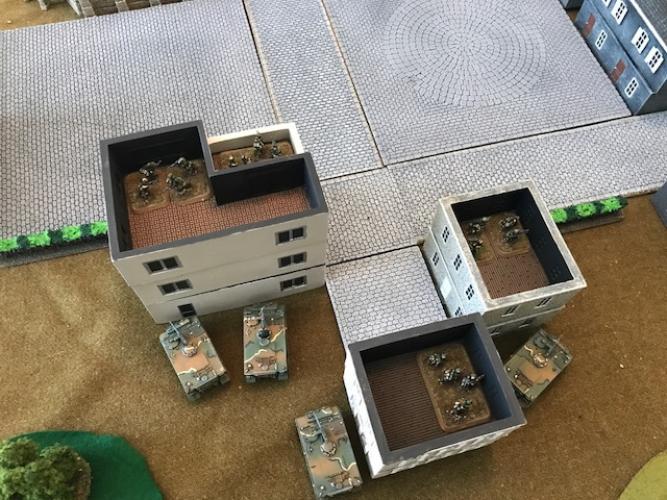 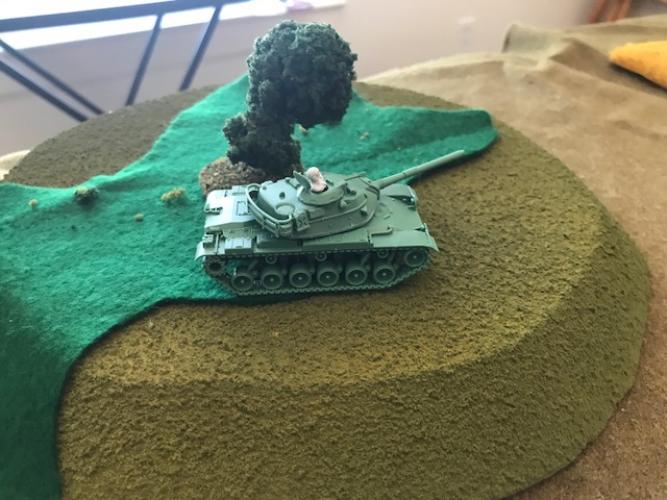 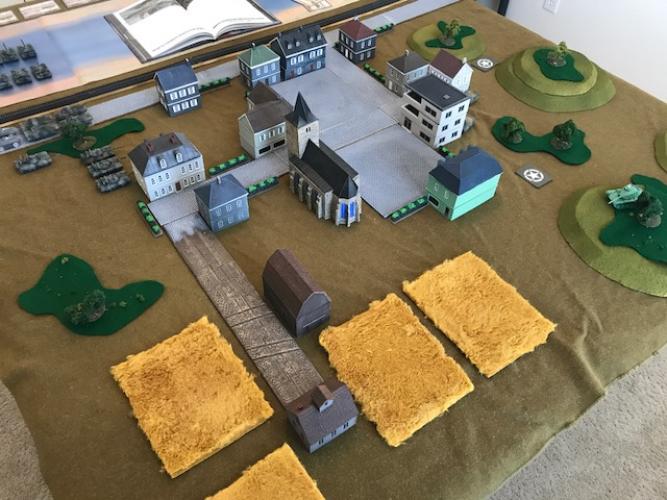 Vorishnov's forces cautiously advanced on a road that paralleled on the dikes. Probing forward in the pre-dawn darkness, he knew the Americans were here somewhere, but where. He got his answer soon enough, as the sound of revving engines and the crack of tank cannons illuminated the area in front of him. The Americans had used the darkness to ambush him! As the BMPs of his motor rifle unit took the brunt of the fire, Vorishnov ordered his tanks forward and for the infantry to dismount and seek the cover of the nearby buildings, hoping the Americans were not already there waiting for them. 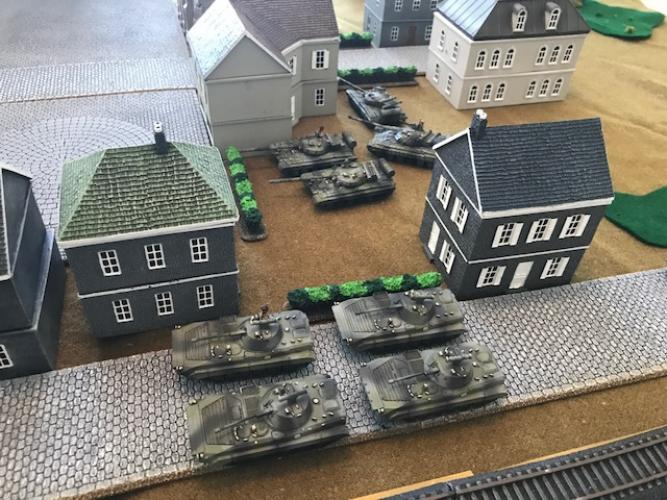 A cautious advance in the dark. 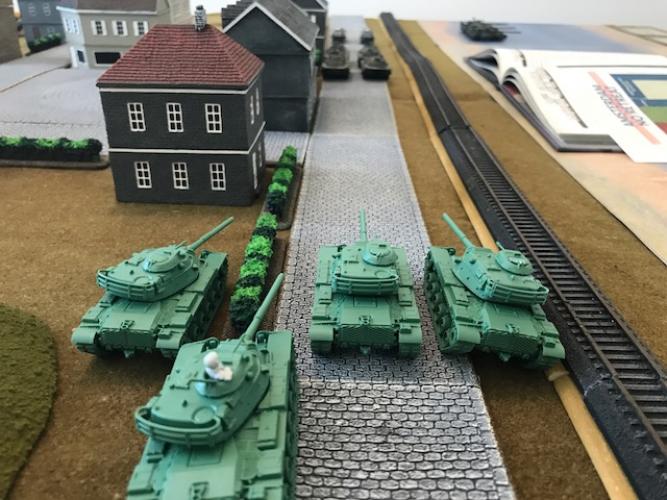 This is your Zero Dark Thirty wake up call!! 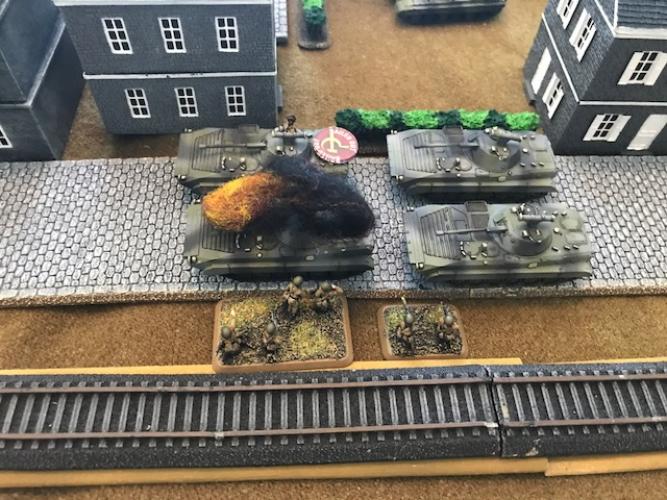 With the American positions highlighted do to their firing, Vorishnov and his tankers returned fire, begin a duel in the dark with their adversary. A lucky hit brewed up on the American tanks, further highlighting their positions. On the other side of the village, one of Vorishnov tank units stumbled into a lone American tank and in a panicked hail of fire destroyed it. 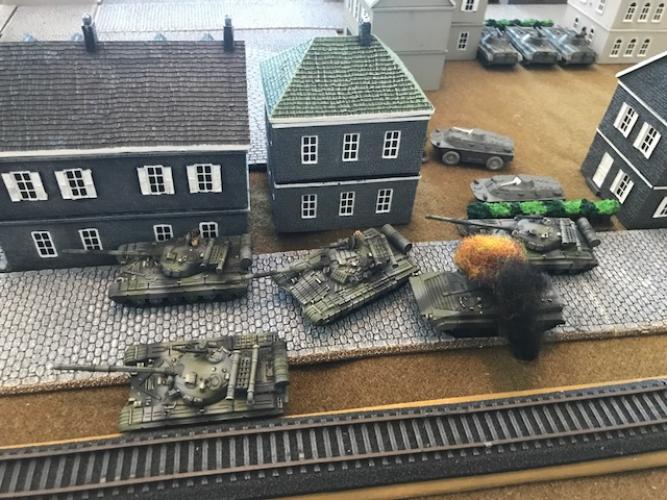 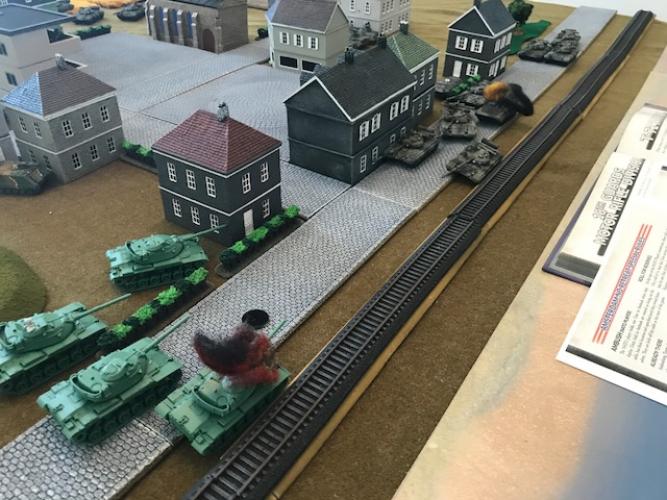 The duels in the dark begins. 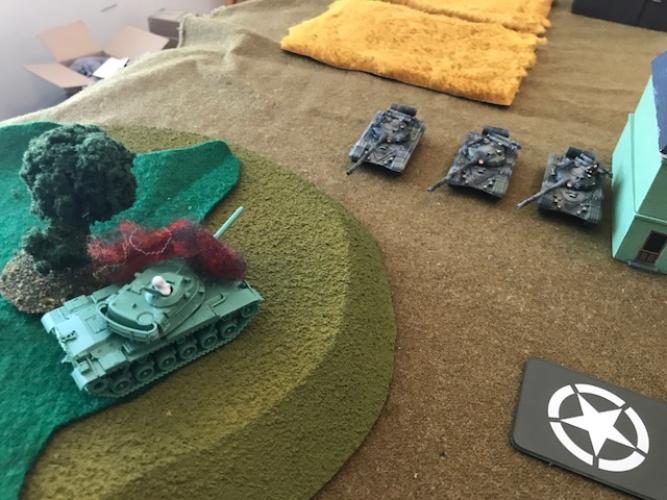 Oh crap, where did he come from! Fire, Fire!!

The American tanks continued to engage Vorishnov's tanks along the dike, firing at muzzle flashes and heat signatures, scoring a kill. To the west, the lone T-64 unit had little time to relax from their moment of panic, as a full American tank platoon emerged from the dark to open fire at near point blank range. 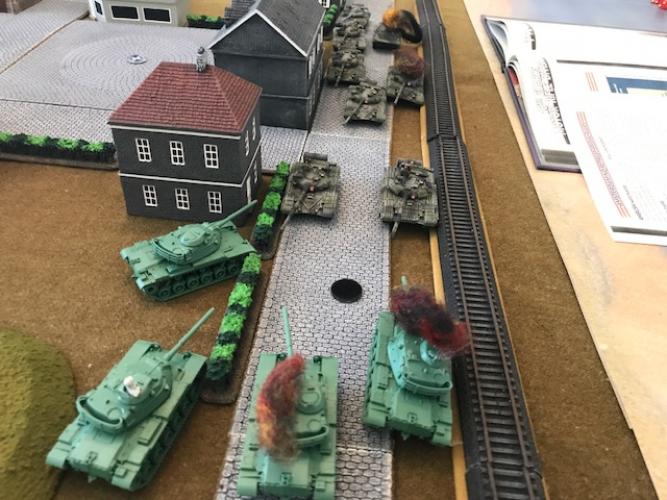 The duel gets deadly. 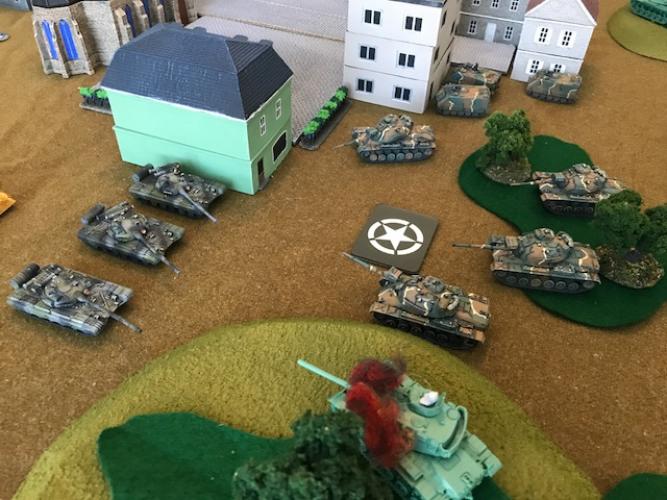 American reinforcements emerge from the dark.

Vorishnov ordered his BMPs into the village, hoping to take advantage of the dark to get them into firing positions while he pressed his tanks closer to the surviving American tanks. But the dawn arrived before they could get into position, and the American infantry that had been silently waiting in the village opened fire on the now vulnerable and in the open BMPs. The American tanks to the west also used the new dawn to close and destroy the T-64s to their front with precision rapid firing. 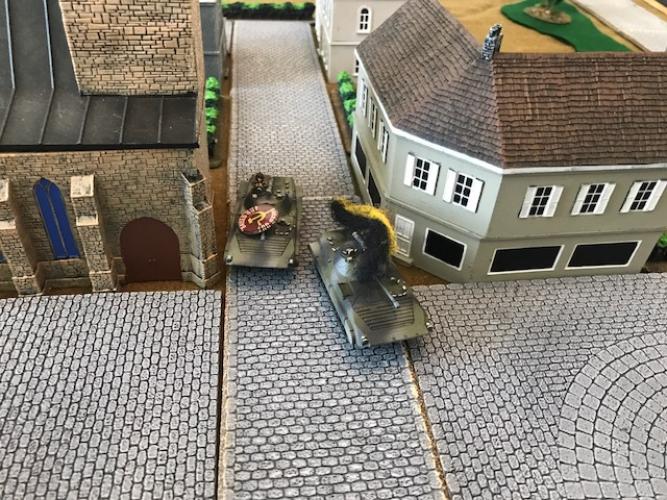 With the dawn comes death. 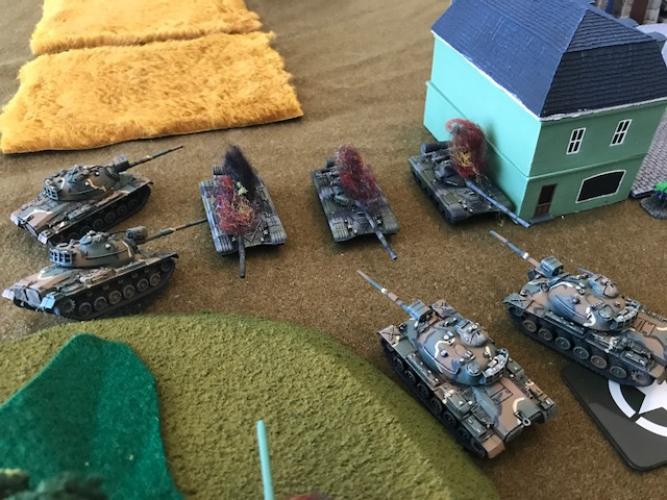 Not even Soviet armor can stop that many rounds at that range. 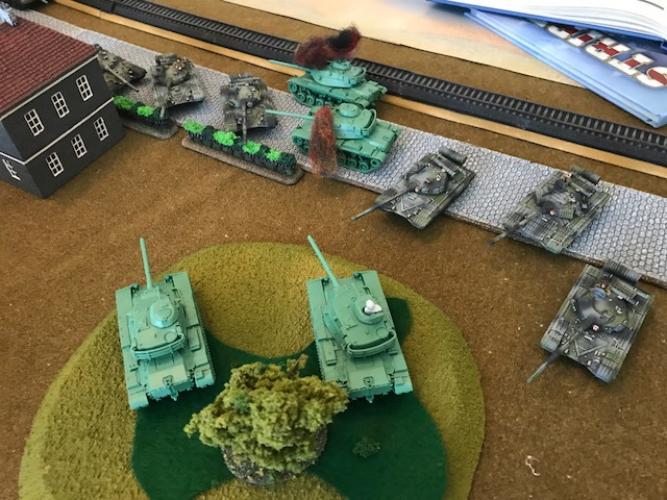 Vorishnov takes advantage of the American occupation to the west to close with the enemy.

All was not lost yet. Vorishnov ordered his motor rifle troops into the village to root out the American infantry, while his tanks, having dealt with the last of the M60s near him, circled around and engaged the American transports. With tank shell and AK, the Vorishnov's forces moved onto their objective. 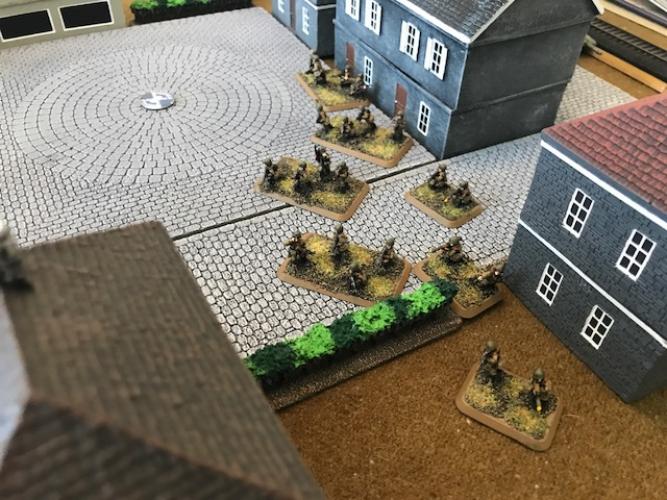 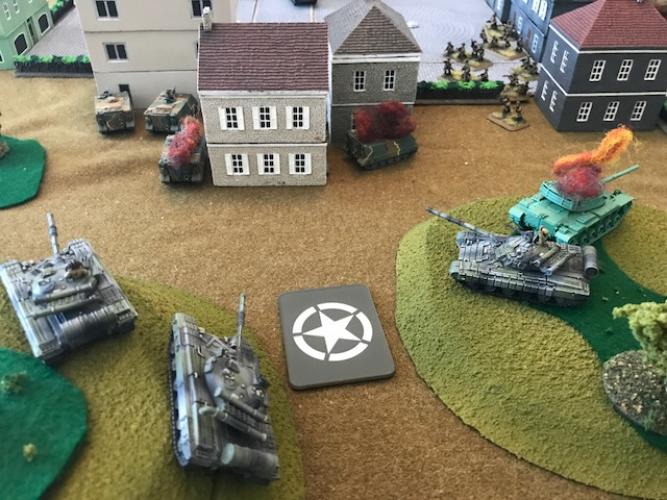 "Cover the infantry! Take out the transports!"

The motor rifle troops hit the American infantry like a sledgehammer, attacking the end of their stretched out line. But the Americans were made of stern stuff, as with a call of "Bayonets!!" the Americans counter-charged.

Back and forth the melee went, with neither side backing down from the fight. With grenades, bayonets, shovels, fists, and anything they could (Vorishnov swore he saw an American use his AT missile launcher as makeshift club), the two sides engaged in a swirling combat that seemed to last an eternity, but in reality lasted less than a few minutes. By the end of it, a few Soviet infantry remained standing to claim 'victory.' 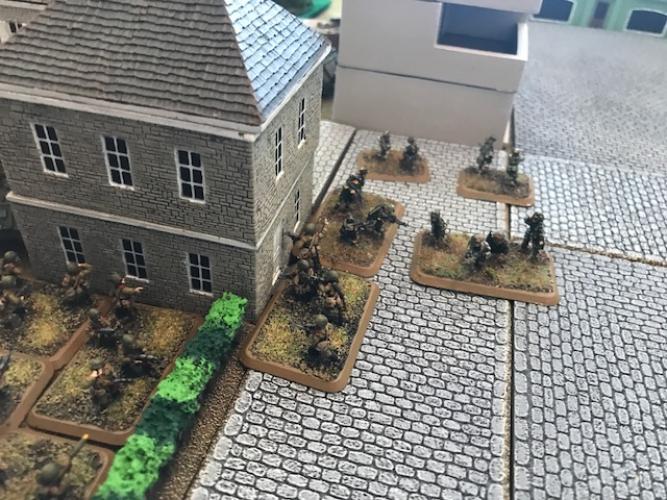 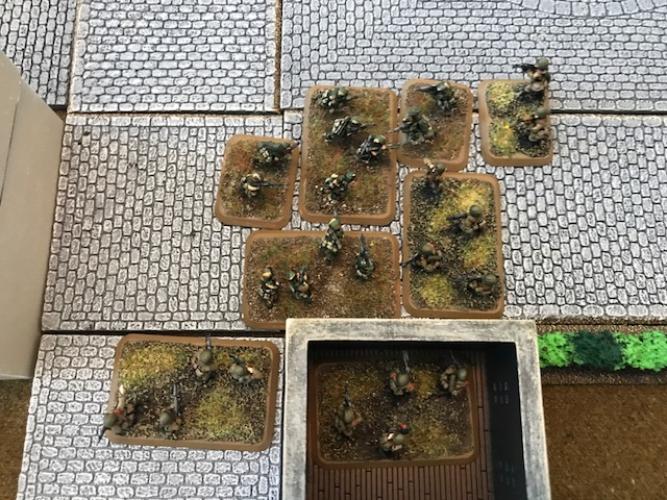 The melee rages back and forth.

As the dawn turned to full daylight, Vorishnov could see the remaining Americans to the west, pensive to approach, as if waiting for something. Whatever it was, Vorishnov did not know, but eventually the Americans disengaged as the sounds of battle further west signaled the start of the main effort for the day. Vorishnov had succeeded in tying down the Americans here for long enough, his part in the day's action was done.

NON-NARRATIVE NOTE: Phew, what a fight. The infantry battle was one for the ages. Both sides did not fail a counter-attack roll and both sides managed to kill a stand with a missile team in CQC. Nothing like clubbing someone with a missile launcher! In the end, bad dice rolls to hit for Jon doomed him, but man did his guys hang in until I had to wipe them out.

As for the end, Jon had another M60 platoon in reserve and had bet that they could arrive in time to save the day on the right flank, but alas here too his dice betrayed him. Had they showed up, he would of had at least one of my T-64 platoons dead to rights, and while I had a another platoon nearby, chances are with the other platoon still intact on his left and my poor beaten up motor rifle platoon, he could have pulled of a win. Another great game that was real close at the end.