Fought At Amsterdam
1616 days 5 hours ago

Shoot out at the OK Overpass

Soviet forces had a busy day with an organized tournament featuring all missions from the Stripes campaign. My second action of the day was in Amsterdam. Having fought in this area once before amongst the windmills, this time we pushed closer to the city. 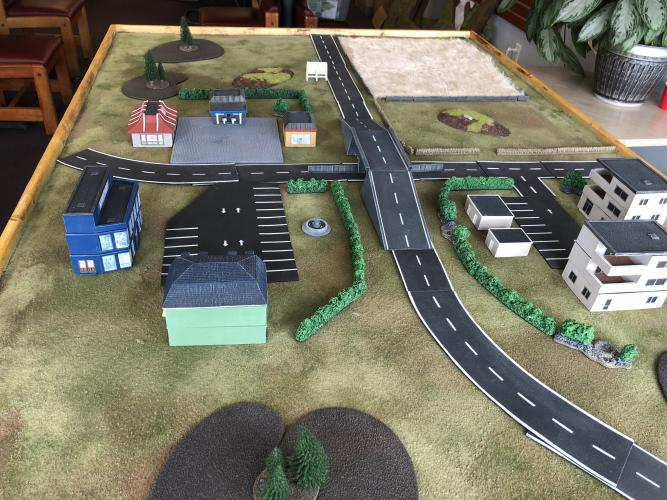 Initial recon photo of the area. Given we would be attacking long edge to long edge and most terrain was approx in the center we'd once again have an interesting time depending on where the minefields might be place.
As luck would have it, the Brits decided to defend on the side closes to the camera. I decided my plan would be to press up the side towards the apartments hopefully drawing their forces and then as my reinforcements arrived bring them up on the opposite side. 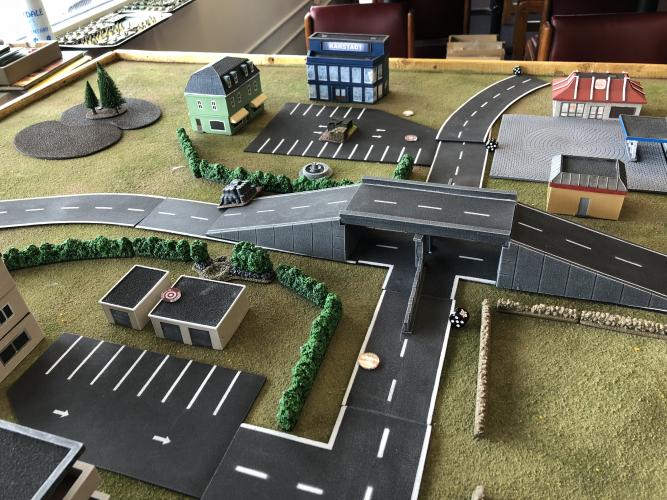 The first objective was located just on the far side of the overpass. The other objective on the other side of the road next to the cafe and kaufhaus. 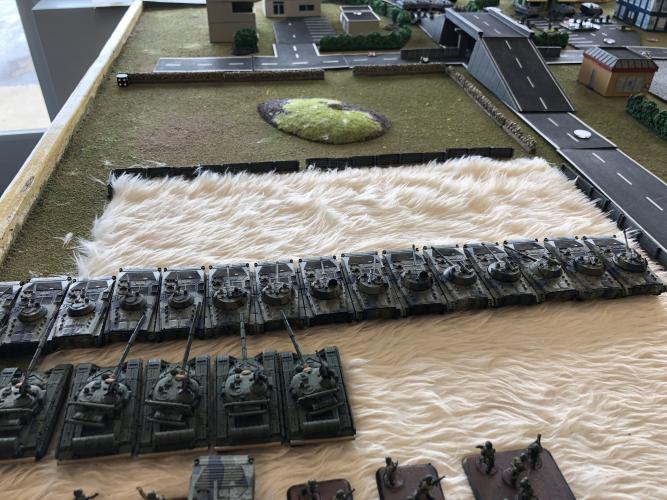 Predawn, forces are at their go points.

Soviet intelligence forces were able to create a time lapse of the action. We deployed a medium sided BMP-2 company with a grenade launches, a small BMP-1 company with a Gremlin upgrade and 6 T-64s with missile upgrades.

In the far apartment building agents had indicated was the British HQ. We pressed our attack very hard with the intent of taking that building as first priority.

With the first objective located just on the far side of the overpass, the men thought they would easily be able to context within the first few moments of the battle. British Abbotts were just behind the objective a British infantry platoon in front of that with 2 milans holding the objective.

The key to this infantry fight would be taking out the British HQ, then Abbotts and the force on the objective. If accomplished quickly they would not be able to act.

The BMP2s raced up and by turn 2 dropped their infantry. Together they would press the attack from parking lot. The BMP1s went around behind the left most apartment building. Their infantry got out and entered the building to lay down suppressing fire in support of the assault. The BMP1s kept their eye out for chieftains which were supposed to be in the area, yet not seen.

As dawn was not far the air was thick with bullets and burning BMPs as British milans and other infantry antitank assets found their mark. Unfortunately a hail of machine gun fire pinned down and created many casualties. The men did not assault quickly and it cost us dearly.

Soviet reinforcements were quick to arrive. Before dawn broke, Gophers (4), Acacias and Storms had arrived.

As dawn broke a harrier air attack landed catching many and costing us a few more BMPs as well as stands of infantry. This did not deter our resolve nor change our plan. With BMP2 fire, and infantry fire, we very quickly were able to take the building. Now the attack could move on towards the objective.

Approx turn 4/5 chieftains ambushed the BMP1s. They didn't have a chance. It did however mean the chieftains were poorly placed to participate in the battle and quite a distance away from our T-64s which started to lay down long range fire on the British infantry up on the overpass. Brutal guns are brutal.

I gave orders to ignore the chieftains and concentrate on British infantry carriers, infantry and the abbotts. Priority had to be for the infantry to get in to take the position.

The BRDM2s arrived and we push them down the road quickly, getting ready to assault the position. Surely they could get in and quickly take the objective. In support a couple T64s started to pick off their artillery from long range.

Just then, more harriers appeared in the sky. The gophers launched several missiles, scoring 5 hits and shooting them both down. No more pesky British air.

Unfortunately also no BRDMs while valiant they were quickly blown up. The position was not ready to take yet. The chieftains also struck and took out one T64 at nearly max range. I moved my T64s up and around such that the cheiftains would have a long drive if they were going to get another shot in the next turn. The small infantry unit and BMP2s took out the remainder of the British artillery and 432s. The objective would be ours. 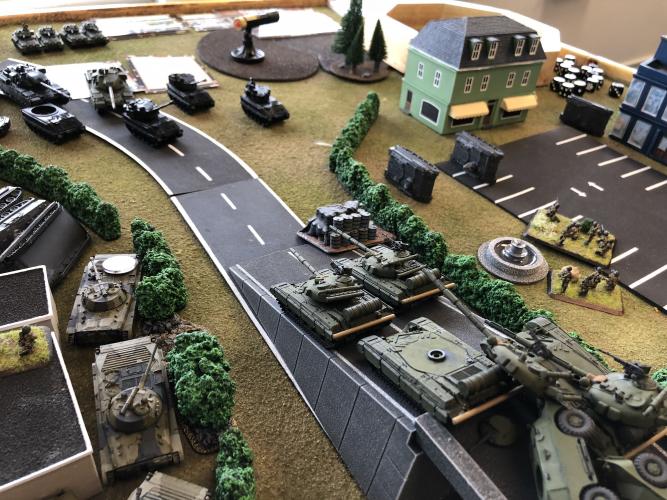