A look behind the big map, or why Comrade Khan sometimes is prone to rant… 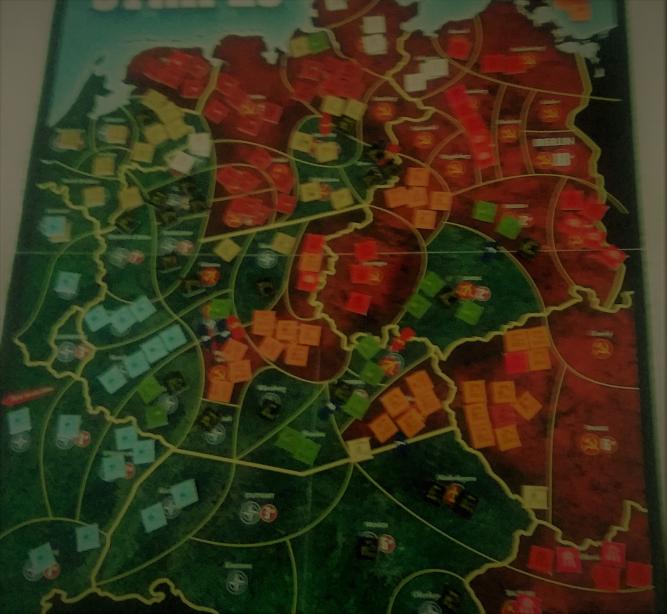 Again there being no better way to share this information, so a battle report. Maybe next time.

I like to write 'historical' perspectives when I publish battle reports. In order to do that, I had to figure out where everybody was. So I took two games I own, Victory Game's NATO and Game Designer's Workshop Third World War and populated the map. The reason for using two games is to make some of the counters distinctive so they show up in the picture. French are light blue, Americans Green, West Germans black, Brits, Dutch and Belgians in khaki with colored unit symbols which are unreadable at this level. PACT from VG games are dark red and orange, distinguishing between 1st Western Front and 2nd Western Front, but the counterset from NATO had an organization out of a PACT Forces Army FM that was incorrect by 1980 much less '85 so I used white with red counters for the Poles, the actual counters from GW for the 16th Army arriving up the Danube from Hungary to protect the Southwest TVD's flank from German interference in Austria (have no idea why STAVKA invaded Austria).

Evaluating how the map changed was a little bit difficult, but in the end I decided to count the number of territories belonging to the sector in the on-line campaign and assign territories based on current control percentage. This causes some issues in the big sectors of Hamburg and Bremen etc because in theory you would have to have 100 percent control to actually take over the territory. I solved that by leaving troops in the territory proportionate to the degree on control when it locked.

The top level OB is the OB file. I encourage those interested to read it. I skipped unit numbers because VG, GDW, my own research and others research is a work in progress, mostly because the 'low hanging fruit' is 1989 because of the CFE reductions talks. The OB generically follows Suvurov's postulated 'standard' organization. There are 71 division flags on the PACT side at this point.

NATO has 7 British, 3 Dutch, 2 Belgian, 11 German active, 4 German HSK divisions, 10 US divisions (8 heavy, 82nd and Marines), and 15 French 'divisions'. The French alone among NATO had retained the 'Pentomic' division structure of the '60s as a prestige matter, I think, and so did many others. In point of fact it took three of their 'divisions' to match the combat power of one German.

Not populated on the map are 20 Soviet Divisions and two Unified Corps (the later already sporting T80s) waiting in the wings. Obviously BF/BOW decided that the 3rd echelon was being delayed by political/strategic considerations. (It wouldn't be much of a campaign if they got dumped, even now)

Also not populated on the map are two US heavy divisions coming by 'fast' sealift. Bringing two additional Marine Brigades pushed these troops down the TPTFDL.

The map depicts the adjustment after the first week of combat. Control went up and down but only Leipzig flipped, propelling NATO forces into 'Dresden' on my map. 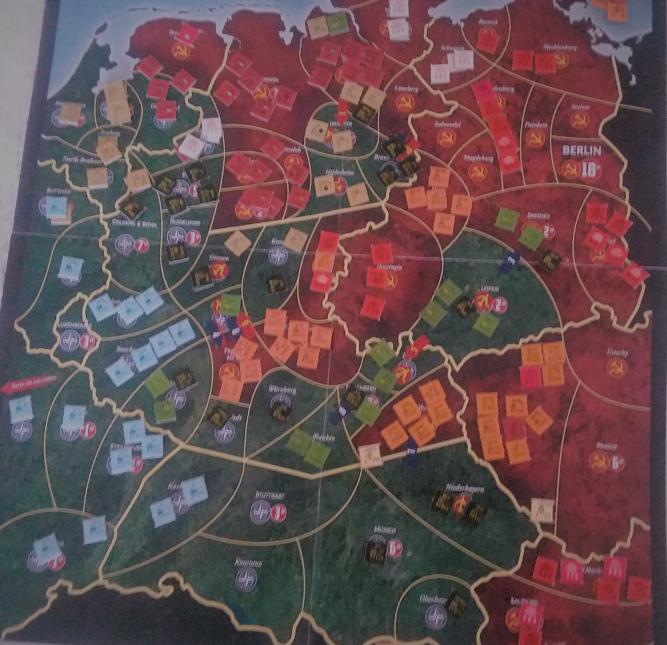 This is the position that existed during the second week. NATO is knocking at Berlin's door, but at the end of a 500 kilometer supply line with the last 250 connecting through railheads in HOF. PACT has moved control in Amsterdam up to the 50/50 level, threatening Arnhem. NATO is building strength in Hamburg 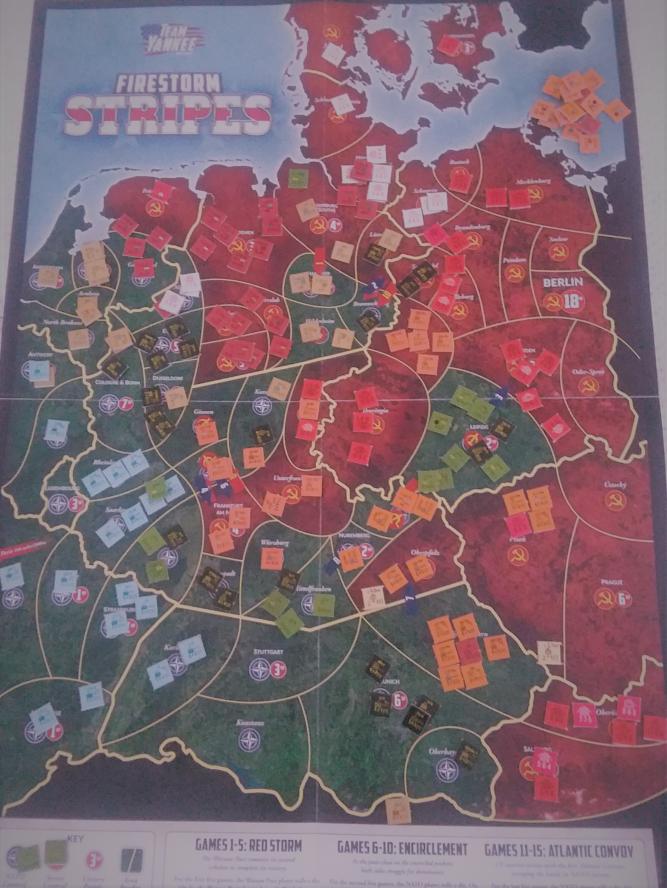 Ending last Friday. Note that Hof locking for PACT pushed NATO troops out of Nuremburg and Hof on the detailed map, severing III and VII Corps and a large part of II German Korps from their supplies. Also note that there is a solid line of troops from 28th Army and the reconstituting 8th Guards plus 5th East Germans between the 'pocket' in Leipzig and Hannover. Not open territory. Neiderbayern's named territory is now in PACT control for a while.

At the same time, the troops in the Hannover pocket have taken the offensive in two new directions while still having to garrison the pocket and Hamburg against attacks from essentially 300 degrees of the circle. Risky business. Especially since PACT control of Frankfurt is up to fifty percent. Hard to judge what that means really, but in a simple minded way the Frankfurt sector includes all those territories occupied by the French WEST of the Rhine, so unless NATO is willing to concede PACT over the river into the American and German logistics, logically PACT would control the half east of the river...including Kassel and Giesen. Once again cutting the rail lines to Hannover and any tenuous hope of supplying Leipzig. This is what you are seeing on this map.

Note that I'm not suggesting the campaign is won, lost, or whatever, or even that it should be. What I'm doing is explaining how I develop battle reports from my appreciation of the 'real' situation, and why I sometimes see occurrences that get me up on a soapbox about logistics and correlation of forces.

1 Person Has Recommended bayankhan For a Commendation