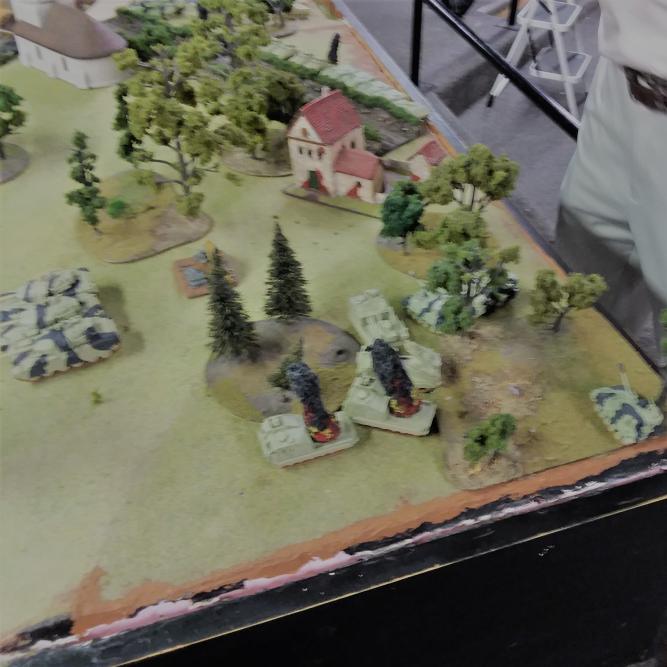 We HAVE ENDEAVORED TO PERSERVERE 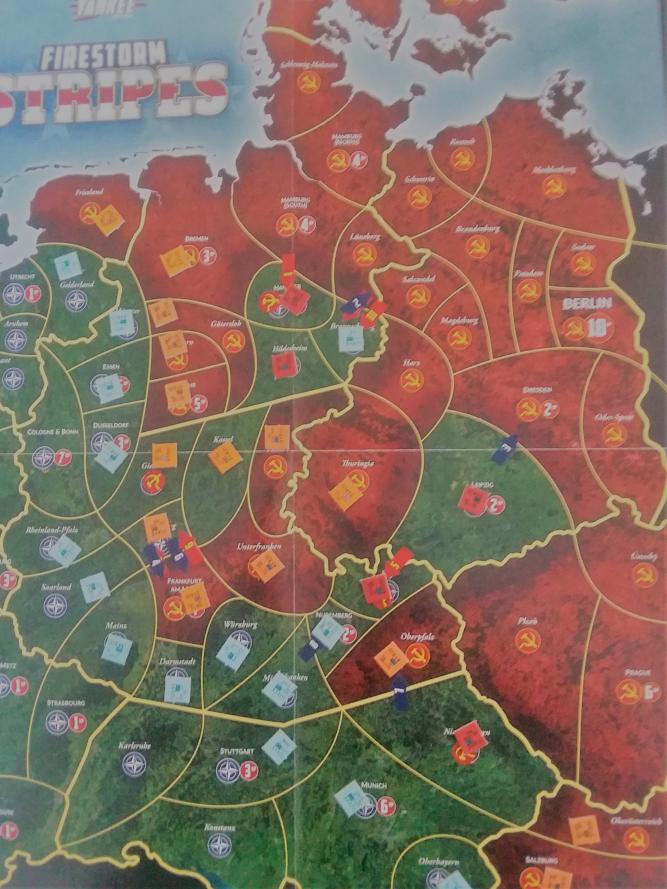 I had admired others who published their store campaign results, and equally prefer that the BOW team have a Forum separate from battles to cover this feature. Despite suggestions in the Thunder campaign this hasn't happened yet, so here's where we are. 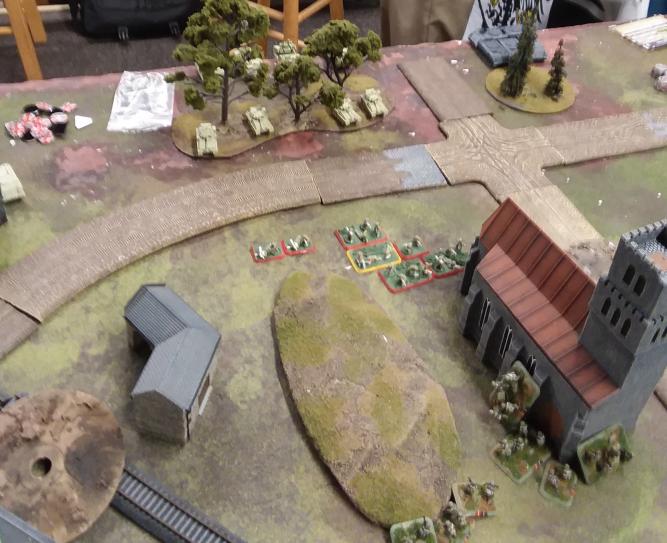 You'll have seen most of these pictures before. Some of them upside down. That at least, with help from BOW and some of you, I've fixed. We played four games the first Friday, our high water mark, as some people have drifted back to Flames to prep for tournaments, and others have been too busy.

I played in two of them, thanks to a late arrival from Tim H. This picture is from my first, a win offensively in Hamburg-Hannover. Thanks to miscommunication between me, the store and BF we didn't get our campaign pack until yesterday...so we used the rules from Thunder campaign pack's last phase to assign battles (50-50 PACT Offense/Defense). Also automatic two-territory advance in case of offensive victory. I won both battles, carrying Hannover for Team Red, and repulsing NATO at Leipzig for a lucky gain of the attacker's territory. Stefanvich tied with Green Howards at Braunschweig, and Brusilov fought Fitzi's M60 horde to a standstill in Frankfurt in what we laughingly now call First Frankfurt. Brusilov posted his report; Green Howards and Stefanvich still have to post theirs. Tim H is too busy traveling for his job and I no longer expect him to post and Fitzi's recent job change makes his posting extremely unlikely. C'est la vie. 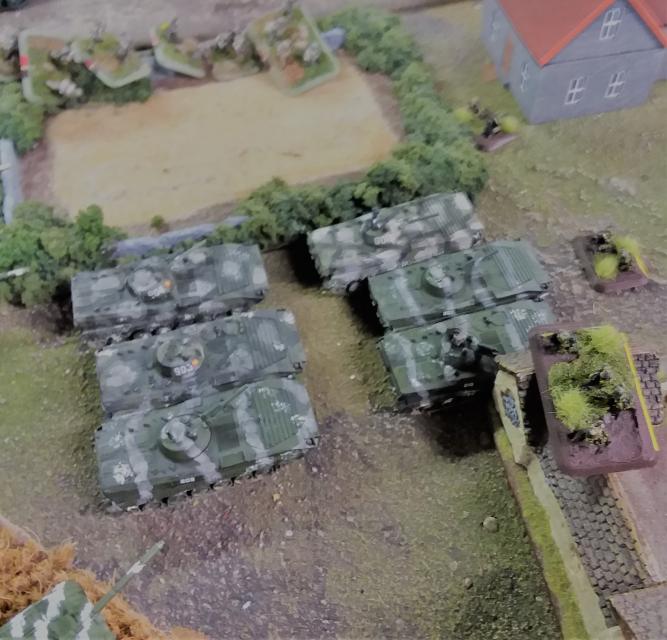 My offensive win at Hamburg/Hannover sealed off the British garrison in Braunschweig and NATO had been rolled back in Leipzig. The next week we managed to get in 3 battles. Green Howards was off at Wolfkrieg, so the fights boiled down to me and Fitzi, Brusilov and Fitzi, and Stefanvich and Al.

I won an offensive victory in Hof and carried into Nurenberg. Stefanvich fought a maneuver battle defensively and won, carrying Niederbayern. Brusilov and Fitzi fought 2nd Frankfurt, placing more ruins on top of ruins in another tie 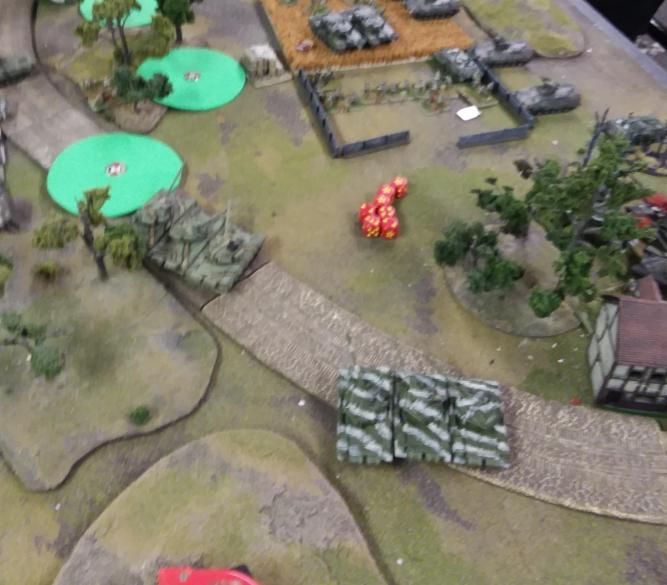 Third week. Getting thin on the ground. I played Dave and won a defensive counterattack victory, earning a territory, taking Kassel. Stefanvich attacked Rob, suffering a defeat, and losing a territory. Green Howards wasn't able to get in a game because of the long drive home, and the rest of the Stalwarts rested their minds playing Blood and Plunder. Clearly battle fatigue was setting in 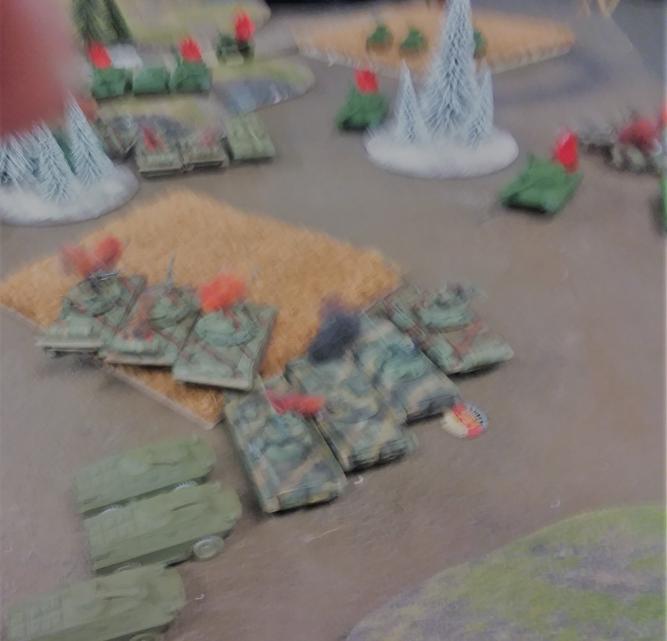 So looking forward to the next and final week, we see PACT with 6 victories and NATO with one

Which leads us to the above map. The battle arrows and changed control markers didn't show up very well in pictures, so I got out the counters from my trusty old NATO game to mark the battle lines. However, there is a message here...the light blue counters are the missing French faction's potential reinforcements, while the Red and Orange counters are missing PACT reinforcements by this point in the war. Each French unit is a brigade-sized formation misnamed 'Division' with 5 or 6 maneuver battalions while the PACT formations are divisions. 20 pact Divisions versus 15 French brigades....draw your own conclusions on how the war goes from here