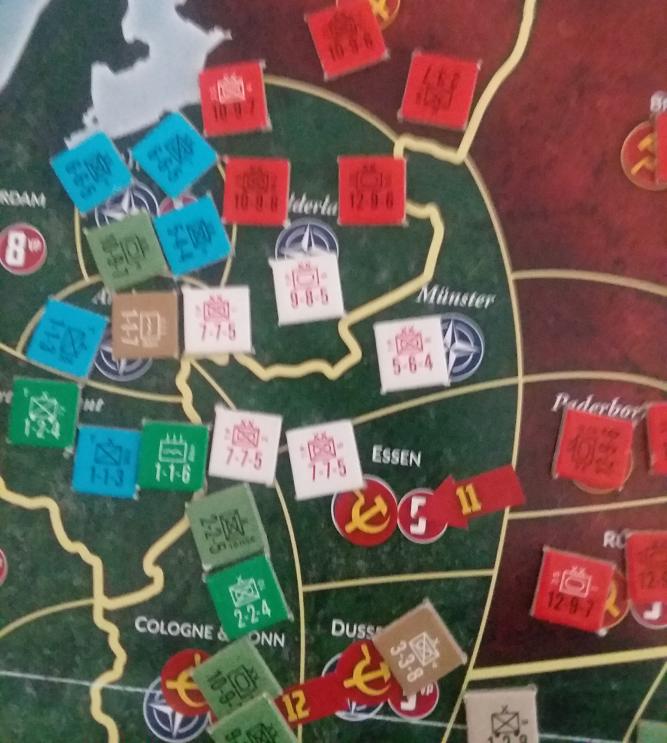 As fighting along the Ijssel stalls, the 5th Dutch Division shifts south to seal off the PACT penetration and encounters 3rd Polish Motorized east of Nijmegen

Pulkownik Niktnie was disappointed but not surprised at the direction from Army HQ. Intermittent fuel deliveries meant the attack was taking too long. 1st Polish Army could do one thing at a time, and driving further west was just exacerbating the problem. Fortunately considerable stocks had been built up during the ceasefire so the situation was not yet serious, but holding a couple thousand hectares of Dutch farmland was not worth the expense. 3rd Poles had been instructed to cover the withdrawal of 1st Poles back to Germany, and now Niktnie's command was disengaging as well, after supervising the removal of usable stocks from a Dutch depot at Berghem. The NATO artillery and tank ammunition was now burning in the distance, the fires spreading to the town itself. And the Dutch 5th Division, doubtless infuriated at the resulting damage, was trying to cut Niktnie off. He would have to run a gauntlet to regain his infantry screen while protecting the last of the support echelon vehicles. 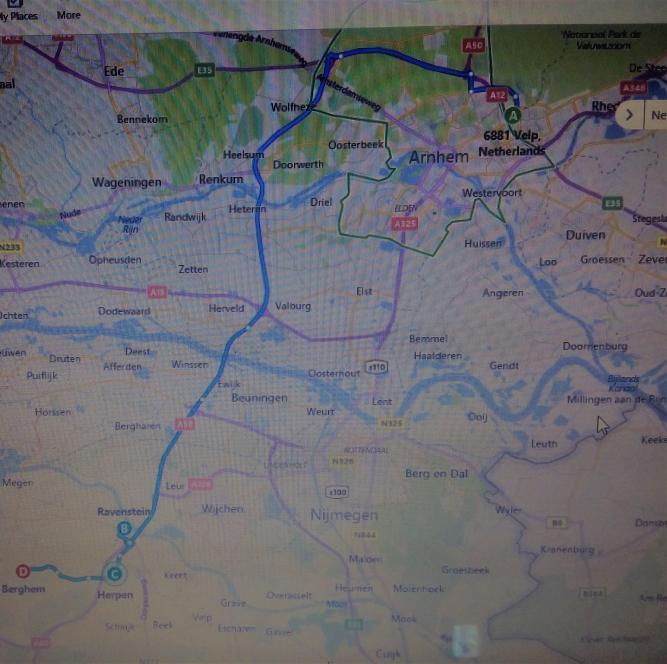 Same sector, with the fighting going on to the east of Nijmegen in the gap between the Maas and Waal Rivers

We played Gauntlet as it seemed like a logical continuation of the last E-battle. Also looked like a potential bloodbath. Again, the counters on paper maps are the battle. I went for the Poles instead of the mixed list of last time. BH played the same Dutch force with a different arrangement of platoons. 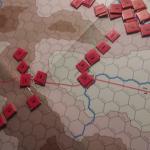 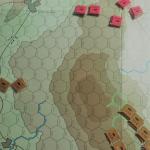 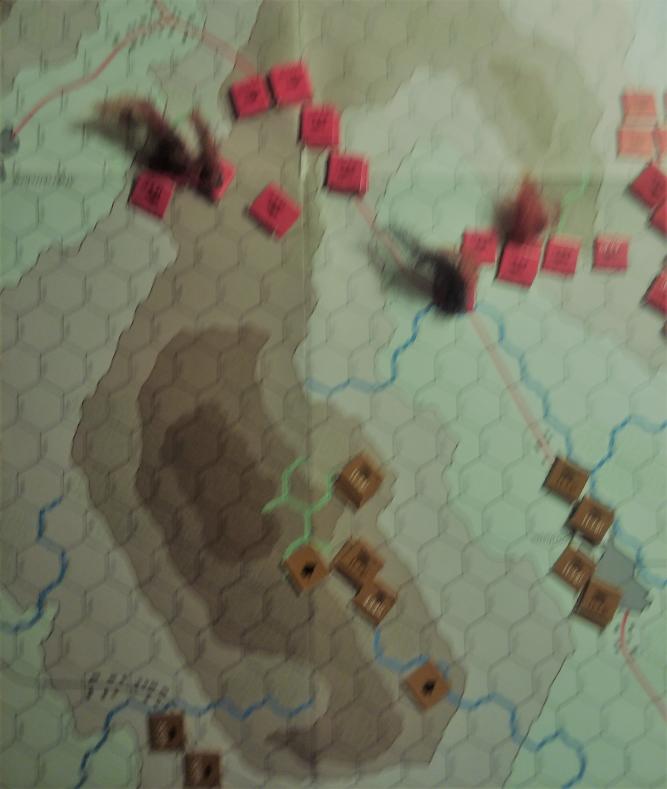 BH pushed his command tank and 7 others down the hill; unfortunately one bogged on the way down, in the open, naturally enough. These tanks had no targets. Four tanks remained on the ridge as a base of fire. His four tanks on his left flank lit up one of my T55 companies, killing all three. Point, BH. In my center he wrecked two Spandrel launchers but the third passed morale, and destroyed one BMP1 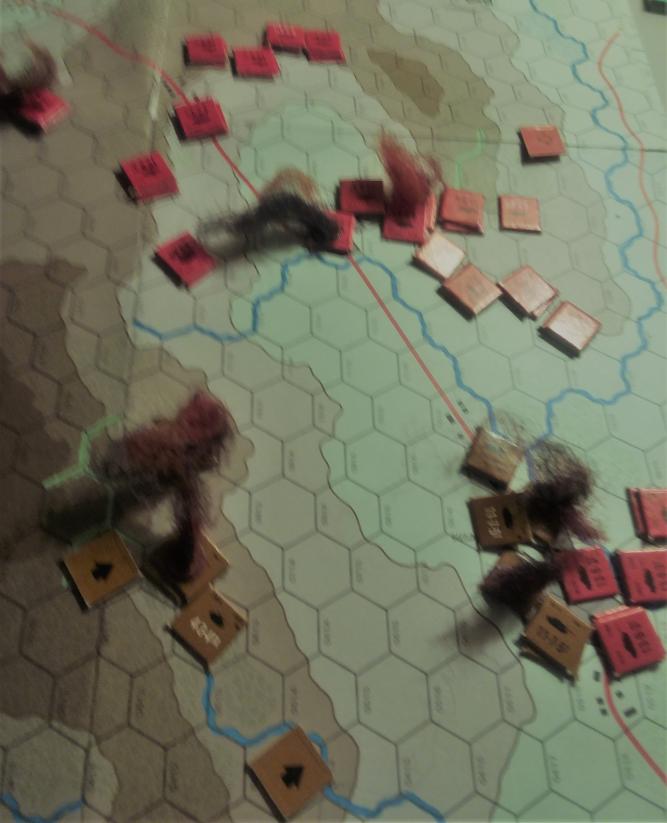 My move was to blitz the T55 companies on my northern flank, successfully, then move them to firing positions contesting the objective. The T72s came out from behind the hill, placing the woods between them and the Leos contesting the objective. I also blitzed the survivors of my southern flank save the single tank that could shoot at the Leos there, bringing them to firing positions. The T55s next to the object managed one hit, average, and killed their target. The other tanks on the crest managed a couple more kills in the town. The T72s, and 5 BMP1s, attacked the 4 tanks left up on the hill throwing 14 dice and destroyed them all. Point, BK. 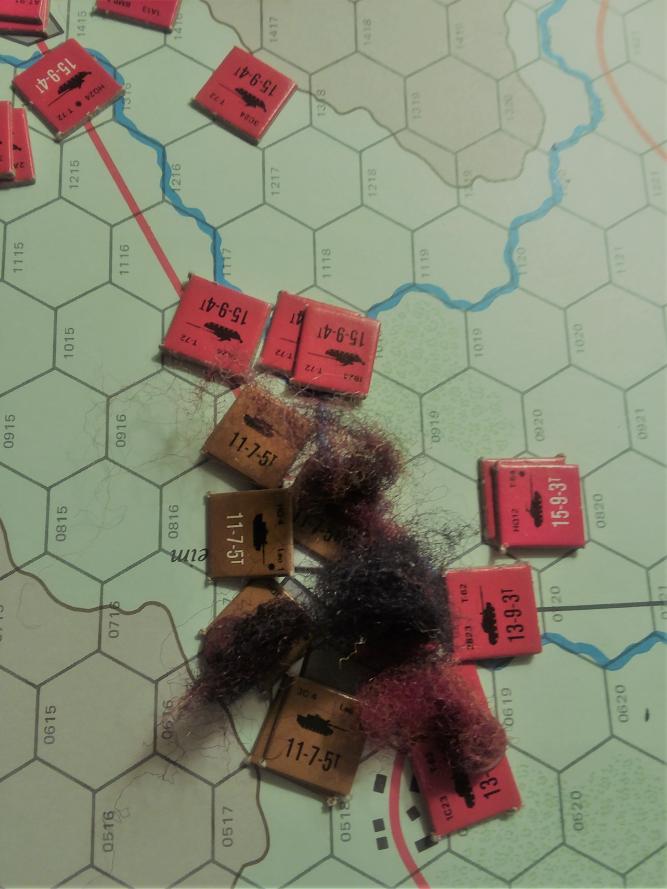 NATO's second turn...went poorly from the start. BH tried to disengage the Leos on the south side of the ridge, and bogged two. The other two ran at terrain dash but were, of course, in no position to influence things. BH tried to move his YPRs into good firing positions but one platoon failed blitz and the other bogged one vehicle. He had four Leos in position, fired three at my closest T55 platoon, killing all three...average when he need brilliant shooting. Then he fired the remaining tank at a nearby T72 for two misses. The YPR that had a shot hit a BMP1 for a bail. 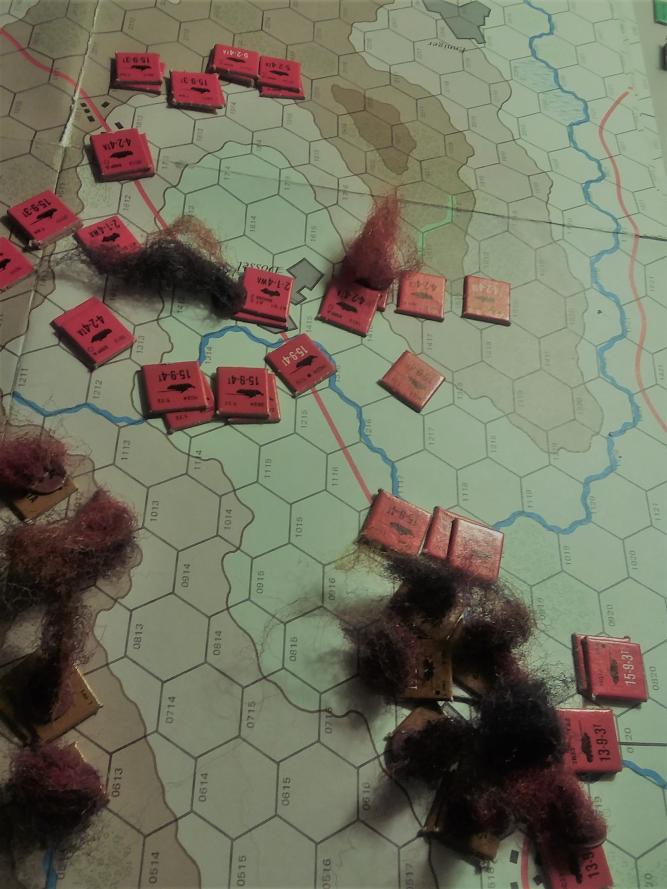 Since BH had not cleaned up all the tanks that were contesting objectives, all I had to do was kill or bail 4 tanks. So that was my focus. Everything that had a firing solution sat still, everything else moved, even BMPs that could only penetrate/damage on a 1,2 save. With 10 T72s still engaged, 4 T55s at close range, 4 BMPs at long range with missiles, 4 T55s at long range, and 2 BMPs at close range, each target got hit by 5 dice. A couple took 3 hits, only 1 took 1, and its hit wasn't 73mm, so its bail was assured. Ultimately all 4 Leos blew up, game over. 5-2 PACT

Hot wash
BH probably made his error when he deployed one platoon of Leos to the south. They did handsomely shooting up a 'company' but weren't present for the decisive fight. Since meeting engagement rules applied, BH finished setting up well before I did. He had to worry about me setting up on the crest of the ridge with my T72s and being in firing position with all of them on turn 1. That force made it too risky. But after set up they should have cruised to support their buddies instead of cherrypicking T55s. After that it was dice, and I had him outnumbered 2:1 and didn't underperform (no Gulag ammo this time). 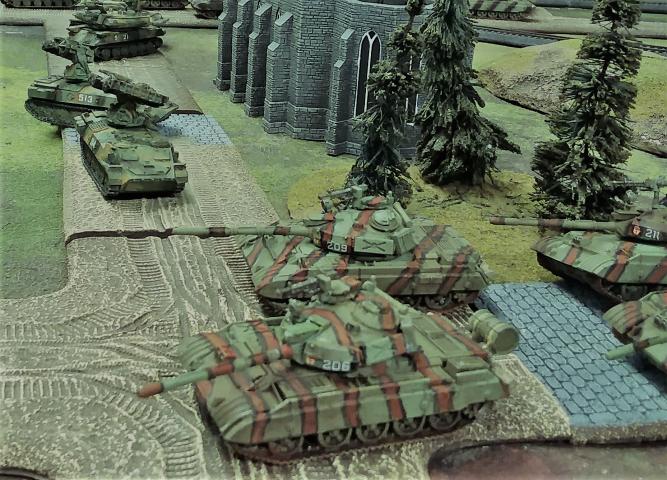 Yes, I do own all the PACT models depicted on the map, just not the NATO ones. Perhaps next campaign, can do something a little different

Pulownik Niktnie shook his head. 6 T55s had been knocked out, plus two BRDM AT systems, and 1 BMP. Two of the T55s had been total losses, with 5 dead crew. Two others could have been recovered if he had the time. At least two were moving away under their own power, one with a damaged fire control system and one with the engine coughing and sputtering. His crews were transferring ammo out of the broken tanks preparatory to leaving, and stripping off the lasers. One Spandrel was reparable, the other just melted parts. That one, they could tow. The Dutch had lost a dozen tanks and two of their cavalry vehicles, all burning merrily after his scouts pulled the wounded out of the ones that hadn't caught the first time. Better for both sides if we hadn't meet here.