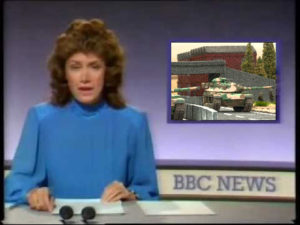 Good evening. This is Sally Sparrow from BBC World News reporting from Leipzig.

Our American allies are move forward again, pushing towards Berlin, but as they move forward the enemy seeks to cut them off by a thrust linking Frankfurt and the Ruhr. Our forces are fighting for every inch of ground we are taking, but we cannot afford to let the enemy get their talons into our supply lines.

Every day we are reminded why we are here. Evidence of the Warsaw Pact oppression surrounds us and we see the real damage it has done to the civilians. Those who, against the odds, made their way through the Soviet lines have painted a dark and grim picture of life in eastern Germany. They remind us the very freedoms and rights we are fighting to protect. 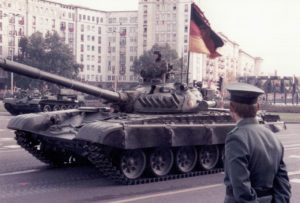 Soviet Tanks attempt to cower the population of Essen

We are moving back to cover the fighting around Frankfurt. We have heard terrible tales of the devastation there. We hope that they are exaggerated, and that the troops there can hold on long enough that we can put a stop this terrible war. You would think that after two major wars, the world would be done with bloodshed and cruelty.

This has been Sally Sparrows, BBC World News.