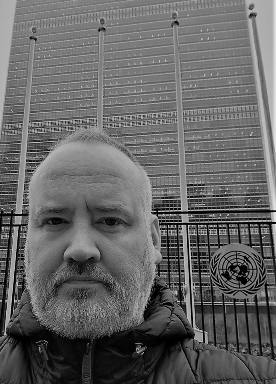 General-Polkovnik Red Alert in front of the UN Headquarters.

The soldiers of the valiant Red Army continue to fight the capitalist NATO forces. In the past days, NATO forces led by the USA have attempted to capture Berlin. We now know that they always planned a war of aggression and would have caught us off guard if our leadership had not made a pre-emptive strike against their forces build up. We can inform you that the battle lines are fluid and confusing. We still hold on to large areas of West Germany but part of our forces has just repelled the invaders from Berlin and continue to push the forces of aggression out from Brandenburg and Leipzig theatres.

General-Polkovnik Red Alert led our delegation to the UN peace talks in New York. This turned out to be a propaganda ploy by NATO as they were unwilling to enter the talks with any seriousness. Their delegation behaved with customary arrogance which was easy for them since they are far removed from the suffering their war causes. It was an inspired choice to send a frontline commander against these bureaucrats who have no experience of war. Red Alert has now returned to the warzones and reports have arrived that he has already pushed back the invaders in Brandenburg and Hamburg theatres. 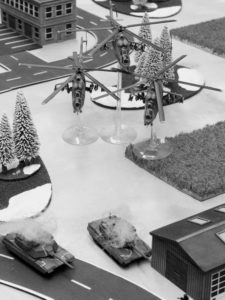 Krokodil attack helicopters are the bane of NATO tanks

The heaviest fighting is reported to be in North Germany from Frankfurt to the sea. Our troops are fighting bravely and they are supported by the workers of the soviet who strive tirelessly making superior weapons such as the Mi-24 Krokodil attack helicopters that the NATO forces have learned to fear.

Despite the best efforts of our military, the situation is severe and dangerous. General Secretary Chernenko gave a moving speech today where he warned the leaders of NATO that the Politburo will not tolerate their acts of aggression that now threaten our sisters and brothers of the socialist states. He sent a clear message that we are ready and willing to meet further acts of aggression with the full power of our arsenals. STAVKA has been given the order to plan the use of 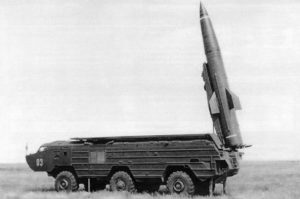 OTR-21 Tochka with tactical nuclear warheads is moving into positions where they can strike at NATO forces.

tactical nuclear weapons if NATO forces do not stop their invasion and withdraw from the German Democratic Republic. Chief of the General Staff Marshal Ogarkov said that the Soviet Army would act responsibly but would not hesitate if it came to this. All they would be doing was to fight in their rightful defense and any civilian casualties would be at the feet of the aggressors.