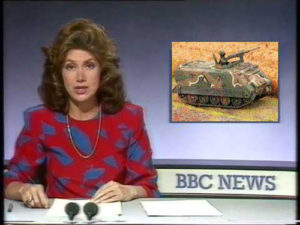 [Small arms fire can be heard in the distance]

The fighting has been non-stop. One day we are advancing and then the next we are being pushed back. Neither side seems to be able to get the upper hand in this conflict. Both sides are suffering heavy losses in both equipment and manpower.

Despite this, the mood around here is one of optimism. I’m informed that it’s only a matter of time before our forces break through the Soviet defences and open the way to Berlin again. The word that the British Army is cutting its way through to us from the north. Their arrival will turn the tide of battle in our favour.

I’ve got one of our American allies here to tell us about the situation.

Captain, what are the prospects?

[Camera switches to an American soldier]

Our troops are making steady progress. As we press on in some of the most intense fighting we have seen so far in the conflict, we know that we are fighting for the free world and our way of life.

[Camera shakes, as an explosion is heard]

Was that artillery? Or another air strike?

[Military voice from off camera]

Artillery strike. Word just came in, civilians are being evacuated to a more secure location. You will need to end this broadcast.

As you can hear, the fighting is getting closer, and we need to get moving. We are still fighting the good fight.

This has been Sally Sparrows, BBC World News.