Captain John “Duke” Chance, commander of RCT 2, walked up to Captain Pat “Bond” Wheeler, commander of RCT 2’s tank element, and informed him the Combat Team had just received orders to move.
“Pat, we’re been redeployed to Hof. The commies have broken through and they want our Leathernecks. Bad news for us though is command what the majority of your tanks here to continue the advance in Leipzig. I’m only taking a tank platoon with me”.
“No worries Duke. Take SGTs Collier’s platoon. Ever since Lt. Parker coped it he has been running 1st Platoon.”
RCT 2 had received orders to move to Hof in Bavaria. The commies were using route 173, Plauener Str, as an axis for their assault and NATO Command needed a blocking force to blunt the attack so Division could set up a defense position. RCT 2 had drawn the straw.
RCT 2 moved out but got separated in the civilian traffic that was trying to escape the soviet onslaught. Captain Chance would have to use what he had and wait for the rest of his command to turn up when they did. He would be moving into position with his 2nd Platoon, SGT Collier’s tanks, his attached air defense and a battery of M109s and their observer. 1st Platoon, his Anti-Tank squads, machine gun platoon and the LAVs were still caught up in the rear. 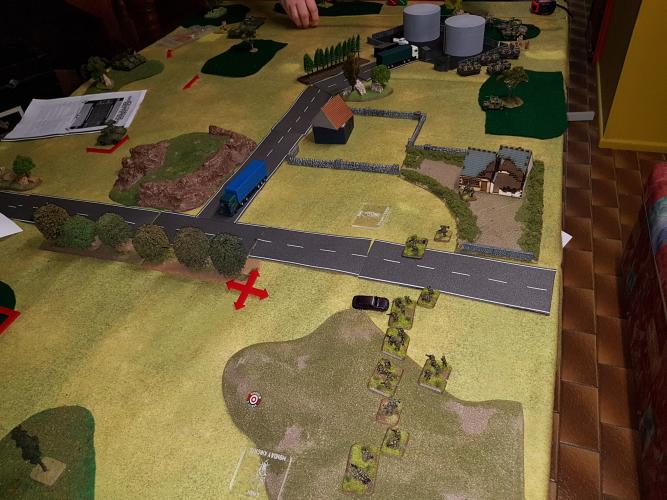 Duke placed his rifle platoon on the hills to the left of the road and the battery in the woods behind the silos on the right of the area of operations (AO). He placed the Anti-Air Platoon with them while the Forward Observer (FO) occupied some woods in the centre of the AO. The tanks were placed in ambush. 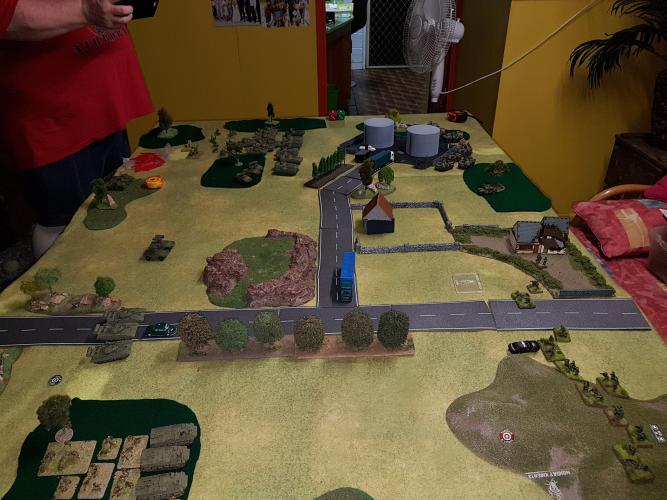 No sooner had RCT 2 occupied their positions that the sounds of tracked vehicles could be heard. Sentries reported tanks and APCs advancing on their position. All areas were stood to. Duke muttered "Here we go again", as he looked to the rear hoping to see the rest of his command.The enemy had sent a platoon of T55s down the road, a BMP 2 force supported by Storms and BRDM2 advanced down the left flank onto the hill while another BMP 2 force supported by T55s, Spandrels advanced down the right flank towards the silos. 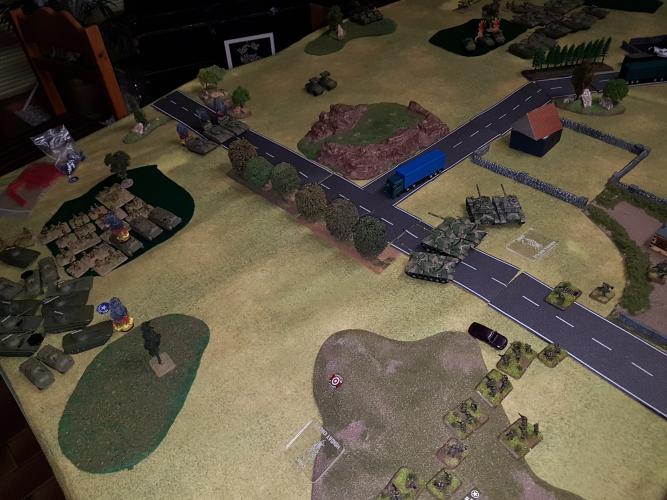 Seeing the threat of the T55s, SGT "War Daddy" Collier sprung his ambush destroying them and two of the Spandrels. 2nd Platoons Dragons engaged and destroyed a Storm and BMP2 while Duke called in artillery on the infantry advancing with them. The VADs on the right flank moved forward and engaged the advancing BMPs, but failed to destroy any vehicles. 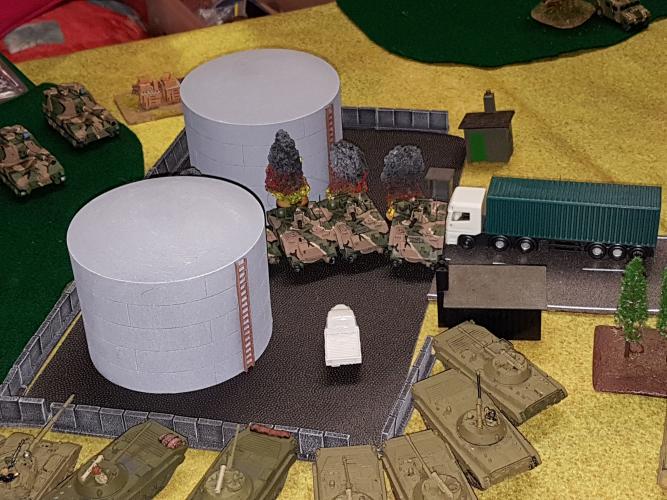 The enemy advanced on the right flank engaging and destroying the VADs. 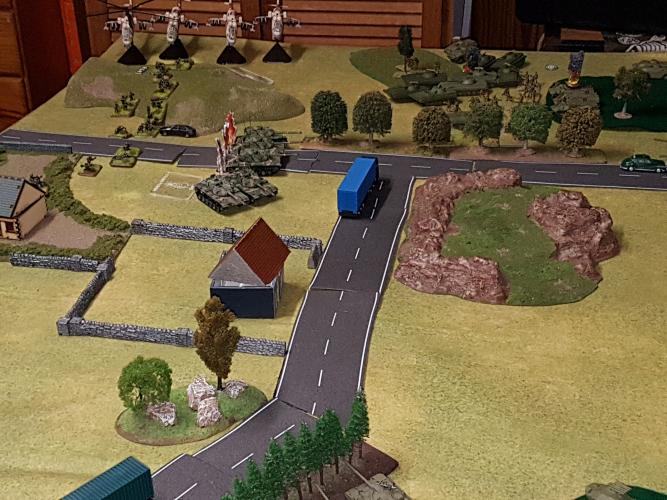 Clearing the way for a flight of four HIND Ds to fly in and engage and destroy 3 of Collier's tanks. The left flank continued to advance using the tree line as cover. They attempted to engage 2nd Platoon on the hill, but the Leathernecks had dug their pits too well. 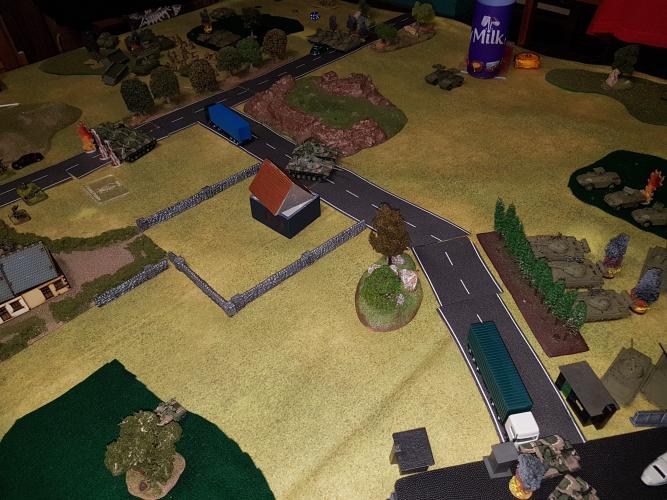 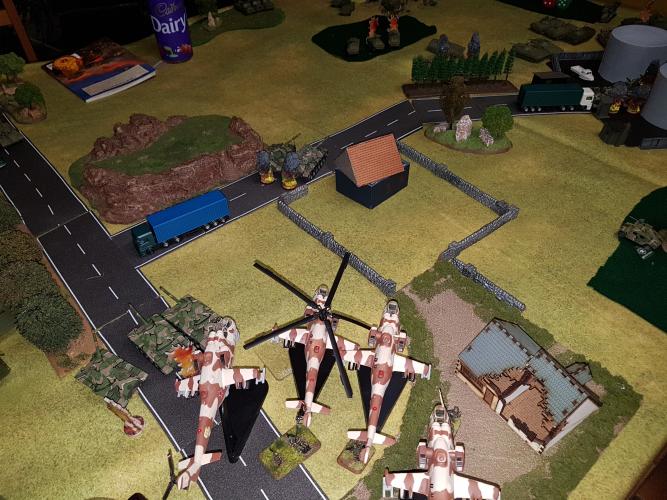 The enemy continued their advance on the right flank trying to swamp the position around the silo. On the left flank the BMPs and supporting infantry continue their advance trying to destroy the Dragons, but 2 Platoon were dug in tight. A flight of HINDs flew over and destroyed the last of "War Daddy" Collier's tanks 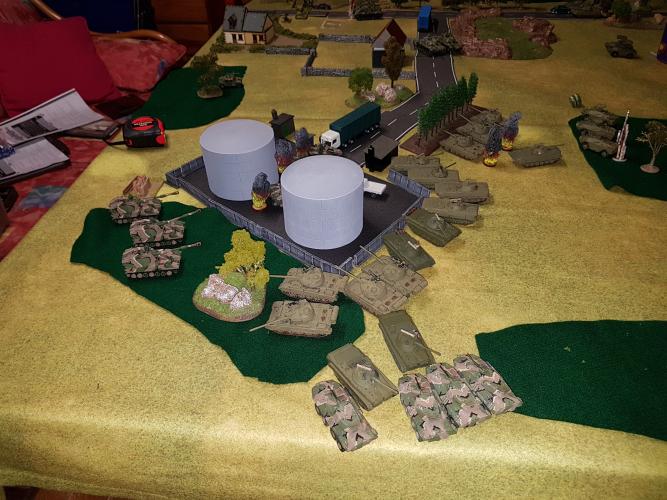 Duke was getting pressed on both flanks, where were the rest of his command. Suddenly over the radio the LAV platoon announced they had arrived. Duke promptly sent them to support the right flank and engage the BMPs that were threatening the M109 battery. The LAVs engaged and hit seven of the nine BMPs there however their 25mm Bushmasters failed to penetrate any of them. 2nd Platoon continued to hold the high ground engaging and destroying four more BMPs, while the platoons machine guns and SAWs tried to bring down the HINDs, but to no avail. Their bullets failed to penetrate the armoured skin f the HINDs. 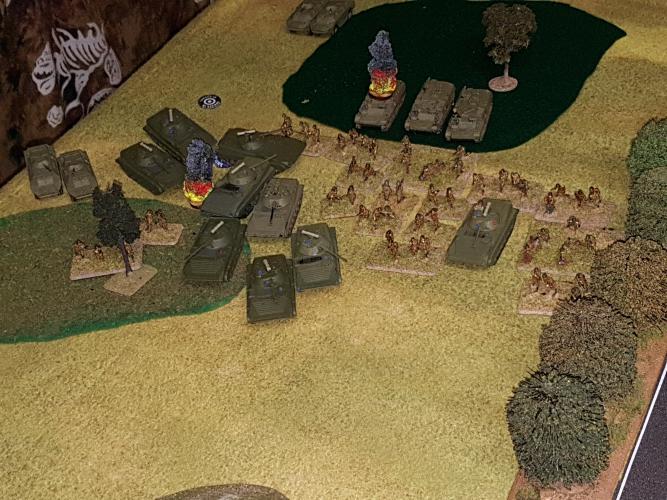 The enemy started pressing both flanks. All the bailed out BMPs managed to get back in their vehicles and promptly engaged the LAVs, destroying one of them. The HINDs engaged 2 Platoon and managed to put a Dragon out of operation. The enemy rifle company were still shaken from being hit and failed to move forward. 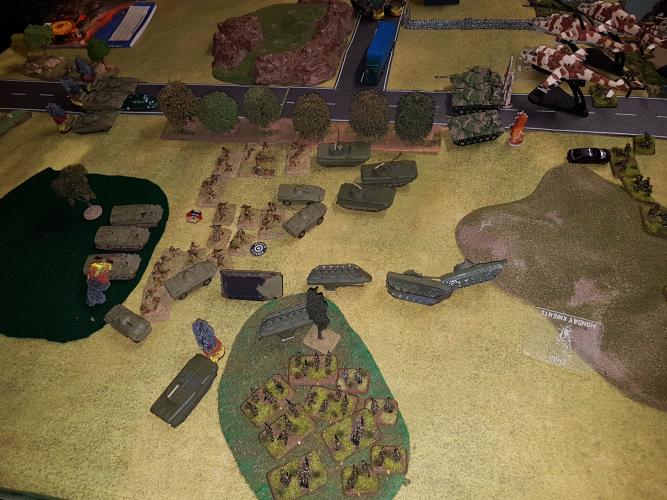 Duke was getting ready to order 2 Platoon to fix bayonets when the radio announced the arrival of the 1st Platoon and one the anti-tank squads. Duke promptly ordered them to support 2 Platoon. The anti-tank squad engaged and destroyed a BMP while 1 Platoon assaulted the one of the enemy infantry units, destroying them. 2 Platoon engaged the HINDs and finally were rewarded with bringing one down. 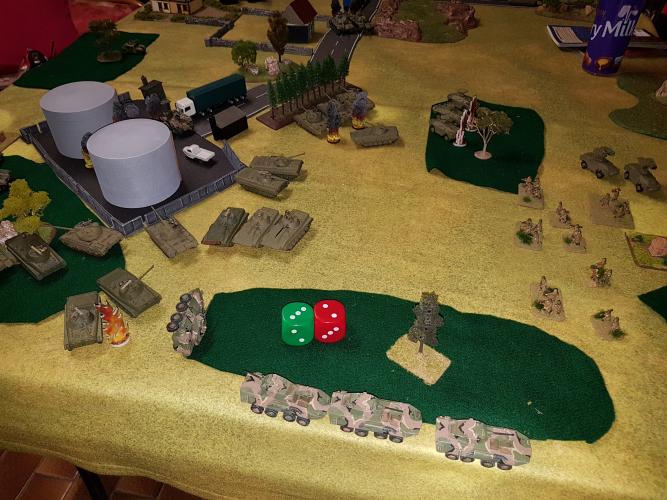 The LAV commander saw that there was an opening to the rear of the enemy and took the opportunity move around and engage the enemy infantry, the last LAV in order of march covered the advance and destroyed a BMP. 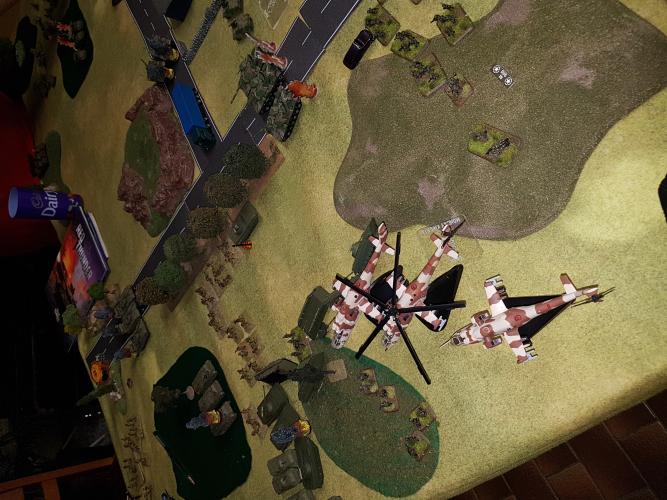 The HINDs seeing 1st Platoon arrive swooped down and unleashed all kinds of hell on them. The air was full of hot lead and spraying body parts. The majority of the SAW and M60 teams were killed. The BMPs on the right flank swooped in on the LAVs like a pack of rabid dogs and this time managed to destroyed the platoon. The T55s continued to move around and engaged and destroyed two of the M109s and forced the surviving M109 to bail.

Finally the last of RCT 2 reported in with the arrival on the 2nd Anti-Tank Squad and Machine-Gun Platoon. However it was too little too late. Duke looked around at his shrinking command and ordered all surviving units to withdraw, giving the field to the enemy.

After Action Review:
There was a lot I got out of the game looking back at it. Very poor choice of units to start the game with. In hindsight I should of started with 2 rifle platoons both securing the flanks. The T55s that advanced down the road were bait that I fell for. The dragons of 2 Platoon could of dealt with them. I also spit a lot of my fire. I should of concentrated on platoons and destroyed them one at a time. In the end all I destroyed was one T55 platoon, but had caused several platoons to make morale checks but they all passed them.