“BULLDOG, this is SAVOY 6 over”
“SAVOY 6, this is BULLDOG send over.”
“BULLDOG, SAVOY 6, you have a estimated Regiment strength force moving your way over”
“SAVOY 6, this is BULLDOG, acknowledged, standing too now over.”
BULLDOG, SAVOY 6, good hunting, OUT.”
Situation:
Topography: The area of operations (AO) is covered by crop fields and is dominated by the town of Zwochau. There are hills on either side and a forested area to the South.
Enemy Forces: There are reports of a Armoured Regiment consisting of two Battalions of tanks and a Battalion of Mech Infantry. Usual supporting elements are expected. There have been no reports of enemy air activity within the AO.
Friendly Forces: Combat Team Alpha, 2nd of the 81st. Attached are Bravo Company, 1st of the 6th Inf. They will be split into two platoons supporting each Armoured Company.
We have direct 155mm artillery support from a Field Battery and a platoon of Cobras from the 1st of the 7th.
MISSION: Combat Team Alpha is to destroy the enemy in vicinity of Zwochau in order for supply routes to Berlin to remain open.

This is a Total War battle where we used the Total Victory mission. The game was set for six turns, where the player holding the most objectives wins. A secondary task was to destroy the most units. 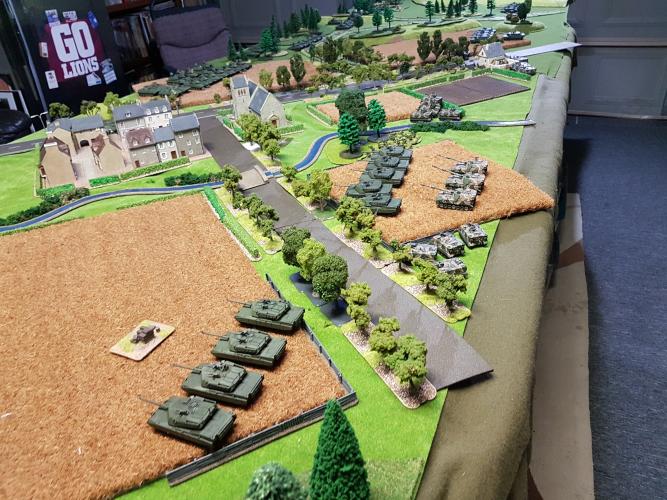 Being the defender I got to set up second so I was lucky to see where the Colonel set his forces. The M1 Company with supporting troops set up in the fields near the village. Their mission was to secure the three objectives in their area and destroy the T72s and BMPs to their front. The VADs I deployed in the centre to target any BMPs that strayed down the road. 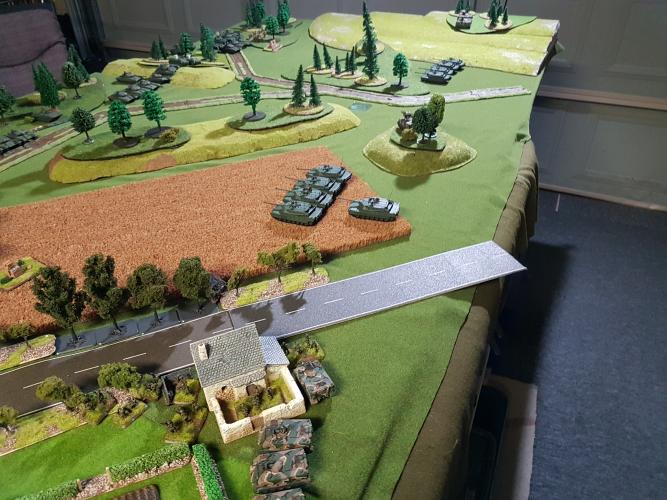 On the right flank I deployed the IPM1s with ITVs in support. Their mission was to engage and destroy the T64 Battalion. Their attached infantry had occupied a farm house and were going to move forward and secure the objective in the field.

The Colonel had been busy the last few days and put together another Battalion of T72s. He was going to proxy these as T64s to see how they went. He had three formations that covered the other side. A company of T72s with BMPs on my left. A company of T72s with two BMP units and ZSU23/4s in the centre. On my right were two companies of T64s and a company T72s supported by dismounted infantry. Each wing also had anti-tank support. The left had three Spandrels and the right a pair of Storms. Another new unit??

Cry Havoc, and let loose the Dogs of War... 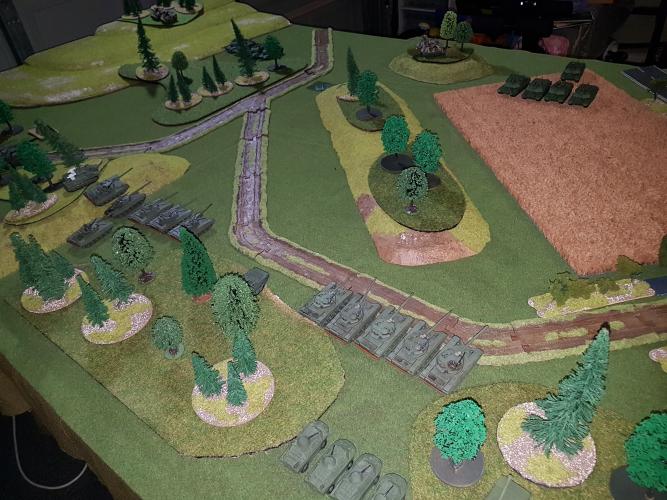 The Colonel surges his forces forward. On the right the T64s and T72s move forward. With the extra speed of the T64s they manage to get in position to engage the IPM1s which are in the field. They manage to miss. The T72s are in range of a ITV section set up on the small hill. They engage and destroy both vehicles. First blood to the Colonel. 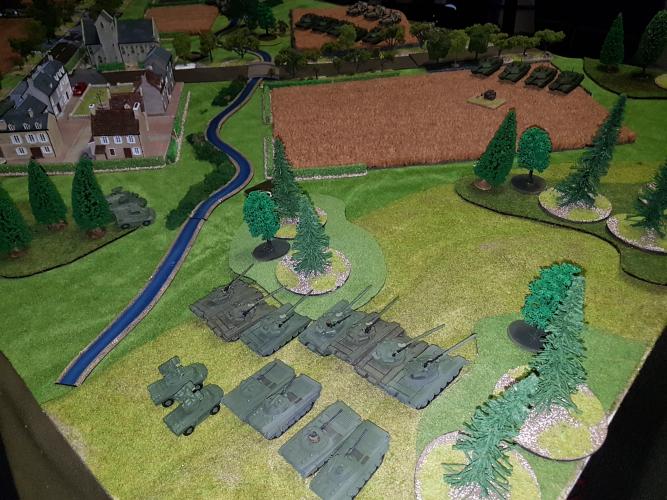 On the left the T72s move forward and engage the M1s in the field and manage to miss them as well. The Spandrel ATGW platoon supported the advance with direct fire, but failed to penetrate any targets. 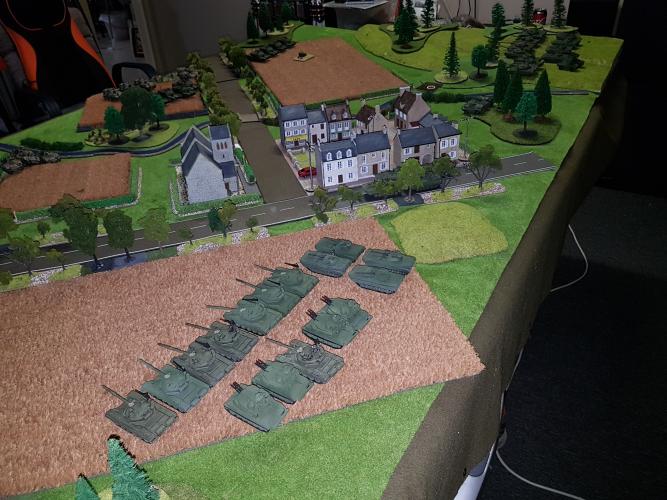 In the centre the T72s and BMPs moved forward. The T72s up to the tree line and the BMPs into the town. As there were no targets in sight there was no shooting. 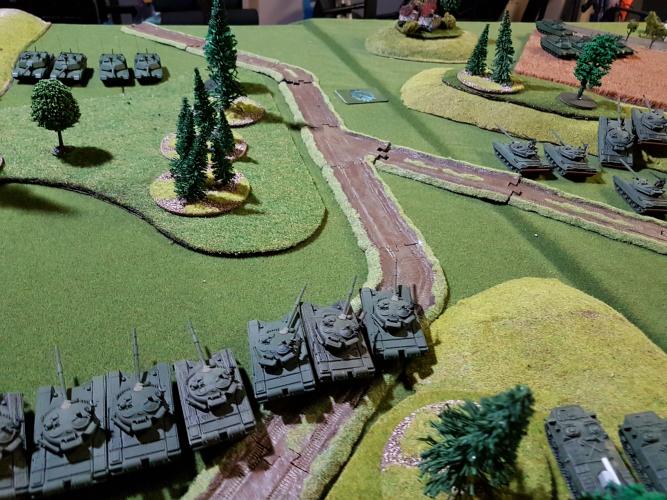 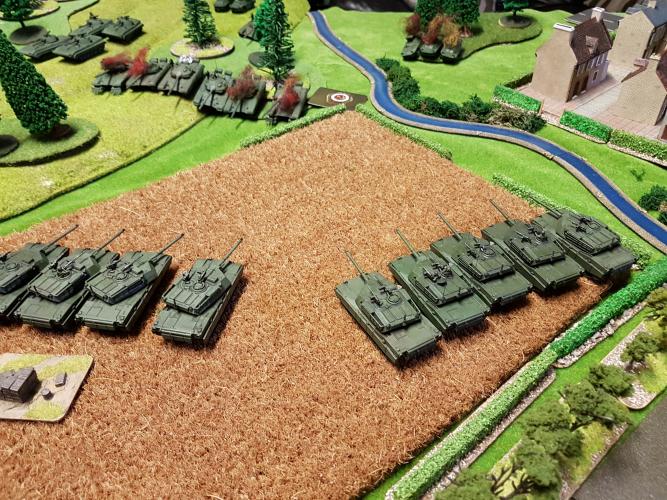 The US response is swift. On the left two M1 platoons advanced (the 2+ cross check came in real handy with one of the platoons having to cross three separate obstacles), and egage and destroy the Anti-Tank platoon and destroy four T72s and bailing another. 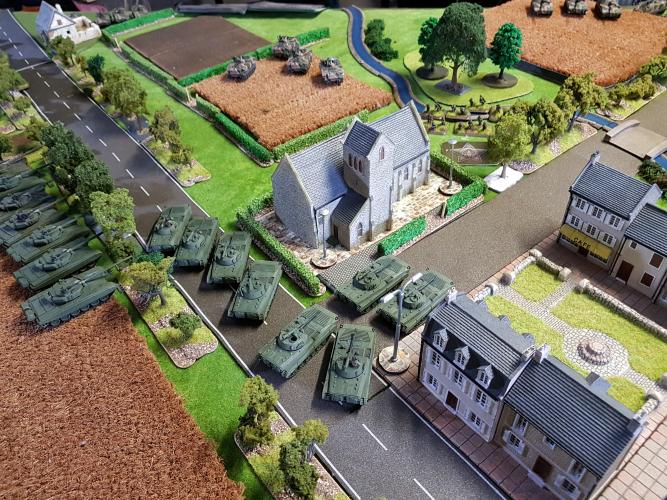 In the centre the infantry move up and secure the objective while the VADs move forward to engage the BMPs but fail to cause any damage with their 5+ FP.. 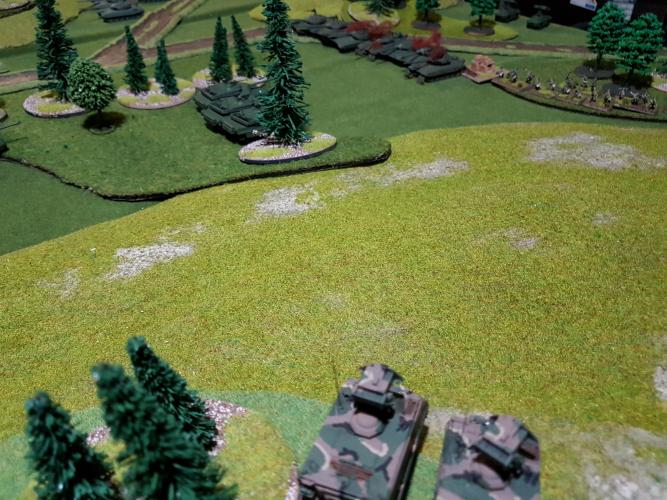 On the right the IPM1s move through the forest and engage the enemy while the ITVs fire in support, destroying four T72s and bailing another. 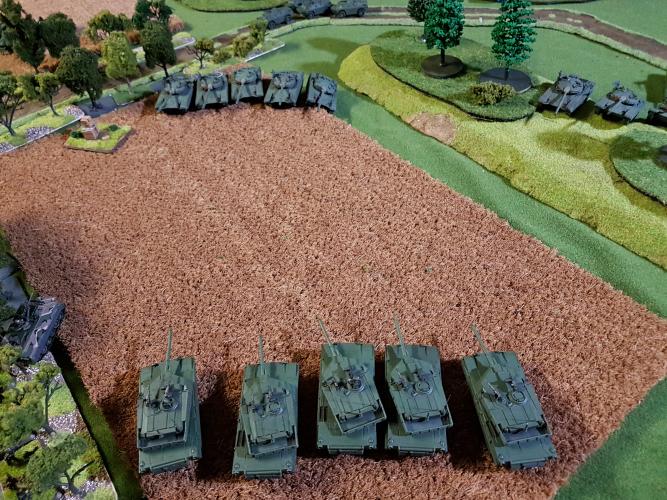 The other IPM1 platoon advanced into the wheat field and engaged the T64s, while the Mech platoon moved forward and occupied the tree line with the FO in his APC. The wheat field played a big part in the game adding that extra +1 cover save. That plus the extra armour of the T64s made it a tough battle.

Over the course of the next few moves the flanks continued to move forward and engage and destroy the enemy. 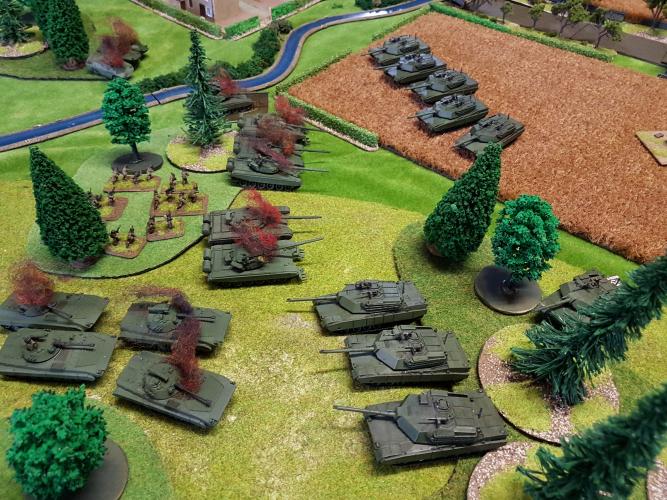 On the left the two platoons of M1s destroy the T72s and BMPs, but not before the infantry dismount. 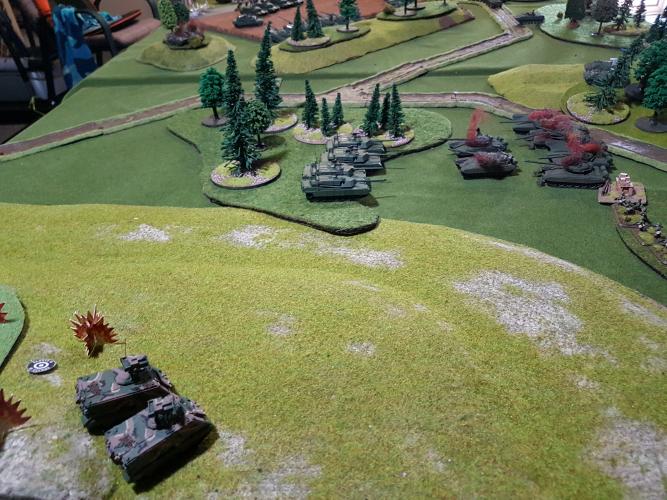 On the right the IPM1s and ITVs finish off the T72s. The Soviet Infantry have dug in though, they are going to be a hard nut to crack. 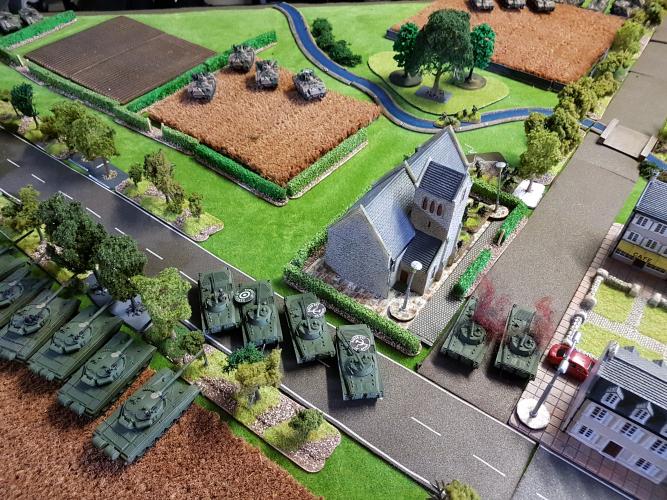 In the centre the infantry infantry destroy a pair of BMPs with their 66 LAWs, while the VADs try to destroy the rest of the BMPs. Plenty of hits, but DAMN YOU 5+ FIRE POWER... 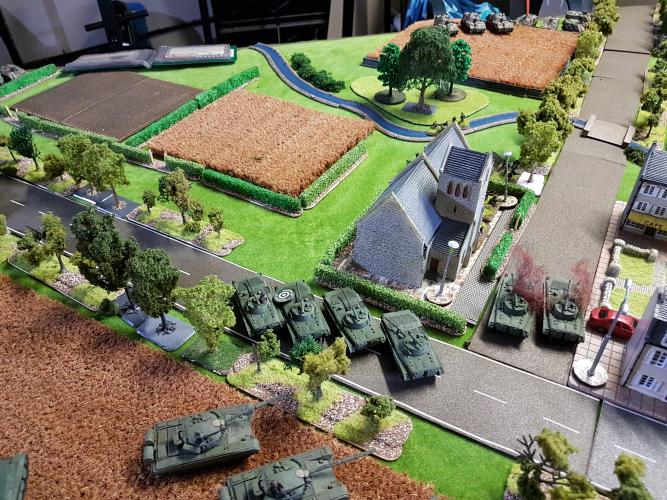 The return fire saw the all the VADs bailed out. They then failed their morale and ran from the field..... 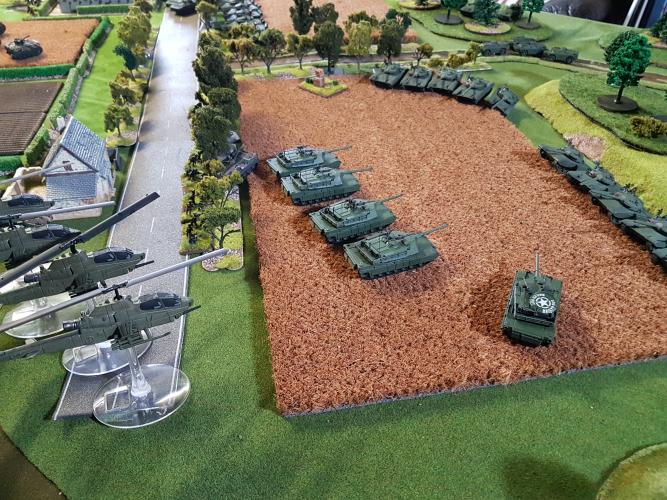 The wheat field is playing a major factor in the engagement between the T64s and IPM1s. Tanks are being hit but are failing to penetrate. The Cobras arrive to add their fire power but to little effect. 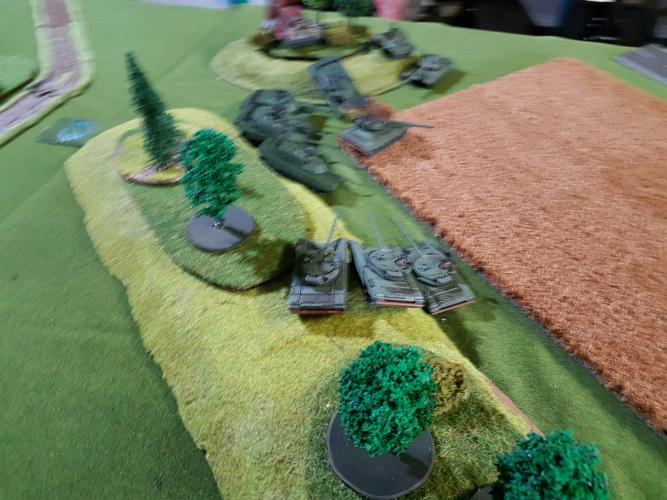 Both sides are using the advanced stabiliser move of 14" to get around behind each other. The AH-1 Cobras only lasted a turn before being gunner down by the combined anti-air umbrella of four ZSU 23/4s and SA-9s.

In the end though. 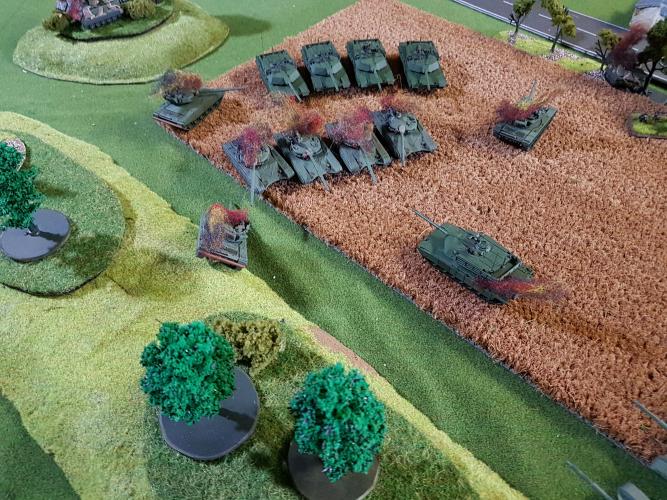 The IPM1s managed to get the upper hand, but not before losing one of their own. 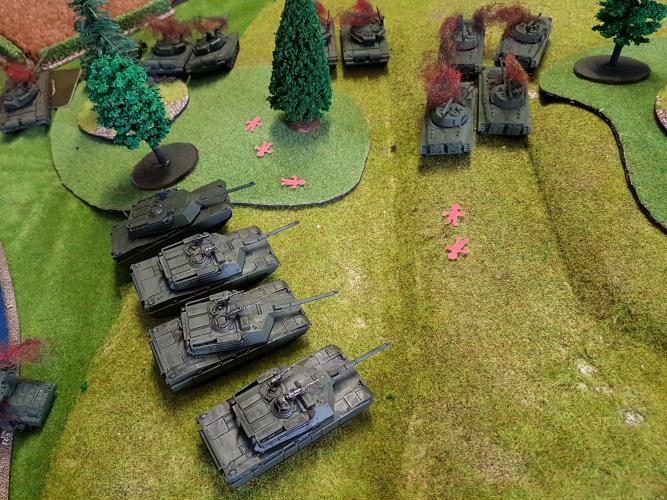 On the left the dismounted infantry try to assault the M1s but get gunned down in defensive fire. 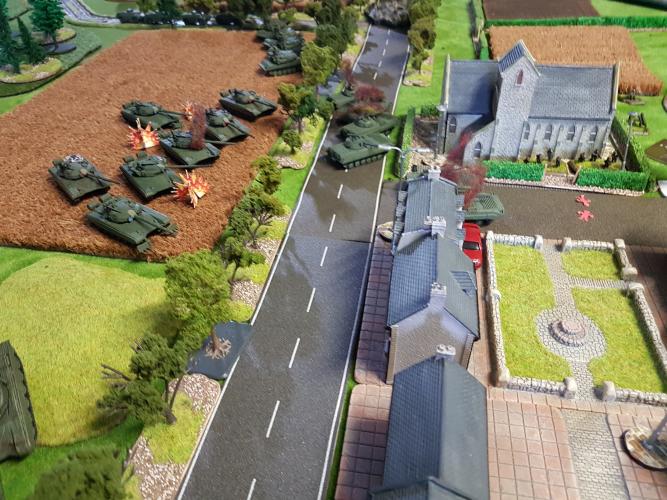 While the infantry platoon destroy the BMPs with Dragons and 66 LAWs. The Platoon commander calls in a artillery strike destroying a tank, but they loose two of their SAW teams to direct fire by the BMPs that manage to survive. 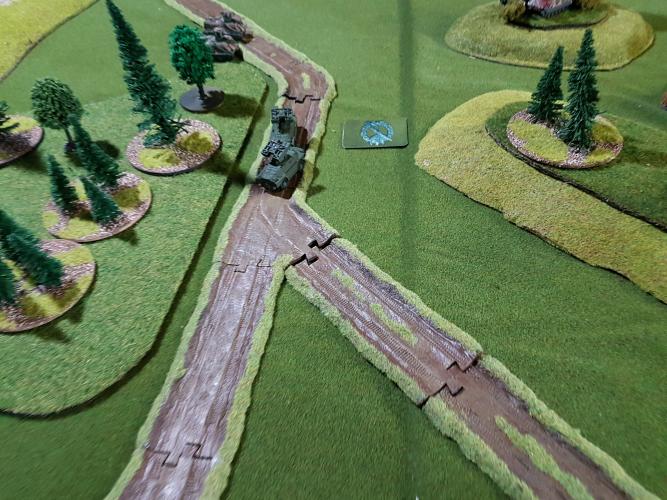 On the right a cheeky pair of SA-9s dash forward to grab an objective...... 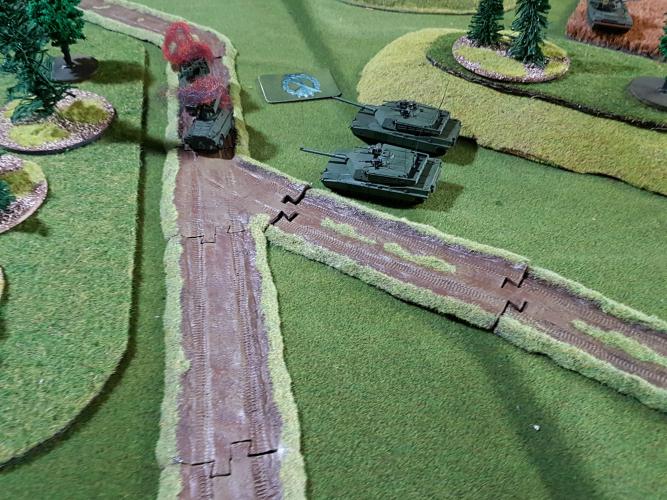 but not before a pair of IPM1s swing around and deal with them. 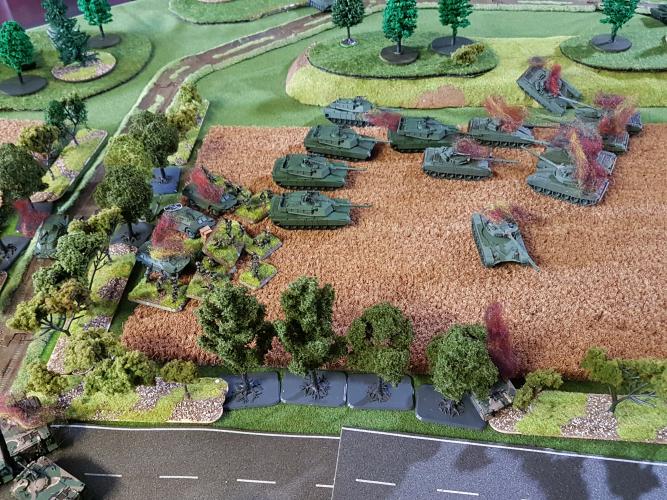 In the wheat field the IPM1s finally put the last T64 to rest; however the BRDM2s try and steal the objective right from under the noses of the IPM1s, so the infantry platoon that have been hiding in the trees assault forward and destroy them. 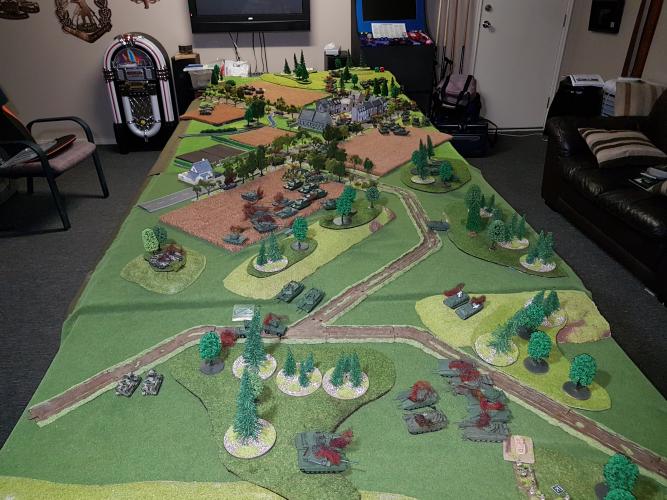 In the end the US hold five of the six objectives. They have destroyed ten enemy units for a loss of three of their own. The M163 VAD Platoon, a M901 ITV section and the AH-1 Cobra Platoon. 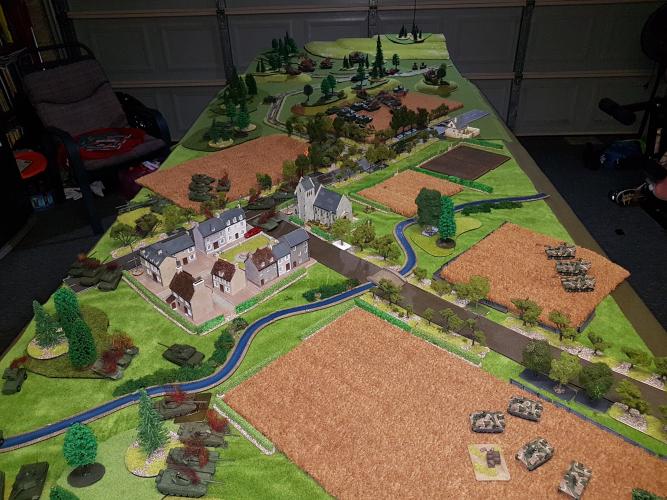 In the After Action Review conducted with the Colonel some really good points were brought up. We both agreed the T64s are a beast to beat but so are the IPM1s. His centre T72 company really did nothing for the game. They could of pushed forward and engaged their right flank to support the wing in their assault. I liked his force but felt some Mi-24s would of been nice. I'm glad he didn't use them. As for me I like the force I'm using, but I'm thinking the Marines need to get back into the scrap.