Brett finally agreed to have a game of Team Yankee with me. He is a long time FoW player having started with Version 1soooooo many years ago. He borrowed some of my sons soviets for the game. He went for a T72 tank Battalion of one formation. I went for a single M1 tank company of two M1 Platoons, a ITV section, a full Mech Platoon, VADs and a M109 Battery of 3 guns. 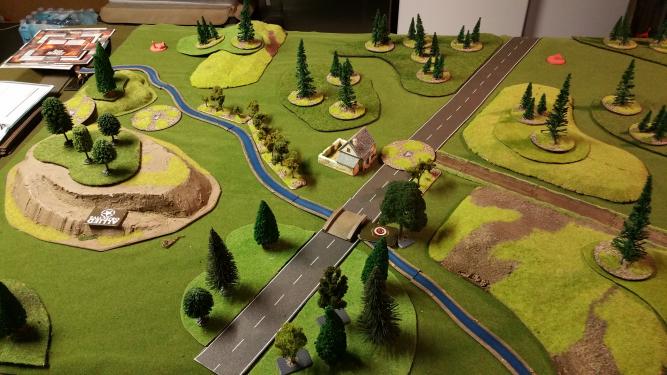 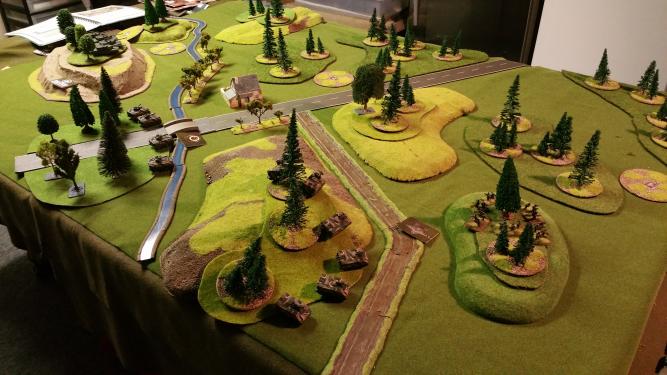 I set my forces up along the hills with my 1st Platoon securing the left flank, Anti-Air defending the bridge and a ITV with APCs on a ridge line. The Mech Platoon was forward in a forest as a Standing Patrol. I kept my 2nd M1 Platoon in ambush. I spread my mine fields out in areas that would hinder any approaches to my defensive line. 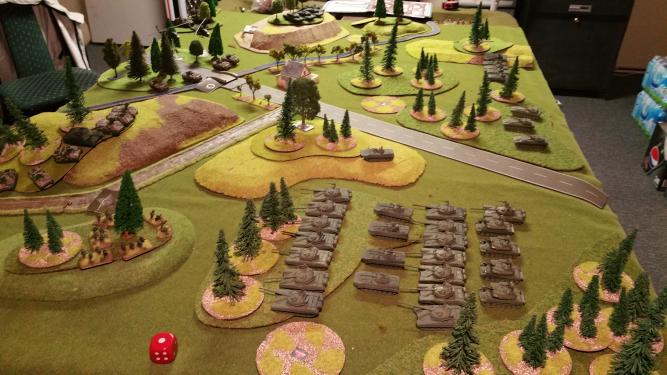 Brett went for a massive wave of tanks. He used his BMP scouts to do a spear head and get a bit closer.

Cry Havoc, and let loose the Dogs of War... 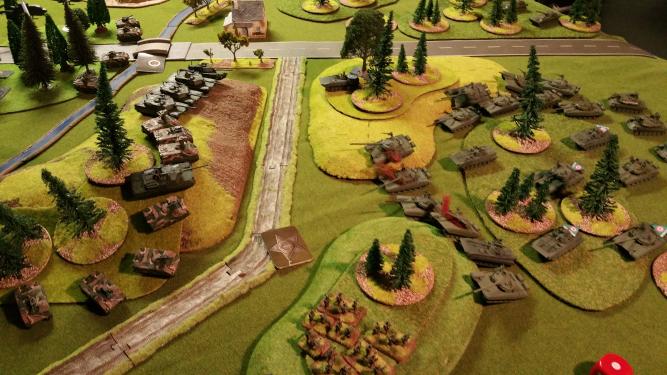 Brett surges his forces forward across the board in a classic mass attack firing as he went. The cover save from being in the forest and being gone to ground pays off and he hits nothing. In my turn I spring my ambush of M1s on the ridge line and draw first blood. I also bring on my Cobras and have them with the VADs protecting the bridge. 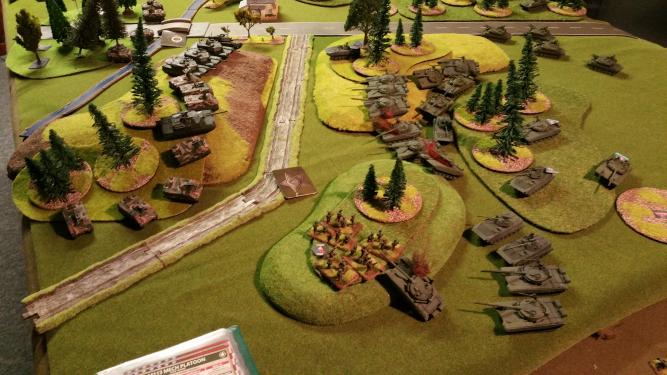 Brett keeps trying to push the right flank with his main force which is turning into a car park, or tank graveyard. He has managed to for two M1s to bail but the US troops are holding strong. 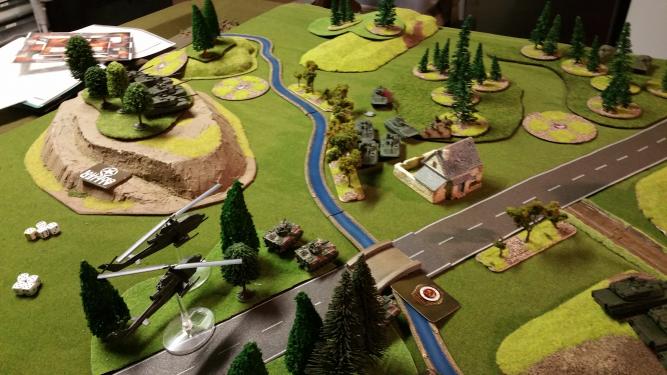 On the left flank Brett brings his BMP2 around but the Cobras spot them and destroy one. 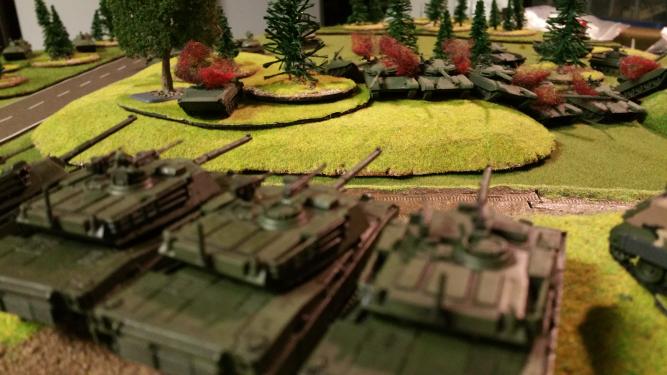 Brett continues to try and force the right flank, but the M1s refuse to budge, destroying T72s as they keep rolling over the hills. 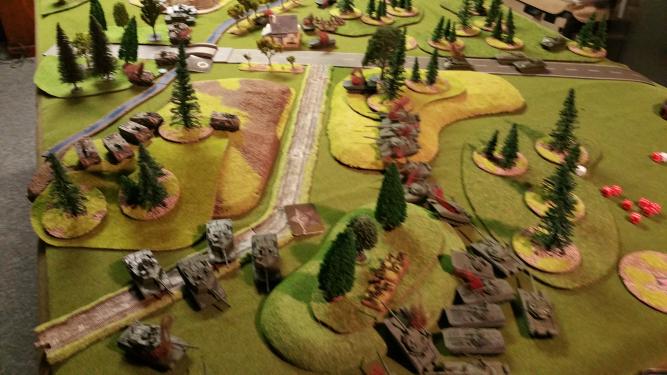 Brett tries to push around the hill but the 14" move plus 2+ cross check of the M1s comes in handy and the treat is dealt with; however one M1 paid the price, as did a few VADs, but not before they dealt with the BMP2 threat. 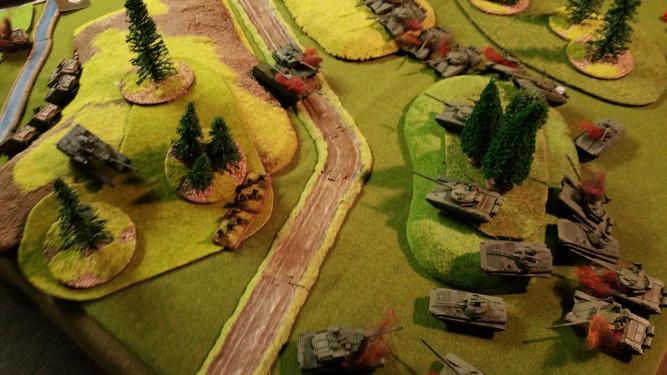 The US forces start their withdrawal leaving the field of battle but the Soviets aren't done. They manage to destroy two M1s as they pull back. 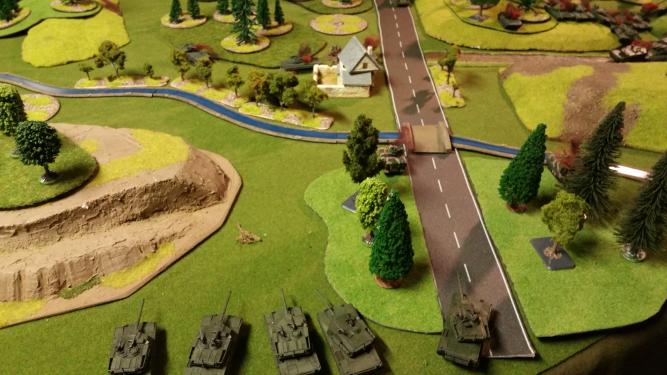 With that the US forces pull their last unit back after fighting a successful fighting withdraw. They lost a three M1s and two VADs but no platoons were broken.

Brett really enjoyed the game even though he lost. We both sat down after and talked about how the battle went and what we would of done different if we did it again. This is the part I enjoy the most of a game is the post action review and find I learn the most. Brett wants to have another crack but with a different force. He is thinking he like the East Germans and their T55s.