Reuters reports that an armoured company of the USMC, under the command of Captain Goodwin has blunted the advance of a battalion of East German tanks at a village on the outskirts of Berlin. 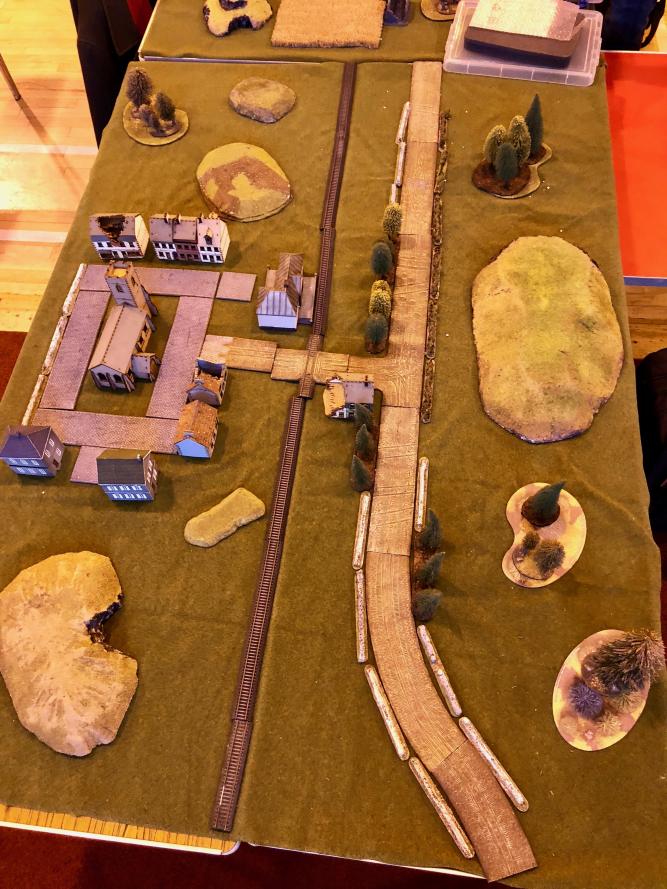 Capt. Goodwin, his unit too far to the front to be withdrawn for re-deployment to Hamburg with the rest of the 2nd Division USMC, were ordered to approach Berlin on the Southernmost axis of the US advance. Intelligence accurately reported on the movements of a battalion of T-55s with supporting artillery and motorised infantry of the East German Volksarmee were attempting to cut off and encircle leading US forces. Goodwin had sappers mine the main approaches to a village, under cover of his LAVs, allowing his M60 Patton tanks to deploy in strength in the surrounding countryside, whilst his infantry held the line and his artillery deployed in secure positions behind a hill on the western outskirts of the village. 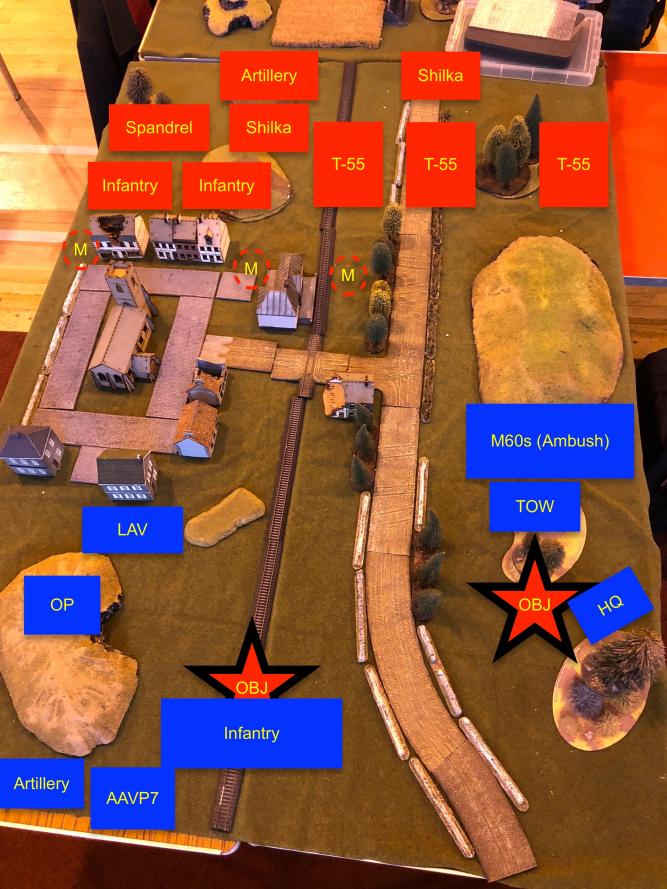 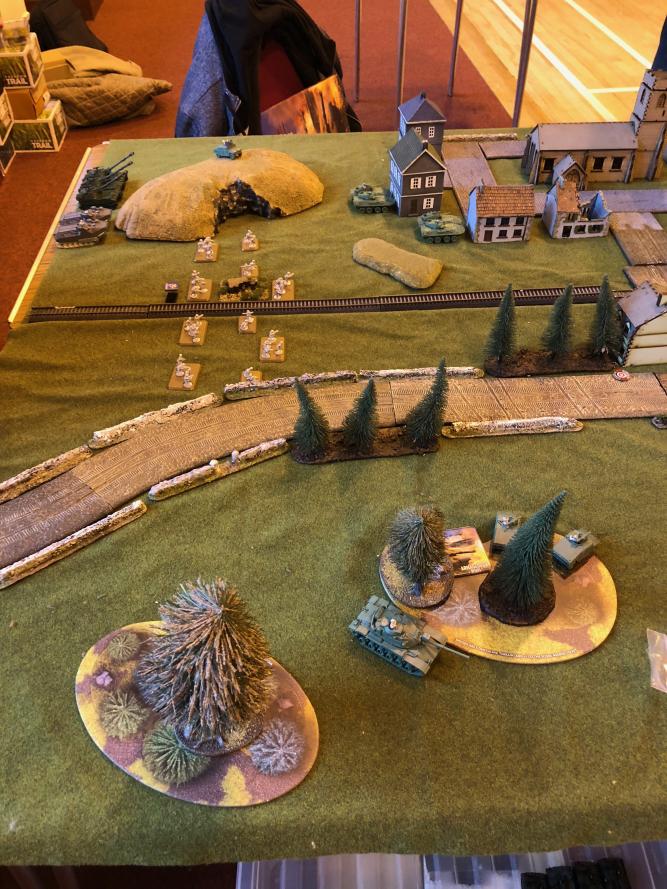 One of the kompanies of East German infantry dismounted from their transports in a hurry, blitzing towards the northern minefield, which they swiftly cleared. Their comrades in the second platoon were less brave, and opted to remain in their vehicles. Their supporting Shilkas and Spandrels followed, taking cover behind a row of houses.

The T-55 kompanies, following standard soviet doctrine, sought to bypass any potential resistance in the village, instead moving in force along the train tracks, central road, and skirting the southern hill, with the Battalion Commander and supporting Shilkas bringing up the rear. Unfortunately for the kompanie advancing along the train tracks, they didn’t realise until it was too late that more minefields lay in their path, losing several of their number as they advanced. The other two kompanies also encountered stern resistance, in the form of a Platoon of M60s concealed by the Southern hill! 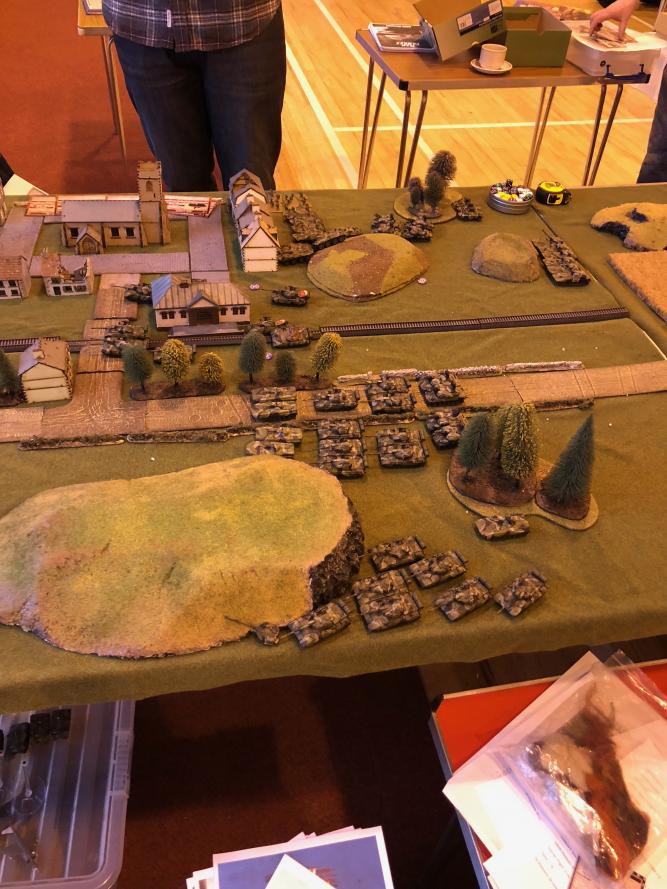 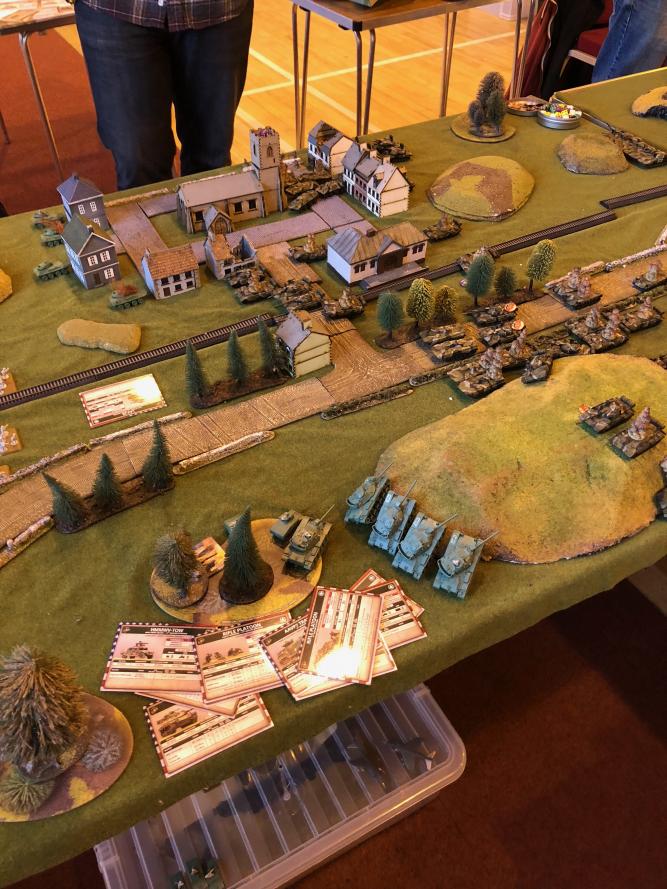 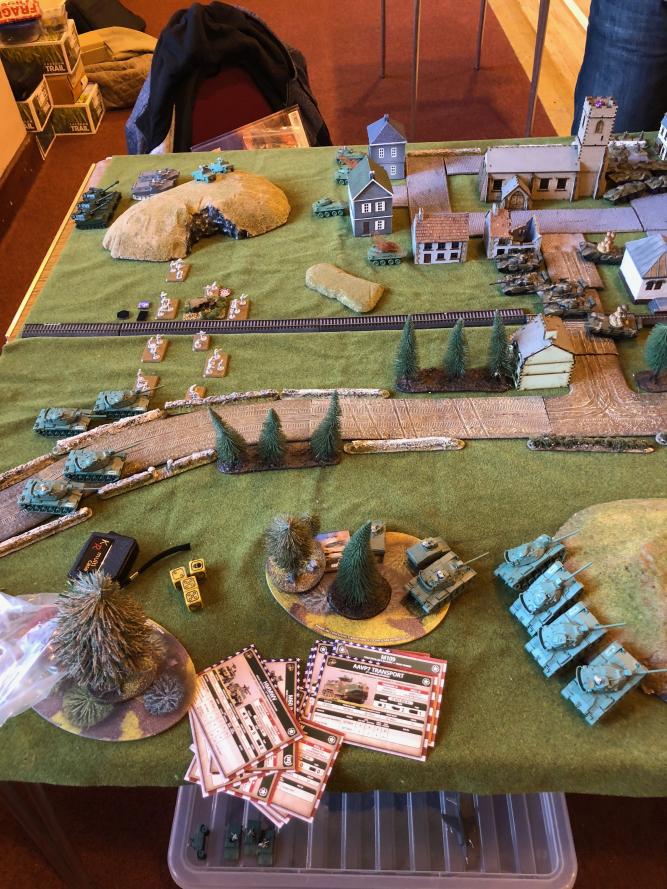 In spite of losses, the East Germans, clearly indoctrinated by soviet propaganda, continued to press forward, but their numbers were no match for the skilled gunners of the Marine Corps. A second platoon of M60s arrived via the central road, and swiftly proceeded to zero in on the advancing T-55s, turning them to burning heaps of scrap metal.

The enemy infantry meanwhile advanced through the village, clearing buildings as they went, and shooting at the Marine LAVs. Our boys were unfazed however, and held the line in spite of losses. They were supported by a unit of Humvee Scouts arriving from reserves. 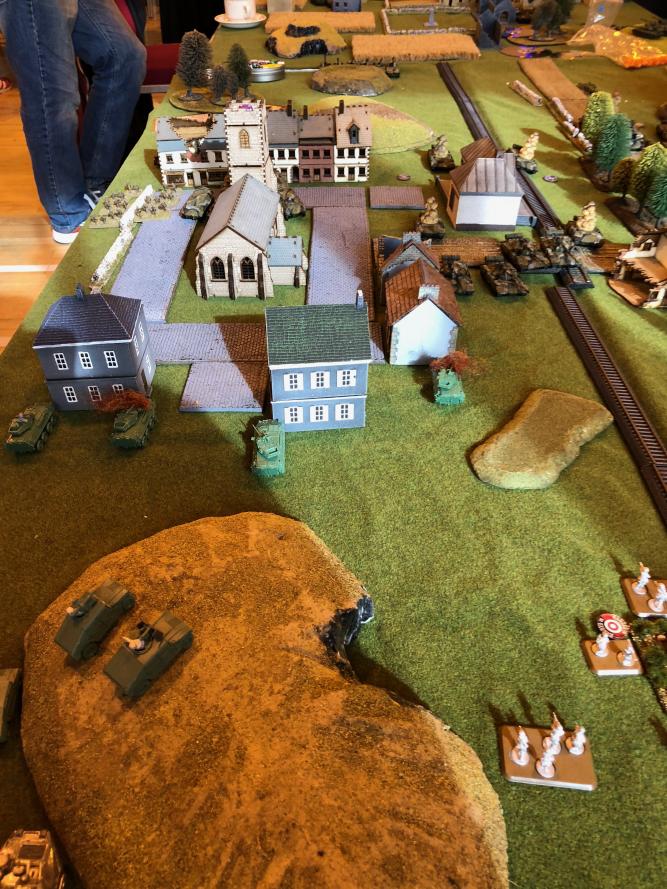 In the centre meanwhile, the T-55s who survived the mines bore down upon the platoon of riflemen defending the objective. With M60s alongside, our boys knew they had the support to repel any assault the Germans could throw at them. 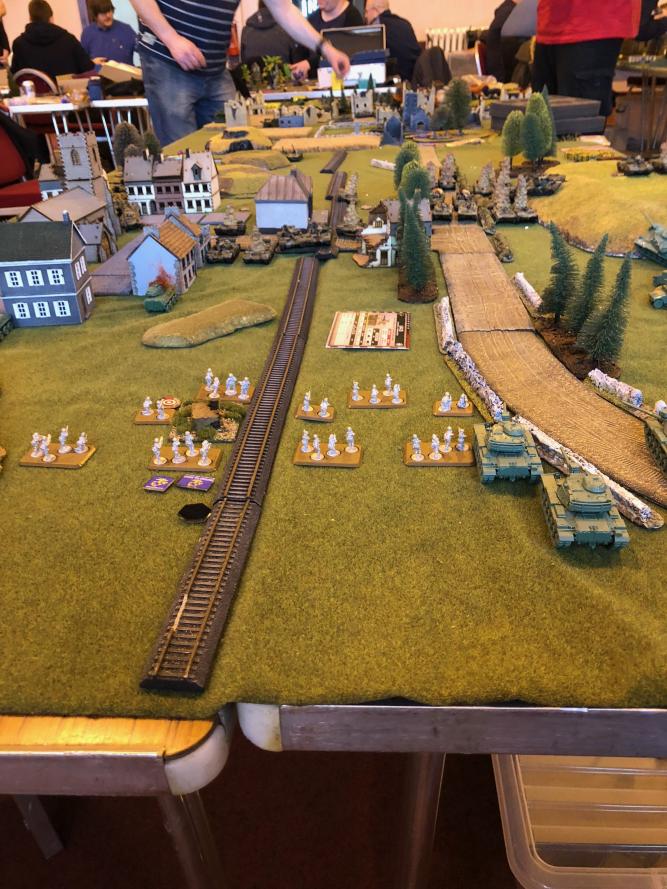 Bearing Down on Our Positions

As the battle continued, the tankers of the USMC taught the Commie-loving East Germans the error of their ways, with accurate shots transforming more T-55s into slag. Despite numerous casualties, there seemed to be no end to the horde of enemy armour pouring down the road. No end, that is, until air support appeared in the form of gallant pilots from a Harrier Squadron on standby! 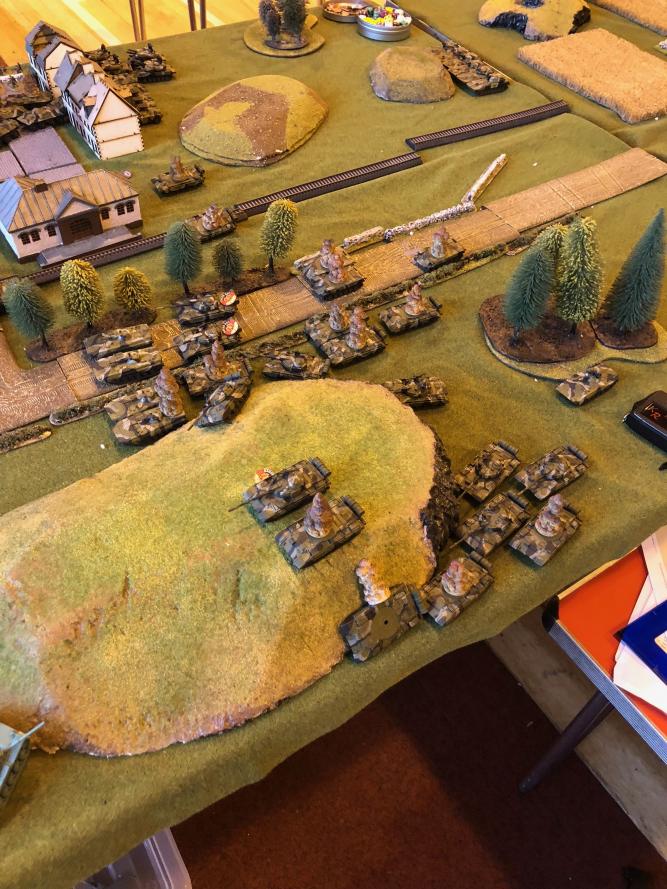 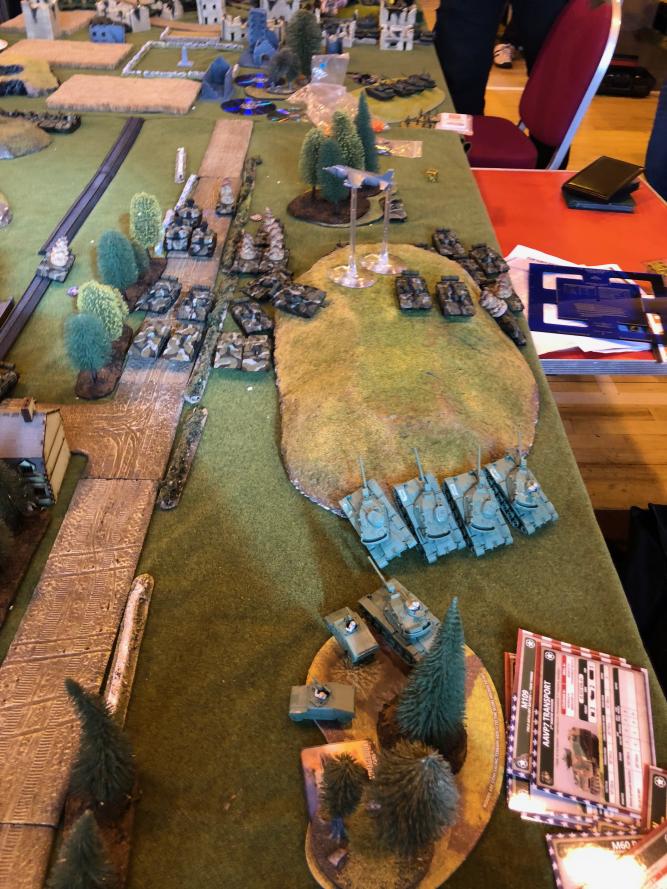 Alas, one of the pilots was seen ejecting from his plane as it went down in flames following a burst of shells from Shilka AA vehicles, and his wingman thought better of making a further sortie, returning to base to re-arm and re-fuel, but the sight of angels on their shoulders encouraged the Marines on the ground to even greater acts of heroism. 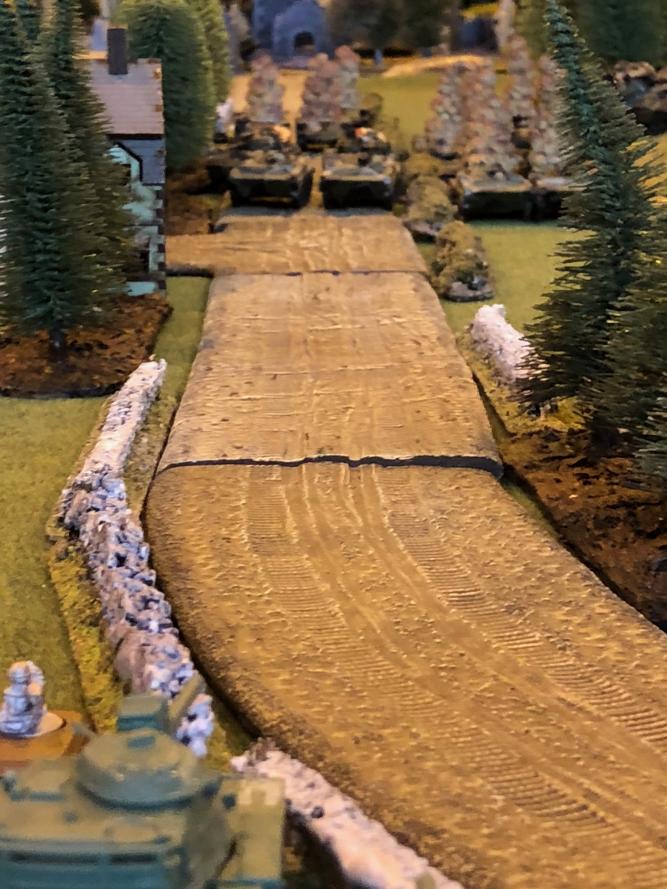 By now, the tide had well and truly turned. Despite coming within spitting distance of both objectives, grinding their own, numerous dead under their tracks, the advance of the East Germans was blunted. 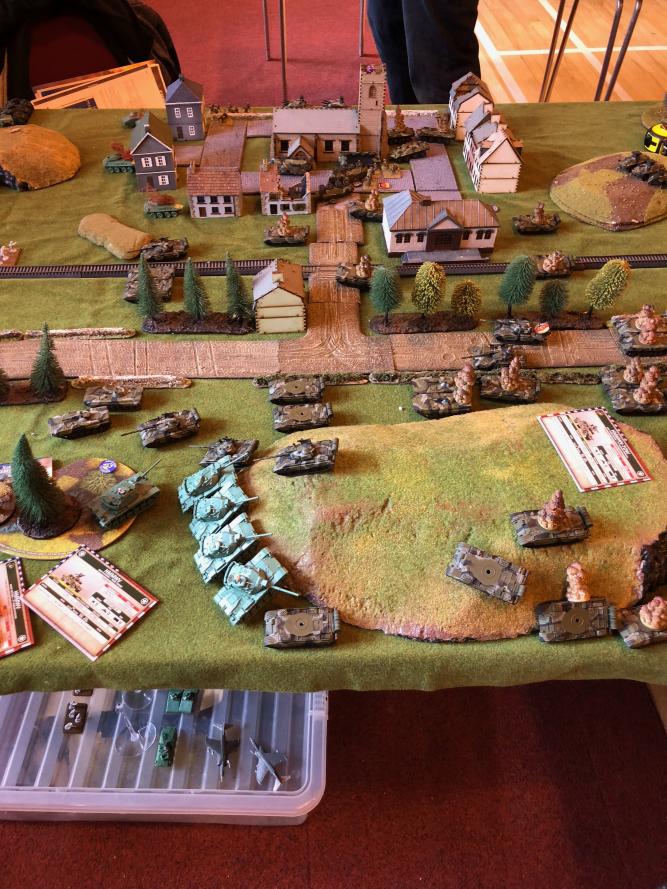 As Far As They Got 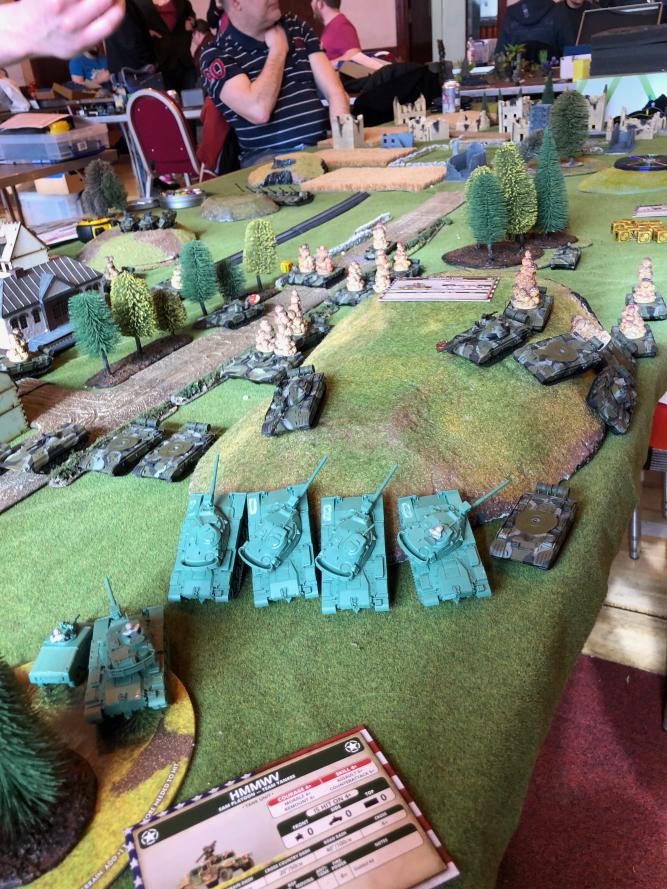 And Not One Step Further

Having put an end to the armoured advance, the M60s then turned their guns on the infantry advancing through the village, swiftly putting an end to their ambitions. 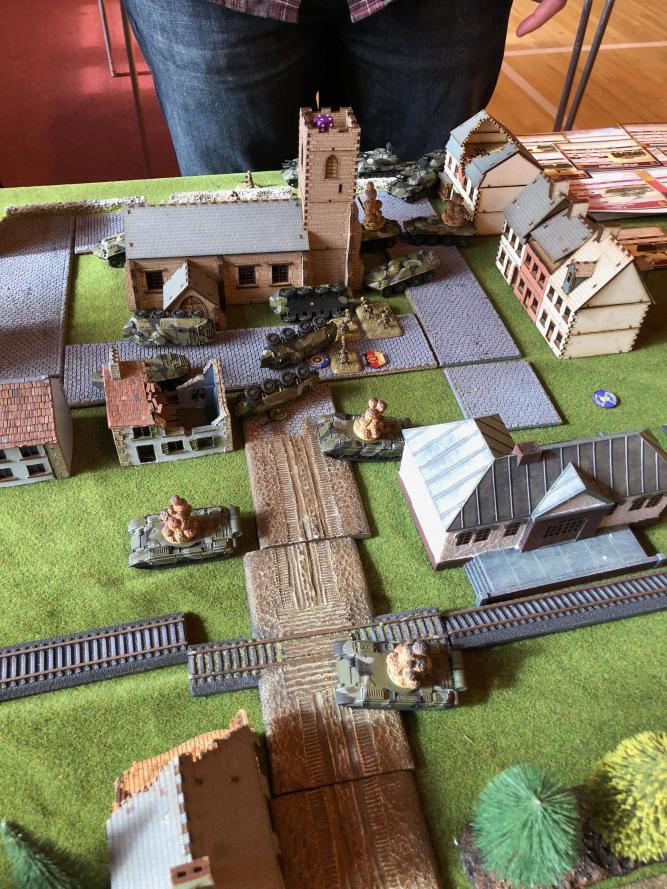 As the smoke cleared on the battlefield, it was clear that the horizon was filled with the ruins of East German vehicles and stacks of bodies. The USMC had held the southern approach to Berlin, freeing up the main thrust of the US forces to continue their advance on the city. 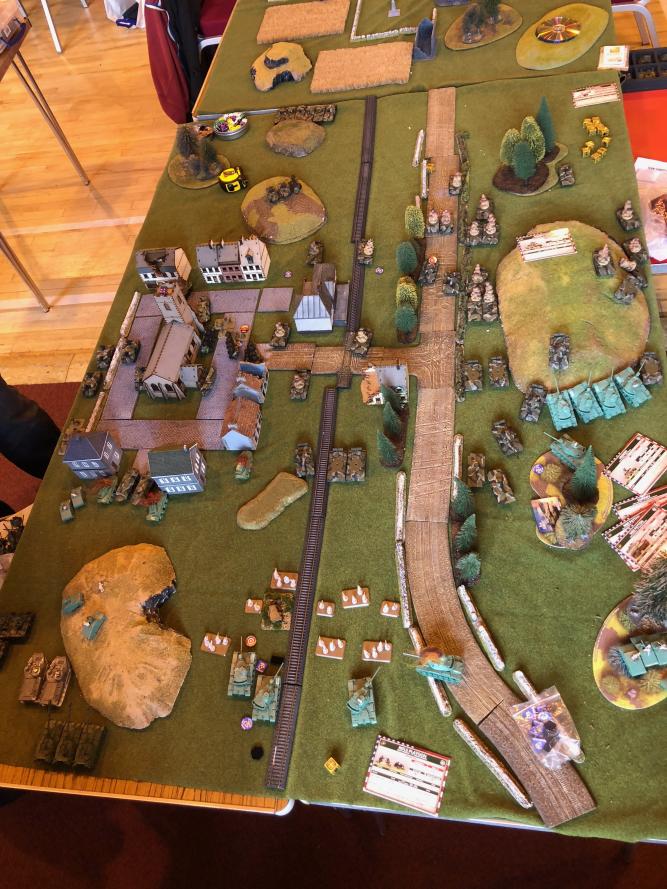 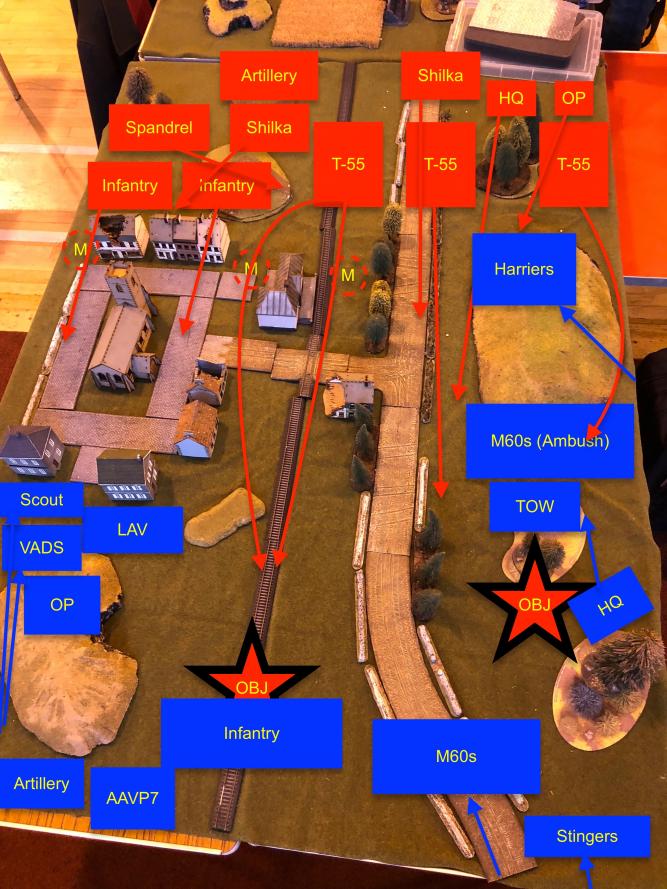