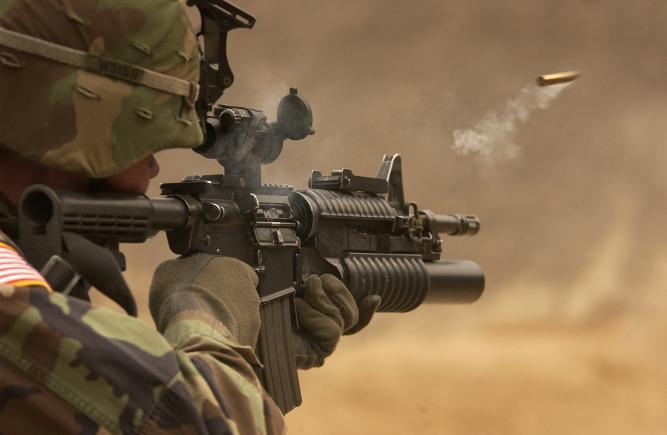 Reuters reports that a United States Marine Corps Armoured Company, under the command of Captain Goodwin, came under heavy assault by a battalion of East German Panzers. Thanks to advance notice from reconnaissance elements, the USMC were able to fortify their positions with hedgehogs and mine fields before the Reds arrived. US Command ordered Goodwin to hold his position, with a view to effecting an orderly withdrawal of NATO forces in the path of the advance, to allow for a counterattack in due course. 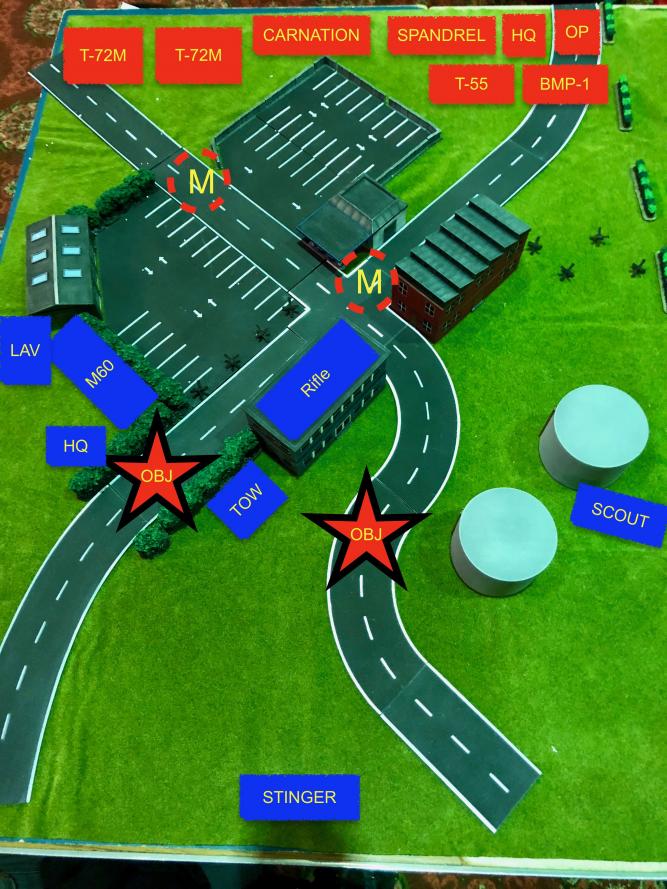 Our brave boys from the Corps deployed in force with 7 M60s (3 held in Ambush), 4 LAVs, a Rifle Platoon, a Humvee Scout Section, a Humvee TOW Section, and a Humvee Stinger Platoon providing AA cover. They were also assisted by a squadron of 2 Harriers providing close air support shortly after the fighting commenced.

With the minefields blocking both roads to the strategic crossroad at the centre of the Industrial Park, the East Germans split their forces into heavy and light elements. The T-55s and BMPs advanced on the southern flank, with the Battalion commander following behind in his T-72, whilst the other T-72Ms initially focused their attention on the Northern flank. The EG artillery, together with the Spandrels, formed an anchor in the centre of their lines. The German objectives were situated on the two west-bound roads past the crossroads.

The US forces deployed in a manner designed to create overlapping fields of fire over the bottlenecks created by the placement of the minefields. The rifle Platoon took up overwatch positions in the office block to the west of the crossroads, with their SMAW placed in prime position to fire down the approach roads and their amphibious transports parked to the south west, should they need to make a hasty retreat. A platoon of M60s took cover in the opposite hedge row, under direction of Captain Goodwin. They were supported by the LAVs who covered their extreme northern flank. The Humvee TOW section deployed in support of the rifle Platoon, whilst the Humvee scout section took up a position among the gas storage facilities on the southern flank, and the second M60 platoon prepared an ambush. The Humvee stinger section, have received intel that opfor air assets were occupied elsewhere, deployed in a rear-guard position, to support the ordered withdrawal. Finally, a flight of Harriers were scrambled from a makeshift airfield several miles to the west behind NATO lines. When the battle was joined, they were still quite a few minutes away from the front. 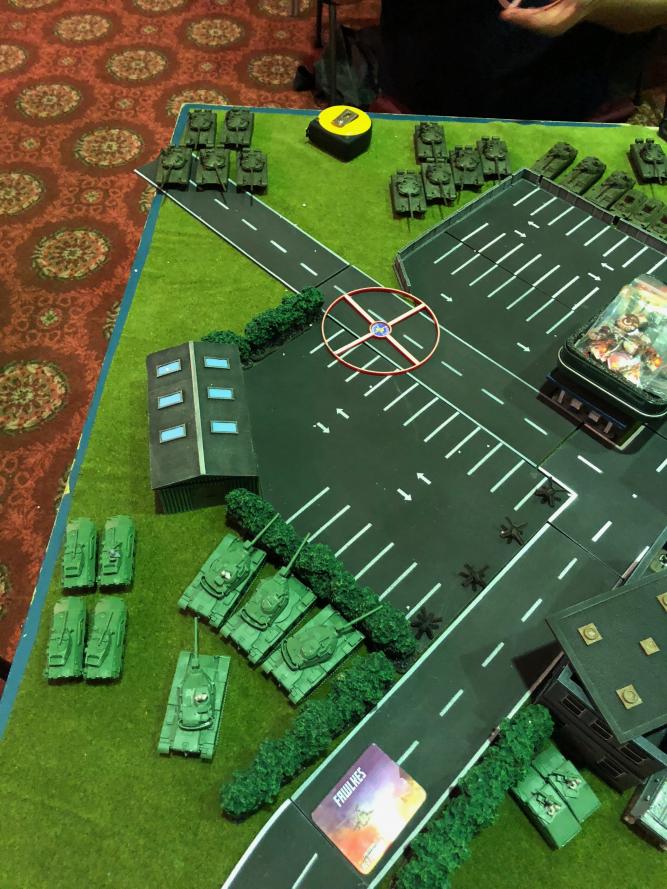 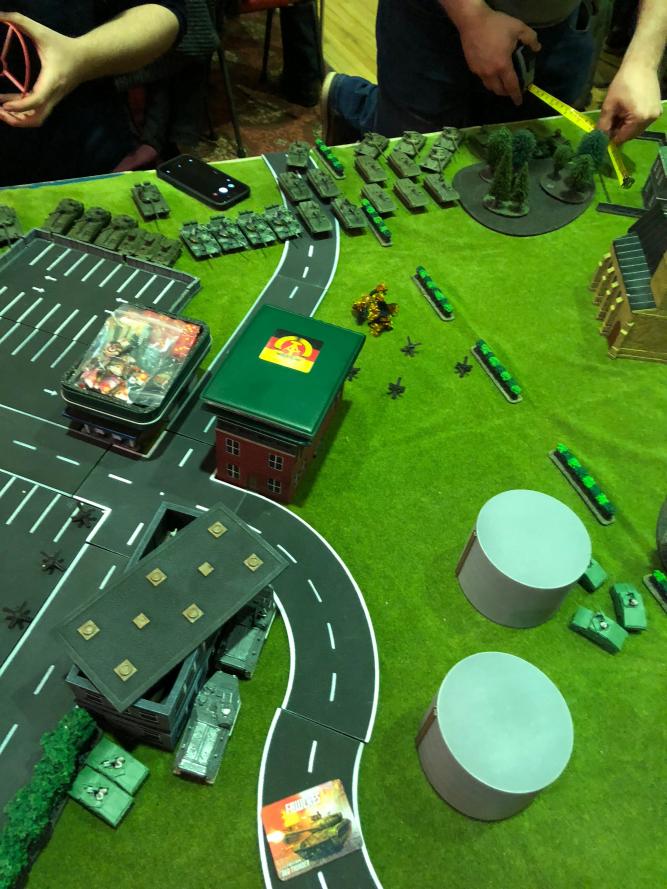 The T-72Ms rapidly advanced, with one Kompanie advancing on the extreme northern flank, using the cover of a mechanics garage and a hedgerow. The other Kompanie took up a firing position at the concrete wall surrounding the gas station parking lot. On the southern flank, BMPs advanced rapidly to a line of hedgehogs, whilst the T-55 Kompanie stalled on the edge of a minefield. 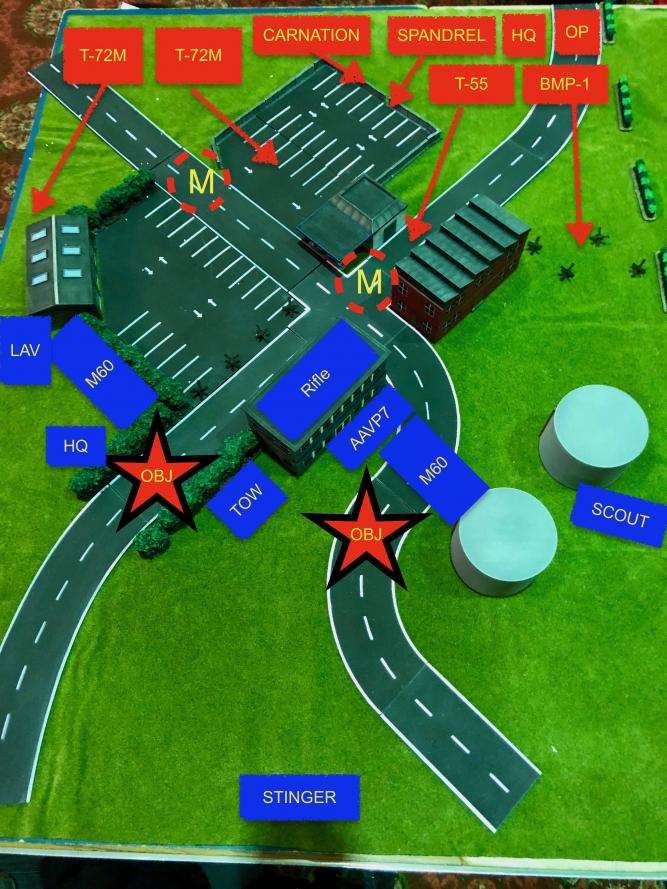 Following their advance, the Reds opened fire with everything they had, dropping artillery in support of the northern advance. Despite heavy shelling, the M60 platoon in the hedgerow managed to batten down the hatches, only to lose a tank to the anti-tank missiles of the Spandrels and see one other bailed out. The LAV Platoon were worse off, with 2 vehicles destroyed and one bailed out by a combination of artillery shells and rounds from an opportunistic T-72. Thankfully, our brave Marines were unfazed by the heavy bombardment and stuck around to continue the fight. 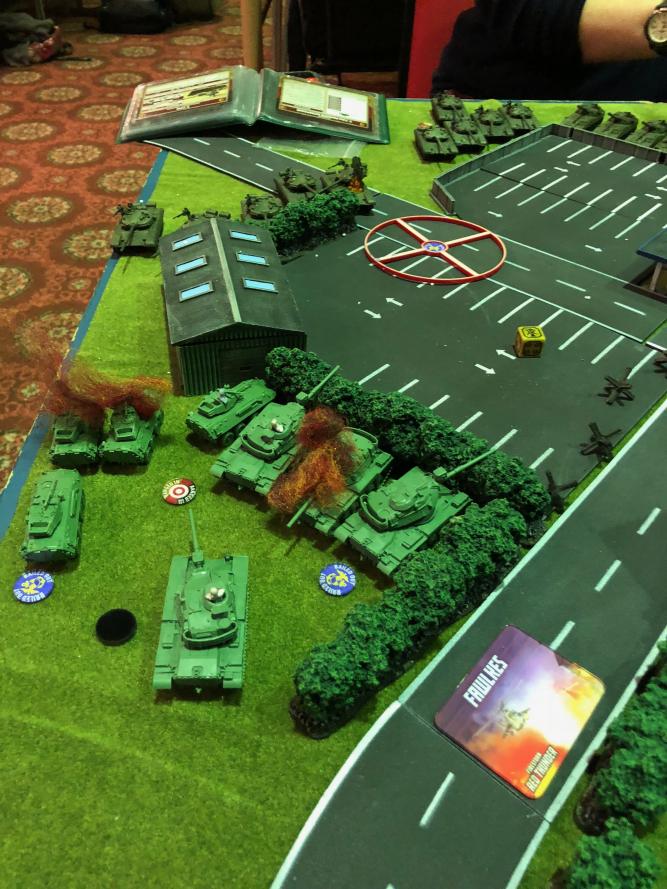 On the southern flank, the Humvee Scout Section was spotted by the advancing BMPs and swiftly eliminated.

In response to the Commie aggression, the other M60 Platoon sprung their ambush, revealing their position adjacent to the now burning Scout Humvees. The LAVs continued to struggle, with the bailed out crew refusing to return to their vehicle, so their commander advanced to the hedgerow in the hope of getting out of sight of the T-72 and putting some shots down range. The AAVP7s of the rifle Platoon, realising their position would shortly be overrun, did what any respectable devil dog would, rapidly advancing towards the T-55s and BMPs, with a view to putting some Mk19 rounds on softer targets. 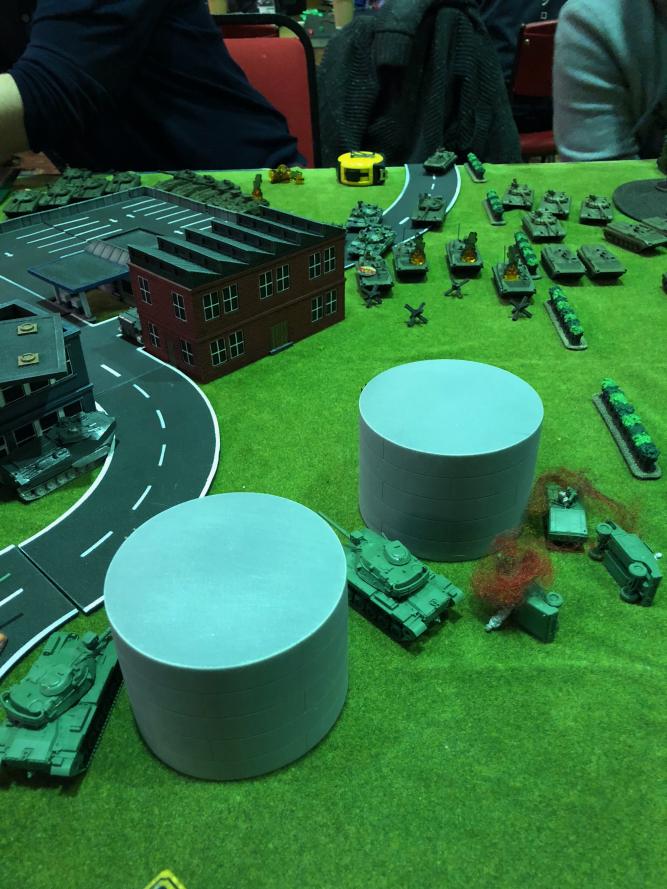 The M60s on the Southern flank opened fire on the BMPs, and together with one of the AAVP7s they managed to knock out three, and bail the remaining vehicle. The rifle platoon’s SMAW laid down covering fire at the T-55s, managing to blow up one of the tanks floundering at the minefield. This left the platoon’s other AAVP7 free to direct suppressing fire at the Spandrels. The LAV commander did likewise, resulting in one smoking missile carrier. The remaining active M60 on the northern flank sent two rounds towards the T-72 platoon covering the parking lot, bailing one. Captain Goodwin directed his own fires at the T-72 flanking by the mechanics garage, but alas these were ineffective. Finally, the Humvee TOW section targeted the same T-72 Kompanie, catching and killing the German tank foolish enough to remain in the open.

Despite urgent calls for air support by Captain Goodwin, the Harriers were still a few mikes out from the combat zone, meaning the Marines on the ground were on their own for the time being.

The close range firefight continued apace, with the northern T-72s wiping out the remains of the M60 platoon blocking their advance, whilst losing one of their number to return fire from a Humvee mounted TOW missile. The second T-72 Kompanie was less successful, with two tanks bogging down in an attempt to cross the concrete wall into the gas station parking lot, and one tank being destroyed by shots from the two of the tanks other M60 platoon, whilst the third tank in that platoon finished off the last BMP on the southern flank. The T-55s slaughtered the brave AAVP7 that sought in vain to stymie their advance, whilst the bailed LAV crew continued to take shelter under their vehicle as German tanks thundered past.

Captain Goodwin, sensing his position was perilous, made a tactical withdrawal to a concealed position next to the Humvee TOWs, firing on the advancing T-72s as he did so, and frantically calling for air support. The Harriers did arrive, however smoke from the burning vehicles interfered with their guidance systems, meaning their cluster bombs failed to range in. At the end of Turn 2, the Humvee Stingers withdrew from the field in good order. 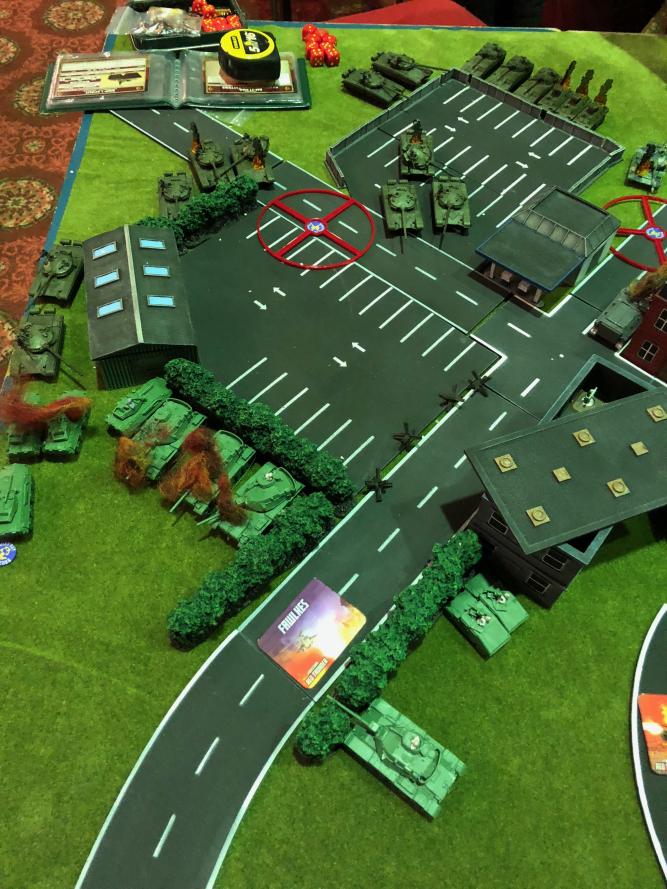 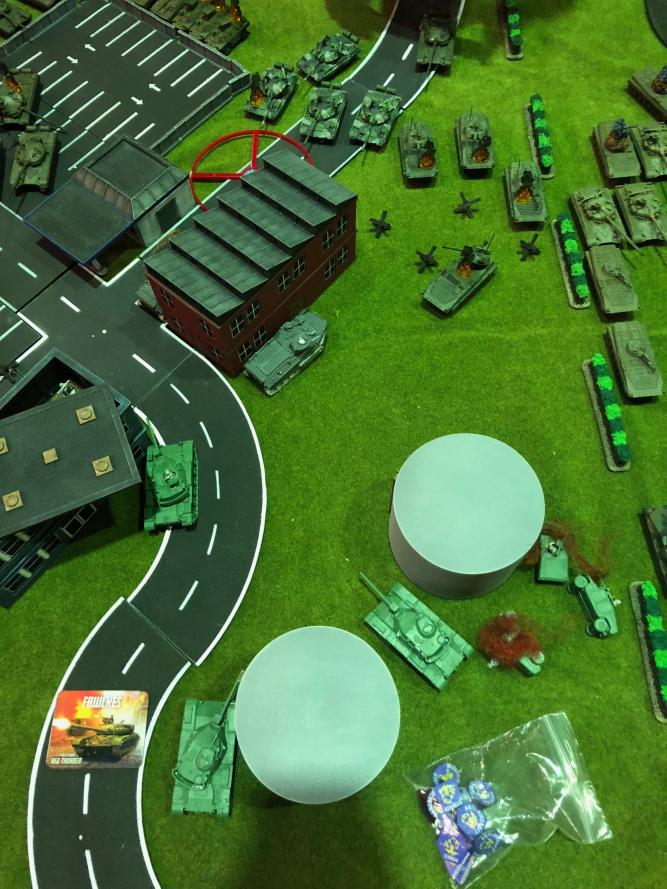 Just as the outlook for the USMC was at its bleakest, the East German battle plan began to falter. The T-55s redirected their advance south, past the remains of the burning BMPs, only to be met with a hail of AT rounds from the M60 platoon, killing three of Red tanks, losing the remaining AAVP7 in return.

Captain Goodwin continued to hold the line against the advancing horde of T-72s, his tank ultimately being destroyed in the process. In a somewhat unorthodox move, he commandeered one of the nearby Humvee TOWs and continued to direct the battle, and anti-Tank shots, from there. 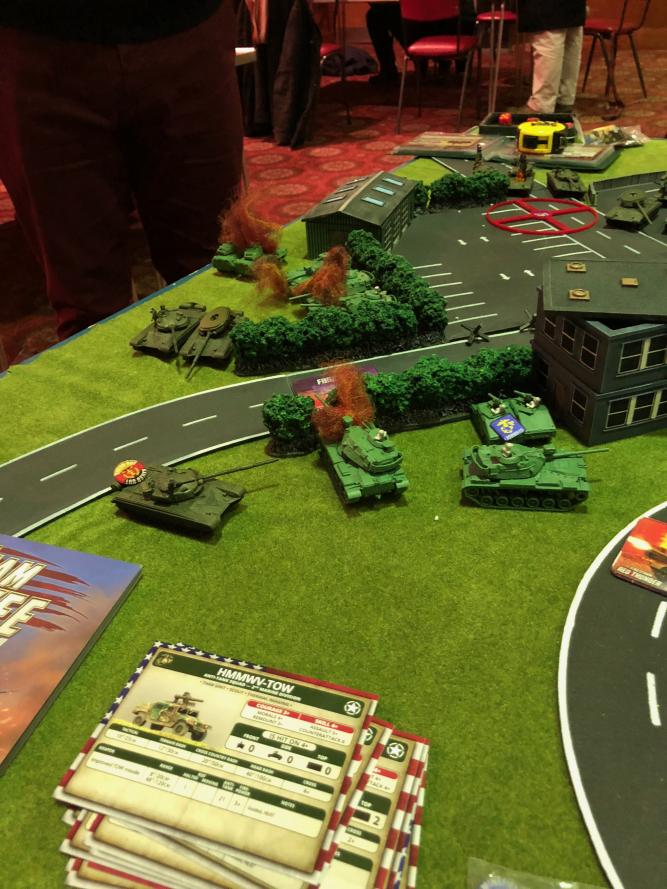 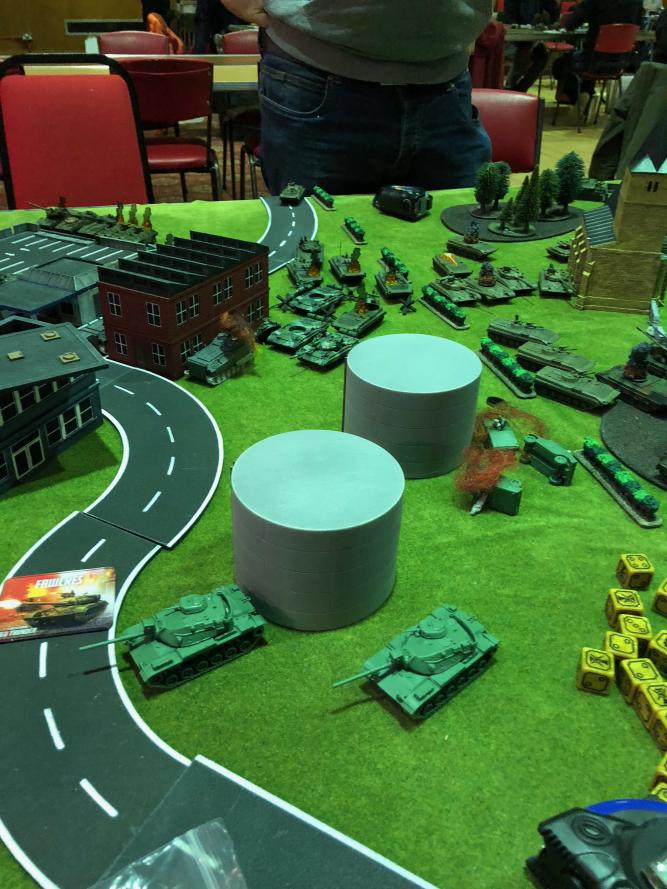 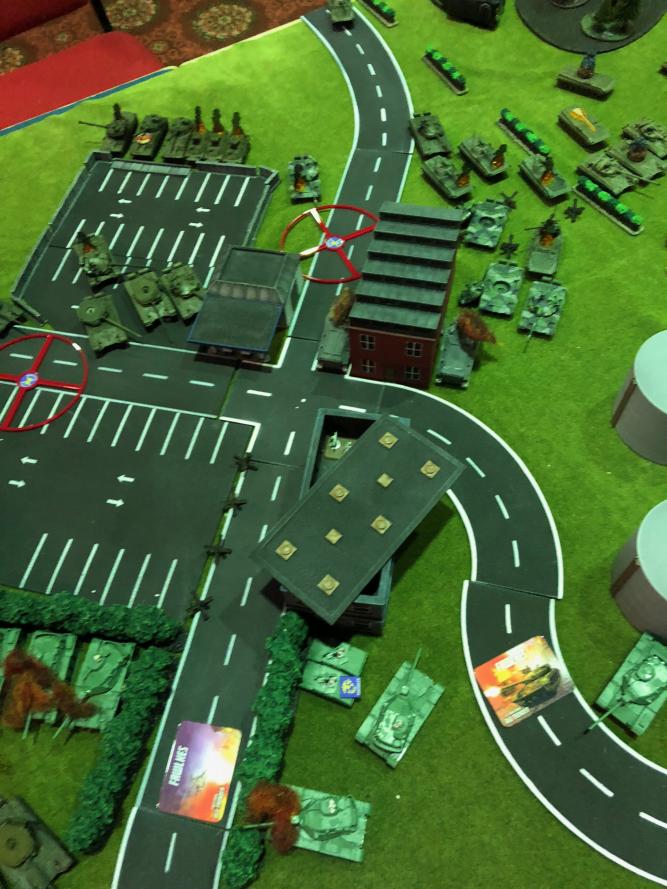 The surviving M60 platoon, having blunted the Southern advance, riskily turned their attention to the T-72s on the Northern flank, eventually destroying the entire Kompanie, but not before the Devil Dogs in the rifle Platoon rushed from their overwatch position to keep the northern objective secure. The remaining Kompanie of T-72s advanced under fire towards the Marine infantry, losing one of their number in the process to a TOW missile. As they advanced, they turned their AA MGs on the swooping Harriers, downing one and causing the other to return to base leaking fuel. The remaining pair of T-72s brazenly attempted to assault the Marines on the road, but a volley of LAWs forced one to bail out, whilst the SMAW turned the other into scrap metal. 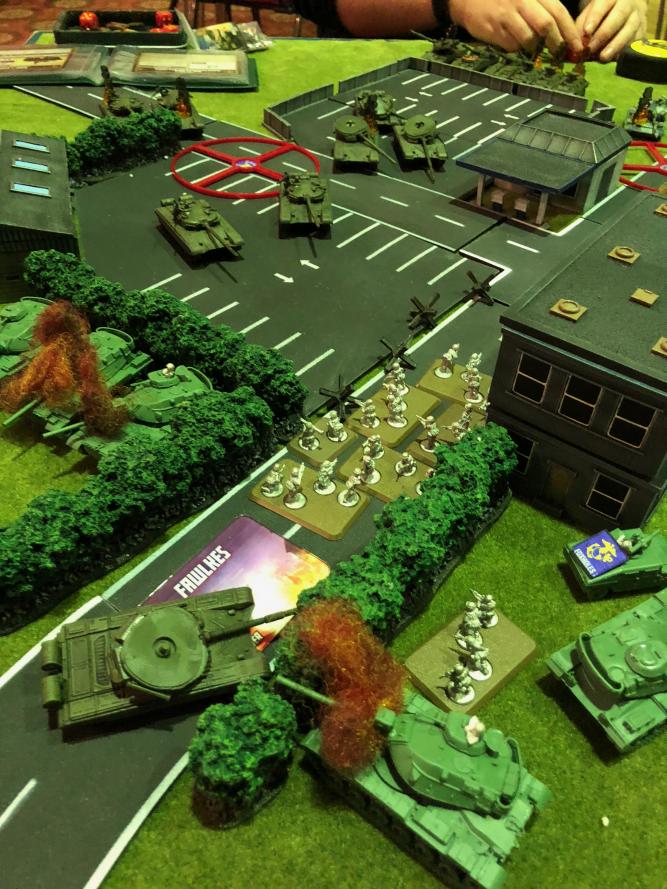 Riflemen to the Rescue! 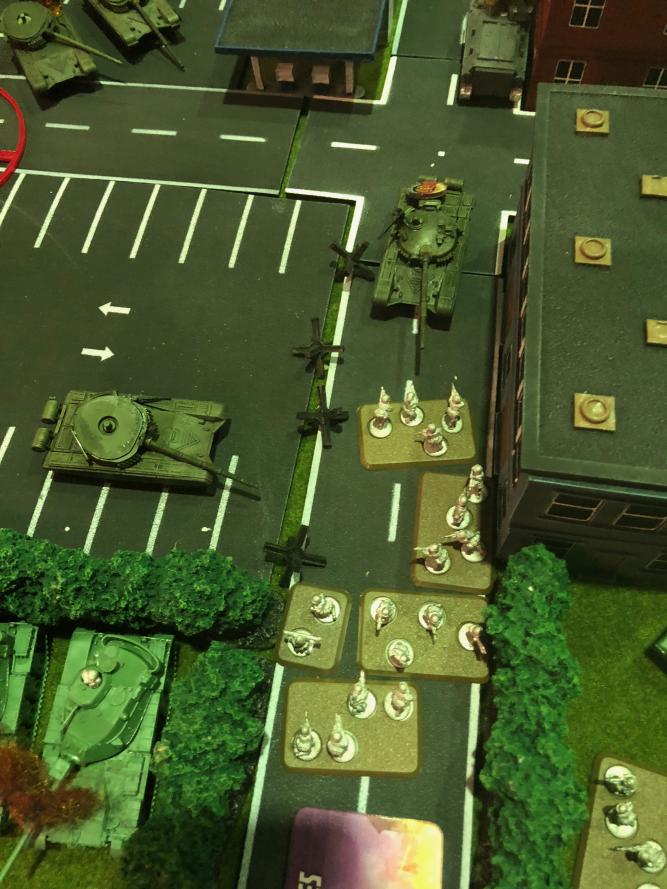 The LAVs withdrew in good order over the course of these turns, the bailed crew finally deciding it was prudent to remount their vehicle, but not before they managed to put some rounds into the East German artillery and Spanrels. Both units were easy pickings without their supporting panzer Kompanies, particularly given the attention they had received from the Harriers over the course of the battle. 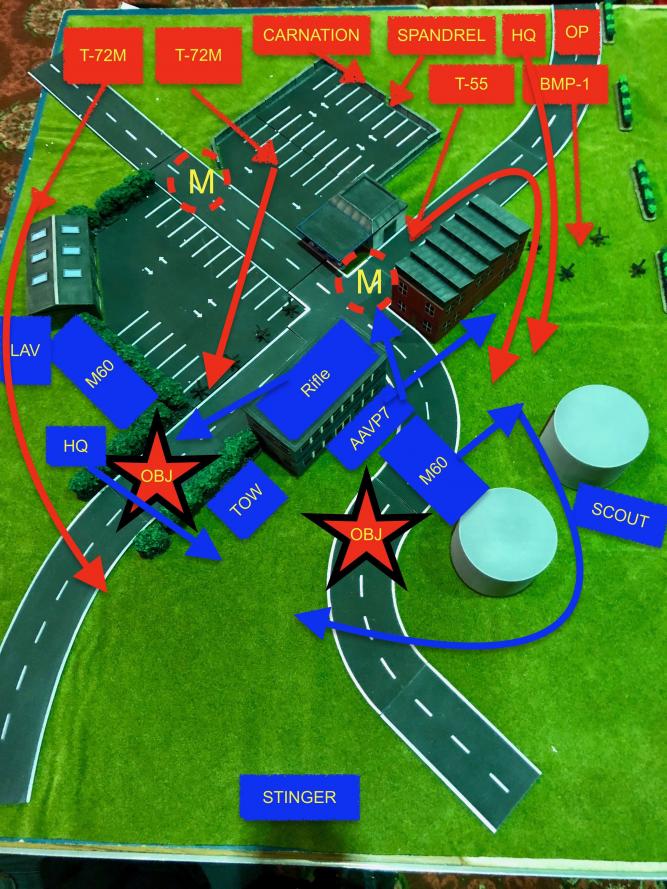 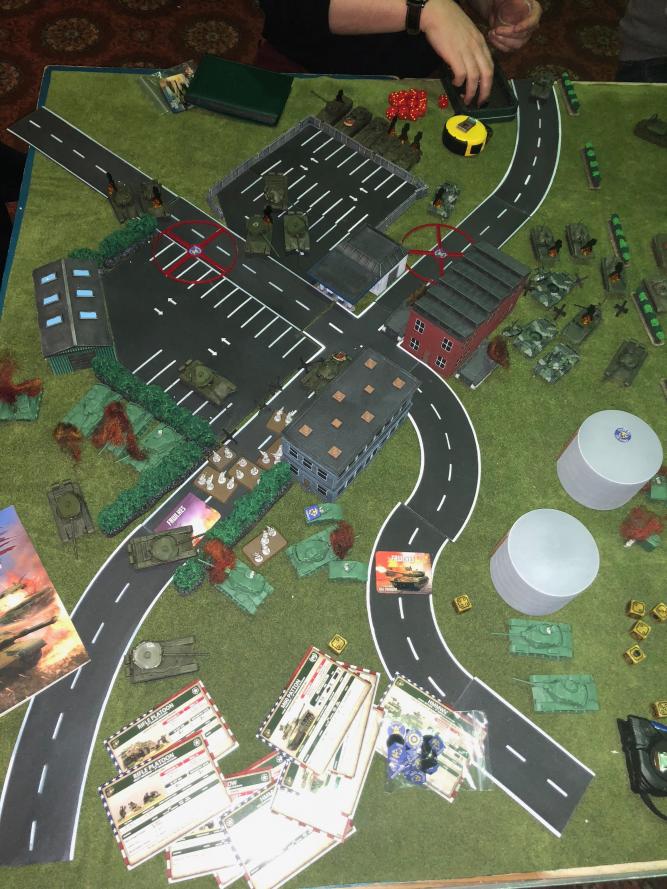 That left the USMC with three platoons and their commander still on the field at the end of the battle, the East Germans having routed. Rather than being forced to withdraw, Captain Goodwin and his men valiantly held the line against the Communist hordes, winning 4-3.

Here's something educational for your enjoyment.