Reuters reports that valiant efforts by Armoured and light elements of the US 1st Cavalry Division in the Hof Corridor to protect supplies en route to encircled US forces in Leipzig have failed.

A Humvee Cavalry Troop led by Lieutenant Jackson was tasked with providing security at a cross roads and vital river crossing to the North of the planned route of a NATO supply convoy. Before the break of dawn, Jackson’s scouts observed an elite battalion of soviet T-64s, supported by infantry and artillery taking up establishing an HQ in an abandoned train station, before forming up for the assault.

Calls for reinforcements from the main column resulted in swift support from the lead elements of an Armoured Cavalry Troop, comprising a unit of heliborne infantry, a flight of Cobras, an armoured scout section and the Troop’s Commander, Major Horton.

Taking the soviets by surprise under cover of darkness, Horton positioned his infantry in prepared positions on a hill overlooking the road between the crossings. He established his HQ behind the hill and sent his scout section ahead to establish a position to conceal his Cobras until they were needed.

Jackson’s Humvees meanwhile secures the western flank and radioed for the rest of the Troop to join their position. 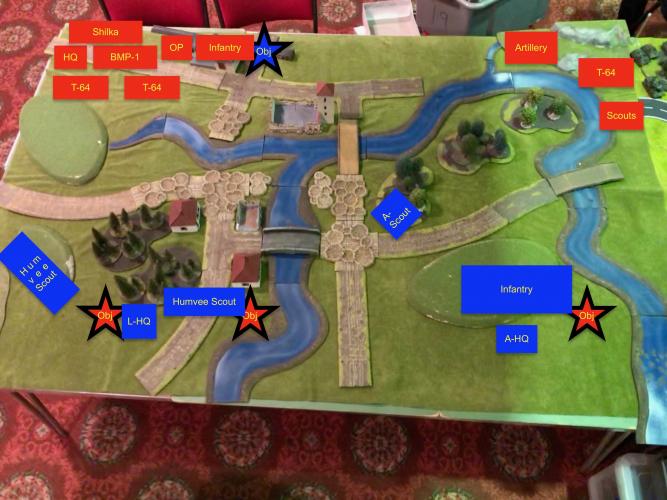 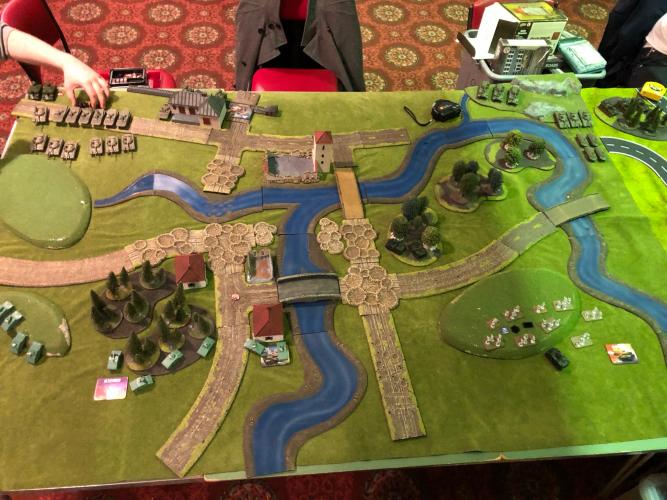 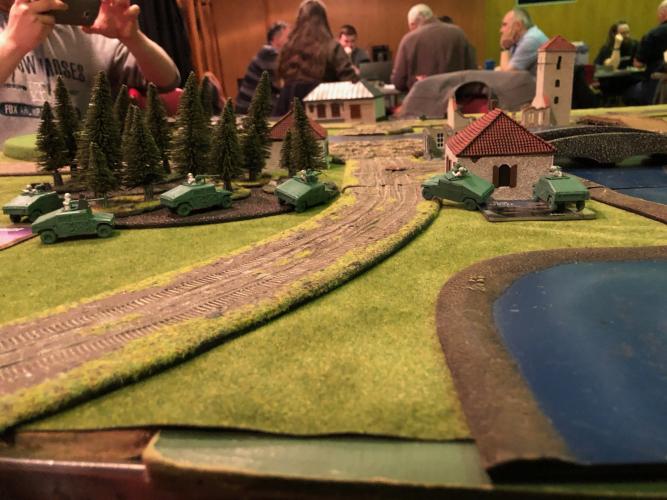 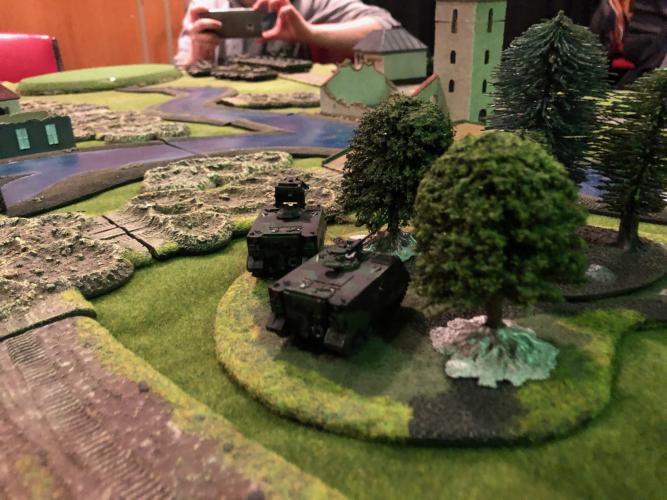 Can you see them?

Owing to the darkness, and an unusual level of stealth employed by the Commies, the US forces were unable to acquire any targets, so simply held their ground and awaited reinforcements. The Soviets crept forward under cover of darkness. They were joined by a flight of Hinds, who appeared to the rear of Jackson’s position and proceeded to pummel one of the Humvee Scout Sections. Having witnessed the Hinds’ success, the leading company of T-64s also opened fire on the Humvees, but with less success. The Humvees weathered the storm, barely, losing one TOW missile and having the crew of the other bail out of their vehicle. 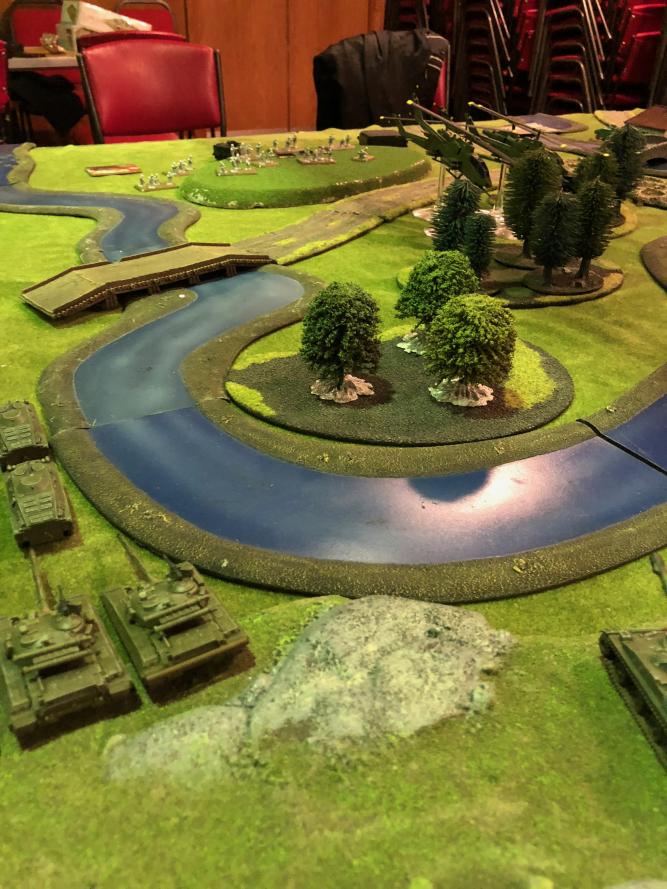 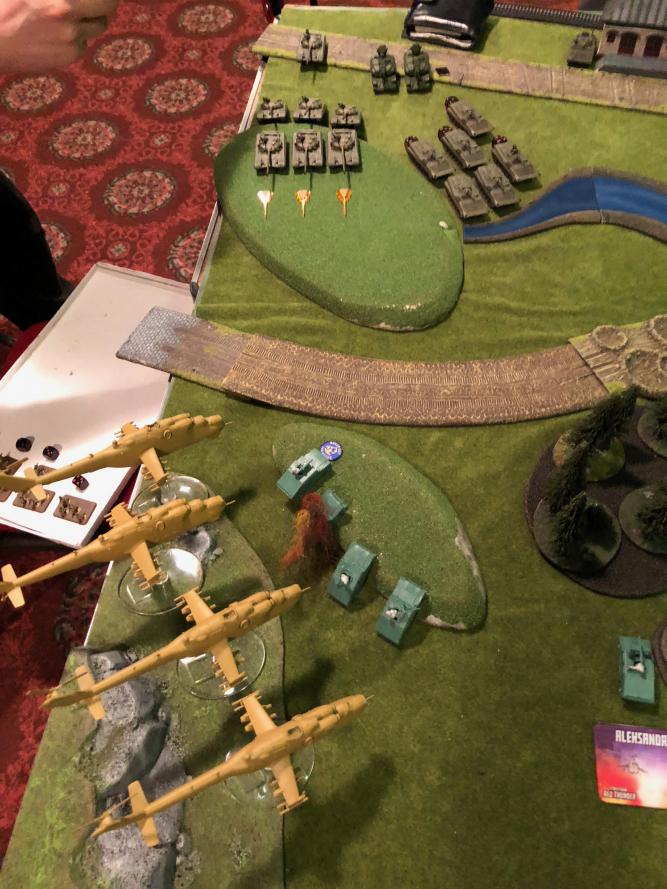 Where did they come from?! 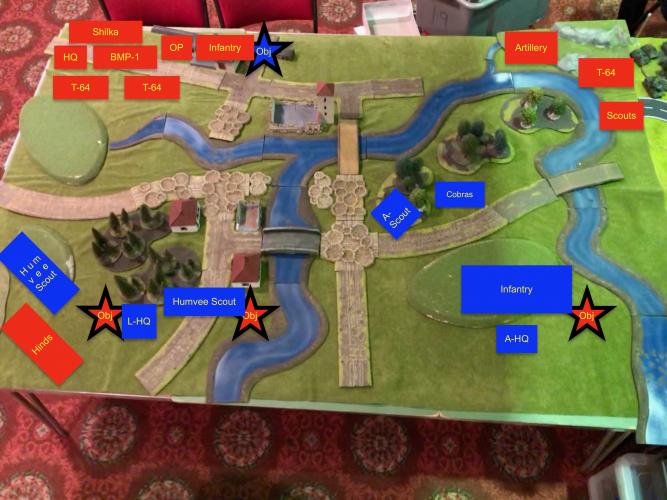 Again, with few viable targets, the US forces held their nerve, and held their fire, waiting to see the whites of the Ruskies’ eyes. The Russians meanwhile showed no such restraint, creeping ever closer to the US positions and firing as they went. The Hinds swept along Jackson’s position, subjecting his second Scout Section to heavy fire, and destroying both TOW missile Humvees in the unit. 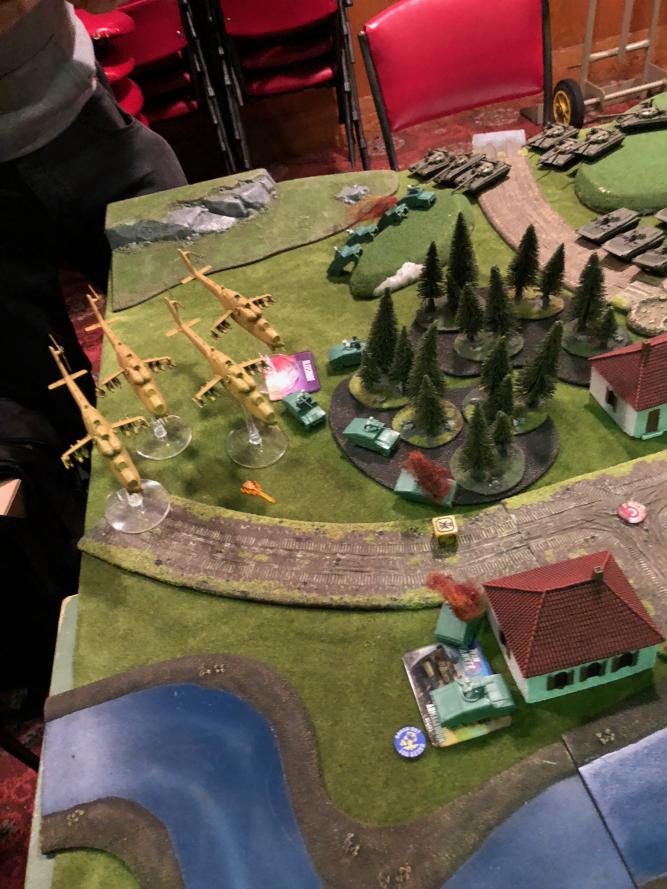 With the sun glimmering on the horizon, and with Soviet scouts within spitting distance of his position, Horton gave the order, “All units, open fire!” The infantry on the hill rushed to their commander’s defence, blasting the Scouts with their LAWs and Dragons. One Armoured car was destroyed outright, whilst the crews of the remaining three vehicles were forced to abandon their vehicles under the hail of anti-tank rounds and fled the field. The cobras, until now ineffective, managed to bail one of the T-64s following behind the Soviet scouts. 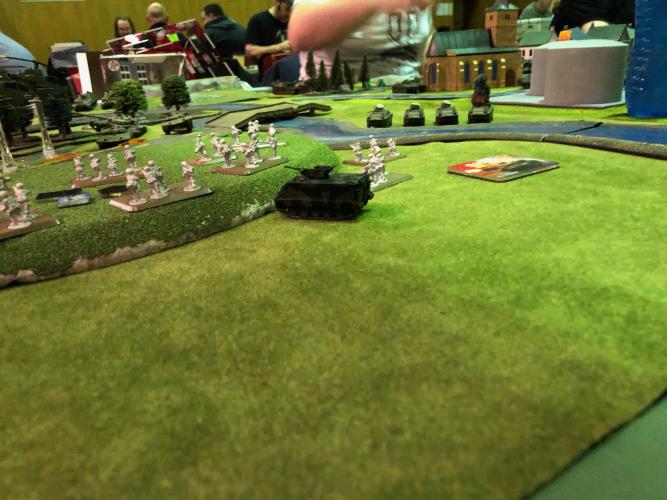 On the western flank, things were looking grim for Jackson and his men, as the T-64s continued to advance in strength on their position, followed by infantry mounted in BMP-1 transports and supported by the merciless Hinds. Notwithstanding the vast force arrayed against them, Jackson and his troopers bravely held the line, knowing that the supply convoy depended upon them.

Finally, the rear elements of Major Horton’s Troop began to reach the combat zone. A unit of VADS ambled onto the field, clearly not receiving their orders to blitz into position. They rolled to a halt beneath the Hinds, surveyed the damage done to the Humvees and eagerly exacted a vengeful toll upon the Russian birds, downing three and causing the survivor to flee with a fuselage full of holes. The Troop’s unit of IPM1s, newly arrived in theatre, also rolled onto the battlefield. Alas, having received previous transmissions about a threat to the Old Man, they arrived in support of Major Horton behind the hill, too far away to provide significant support to Jackson’s position. The morale of Jackson’s Command was further dampened when the soviets commenced a rolling artillery bombardment from the cross roads, wiping out the remainder of the second Humvee section. Nonetheless, the crew of the bailed out TOW Humvee on the hill finally found their metal, re-mounting and destroying an advancing T-64! The other T-64 company rounded the hill, and fired on the VADS, knocking out one of the AA vehicles. 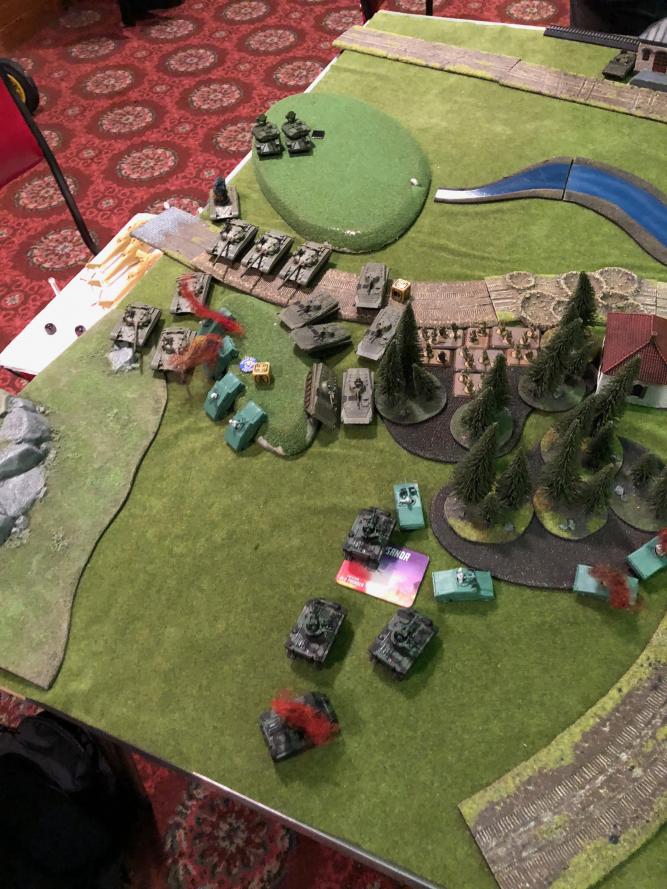 Did someone call for some AA? 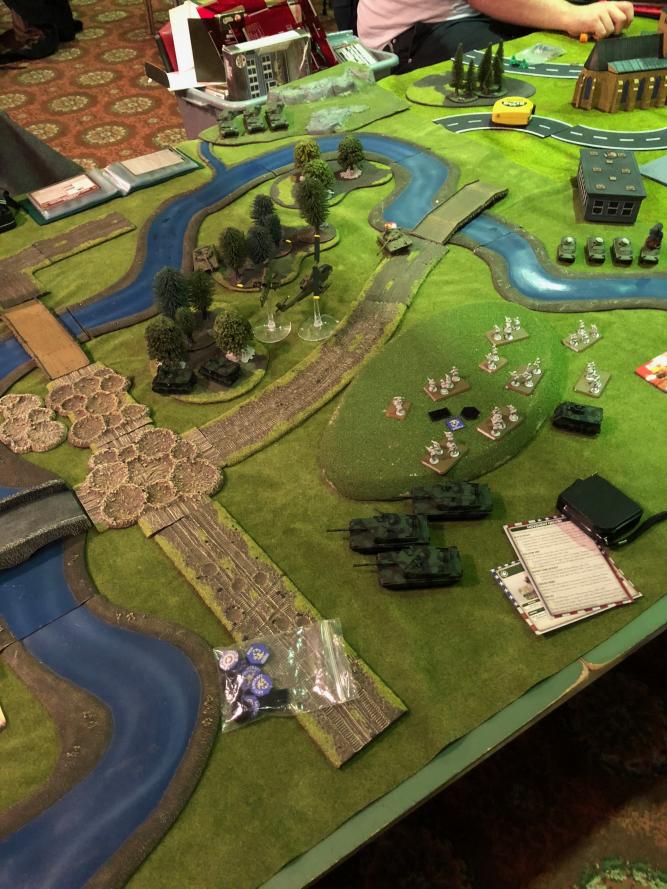 ust as all looked lost for the US forces, Jackson’s last Humvee section arrived from the rear, blitzing onto the slope of the west-most hill. They were accompanied by an armoured scout section from Horton’s Troop, who also blitzed on to support the VADS. The IPM1s advanced to the riverbank, to give one of the platoon line of sight to the forward T-64s. The newly arrived Humvees, ITV and repositioned IPM1s took a heavy toll on the Soviets, wiping out all but one of the advancing T-64 company. The Cobras meanwhile, destroyed one of the T-64s from the second western company, whilst the centrally positioned ITV, until now having had little impact on the battle, finished off the company. The VADS, having rallied to Jackson’s position, and finding themselves without aerial targets, focused fire on the BMPS (whose passengers had dismounted into a nearby forest), with little effect. 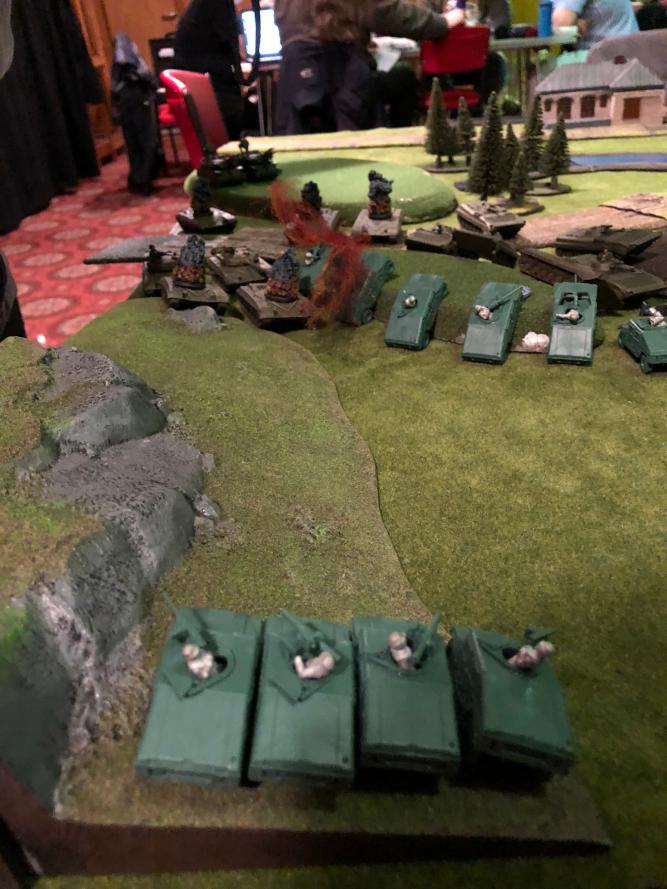 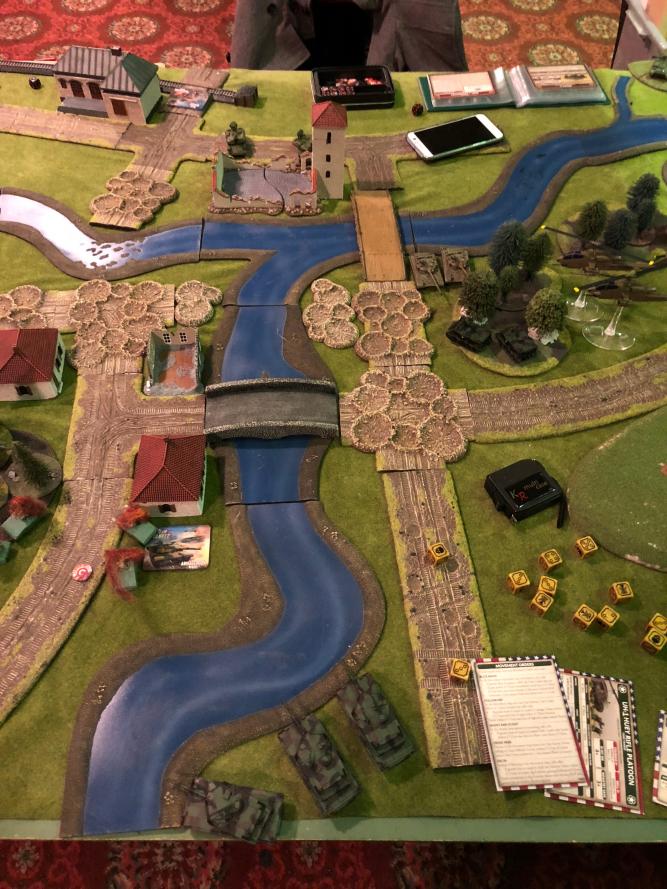 Shooting across the river.

The wrath of the Russians however, was swift and terrible. The infantry company advanced through the woods onto the objective, skirting the VADS position. The BMPs meanwhile split their fire between the VADS and armoured Scout section, destroying all three VADS and killing the M113 in the Scout section. The T-64s meanwhile finished off the Humvee unit on the hilltop, and Jackson’s XO caught a stray round, killing him instantly. Jackson could see that the remaining ITV of the scout section, barely holding on to the objective, was wavering, however despite his urging, the crew fled the field, with Jackson following them in disgrace. With none of Horton’s forces in a position to contest the objective, the way was now clear for the Soviets to advance on the supply convoy. Our boys in Leipzig will have to hope fresh ammo can be airdropped to them! 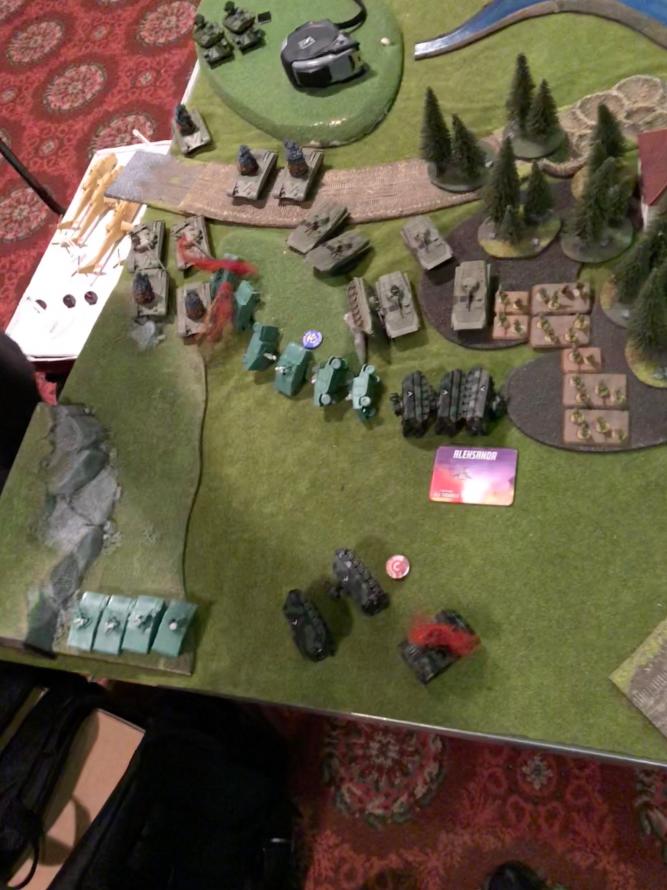 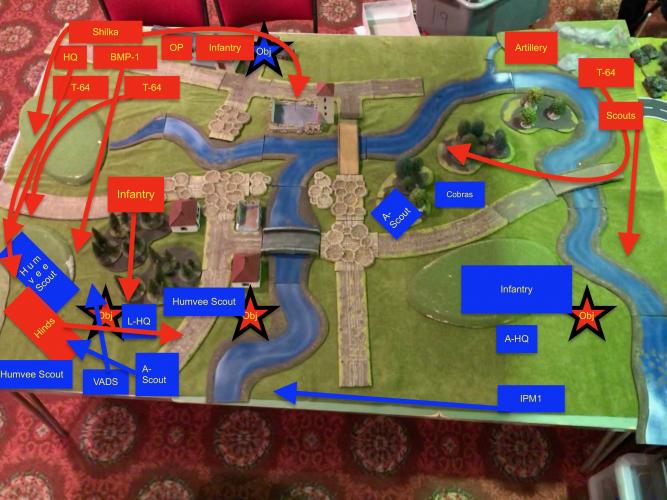