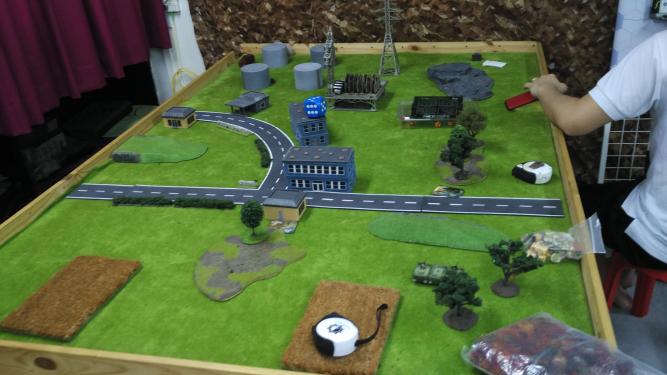 Lay of the land. I chose to deploy on the right hand side of the table 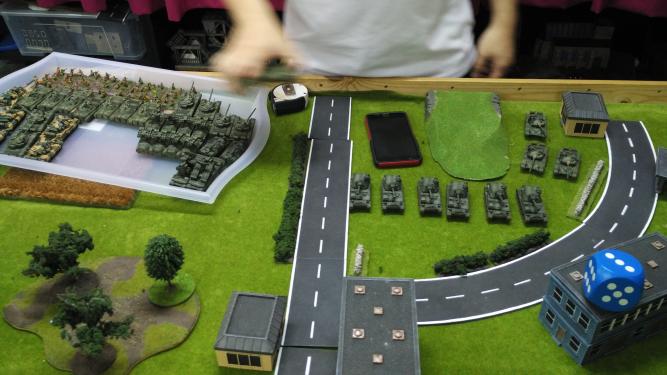 Lining up the guns 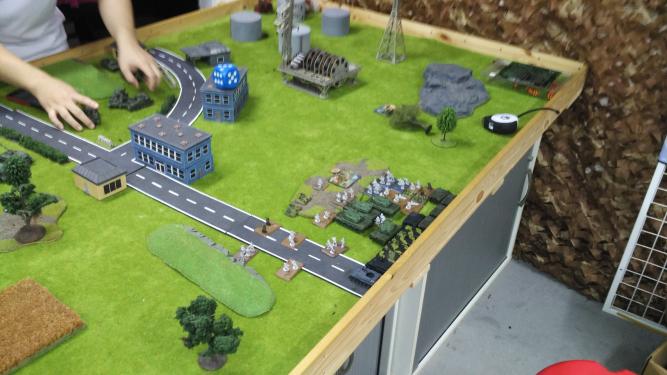 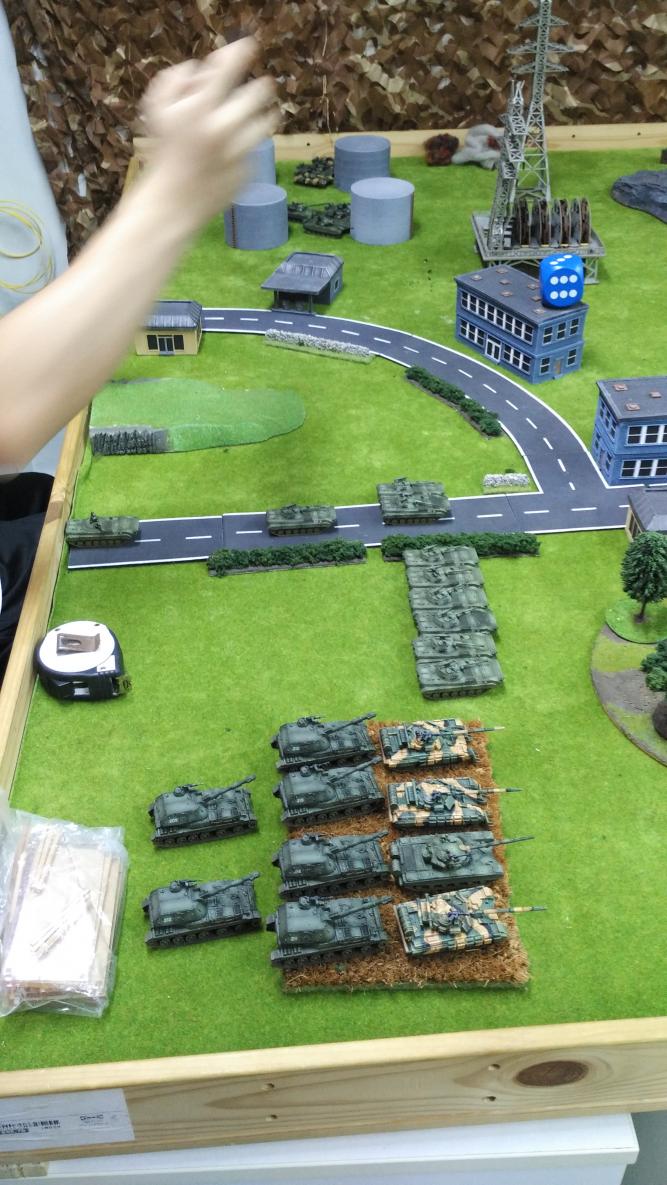 No reserves arrive, while I decline to reveal my ambush. I move up my Leopard 1s to take shots at the BMP-2s coming down the road. One British infantry platoon moves up to cover the other objective while the other stays put. The attached FV432s dash to cover in the other quarter. An abysmal round of shooting sees me hit and wreck only two BMPs. One AK team joins their tin can in the hereafter.

My opponent's reserves don't arrive either. Unsurprisingly, he rolls up on both flanks. His infantry dismount and spread out between the woods and the nearby buildings while the T-64s dash alongside them. On the other flank, the T-64s and their Ostdeustche Verräter friends line up to shoot at the exposed infantry unit along with some supporting artillery. The BMPs fire their ATGMs down range and down 2 of my Leo 1s. Meanwhile my horrible rolls continue and I lose both Milans and 2 Carl Gustav teams. The surviving Leopard doesn't rout. 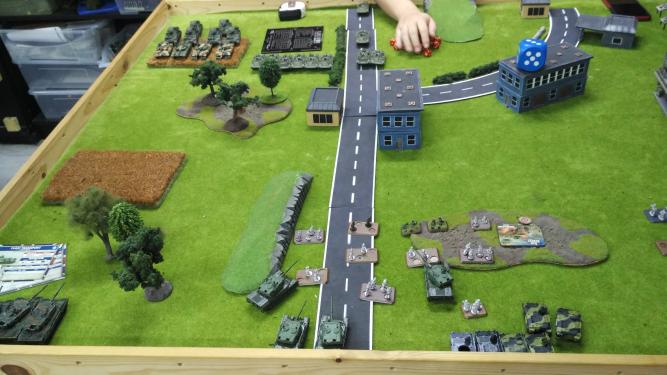 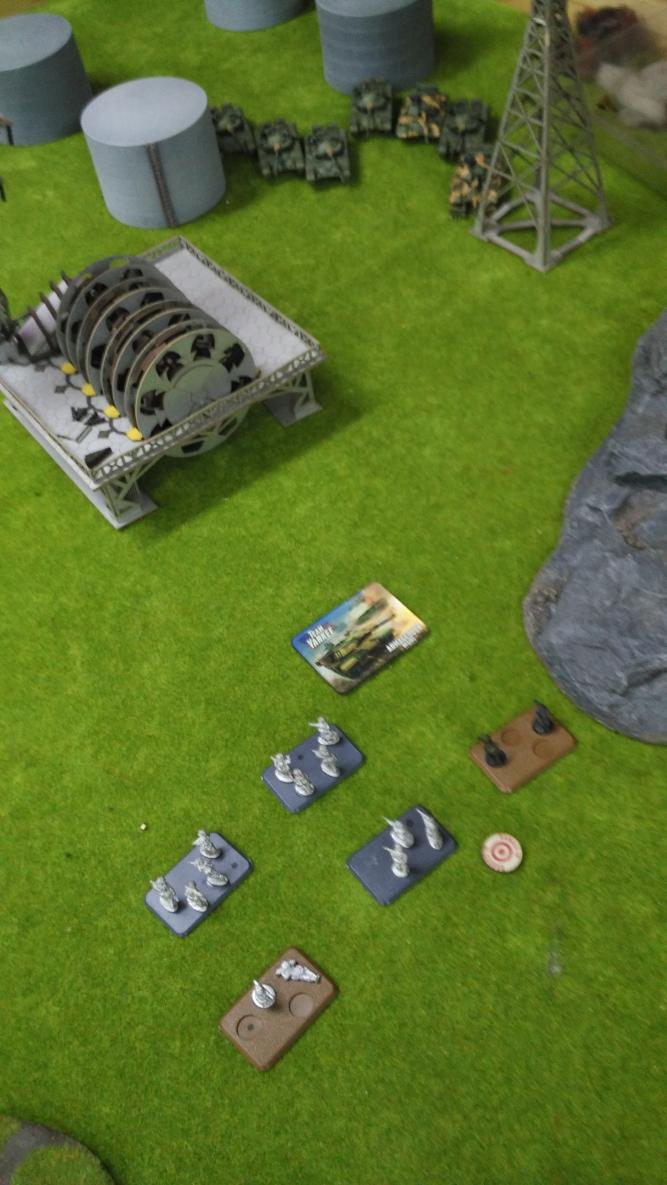 I reveal my ambushing Leopard 2s behind my little patch of woods facing the tanks that are threatening my weakened infantry unit while my Gepards arrive from reserve and move to flank the same tanks. The pinned infantry rally and successfully dig in, and the remaining Milans from the other unit blitz-shuffle to engage the further tanks as well. The surviving Leopard 1 hides behind the vacated woods.

The Gepards knock out 2 T-72s and bail a third. The Milans only succeed in bailing one T-64, but now Lady Luck decides to smite my opponent and all three T-64s go down in one volley from my Leopard 2s. The sole surviving T-72M doesn't break, unsurprisingly.

Against the threat of a full volley from Gepards in the side, my opponent is forced to pull back the last two T-72s on the right flank(Battalion HQ included). On the other side his push continues with his infantry breaking the cover of the woods while his remaining T-64 unit continues moving forward to threaten a flank on my Leopard 2s next turn. Some of his BMPs occupy the position his infantry just left while the rest roll down the road. The 2 T-72 shots both find their marks, while the PKM teams sitting tight in the building spray my exposed Milans. The curse that seems to linger over this table strikes again and both Milan teams go down. Artillery continues pounding the other infantry unit but does nothing other than pinning them again. 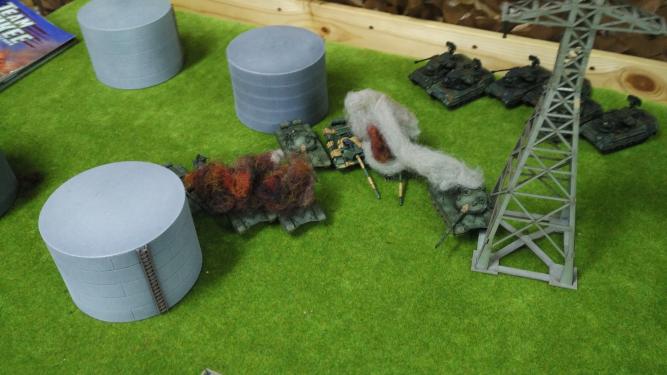 Wurst case scenario for the Soviets 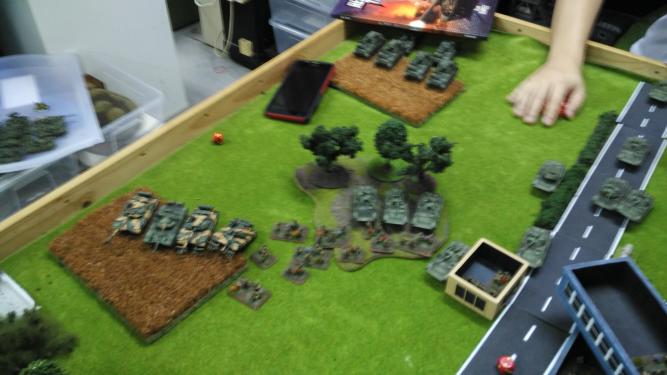 Both my artillery units arrive and successfully blitz onto the table. The remaining Gepards continue giving chase to the T-72s, however only one can get into their side arc. Now that the infantry are exposed one group of FV432s move up to harass them while the unit that dashed away on Turn 1 dash back to where they were before. The last Leopard 1 comes out to take potshots again. Most importantly the Leo 2s swing around to engage the remaining T-64s in a risky move that exposes their rear to the surviving T-72s.

The FV432 mortar carriers drop smoke to cover the exposed Leo 2s while the sole Gepard that can do any damage knocks out yet another T-72, leaving the East German HQ tank by himself. The wrath of the dice strikes again and the T-64 unit once again melts to a single volley from the Leopard 2s, leaving both HQs with no accompanying tanks. The LARS battery bombards the infantry and BMPs, taking out 2 stands and bailing a BMP. Small arms fire from both the FV432s and the infantry only knock out one more stand. The Leo 1 takes out another BMP.

My gamble with the Leopard 2s gets punished when my opponent brings on both the last unit of T-72s and the Storms from reserve. The Storms pass their blitz check and together with the T-72s are staring directly at my Leo 2s' exposed flanks. Fortunately for me the presence of the Gepards at least forces my opponent to split his fire. His infantry unpin easily and move forward into a position where they can threaten to assault my positions.

The Storms both hit but fail their firepower checks. The spectre of duds haunts my opponent for the rest of the phase; despite his best efforts he only gets one confirmed kill while the other 2 are bailed. One more Gepard pays the ultimate price for their bravery, meanwhile the BMPs and artillery fire at my FV432s and infantry, knocking out 3 tin cans and 1 GPMG team. The Leopard 2s decline to quit the field. 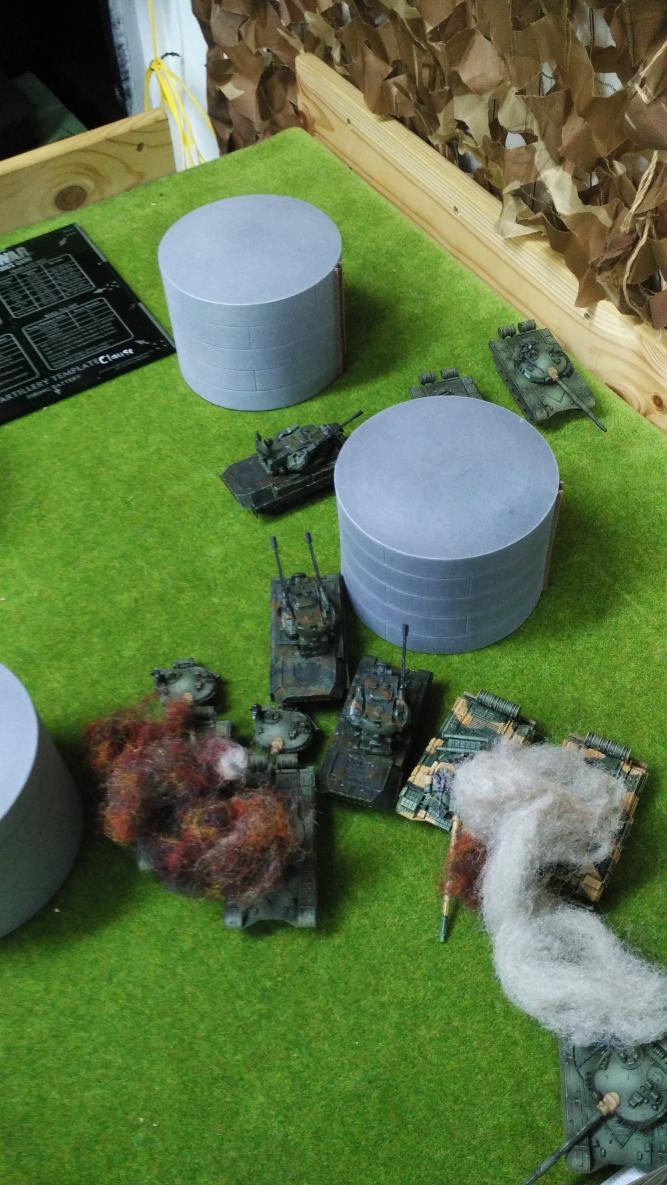 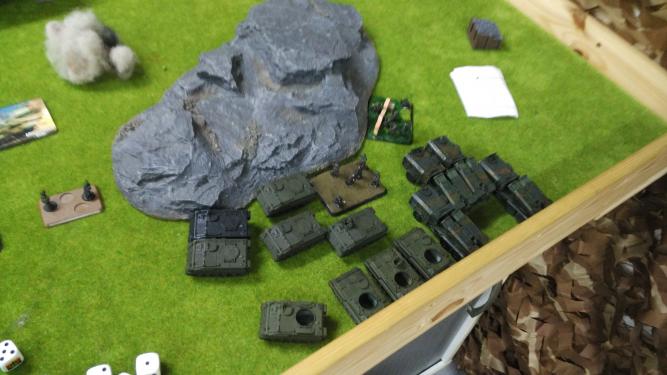 My Luchs arrive but can do nothing so I opt to have them hide behind the now extremely crowded rocky hill. Both Leopard 2s remount and charge towards East Germans while the Gepards once again work their way into the East German flanks. The second wave of FV432s continuing driving up to get into small arms range, while my HQ Leopard 1 moves up and lines up a shot at the Storms.

My HQ shows why he's boss by deleting the Storms singlehandedly. The Gepards knocks out one T-72 and bails another while the Leo 2s only kill one more. The last Leopard 1 chews away at the BMPs again. His infantry proves more resilient however, despite pounding from both artillery batteries and my FV432s he only loses a single stand.

At this point my opponent has no relevant reserves. His HQ T-64 moves to shoot at the tail end of my Leo 2s while the surviving T-72s stick around and move forward to get up close and personal with my Leo 2s. One more Leo 2 and more FV432s go up in smoke, however his shots fail to find purchase on my Leo 1s and infantry. My units' nerve holds.

The sole surviving Leo2 gets closer to the T-72s in order to cover his rear. The 120mm gun only bails the remaining non-HQ tank however, while the Gepards knock out the East German HQ tank. Command then jumps to the last T-72. My Leo 1s work on the BMPs, leaving only 2 of them operational. Fortune continues smiling on the Soviet infantry as artillery fire does nothing except pin them.

As it turns out, Fortune's favour has its price. The last T-72 and the infantry both fail to remount/rally respectively, snatching away the option of a last ditch assault. Only the HQ T-64 can get within 8" of an objective to prevent me from winning on my next turn, but that would be certain death for the tank. He declines to sacrifice his HQ and throws in the towel. 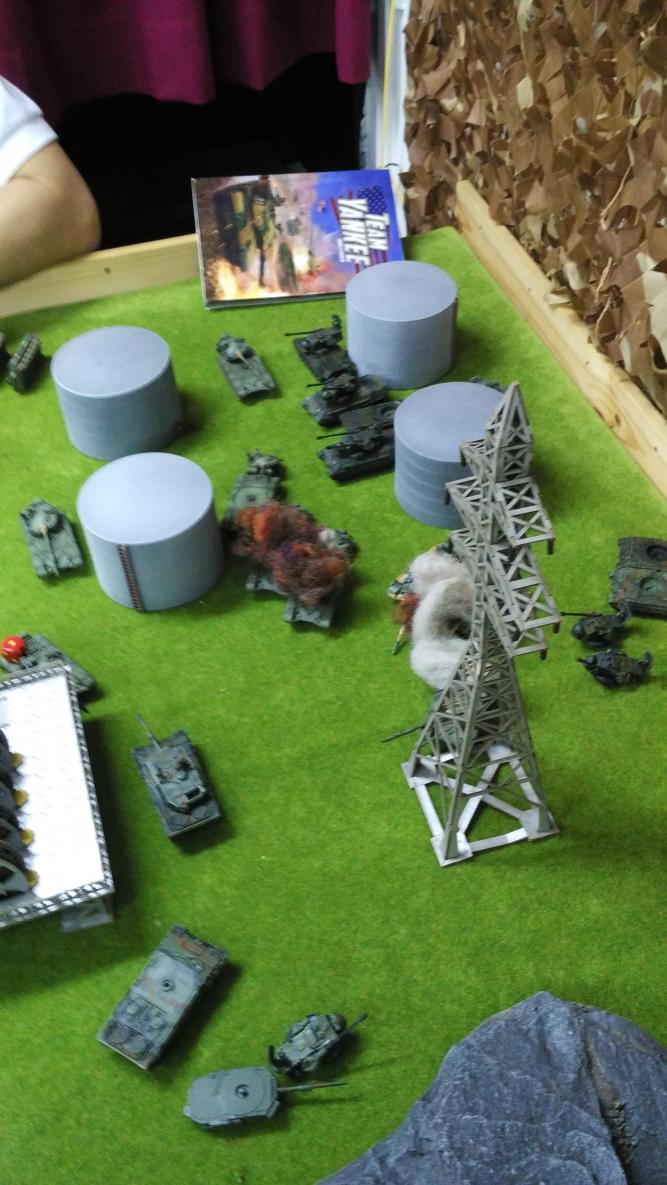 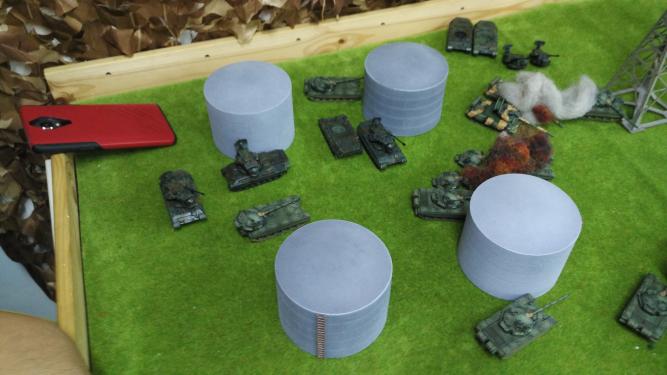 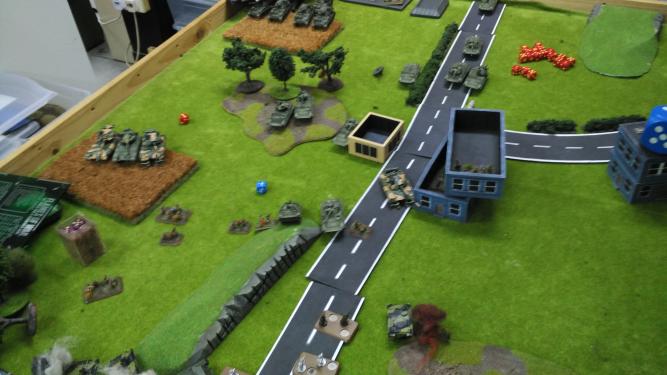 This game was a roller-coaster of shit dice. However, I managed to outlast my cold streak while my opponent didn't, giving me the win. But, I can't end this report without crediting my obvious MVPs and brilliant overperformers, the Gepards. They held up an entire flank more or less by themselves, even knocking out well about their worth in MBTs.

Mutterlieber gloated to himself as he stood in the cupola. He had crushed his enemy, seen them driven before him, and was hearing their lamentations in the form of their commanders' angry shouts as they beat a hasty retreat. Though his command had paid a heavy price, he had made the road to Frankfurt that much longer for the Soviets.

No matter how he skinned the sausage, Mutterlieber knew deep down that the wurst had yet to come. But for today at least, the glory was his.