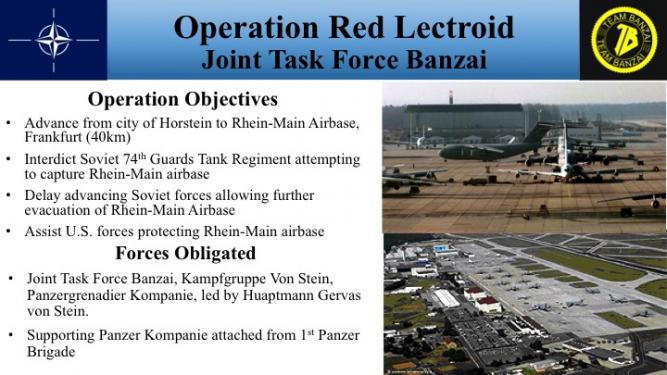 (S) The engagement between the Soviet BMP Motor Rifle Battalion and Kampfgruppe Von Stein is photo-documented below. 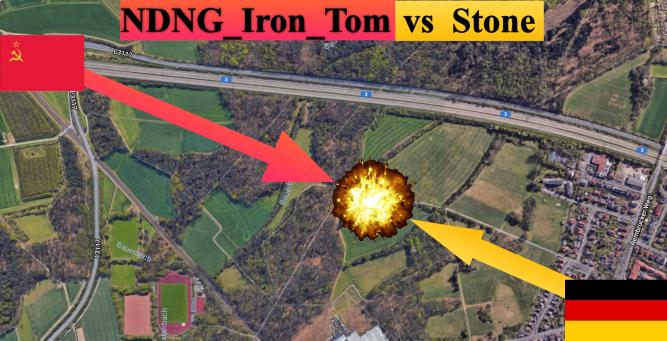 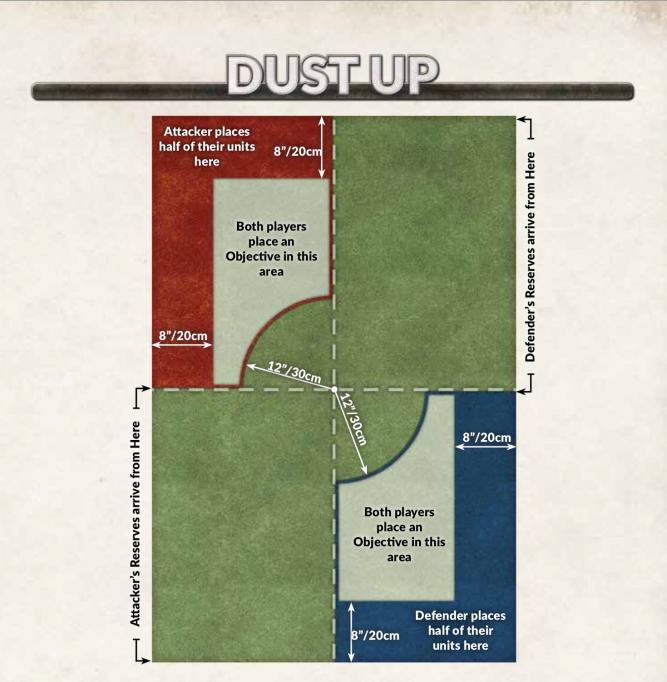 Layout of the battleground with Soviet and West German deployment zones designated as well as objective locations. 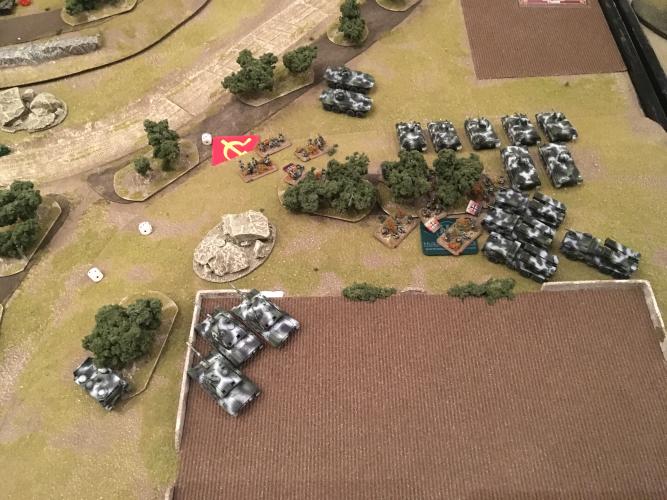 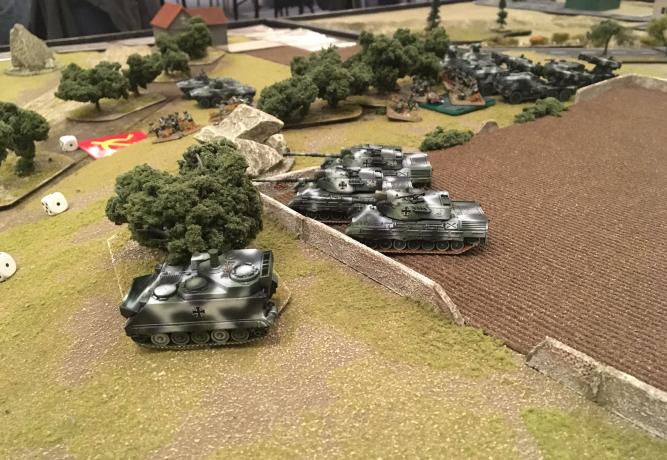 Von Stein’s Leoprard 1 4th platoon hopes a short wall will add to their slightly less than optimal front armor while the M113 OP takes up residence amongst the trees. 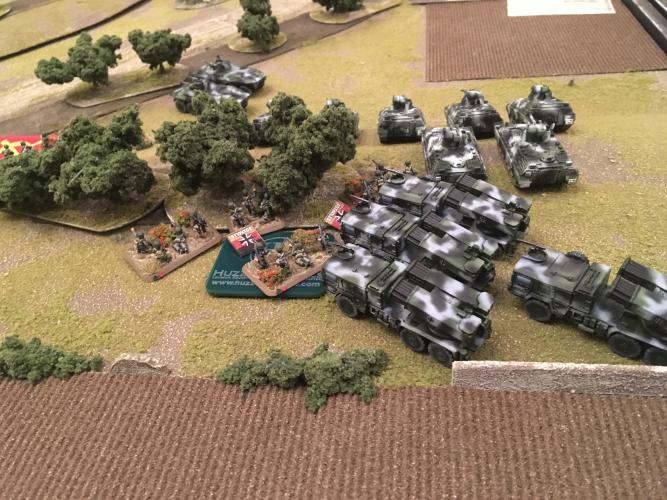 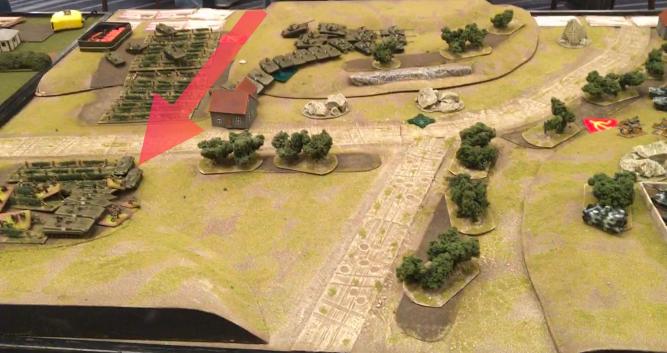 Soviet armor creates a metal wall behind the hill’s ridgeline forest while BMPs spearhead forward and disgorge infantry into the vineyards. 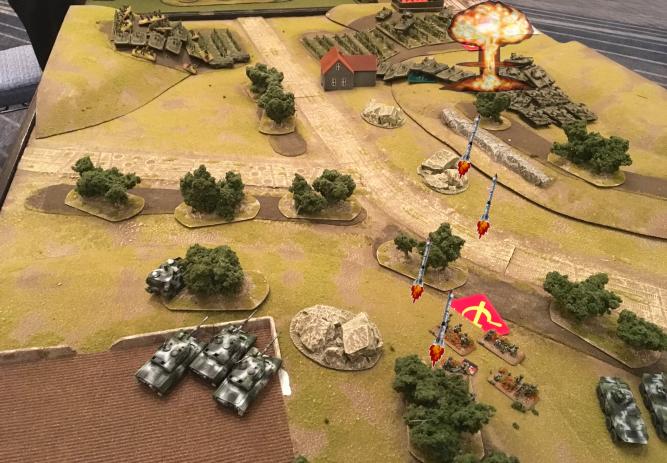 Von Stein’s LARs batterie launches a volley of missiles at the massed Soviet horde and... bails two tanks and one BMP (all of which remount during the Soviet turn, laughing at the West German frustration). 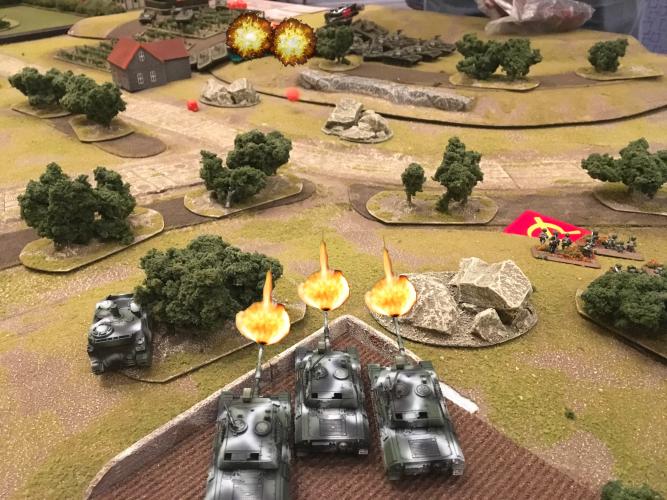 West German Leopard 1 platoon opens fire on one of the Soviet BMP platoons destroying two of them. 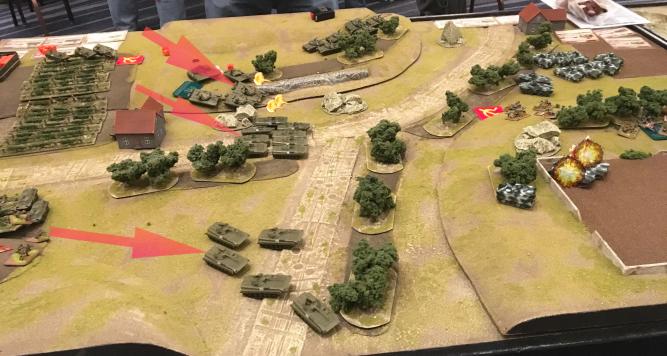 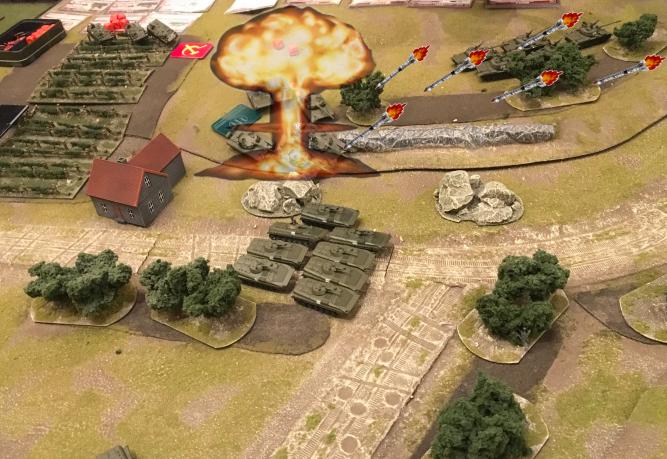 The sky rains with missiles as, once again, the Von Stein’s LARs batterie opens on the advancing Soviet Armor Battalion. Luckily, the Russians saw the forecast, brought their umbrella, and weathered the storm unscathed. 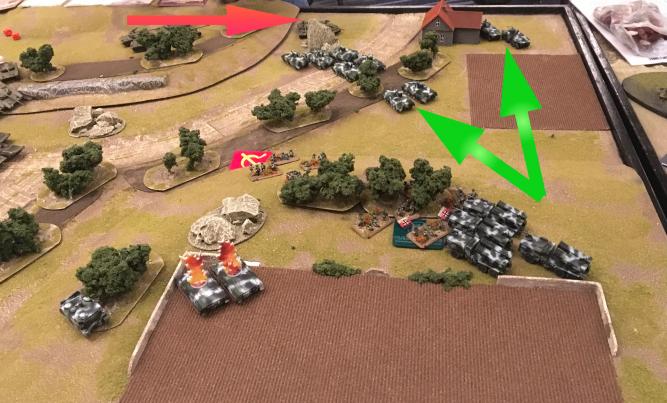 West German Marders and Luchs attemp to flank the Soviet position but are quickly cut off by the Russiam armor. 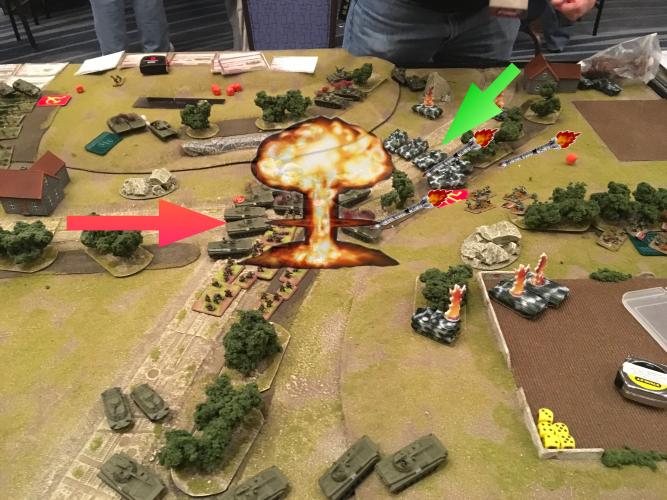 Soviet BMPs advance to the objective and disgorge their infantry into the woods. Kampfgruppe Von Stein’s LARs unleash hell into the woods killing a number of the infantry and BMPs. Marders rush down the road and shoot into the pile of BMPs, wrecking a few. 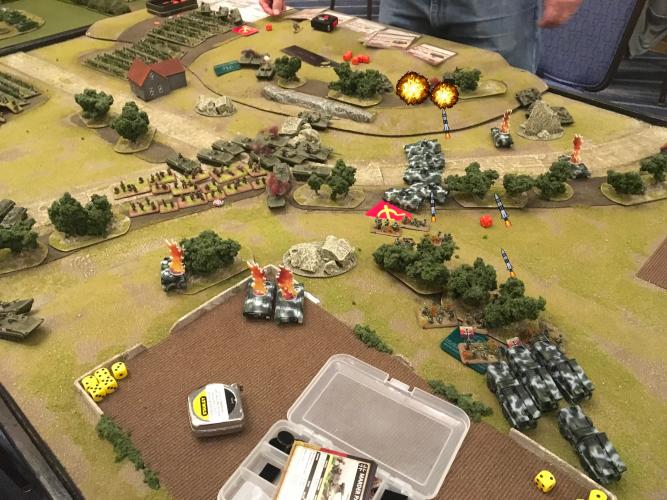 While the Panzergreandier Milan teams, dug into the hill, open on the Soviet armor peaking out of the woods at the crest of the opposite hill. 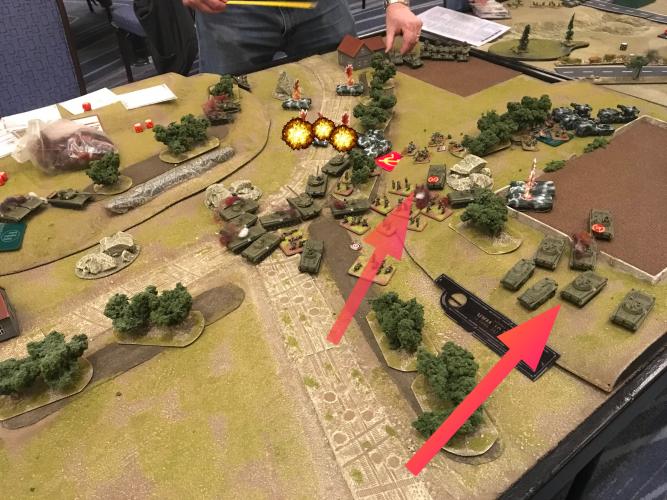 Soviet BMP and infantry storm forward, surrounding Kampfgruppe Von Stein. T-72s open fire on the Marders, destroying three of them. West German force attempt to respond, with Panzergrenadiers unloading on the incoming Soviet infantry and BMPs, and though, a valliant effort is made, not enough damage is done to stem the red tide. 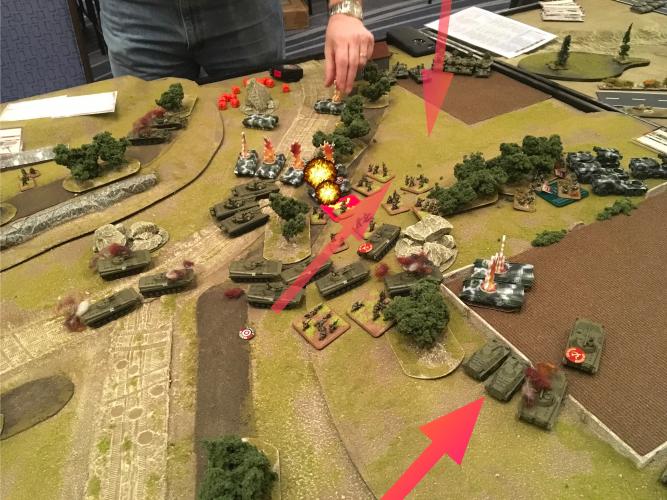 Soviet infantry assault Von Stein’s infantry while Soviet reinforcements arrive supporting Iron Tom’s horde. Hauptmann Von Stein is left to wonder what became of the reinforcements he had been requesting, but never arrived. 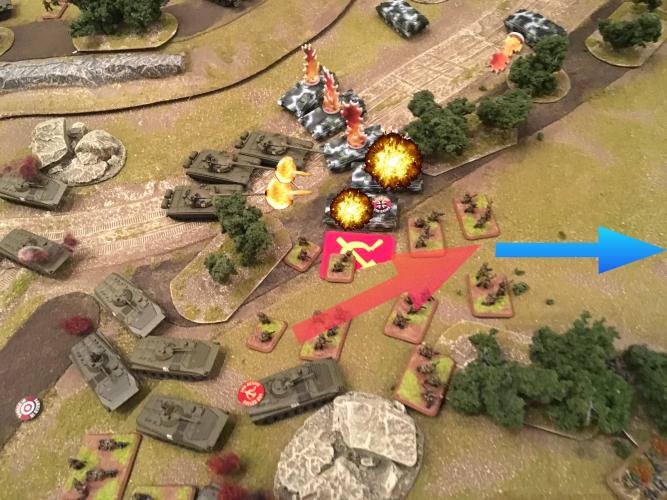 Soviet T-72s finish off the Marders while the West German Panzergrenadiers fall back from the Russian infantry assault. Hauptmann Von Stein orders a tactical withdraw, pulling all remaining West German forces from the field.

This was my first game in the Adepticon Team Yankee tournament. I lucked out and played against NDNG_Iron_Tom, a fantastic opponent playing a Soviet horde list. Adepticon provided outstanding tables and terrain for the tournament. We were issued the Dust Up scenario, and Iron_Tom played his list aggressively selecting the table quarter concealing a large percentage of his horde from initial view of my West Germans. What progressed over the next couple of turns was Iron_Tom slow rolling onto my defending West Germans.

My dice rolling was abysmal, to a point where even Iron_Tom started feeling sorry for me. That being the case, I can’t blame the loss on the dice. I got too anxious, seeing the BMP and T-72s massed together, and rather than using the minelets from the LARS on my first turn, attempted a bombardment, which destroyed nothing.

In attempt to further flank the Soviets (and not being aware of the rear armor value on the T-72s), I advanced the Luchs and Marders in what turned out to be the wrong direction. They would have done much better engaging the BMPs advancing on my left flank.

Never having any of my reserves arrive on the table hurt more and more as the game progressed, and in the end, I couldn’t dish out enough damage to counter Iron_Tom’s horde. It was a great game during which I learned a lot.