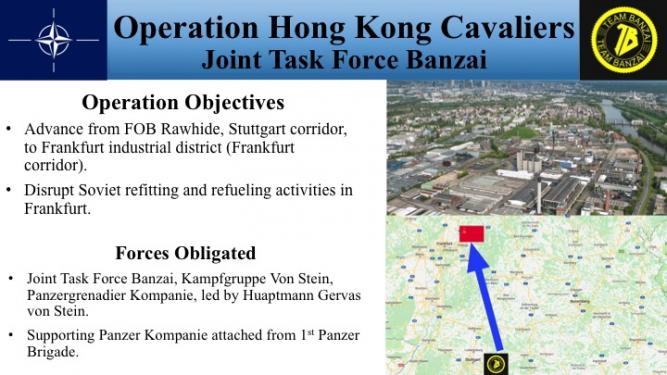 SUMMARY: (S) Joint Task Force Banzai has ordered Kampfgruppe Von Stein into the Frankfurt corridor to conduct a quick strike against an industrial region being used for refueling and refitting for Soviet divisions.

DETAILS: (S) With the successful conclusion of Operation Planet 10, Kampfgruppe Von Stein returned to FOB Rawhide in the Stuttgart corridor.

(S) Engagement between Soviet 57th Guard Motor Rifle Kompanie and Kampfgruppe Von Stein is photo-documented below along with the Operation briefing. 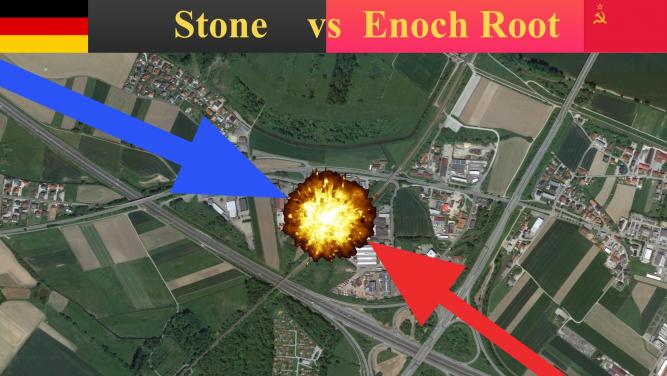 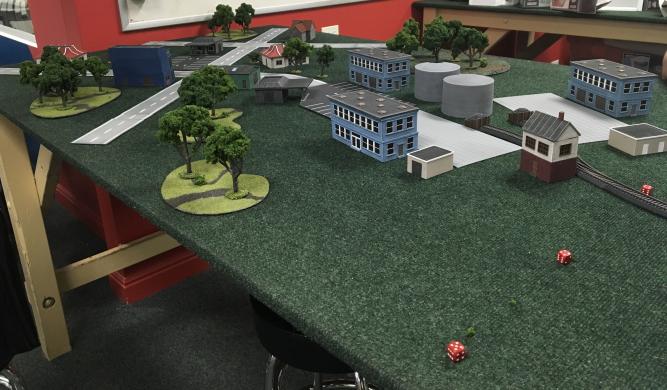 View of the West German right side of the battlefield. 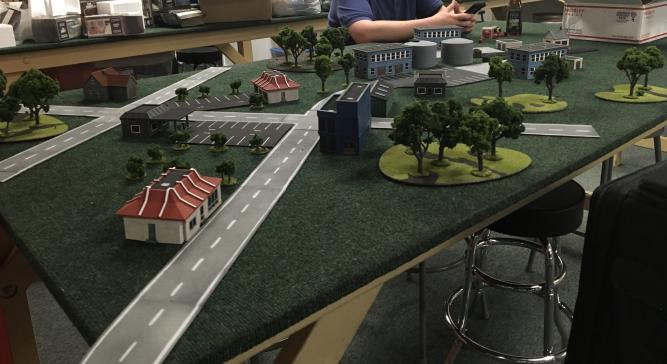 Aerial surveillance of the West German left side of the battlefield. 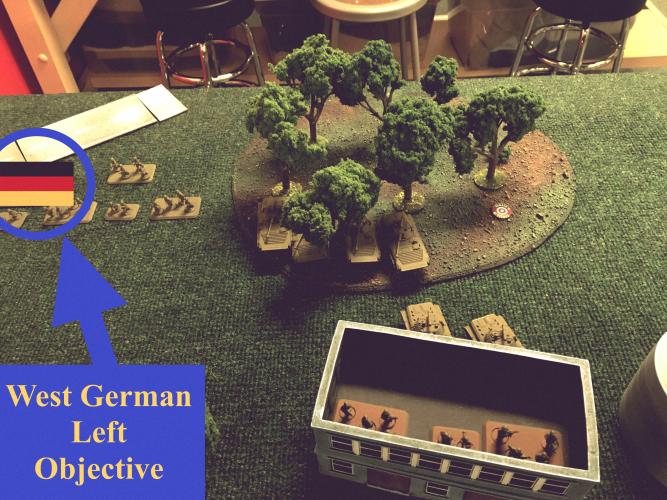 Under the cover of darkness, the Soviet infantry occupy a warehouse and dig in around the objective. 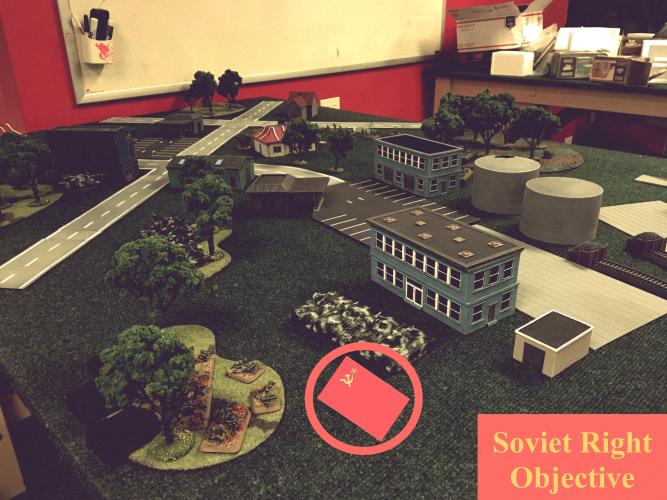 Kampfgruppe Von Stein's infantry occupy the woods next to the Soviet objective and situate a unit of Gepards in the woods in the middle of the industrial complex. 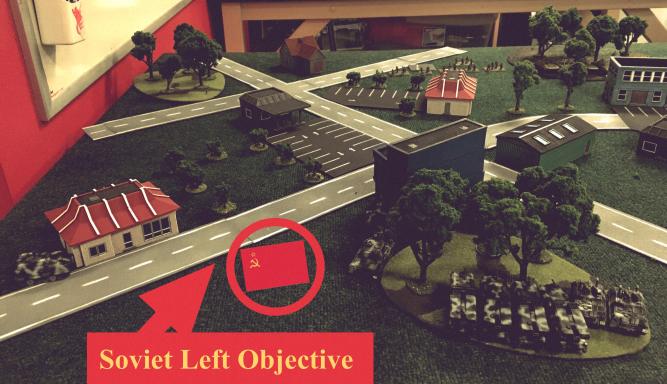 West German LARS and Jaguars take up a concealed position deep in the woods next to the second Soviet objective.

Initial exchanges in the dark 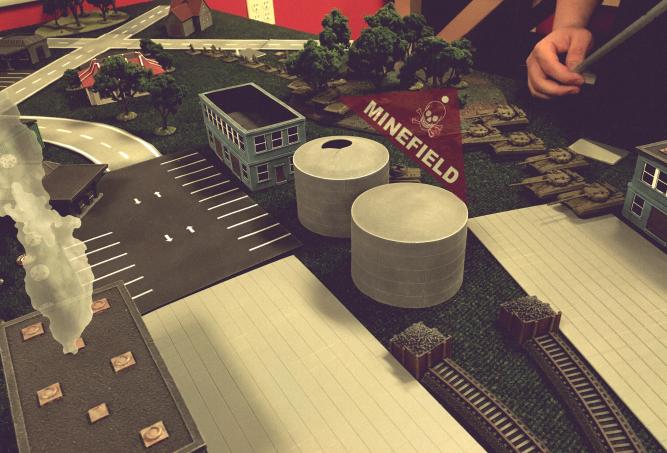 Soviet T-64s initiate combat, using advanced night vision equipment (called eyes) and pick off two of the West German Gepards straight away. To rectify this occurring again, Von Stein's Panzermorsers lay down a barrage of smoke in front of the Gepards and an advancing unit of Marders. West German LARs lay down a field of mine lets in the Soviet deployment zone. 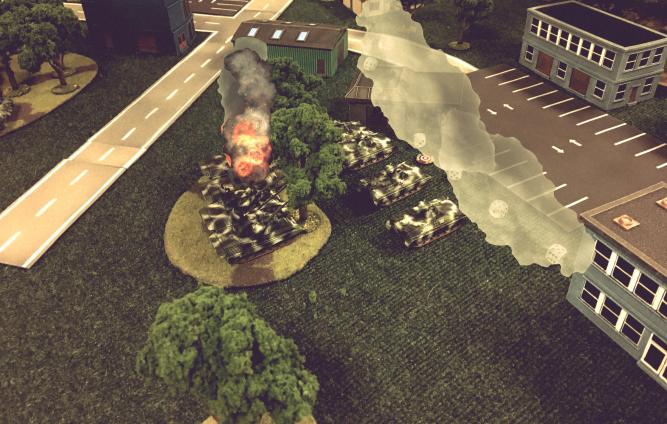 After the destruction of the two Gepards, a field of smoke is ordered to be laid down by Hauptmann Von Stein. An ounce of prevention would have been worth a pound of cure in this instance, but oh well. 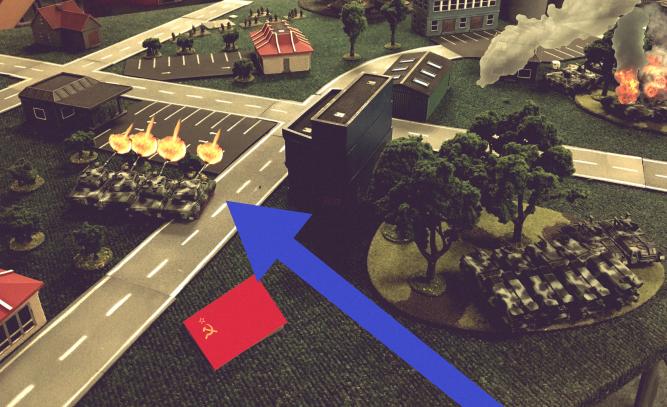 Von Stein's Leopard 1s use the night to advance forward and open a volley on the dug in Soviet infantry resulting in a total number of casualties equaling zero.

The soviets rush in 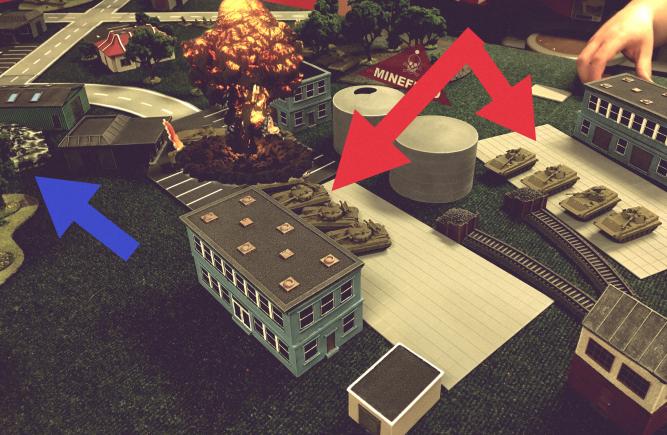 Soviet T-64s and BMPs push forward towards the West German right objective. Kampfgruppe Von Stein's LARs range in on the mass of armor, destroying one T-64 and one BMP. 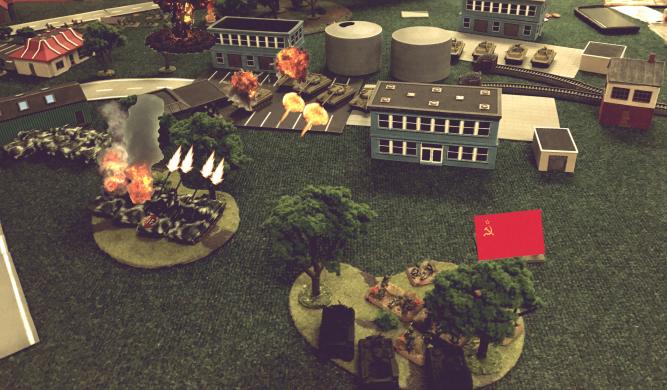 Soviet T-64 platoon opens up on the concealed Gepards, bailing one of the AA batterie. Von Stein’s Panzermorsers launch a barrage on the dug in Soviet infantry and hidden BMPs, destroying one of the BMPs. 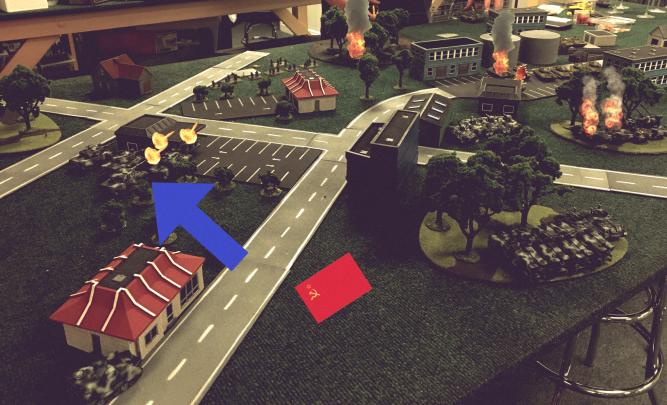 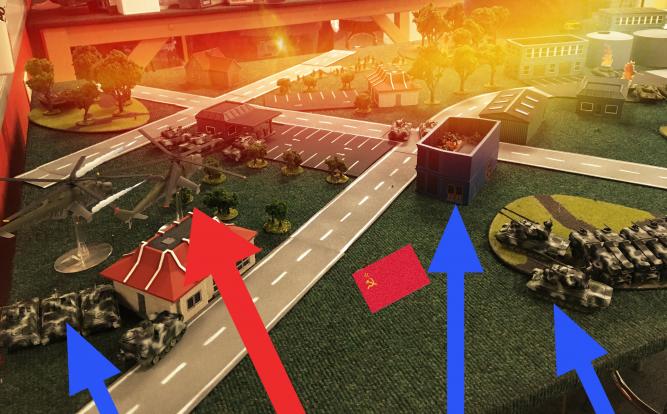 As day light breaks in Frankfurt, the Soviet commander requests air support, resulting in a flock of Hinds arriving. The Hinds immediately take aim at the Leopard 1s, bailing one of the tanks. For once, Hauptmann Von Stein's request for reinforcements is heard, and a second platoon of Gepards and Panzergrenadiers arrive to provide support. 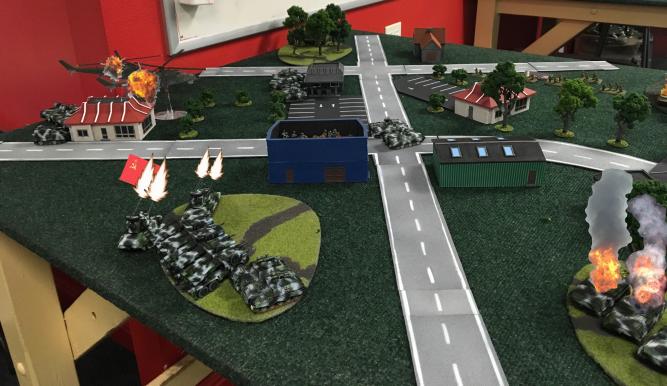 The West German Gepards lob a volley of AA at the Hinds, crashing two of the big birds. 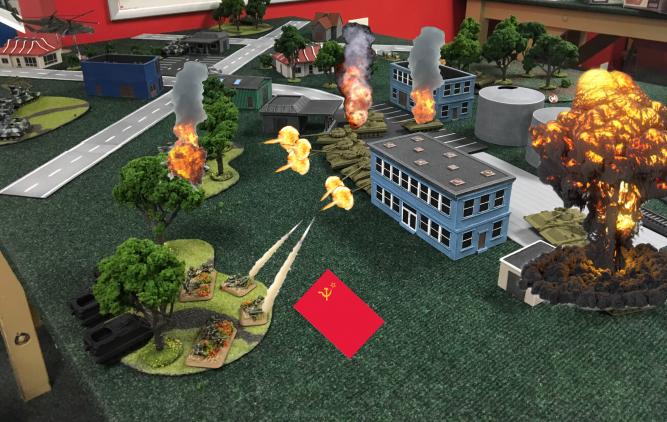 The Soviet T-64s and BMPs continue their advance towards, the objective, finishing the first platoon of Gepards as they move. The Panzergrenadier Milans have no effect on the T-64s, but the West German LARS do manage to destroy a BMP in a barrage of missiles. 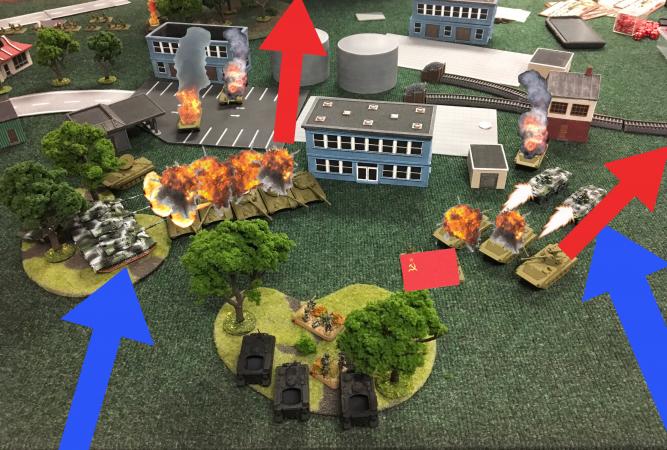 Arriving just in the nick of time, as all cavalry should, the West German's second platoon of Leopard 1s and a platoon of Luchs arrive, and flank the Soviet T-64s and BMPs. The Luchs immediately dispatch the platoon of BMPS, while the Leopard 1s destroy four of the five remaining T-64s, forcing the remaining tanker to vacate the vicinity. 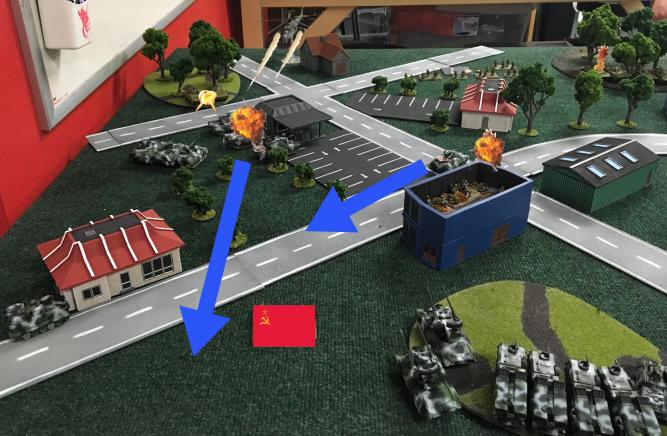 With infantry from both sides fully securing the objectives, the battle comes down to attrition. The remaining Soviet Hind, accompanied by an arriving unit of BMPs, destroy one of the Leopard 1 platoons. A separate hidden BMP platoon fires from the woods demolishing the unit of Marders holding the crossroads. 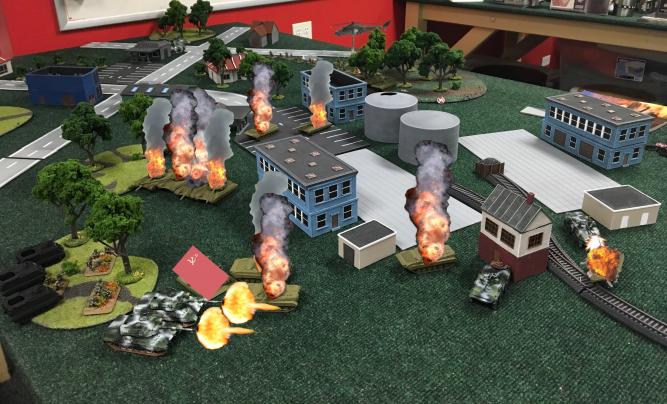 The Soviet command BMP advances from cover, attempting to destroy the West German Luchs platoon, but is subsequently destroyed by the combined arms of the Luchs and Leopard 1 platoon. 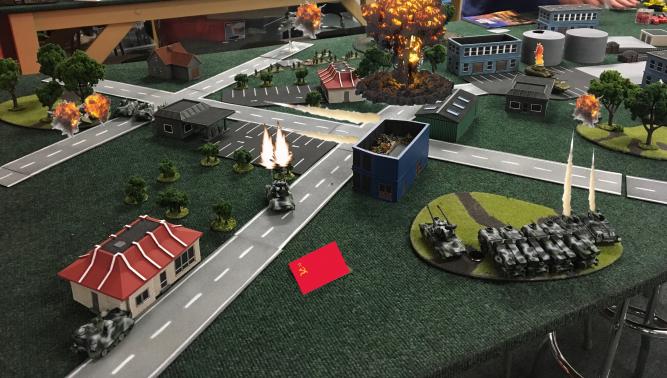 In a final volley, Von Stein's Gepards takes down the remaining Soviet Hind, while the unit of Marders and Panzergrenadier Milans take out a platoon of hidden BMPs. The Jaguars remove the last remaining BMP from a separate unit, while the LARS take aim, and bombard the last BMP on the table. With all armor destroyed, the Soviet commander retreats his remaining infantry from the battlefield, leaving the industrial complex under Joint Task Force Banzai control.

Wow, what a way to end things. This was actually my next to last battle of the campaign, but by far one of the most intense. The game devolved into an unintended war of attrition. The only real reason I won out in the end was due to luck and timing on the arrival of my reserves. Enoch Root had me on the ropes for almost all of the game with the exception of the last turn or two. What saved me was the arrival of my Leopard 1s from reserve, which flanked his T-64s and the arrival of my second group of Gepards, which took down his Hinds.

I decided, for this game, to try out two different batteries of artillery, the LARs and the Panzermorsers. They were not nearly as effective as I had hoped, but I kind of knew this going in. That being the case, this was my first time using Panzermorsers, and I was actually very impressed by their capabilities. I’m going to have to use them more going forward.

Things for me to keep in mind for my future games is to not lose sight of the objectives. At the beginning of the game Enoch Root had all of his armor on the right objective, and infantry on the left. My goal, initially, was to focus on whittling down the infantry to open the left objective. I became so focused on this goal, I forgot about the second objective and didn’t notice it was unguarded during the last two turns. As Enoch Root pointed out, if I had run my Luchs up there I could have brought the game to a conclusion much earlier.

All in all, a very intense and fun game.