I played a battle against a relative of mine, who does not get to play very often. We played the Hof Corridor Hasty Attack with NATO getting Immediate Scattered Reserves, I know the typo in the mission itself.
“Guns Up!”: Using artillery off board and to simulate that artillery moves after firing and is not always available for your company. Regimental/Battalion artillery is available on a 3+ (Jump Jet Rule), and all other artillery are available on a 4+ (Strike Aircraft Rule) 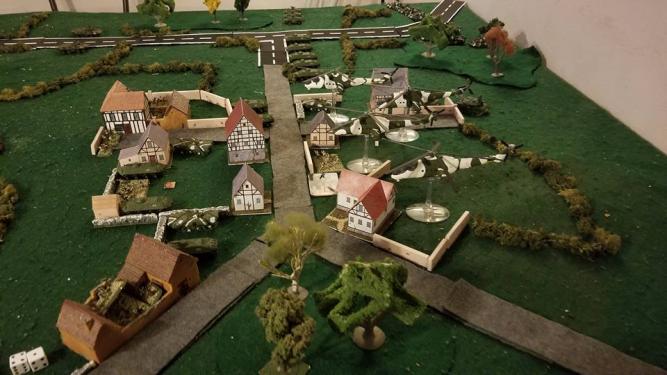 It was a cold morning in the Hof Corridor, Jakob Schultz was rising from bed when a courier came to him. “Here are your new orders, sir.” The orders told him to push through the corridor and finally cut off NATO supply lines.
Jakob ordered his subordinates to get the men up and start checking the vehicles, they would move out in an hour. He was to attack down Route 9 and force the enemy back. “Today,” he told his men, “is the day we bring the fight back to the enemy. They have bested us time and time again, but today is not that day. Today, we fight for Germany, we fight for our mothers, brothers, fathers, and sisters. Today we take back Germany for them.” He jumped into his BTR to a thunderous applause. Today he was going to show the enemy he was someone not to be trifled with.
Traveling down Rte 9, Schultz sees a small village. He says to himself that this would be a good place for the men to take a rest for a bit. He had been driving them hard the last few hours and he knew they needed a rest. His men pulled into town and dismounted from their vehicles. He himself even went into a local pub for a drink. Then out of nowhere he hears shots ring out from the south. 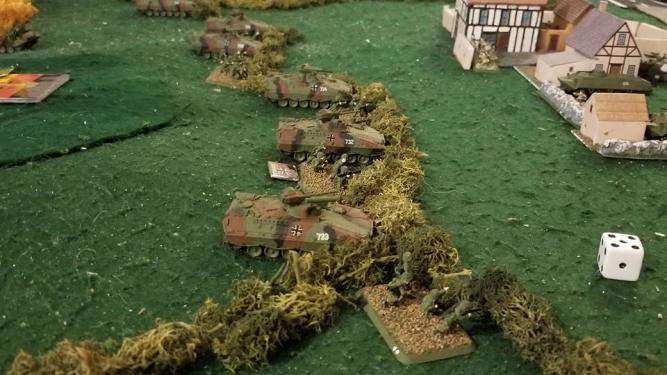 The enemy had anticipated their move. Even though he was caught somewhat unawares, Schultz quickly adjusted. He told his men to hunker down in the town and wait out the fire storm. Meanwhile he told his new tank commander Leutnant Zeller to push south along right flank, with Leutnant Klaus and his Spandrels in support. At this point he did not know how many of the enemy were out there, but he knew that there were quite a few.
“Tank 3 is down, there is no one left,” one of Zeller’s tanks commented. “They appear to be fellow Germans.” At this point Schultz knew he would have his hands full. “Enemy tank destroyers in the west woods.” Zeller ordered his men to fire toward the smoke trails. All of the remaining tanks fired and Schultz could see at least one plume of smoke. 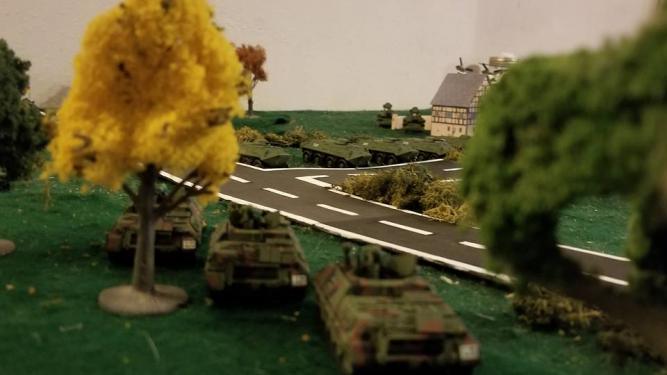 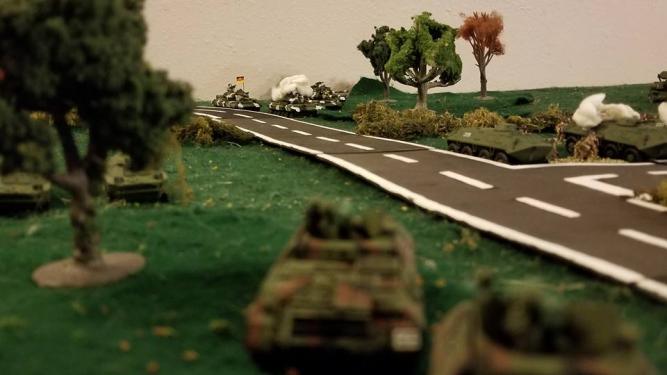 And claim their first victim

His helos were still overhead, not seeing any targets of opportunity. Then without any warning they were under AAA fire. They were able to dodge most of the fire, but one was not so lucky. He came hurldeling to earth and crashed hard into the back yard of a house. Then he noticed to of his BTR’s go up in smoke, they have a lot of AT weaponry, he thought.
“The enemy is coming!!” Muhler yelled. The enemy had unleashed a barrage of artillery and a hail of small arms fire and were starting to push the extreme left of the line. They moved over open ground and managed to take out another BTR and killed some of Muhler’s men. Fortunately, his men were able to hold and push the enemy back from the town and back to their original positions. By this time the enemy had brought up another platoon of infantry from the SE and allied tanks from the SW along Route 9. 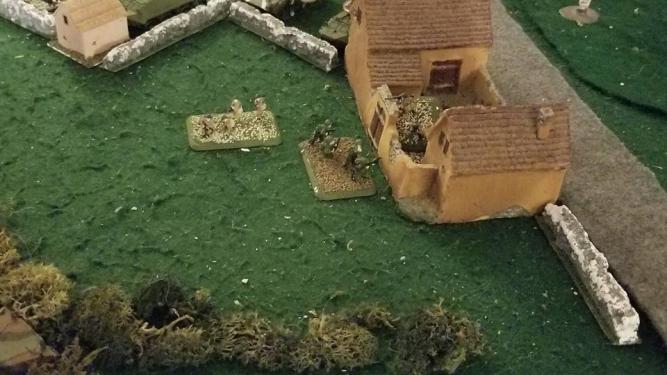 Enemy helos opened fire on von Stueben’s company, and knocked out 2 of his BTR’s, dismounting his infantry. Seeing that these made a huge target, von Stueben ordered his men to dismount and move forward toward the center hill. On his right flank, Zeller moved up with his tanks, not seeing the enemy tanks until it was too late.
“American tanks, direct front, 500 meters.” Schultz looked through his binos and he saw American M60 tanks. Not as bad as the Abrams, but still a threat. Zeller’s tanks moved into position to take on the American tanks. Just then Schultz sees 3 of Zeller’s tanks go up in smoke, then 2 more. In the distance he can see a lone tank start leaving the field, he could only hope that it was Zeller. Schultz was tire of losing tank commanders, it was as if the enemy commanders specifically targeted them. He had lost two brave commanders, he could not stand to lose a third. 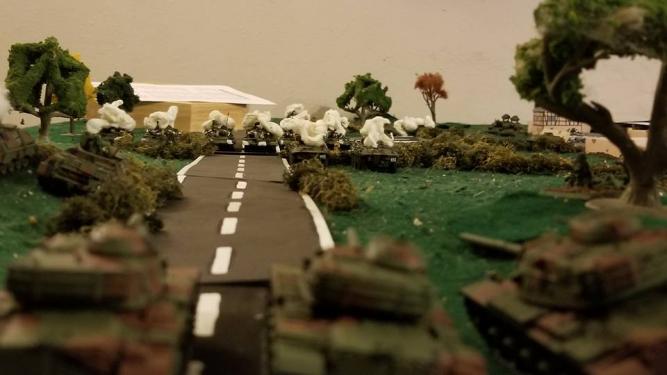 M60's strike with a fury

With his tanks gone and the enemy still in good spirits and fighting hard, Schultz came up with one last plan. His AAA opened up, Gremlins and Shilkas fired at the enemy helos that were lurking behind the far south woods. Amongst the hail of bullets and missiles, he could see 3 helos crash to the ground. But that was not before the enemies AAA had taken two more of his. The last remaining Hind managed to kill one of the M60 tanks before peeling off.
Schultz targeted the entire wood line with artillery and rockets to pin the enemy’s heads into their foxholes. Then he ordered both von Steuben and Muhler to attack. All-out attack along the line, the enemy couldn’t with stand it. One of the enemy platoons ran before his men reached them. Seeing the opportunity, Muhler rushed the southeast hill to seize it from the enemy. Von Stueben pushed onto the center hill and amongst a hail of fire, was able to get to the crest of the hill and push the enemy to the back side, not quite taking the objective. 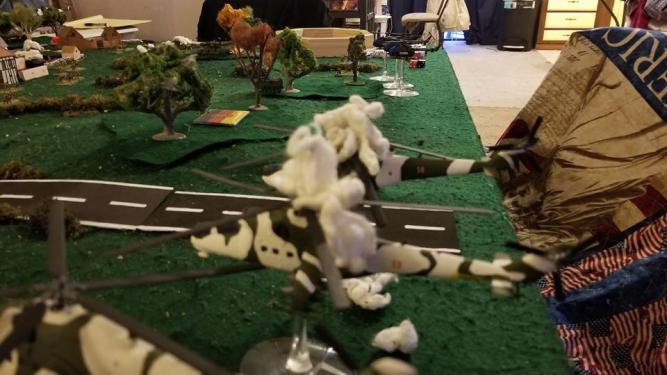 Germans are good at hunting turkey 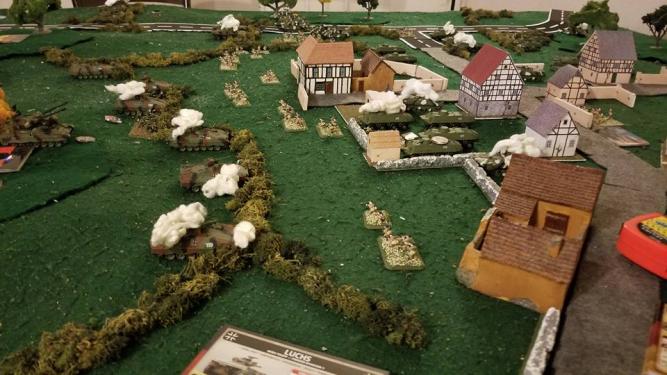 As Muhler approached the hill, he could see that the only thing that was defending it was two Gebhard AA vehicles. “We can take them!” he told his men. They were beaten up, but still had the fury of a honey badger. They assaulted the AAA on the hill with minimal loss and pushed through the woods to secure the objective. He just then realized that he outran his machinegun support, luckily the two remaining BTR’s from his company were there, it wasn’t all he wanted but it would do. As he was setting up his defense, Muhler’s men came under fire from a fresh infantry platoon trying to retake the hill. Schultz didn’t know how it happened, but they were able to withstand the fire and return the fire. 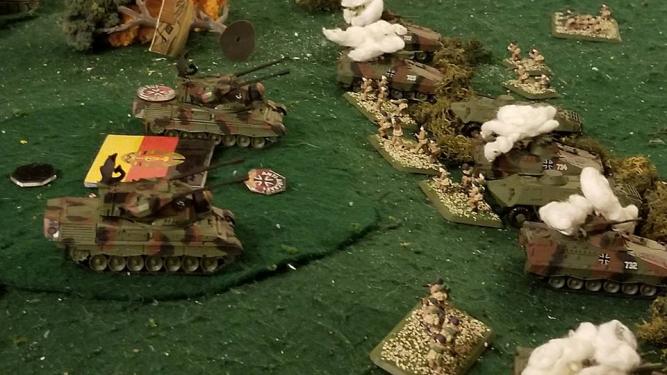 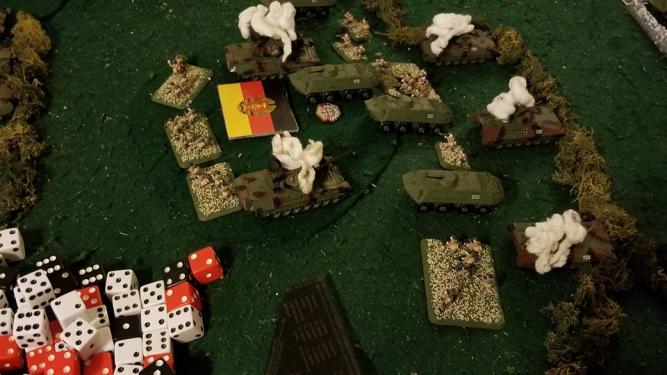 Taking of the SE hill

Von Steuben’s men had not quite taken the objective, and now were under attack not only from infantry, but tanks as well. The enemy put what seemed like tons of munitions onto the hill, but somehow they held. His men were shaken but held. Then, von Stueben looks up and sees two tanks appear at the western crest of the hill, and what was left of the infantry appear from the southern crest, he was getting hit from two sides. Schultz could see this engagement from his position in the town, and was worried he was about to lose the hill. It was as if God had taken their side and he could see that von Stueben’s men had not only defended against it, but had taken out a tank, and routed the enemy infantry.
Schultz had taken the field, though with heavy casualties. He had forced his enemy back, but was sad that he had to take fellow German lives to try and cut off supplies. Even though his men were exhausted, he could still see that their morale was up, this was the victory they needed. 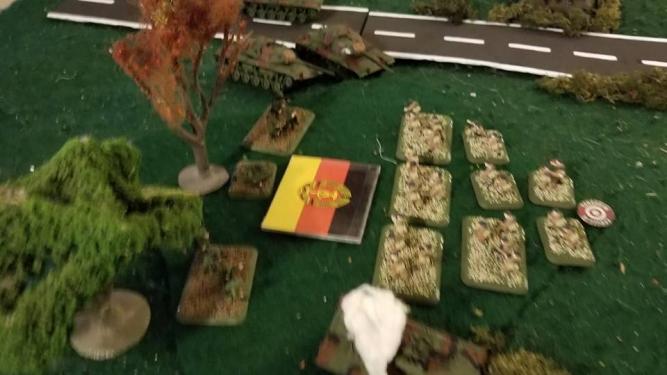 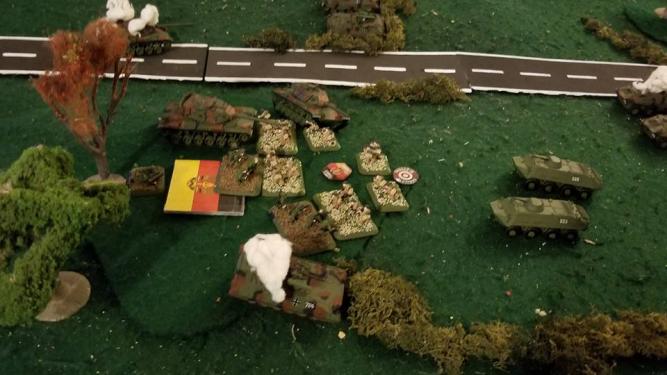 Von Steuben fends off the attack