Colonel Schmidt woke to the sound of reveille being played. To him it was how his mornings always began. Schmidt had joined the army when he was 16 years old. He first had enlisted and slowly worked his way up the line. Shortly he was offered a spot at the officer’s academy and he jumped on it. He was always fascinated with the cavalry since he was a young boy growing up on a farm. Though horses were out in the modern army, he still knew that’s what he wanted to do.

Looking out the window of a two-story house, Schmidt looked upon his battalion. The early morning dew made the tanks glisten, and you could see the steam rise off as it began to warm up. A knock at his door shook him back into reality. “Herr Colonel, we have orders.” His adjutant handed him a folded piece of paper. As he opened it, he could see the seal of the high command. He let out a disappointing sigh. The orders told him that the Americans in the area are beginning another offensive. Unknown where it was at, he would have to wait for orders to attack, but needed to get his men ready. 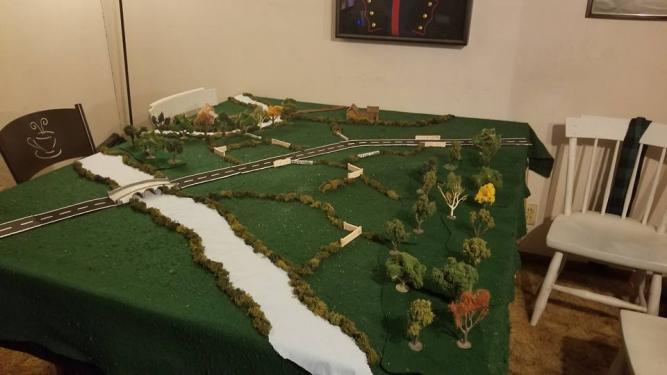 He pulled out his map and studied the terrain. He could see a nice open area for his tanks, that could make a perfect kill box for the enemy, if he could get there in time. The area was on a bend in the Elbe just north of Vockerode. There was a bridge, a natural choke point and on either side of the fields were woods, perfect spots to deploy ambushes on the enemy. “Oberfeldwebel, gather the men and tell them we are moving on Vockerode. Also, get me in touch with any infantry commanders near there, we will need their support.”

His aide told him that the only infantry commander in the area was Col. Schultz, and his battalion was understrength. Just my luck, Schmidt told himself, but no matter we go with what we have. Schmidt got on the radio to Schultz.

“Schultz, this is Schmidt of 8 Panzer Battalion, do you read?”
“This is Schultz, go ahead.”
“My battalion is headed your way, I need you to deploy your men in the fields just north of the Elbe at Vockerode. Far enough back to draw the enemy in so we can hit them in the flank. How copy?”
“Roger, will deploy in that area and hold until you get here.”
“Understood, I will send my infantry company, commanded by Capt. Schumacher to bolster your ranks. Schmidt out.”

With that now out of the way he got his men into there tanks and headed to Vockerode. As he was climbing into his T-55AM2, he could hear the rumble of the engines and could only think, I hope this works. 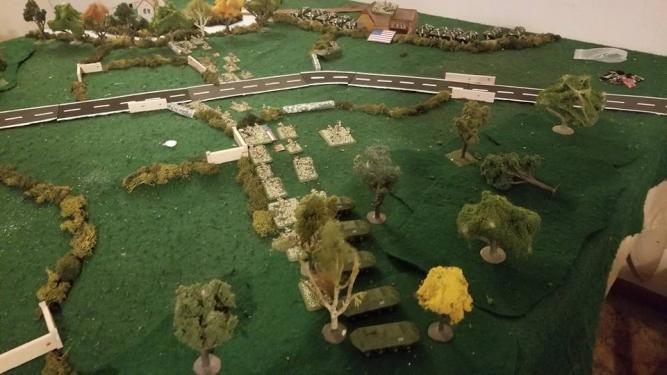 Colonel Schultz was relatively new at commanding a battalion. He had seen his fare share of combat, but mostly as a platoon and company commander. He was unsure that his understrength battalion could hold out against an American attack. His fears were somewhat alleviated by the arrival of Schumacher’s company, but he still had his doubts.

Schultz took his battalion and deployed them the best he knew how. He sent his first company to the east along a hedge/fence row that overlooked Route 9. His second company was deployed the west along another fence line and over a small tributary that surrounded a small farm. He put Schumacher’s company to the north along another hedge row near another small farm. He told all his commanders to keep small and let the enemy in.

Schultz radioed back to Schmidt and told him he was in position and awaiting his armor. As he hung up the receiver, he could hear the wine of tank engines. Just from the sound of them her knew they were American, and they were Abrams tanks at that. He knew he was in for a tough fight. 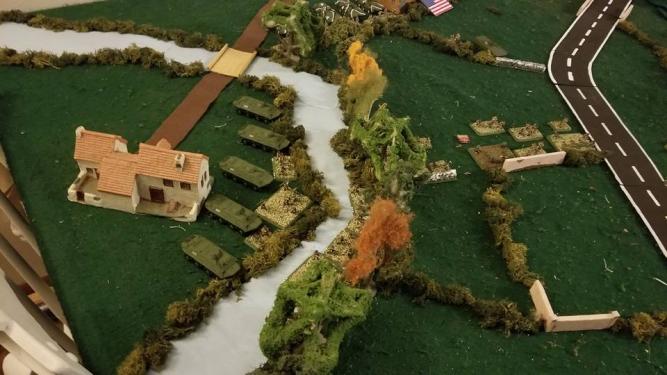 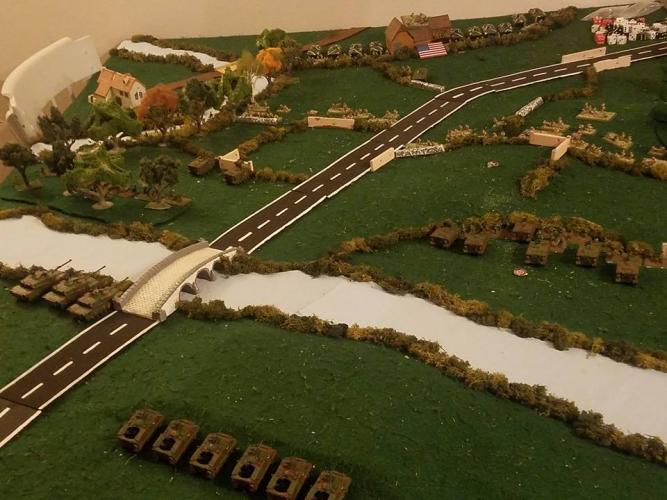 His men waited patiently, and he could see the Americans moving fast over the bridge. He could see two scout sections that were both followed by infantry, both mounted and dismounted. One section deployed west, and the other east. The fight was on.

Small arms fire range out all along the line. Schultz’s radio was live with traffic of his officers trying to locate the fire. Over the sound of the radio he heard the loud boom of a main gun, the tanks had arrived on the field, and they were not his. Looking through his binoculars he could see three enemy tanks on the south side of the river providing fire support. He needed them to move over the bridge, so he could spring his ambush. They were not cooperating.

Schultz could hear the rumble of artillery, he looked and could see Capt. Muller’s company to the east taking a beating from it. He could hear the call for CASEVAC over the radio, men were being killed and wounded. “Muller, I need you to hold your position.” Schultz told him over the radio. “Sir, we can, just a few mortar rounds, nothing we can’t handle.” Schultz was relieved to hear that, he was lucky to have such a confident company commander.

Meanwhile on the other end of the field he could see that Weber’s company had begun to engage the other enemy infantry. His losses were minimal compared to Muller’s and he was holding despite losing two of his BTR’s to AT fire. So, to return the favor, Weber called in the regimental guns to take care of the threat. They landed, but to no avail. The cannoneers must not have put fuses on the rounds, because there was no effect anywhere.

Schultz could hear the whizzing of rockets overhead and was glad to hear it. His men were taking a beating. Seeing the impacts on the eastern flank, he could only assume Muller was in trouble. That thought was solidified when he could see artillery impacts in the same area. He feared that Muller’s men were about to run. His fears were coming true.

“Muller, SitRep, over.” Schultz called over the radio.
“We are taking a beating, but we are holding. The enemy is not moving, just sitting there in the other hedge. Ammo is good, but were could use a CASEVAC, I have a lot of wounded here.”
“Roger that, I will send it when I can. Shultz out.” 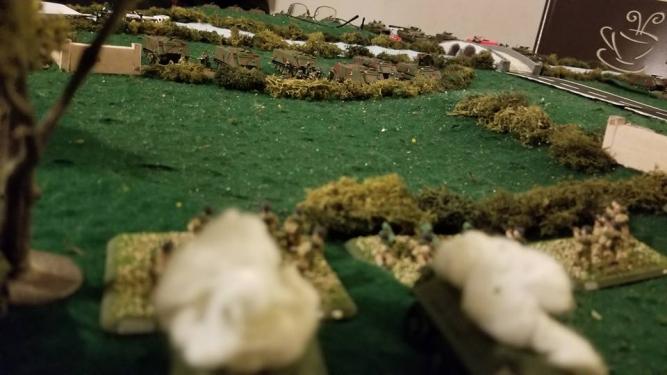 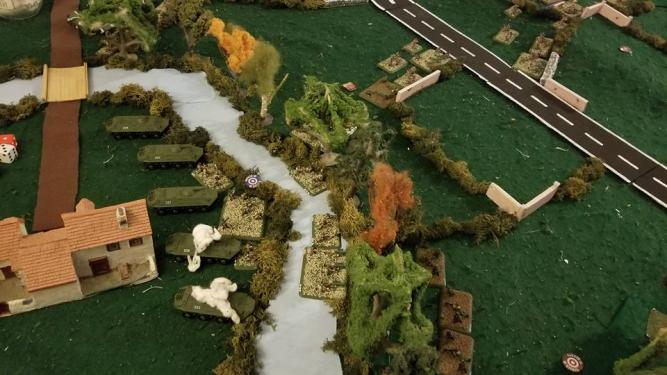 Knowing that Muller was not wavering helped calm his nerves. He could feel his heart racing in his chest and the sun began to get brighter as the battle ensued. This was feeling that he had never felt, he was becoming overwhelmed with emotion.

“They are moving to our right, they are coming down the waterway!” One of Weber’s platoon leaders called over the radio. The enemy had flanked Weber, this is not good, Schultz thought. He needs to pull back. Pull him back. Schultz had lost perspective, and began to run his battalion like a company, telling his commanders what they needed to do. He was panicking.

“Weber, fall back and reestablish your lines.”
“Sir, it was just a fire team that crossed, we have it handled.”
“Weber, I say again, fall back and reestablish your lines further north.”
“Yes, sir”, Weber reluctantly said over the radio. Through the trees Schultz could see Weber pulling back. His infantry mounting up in what BTR’s were left and heading north. There, Shultz thought, I have flank secured again. 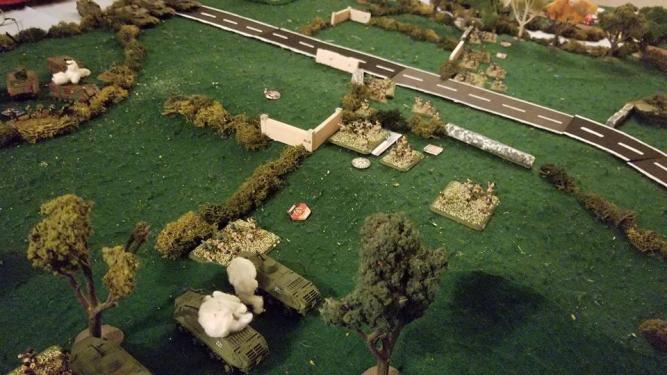 Muller is taking a pounding.

“We need help, we are not going to be able to hold much longer. Send reinforcements!!” Muller was wavering, his unit had lost almost half if not more of it men. “Schumacher, mount up and go relieve Muller.” Schumacher ordered his men to their tracks and headed toward Muller. Just about that time, he could hear the scream of jet engines overhead. Air support had arrived.

Schultz looked out and saw that the Abrams had crossed the river. That was their target. He could see streaks of smoke from anti-air missiles, then a loud explosion. The enemy had shot down one of the planes. The surviving SU-25 managed to avoid the AAA and launch a missile. It hit its target and the back of the turret blew off and flames cam out of the top of it. It was a kill, one down, six more to go. “I hope Schmidt gets here soon.” Schultz said in a low tone. 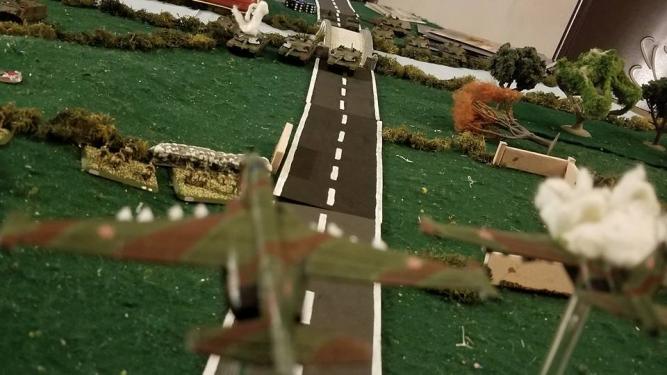 Frogfoot's line up for attack 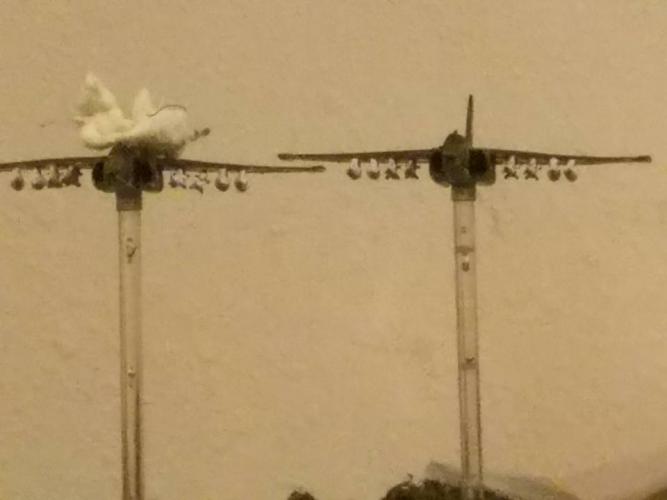 Just as he said that, Schmidt’s first tanks arrived. As soon as they arrived he ordered them to replace Schumacher and cover the farm. They acknowledged the order and headed that way. As they moved just behind the hedge, Schultz could see seven tanks go up in smoke. He could see a few turrets come off and they appeared like lollypops flying. 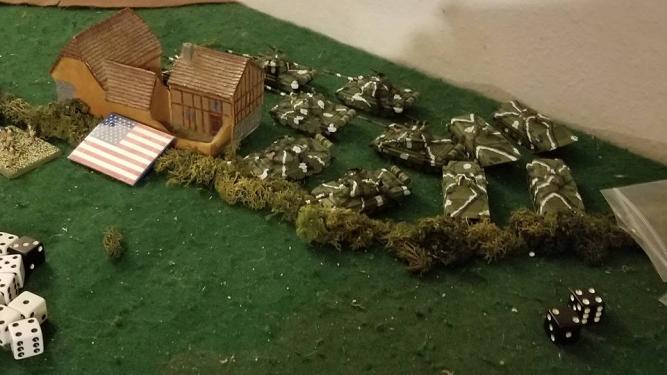 Kruger arrives and moves into position 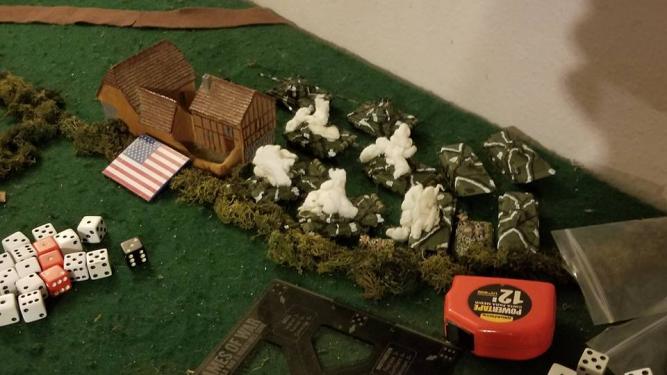 Over the sound of the explosions, the thump, thump, of the rotors could be heard. Capt. Wrenn’s Hinds had showed up. They lined up to attack the Abrams crossing the bridge. A hail of anti-aircraft fire came at them. He could see one of the helo’s come crashing down, its rotor flying in the opposite direction. The three surviving Hinds fired their missiles, but to no effect, they bounced off. Another round of AAA came through the air, aimed at the Hinds. All missiles struck their targets, the remaining Hinds exploded on impact and crashed to earth. 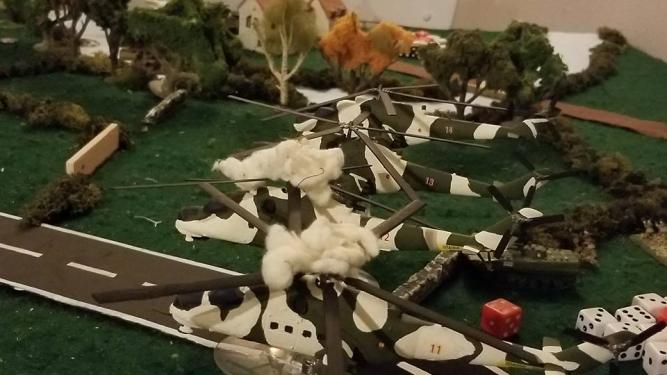 Capt. Kruger, the T-55 commander that had just arrived radioed to Schultz, they have AT weapons near the west farm. That is when he realized that Weber had left the field. Schultz was furious. That was not his order. Just then, Col. Schmidt arrived.

“Schultz, what the hell is going on?” Schmidt called over the radio.
“Sir, they have overwhelming superiority and are pushing.”
“I see that, you were supposed to hold, I see that has not happened. Schmidt to all units, pull back and reorganize. Do not continue to advance. Fall back to Coswig and set up a defense. All units respond.”
All units did respond, and the remaining forces left the field to set up a defense around Coswig.

Col. Schmidt had tried to contact Schultz after the battle to get an AAR of his events. He contacted the battalion he oversaw, but to no avail. He even inquired if he had been transferred to another command. He was given the runaround. He later found out that Schultz had been called back to Berlin and was reassigned to a garrison battalion and that he was unreachable where he was at. Schmidt knew what that meant, Schultz was not going to be heard from for a long time.