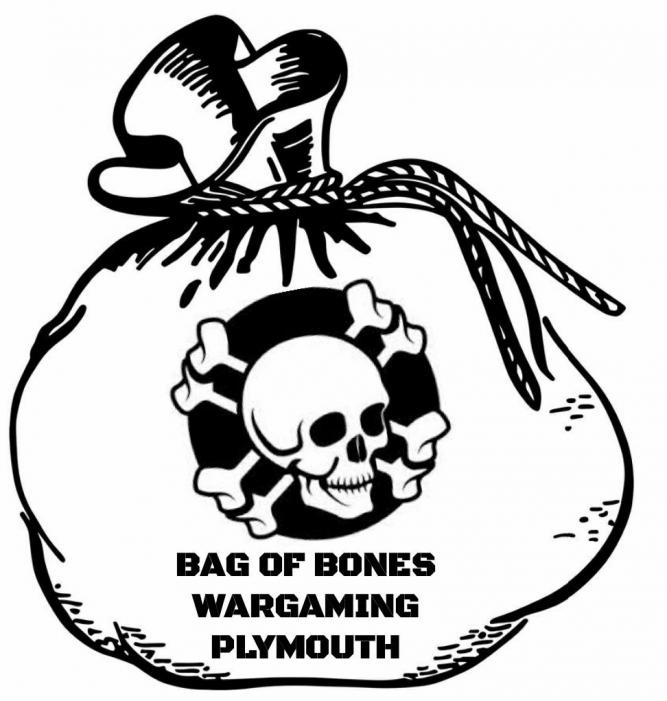 An office in the BAOR HQ, General Melchett (grandson to the famed WW1 General/hero/buffoon) is seen sitting behind his desk staring wistfully out of the nearby window. A loud KNOCK KNOCK sounds from the stout office door…. 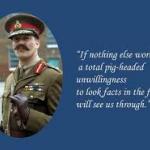 “Come in! Ah Major Slaptyback! Where the hell have you been? I’ve was expecting your report last Thursday! Well? Spit it out man!”

An extended pause filled the room. Major Slaptyback grinned at the General and was met by an expectant hand gesture....
"Yes, and what Slapty? I don't have all day!"

"Oh yes of course Sir. Sorry Sir. Right, so i was on my way and well the report Sir, its well, gone Sir"

"What do you mean gone?"

"Gone Sir, as in I have had the unfortunate pleasure of placing it somewhere and not remembering where it is."

"FOR CRYING OUT LOUD MAN!" bellowed the General "YOU MEAN TO TELL ME, YOU CONDUCT A TRAINING SERIAL AGAINST OUR NEW DETACHMENT OF WEST GERMAN ALLIES, AND THEN LOSE THE CHUFFING PAPERWORK TELLING ME HOW EFFECTIVE THEY ARE AT FIGHTING!?!"

General Melchett shook his head.
"Binglebert, i’ve come to regard you as a sort of son over these past few weeks. Not a favourite son, obviously; more an illegitimate backstairs kind of sprog, who nobody really likes. But even this is a bit off old boy."

An embarrassed looking Major stares into his boots...
"Yes sir"

"Well never mind. Can't be helped I suppose! At least their allies! Information shared is information greened and all that!"

"Greened Sir? Do you mean Gleened?"

So my old mate Vinehart and myself had a game last week and i've only just got round to writing it up. We played a 100pt game at HAMBURG and decided to play a bog standard Counterattack from the More Missions pack as we are both Allied Players.

My List is attached but here is a rundown of Vinehart's army for the battle: 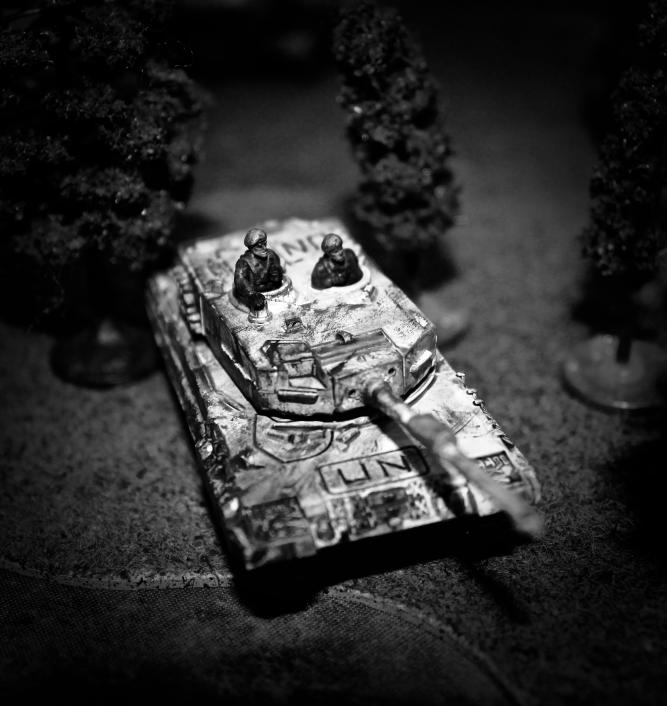 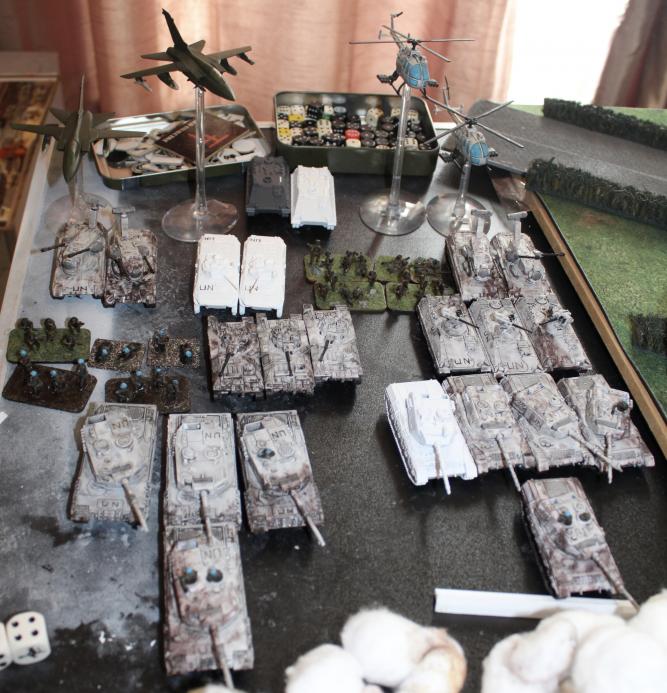 The West German 100 Points (using two planes for four though!) 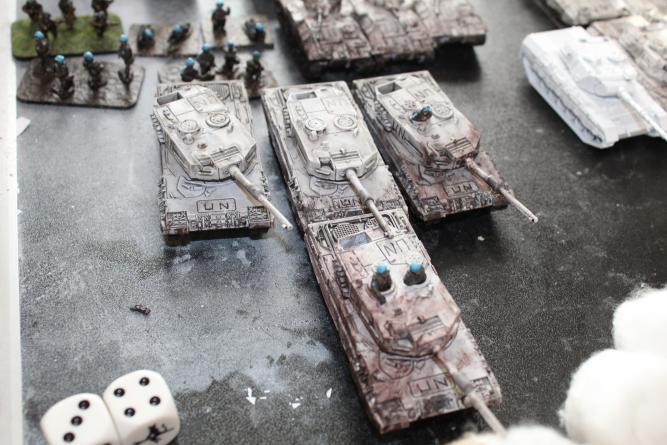 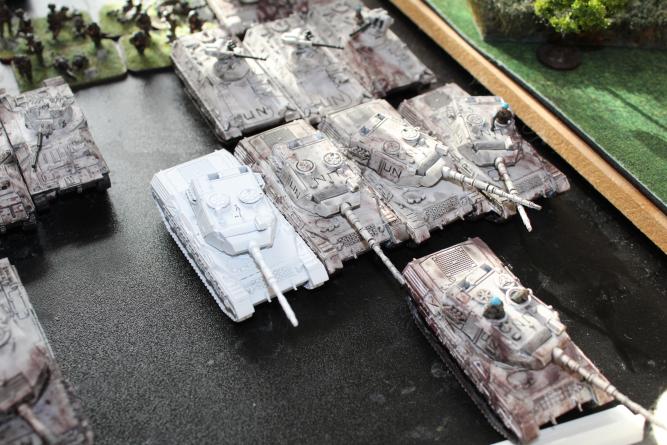 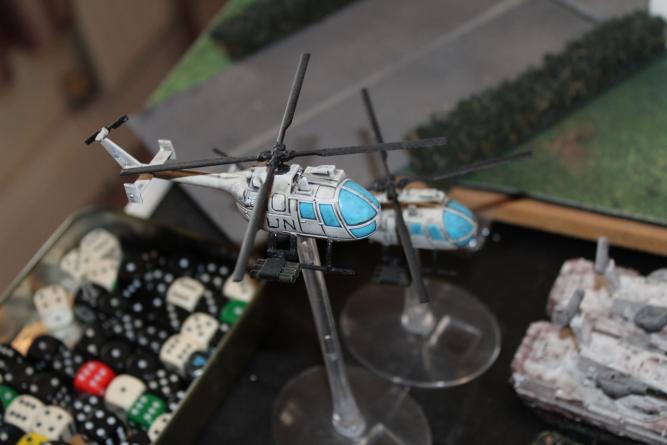 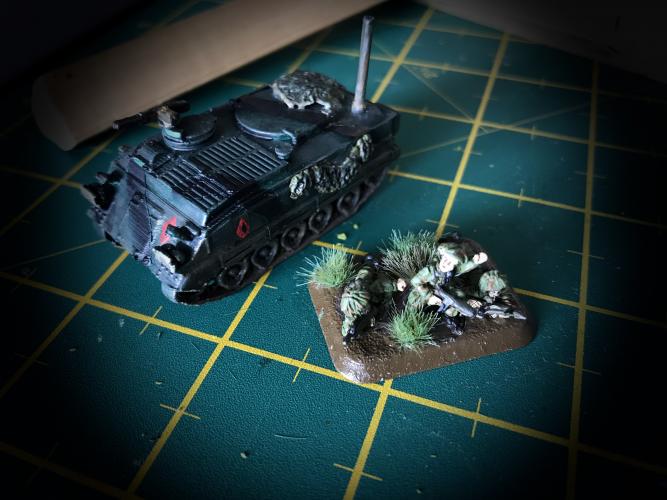 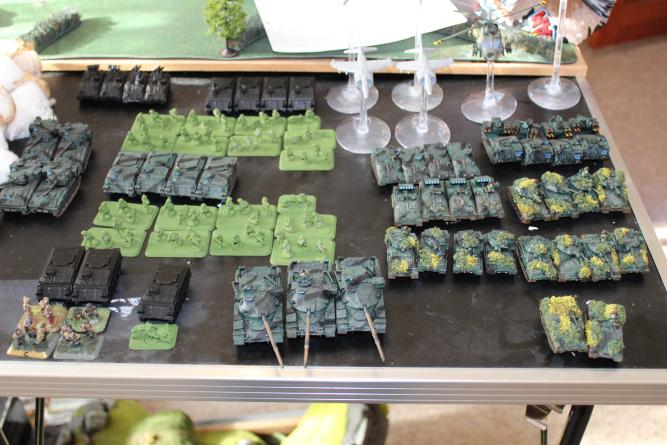 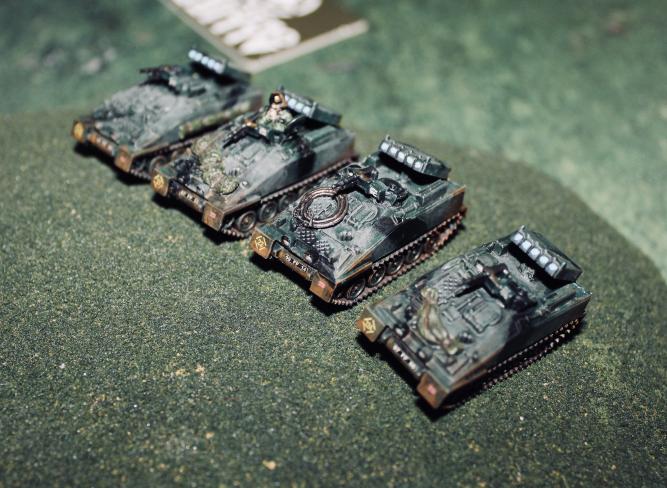 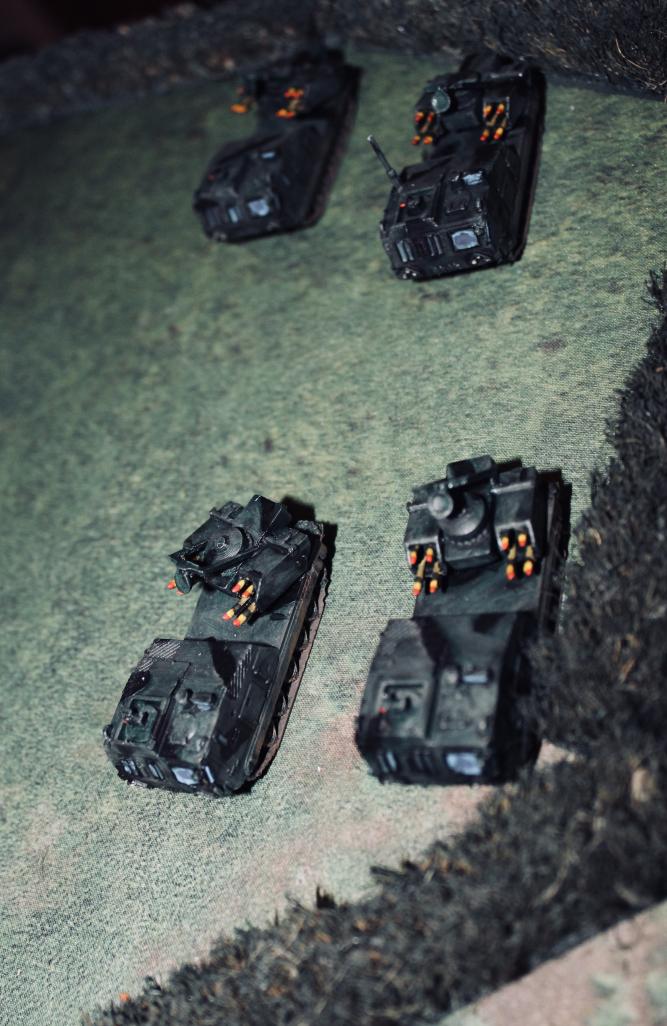 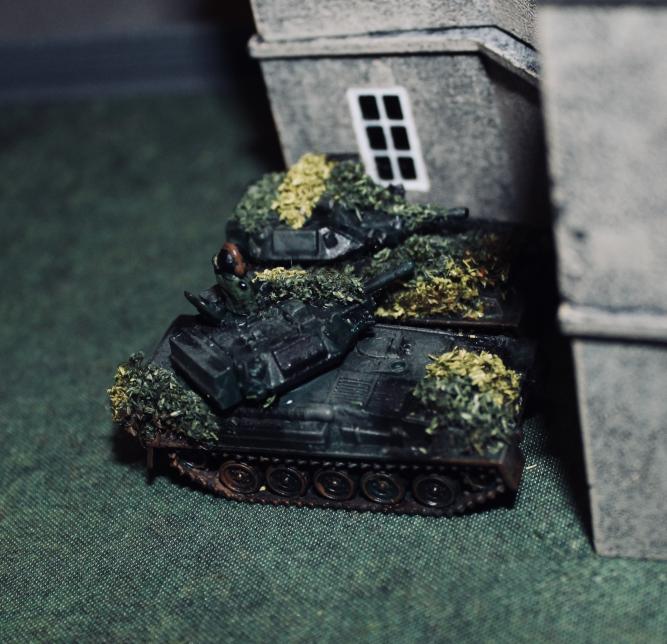 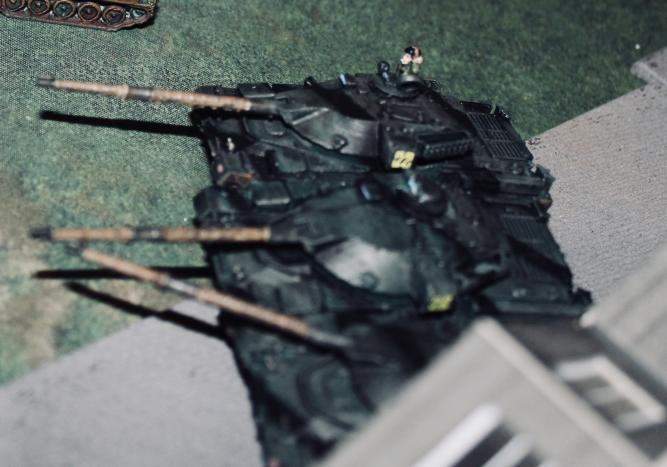 So all in all a very fun time was had by Vinehart and myself. Much Spearheading took place in the deployment phase with the West Germans blocking my original planned route of advance leaving me a very narrow route to follow for one objective but a relatively open one for the other. The downside was I was unable to win until turn six so careful planning had to be utilised.

Rather than go for my usual turn by turn account i've decided for my final Battle Report of the Firestorm Campaign with some highlights and then more importantly, my opinions on my list as I fell this can be more constructive for other players.

Vinehart pushed his LEO1 Platoon through the centre to try and knock out my Rapier platoon. This would leave the air a better place for his Tornado's should they arrive.

I definitely didn't expect this as it was against his normal style of play. Touché Hauptmann, touché. 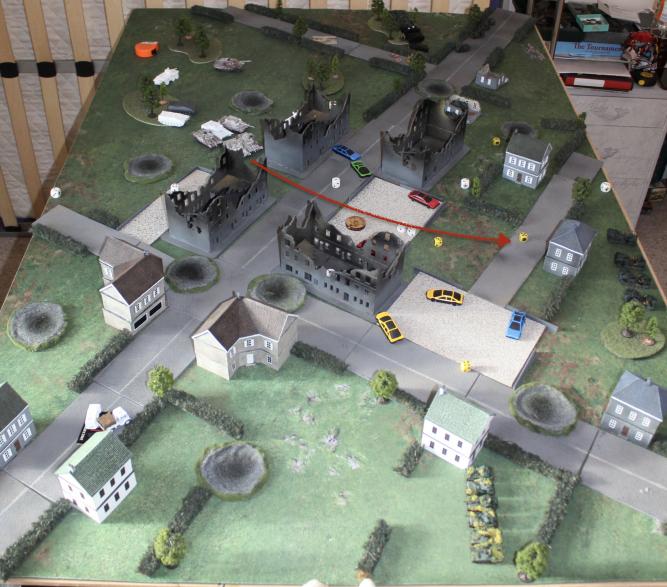 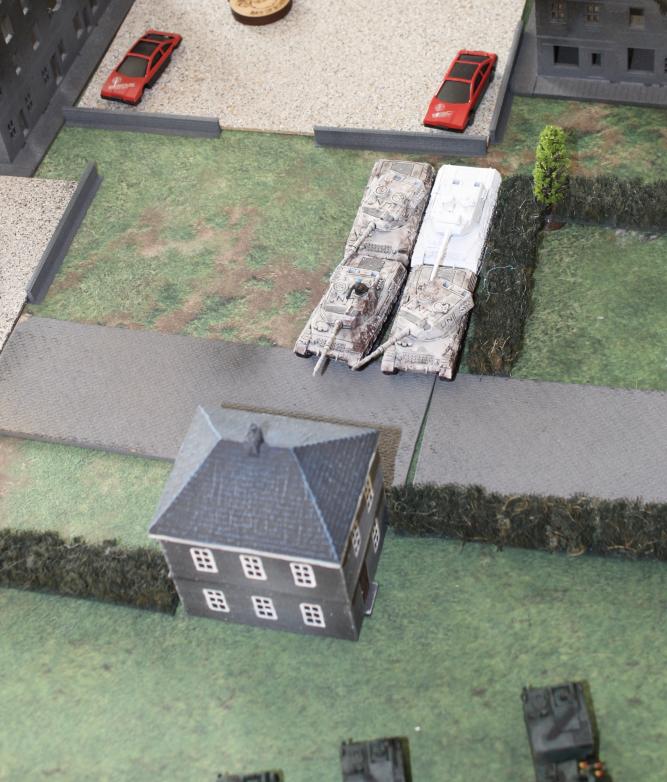 Leo1's line up in cover to take out the Rapiers

I don't have a picture of the results, but he had three valid targets and suffice to say all three died. 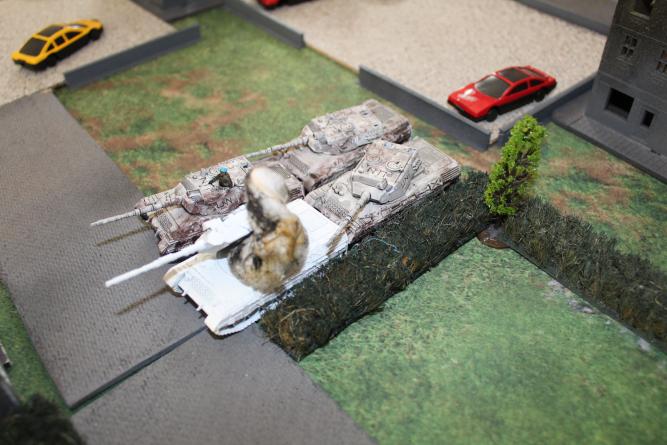 A small measure of revenge 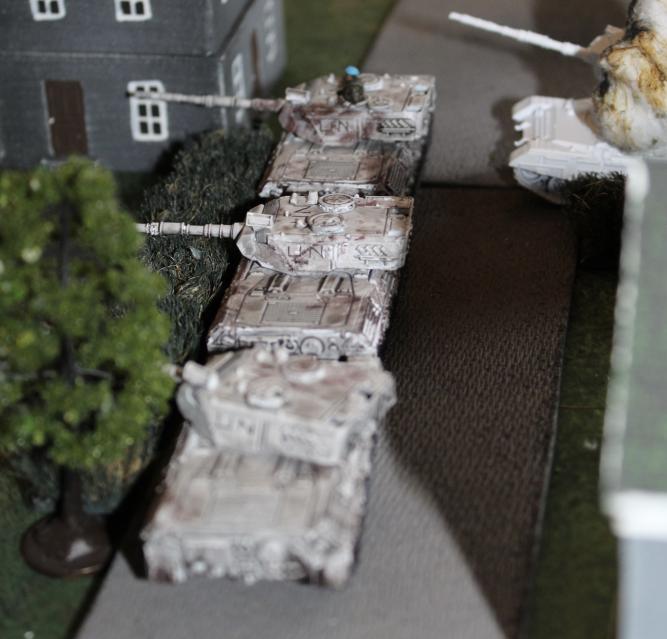 My opening gambit included my laying an objective that I could reach following a spearhead move. Fortunately for me Vinehart had moved heavily in the opposite direction, thinking i would be pushing with all my fast moving Recce for the other objective. Instead my final drops of deployment were to line up as close as i could get (8") with the aim of getting onto it my first turn. 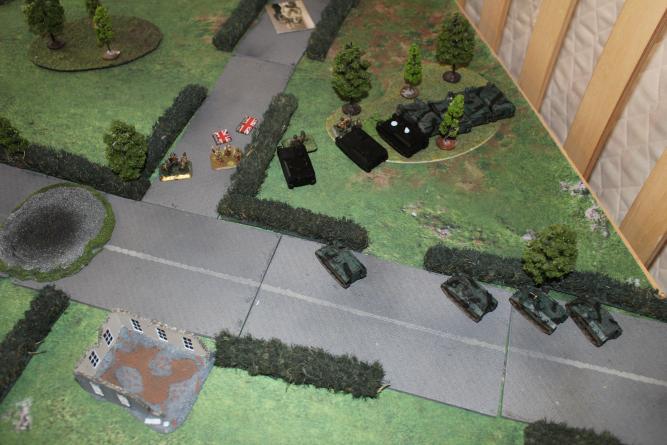 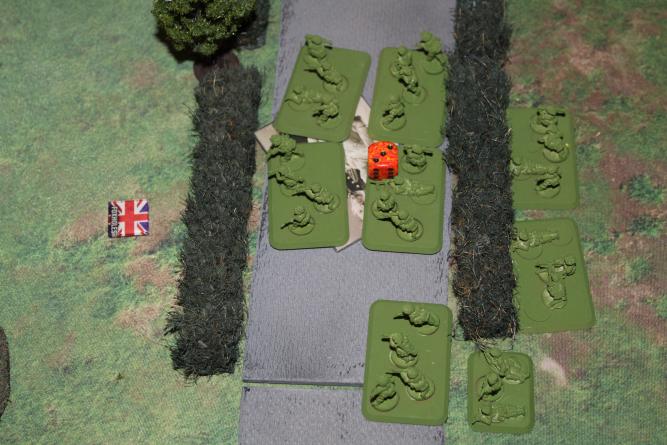 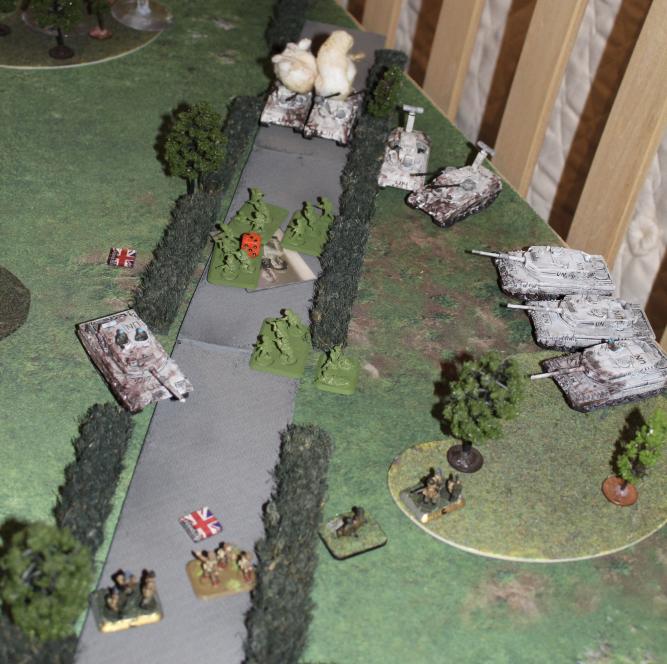 This turned into where i won the game but it was heavily contested with Vinehart piling all his reserves into the dug-in infantry in attempts to dig them out. Note the Leo2's that came on from reserve, hopped the hedges and tried to kill me from behind. 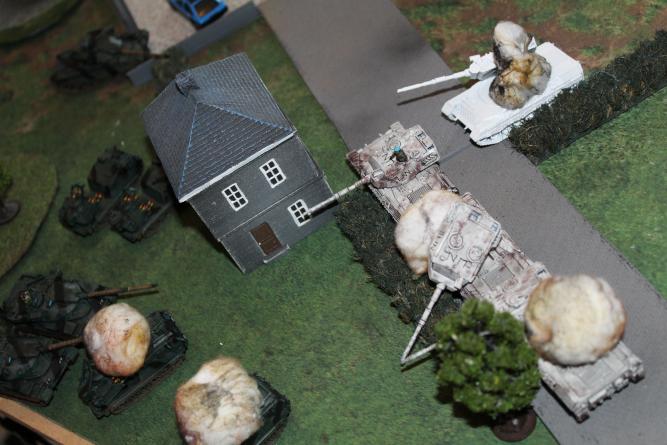 In the end, my big bad Chief's arrived from reserve and between some long shots from them and some assaults from infantry the Leo2's behind and the HQ's (Leo1 & Leo2) in front were pushed back enough for me to win.

WASH UP AND OPINION

So overall we had fun and thats the main thing. My list then. So the biggest issue was the number of 'drops' (yes really) that my list gave me when it came to reserves. Due to bad rolling my Abbots and the second infantry platoon didn't even make it onto the table. Now this isn't something to really complain about but i could have really used the Abbots but what other choice could i have made? Leave off my fast Recce tanks, or the Milan troop? Leaving the Strikers or Spartan MCTs off when playing against Leo1s & 2s clearly wasn't going to happen. Artillery just seems to struggle to find purpose whenever you play and have to put them in reserve. You need it on early but there are better options for initial attack and defence.

Air Power - Now this is probably just me but British Air power on paper looks good and balanced. However i have only found on the table that it gets shot down and kills nothing. I spent 16 points in total (10 - Harriers, 6 - TOW Lynx's). The Lynx's died thanks to Gepards (10 dice hitting on 5s) and the Harriers simply only turned up once (yes i realise thats my problem for bad rolls). Part of me now recognises the benefit of air but as i deal mainly in certainties, i keep thinking thats 16 points better spent elsewhere. I've already worked out a list with no air support but more Chieftains.

Gepards. By all that i believe in (Stephen Hawking RIP) they are phenomenal. To the point now that i am looking at taking a reduced Brit formation with an Allied West German one just to get some in my list. Ten dice. TEN DICE to aim at anything you fancy with AT11. Definitely a hidden gem in the West German arsenal as most people just bang on about how amazeballs the Leo2 is. Yes it is but like most really good German cars, its very expensive.

Overall though the game was fun and could have defended into a massive slog but we both played chances and enjoyed ourselves.

Firestorm has been fun and i look forward to the Free Nations book coming out and the campaign that will no doubt follow up after.