Following the losses incurred during our clash with the US Marines at Bad Belzig, Divisional HQ determined that we should be withdrawn for refit and to assist in training our fraternal German allies for their own offensive action against the Imperialist aggressor

Our Forward Detachment was tasked with collapsing back from an exposed position and then holding key supply dumps situated in a ruined church, whilst armoured comrades moved forward to assist and relieve us

Moving very quickly to try and overun us before our comrades could arrive to reinforce our German comrade brought our infantry, who were preparing to move to church area under concentrated fire from his AA guns firing in the ground mode, supported by a Company of tanks, the other tanks moved to outflank us, whilst we could hear the engines of his BTR 60 units working their way in a wide outflanking manouevre to our deep rear. His artillery also ranged in and forced our infantry to take cover deep in their foxholes.

The Germans were succesful in pinning down our Motor Riflemen, and their proximity meant any move toward the supply dumps would have been suicidal. However in their eagerness to engage the inexperienced German troops had straited within range of our RPGs, even firing from deep in our foxholes were were able to destroy 6 of the enemy ZSU vehicles, forcing one of the Companies to flee field

On our northern flank we engaged the enemy tanks with a mixture of ambushing Shturm vehicles and T64 tanks, the enemy T55s lost 5 of their vehicles, giving them pause for thought, whilst on our southern flank our BMP recce comrades decided to trade space for time rather than engage at very heavy odds the BMPS and T55s our enemy was seeking to push through our lines

Our enemies courage could not be faulted and they contiunued to push forward hoping to catch us between their tanks and arriving BTR infantry unit , in a bid to tie up our T64s and Shturms the German comrades continued to push their T55s forward in the north, and began to engage our BMP recce company. German artillery fell around our Shturms, destroying one of the vehicles.

Because we had been able to thin out the enemy threat to our centre, our infantry men were able to move swiftly to defend the supply dumps,, making full use of the shell damaged buildings and destroyed church, our brave BTR crews were sent to try and slow the advance of the enemy infantry. Further RPG fire destroyed the last enemy Shilkas and our T64s, proving invulnerable to enemy tank fire, were able to destroy the T55 company they faced

Once more the enemy pushed forward courageously, further infantry arrived, T55s pushed into the ruined village and a further company approached the supply dumps from the south, unfortunately for the enemy their artillery was unabale to further damage our vehicles, but their fire began to hav ean effect on our brave motor riflemen, and our BTR transposrts suffered catastrophic losses at the hands of the German infantry now massing to overrun the church, and seemingly enjoying charmed lives despite heavy fire

Again the crisis of thebattle had been reached, once again our skilled radio technicians were the key, lifting enemy jamming and enabling our comrades to hear and respond to our requests for aid, Shilkas, T64s and BRDMs were able to attack the enemy artillert battery, putting it out of action in the case of the Shilkas, engage the southern enemy tank thrust (T64s) and help our infantry deal with the infantry threat to the church (BRDMS), infantry RPGs and AT4 crews were able to teach our German comrades the folly of committing T55s to narrow rubble choked streets, severeley depleting their numbers

Realising that a final effort was necessary, the Germans tanks and infantry launched a final heroic attempt to clear our depleted infantry from the objectives, the paint marked hulls of the last tanks, and “dead” bodies of the infantry hit by dummy AK rounds marked the high point, just metres from the objectives, every German vehicle had retreated from the field or was marked by our paint shells, except a solitary Command BTR, every infantryman had been deemed a casualty.

Our courageous German colleagues will undoubtedly be a significant asset to our defense against imperialist aggression , if they can gain a greater tactical acuity 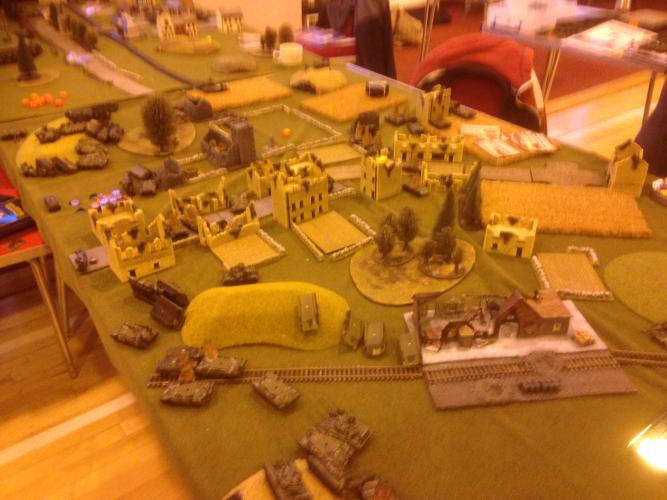