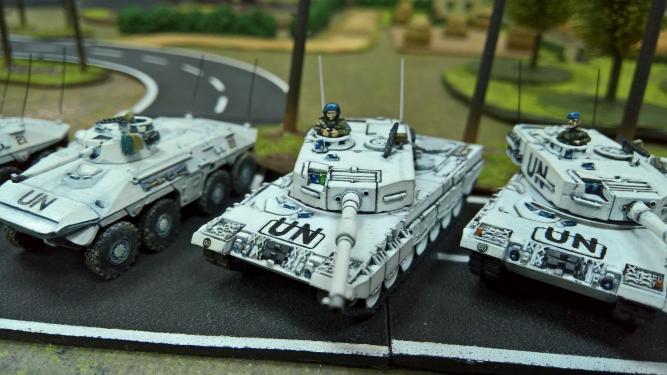 The advance of the battle group of Colonel Dolch was very successful. Unloading all the troops, he quickly led the column to Hannover leaving behind the main group of Soviet troops. With the support of German aviation, the column successfully passed with the Soviets moving to Hamburg.
But when approaching the town of Walsrode, the fighter aircraft covering them from the air reported that they were meeting with a tank group of at least 20 tanks and they would meet in half an hour.

- Well, gentlemen. It's time to check out these wonderful tanks in real combat.- Said the colonel on the radio. - I'm advancing with the two platoons, the infantry, Jaguars and Gepard's ahead, the rest of the group get tight as you can -

The Colonel leaned back in his seat, enjoying the smooth movement of Leo-2.
"What a wonderful tank, especially after Leo-1. How well we got them ... "he thought with pleasure watching the scenery through the commander's monitor. 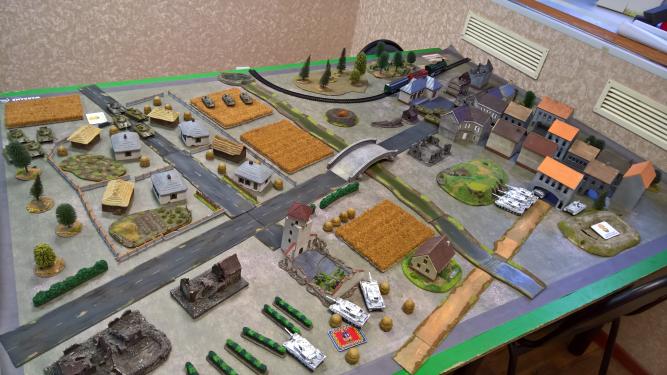 After half an hour, an advanced group of two Leo-2 detachments, a Jaguar squad, an infantry squad on the Marder's and a Gepard squad due to its powerful engines reached the outskirts of the town of Walsrode. The colonel ordered to leave the highway and take a position that would be between their positions and the advancing tanks of the Soviets. 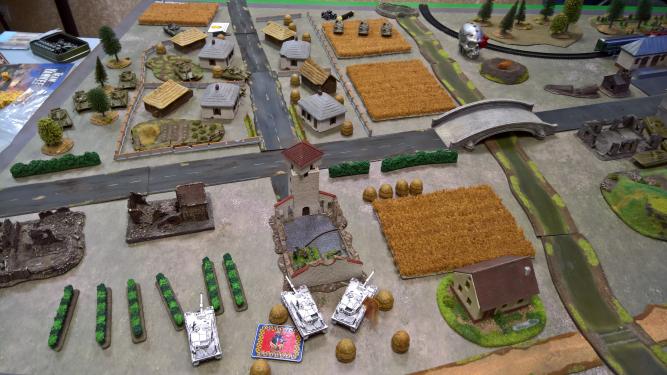 And only the tanks managed to occupy positions as on the other side of the highway appeared Soviet tanks walking along the country road to the highway. 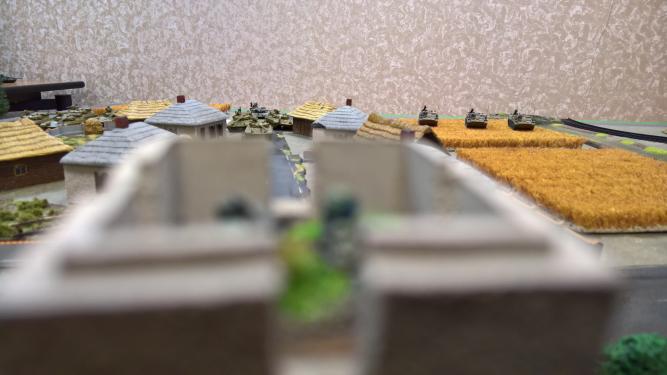 "Colonel, they're on their way through the village, but they are also going around it on the left and right. - reported Corporal O'Donovan from the top of the tower of the ruined monastery where he sat down with his Milan launcher. 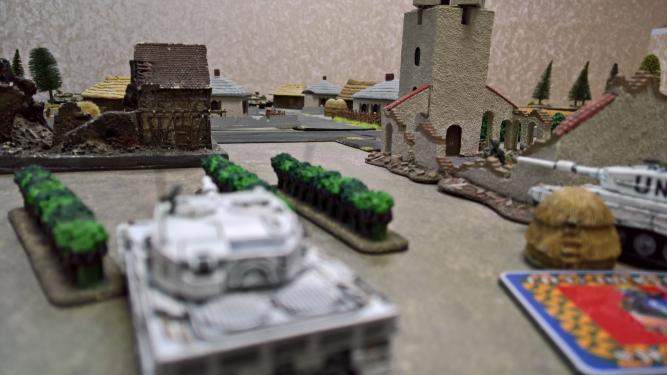 "We see the enemy only in the village," said the commander of the first platoon, Leo-2. 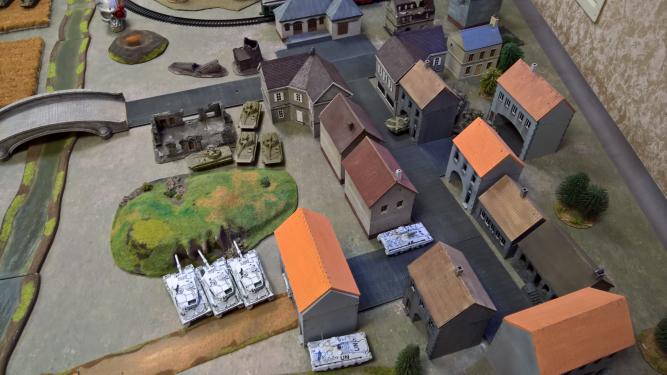 Meanwhile, Lieutenant Nielsen (who again decided not to leave such a convenient APC Marder) was horrified to note that almost a dozen BMP-2 were making his way to the second platoon of Leo-2 on the outskirts of the town. 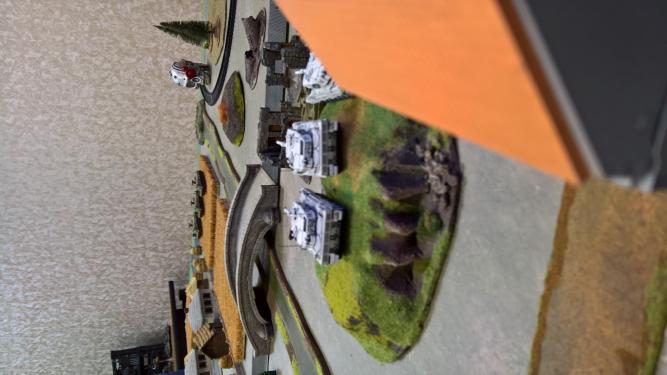 - All units, attack! - Colonel Dolch ordered the radio and the second platoon Leo-2 drove to the hill immediately noticed the strange tracked Soviets vehicles going through the field. 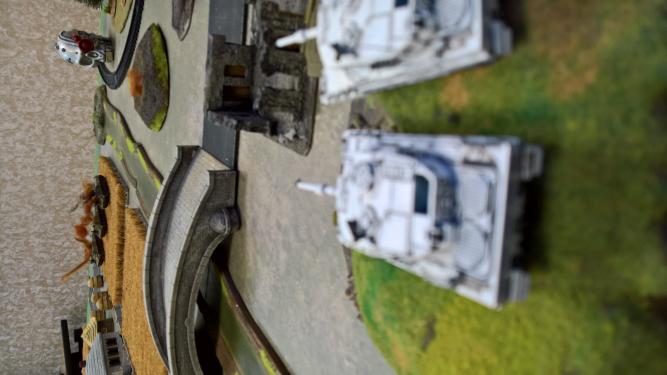 The tanks opened fire and their shells within seconds turned the enemy's machines into flaming bonfires. 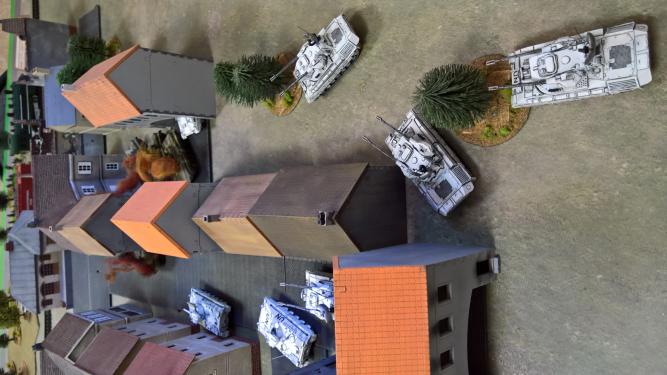 Meanwhile in time on the outskirts of the town duel BMP was fastened. What the commanders of the Soviet BMP detachments did not expect was the fact that in the city behind the buildings were hidden Gepard suqad, which, with 35mm cannons, destroyed the BMP at a tremendous speed. 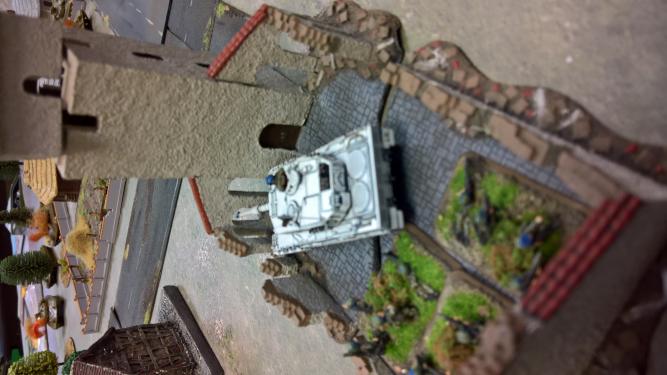 Colonel Dolch spent all his spare time before the battle to drive his tank into ruins, finally was able to see a detachment of tanks going on the outskirts of the village. He did not even have time to give the order, and his gunner had already opened fire on them. - Hans! Do not rush! Let them get to the line of sight of the first platoon! - Said the colonel through the radio. 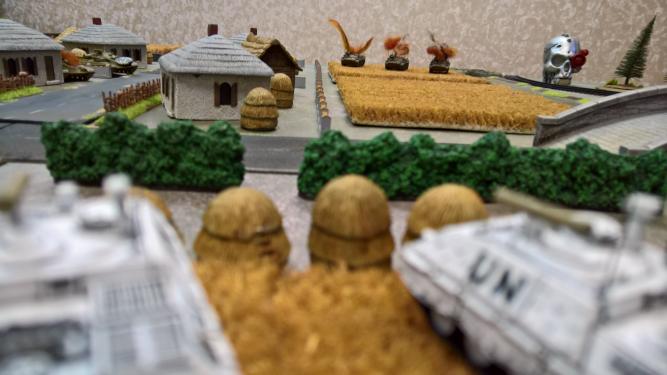 Meanwhile, a platoon of Jaguars, previously hiding in the field, opened fire on tanks marching through the village. 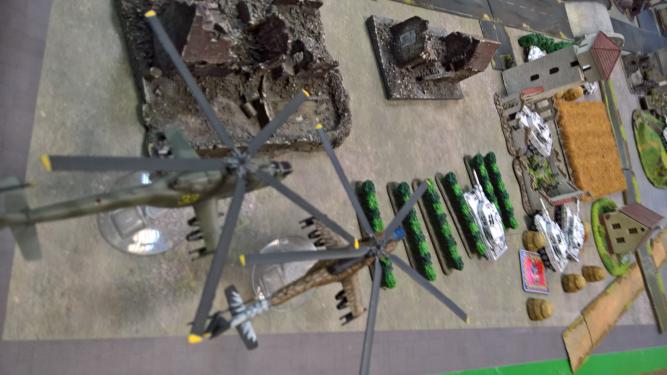 The Colonel commanded the fight sticking out of the hatch so that he first saw two Soviet helicopters calling from the flank to the tanks of the first platoon. The first missiles found the target and one tank of the first platoon flamed and the tankmen quickly jumped out of it. - Air Defense !!! Where are you? - He shouted into the radio. 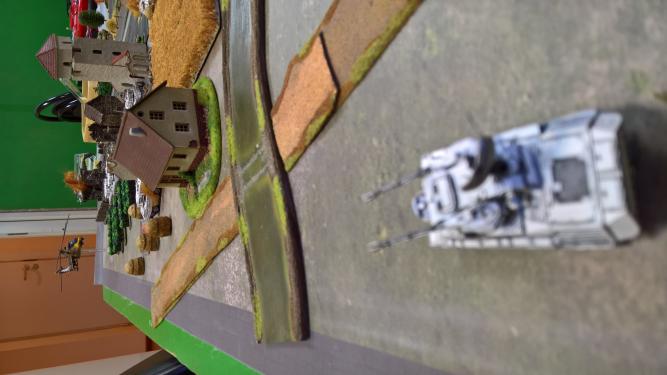 "Where they should be." "Answered the calm voice of Lieutenant Adams of Kentucky, whom he brought to the UN troops by blind chance. His Gepard opened fire and one helicopter immediately flamed and collapsed into ruins. 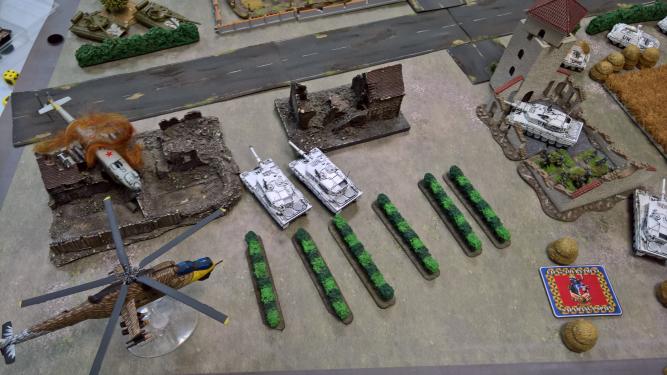 The second helicopter dodging fire from the ground missed the tanks in the second volley. 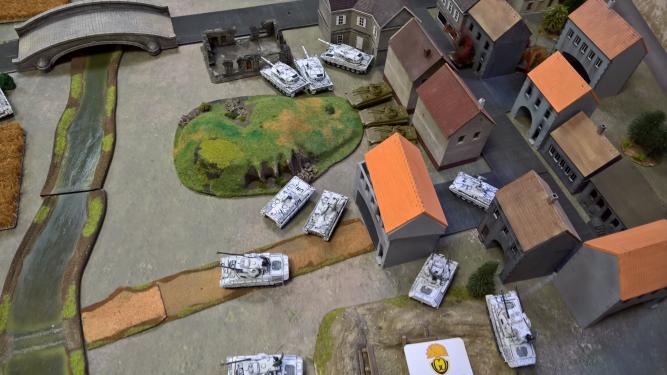 - Nielsen, the remaining BMP on you - said Adams, and Gepard squad began to leave the city and going to have line of fire on the helicopter. - This one is not knocked down. 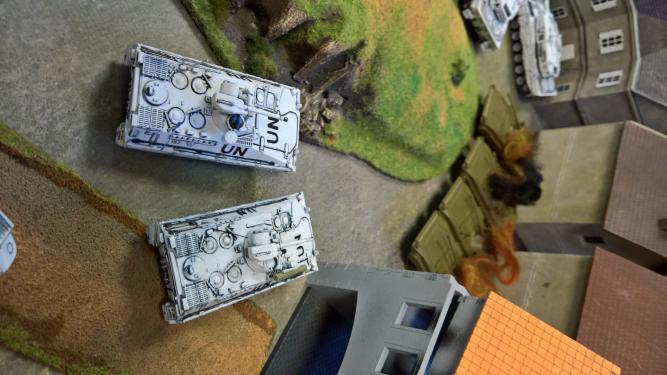 - No problem. - answered Nielsen on the radio, and his APC crashed the fire of their guns at the enemy BMP. Literally in half a minute all was over. 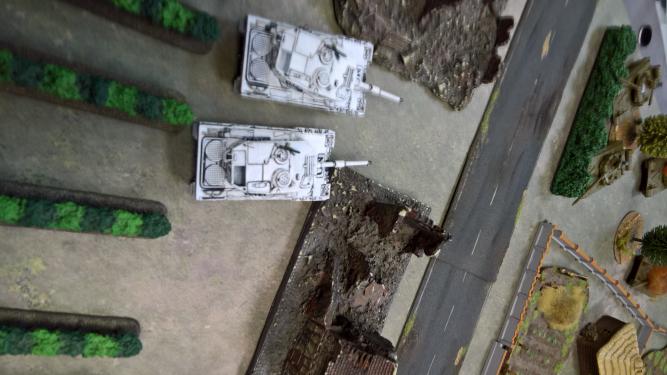 Meanwhile, two tanks of the first platoon position changes that would be able to fire enemy tanks that bypass the village. 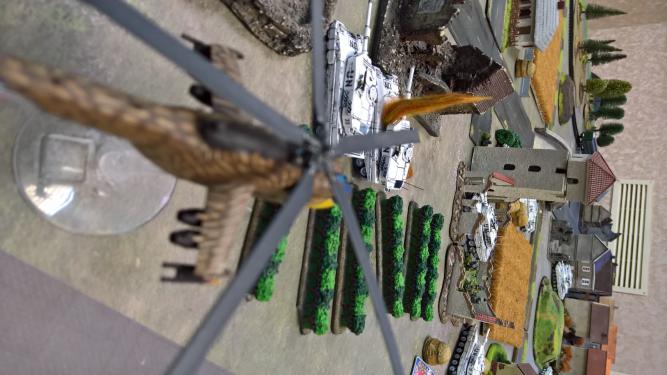 - Hans! No! - Only this the colonel had time to shout on the radio, when the helicopter returned to the line of attack and the second tank of the first platoon flared up with fire. And the colonel with a sinking heart looked at the tank but the fire in a second burst from the turret hatches summed up the fate of the crew. 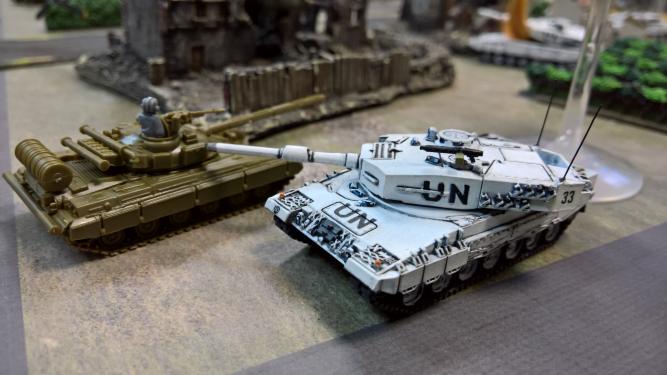 The third tank jerked sharply to meet the helicopter and slipped under it in the face of a collision with a Soviet tank. "You have a bad day as a communist." - Sgt said sergeant gunner Albrecht and without waiting for orders, he pressed the trigger. And just before the Leo-2, a volcano of fire opened. The tower of the Soviet tank flew off three dozen meters to the side. 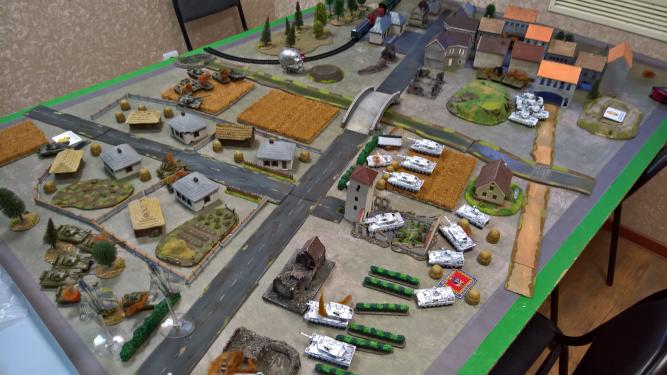 - How many of them! Second platoon, move to me, there are too many enemies. - Said Dolch on radion, watching the battlefield. In the field near was a platoon of Jaguars, destroyed by the second or third platoon of Soviet tanks that left the village on the right. And the enemy tanks did not end there, again a group of T-64 tanks appeared on the left. 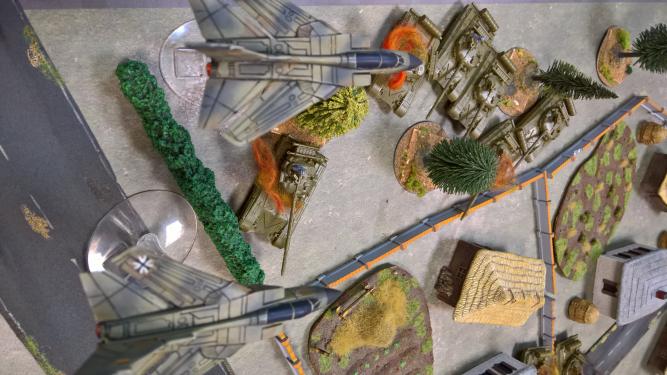 "Hey, Snow White, need help?" came a request from air support. And the Colonel in the tank activated the air guidance system. "At last!" thought the Colonel, quickly seting the coordinates of the target. He even managed to lean out and see how the two Tornadoes pour out a full charge of bombs on a platoon of Soviet tanks turning them into flaming debris. 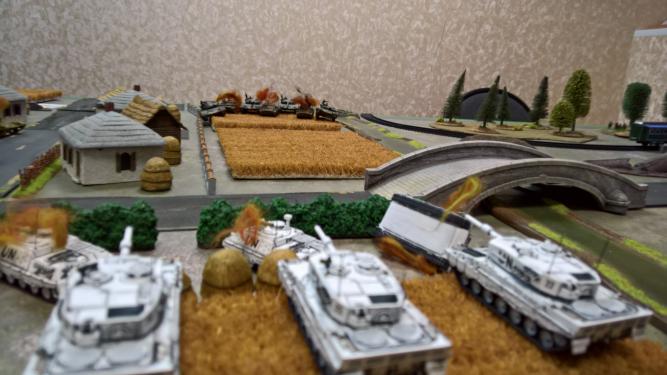 The second platoon, passing by, began to fire on the T-72 platoon going strictly on them. 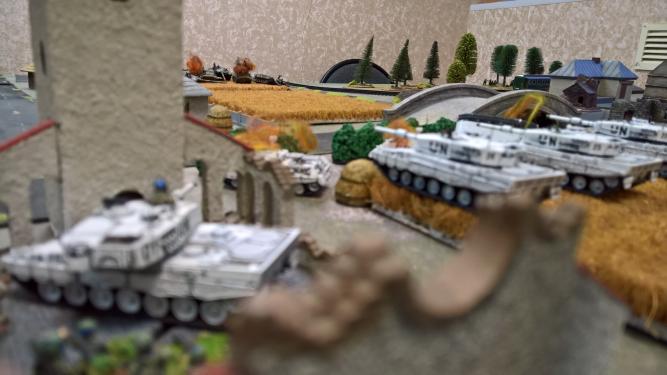 The colonel ordered the turn of the turret of his tank and joined the shelling of the T-72 on field. "They're still coming and going," he heard a report from the commander of the second platoon. 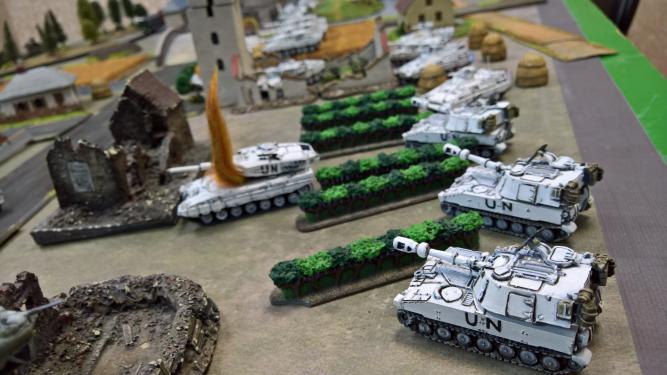 - Reporting artillery. We arrived. - reported by Captain Prost, on the radio. "Oh, it seems, we even have a lot to shoot," he told his platoon receiving target parametrs via the command network. 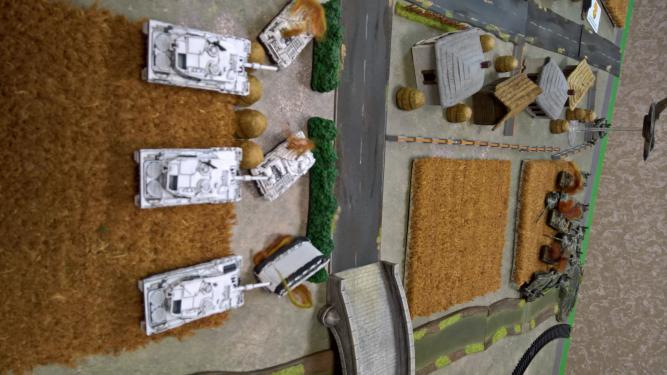 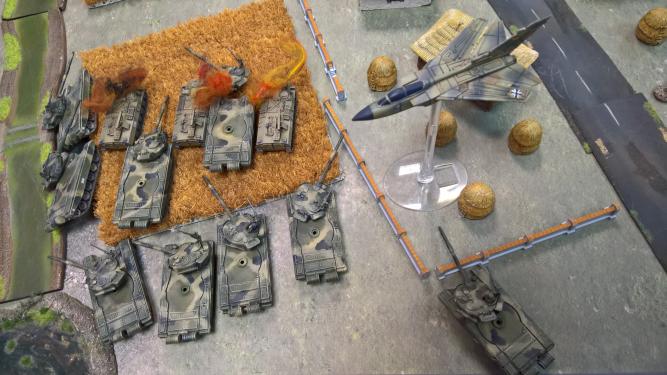 And one of the tornado turned to the same emptying the remnants of ammunition on the heads of the Soviet tank. 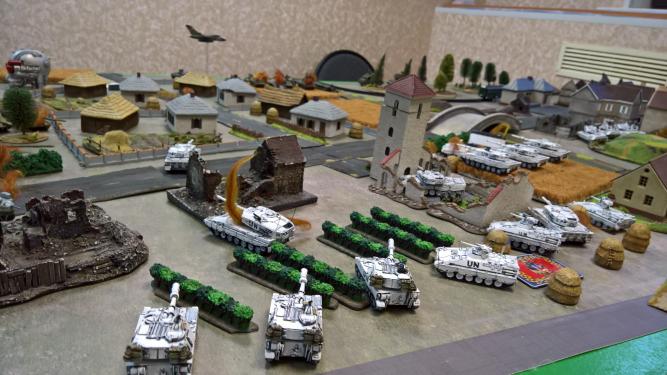 The artillery added a volley and finally all Soviet tanks ceased to exist. The battlefield was left for the soldiers of Colonel Dolce.

Lieutenant Nielsen was sticking out of his Marder's turret and looked with horror at the picture of the battlefield. In less than half an hour they lost the Jaguars and two Leopards, but only one crew was killed.

Looking at two dozen burning Soviet tanks, on his wounded comrades Nielsen understood that the war in Europe would be completely different from their operation in the Congo.
- Nielsen !!! - he heard the roar of the colonel, - bring your Marder here! My tank is stuck in these fucking ruins! -