The morning begins with ..... Communists! 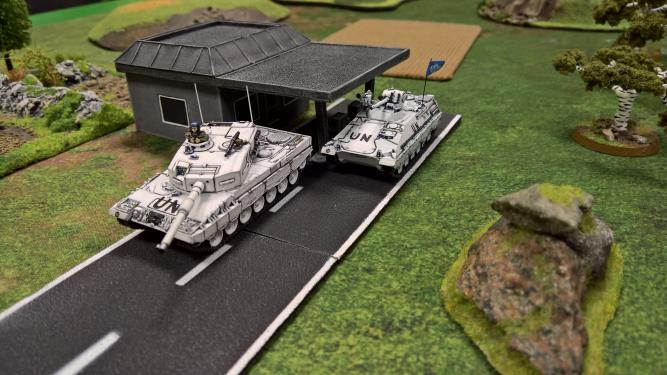 Peacekeeping contingent in the Congo. Date of formation 01.01.1984, number of the resolution of the UN 545.
Tasks, the separation of the conflicting military groups in the newly flared civil war.
Commander - Colonel of the Bundeswehr Phillip Dolch
Composition - two tank, two infantry, and one reconnaissance battalion allotted from the Armed Forces of Denmark and Germany.
The unofficial name - the battle group "White Elephants"

The time is 6.20am
Date - day of landing of 2 divisions of the US Marine Corps in Hamburg(august 1985)
Location - exit on highway 73 near Otterndorf

The colonel Dolch stood beside his tank and looked up, with growing irritation, he studied the traces of combat damage on his tank armor.
Lieutenant Nielsen came up from the small station and handed the colonel a cup of fresh coffee.
- What Oberst, Communists shot you?- Asked the lieutenant, handing the coffee to the colonel.
- tank itself is OK, but how these snipers managed to shoot my flag ?! – said colonel irritably and started climbing on his tank.
The lieutenant looked attentively and indeed, in the place where the UN flag was supposed to be on the antenna, only a pair of blue scraps flashed.
- Okay, let's get this nasty drink. - The colonel took a mug from the lieutenant and put it on the turret, climbed into the hatch. - Are your people ready to leave? We still have a lot to do today! -
- Yes sir! We already paid for the coffee and clarified the direction of the movement. Maximum two hours later we will go to the contact with NATO forces in Hanover! - said the lieutenant and involuntarily glanced at the place where the Soviet tank group burnt down, destroyed by their detachment an hour earlier.
- Are you sure sir that we should not help the Marines in Hamburg?- the lieutenant asked doubtfully
- Marines always tell everyone how cool they are, so they have a real chance to prove themselves in the business. - grinned Colonel Dolch - We'll go along highway 495 between Hamburg and Bremen strictly to Hanover.-
- Let's go guys, we still have to win back our country! - Colonel shouted to the soldiers, wearing a headset and still sticking out of the turret hatch. He took the coffee and watched the lieutenant collect his platoon on his APC.
And within a minute his battle group "White Elephants" - as they managed to nick them in the Congo - moved along the highway. 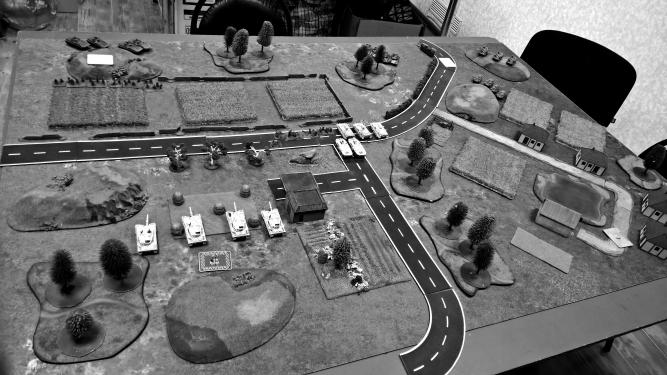 The landing at Odnendorf under cover of night was successful and while the main group was being unloaded the colonel led three platoons forward to secure the exit on the highway 73. 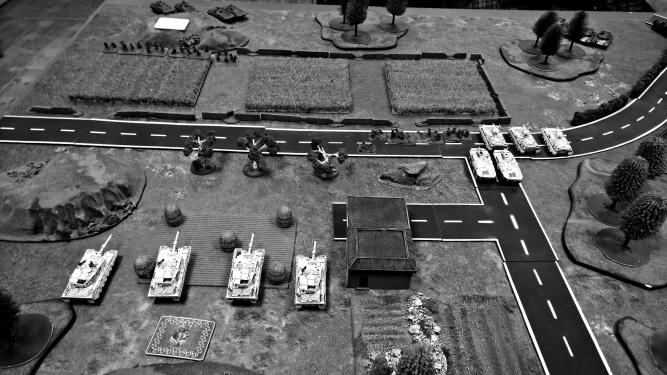 Although the Marines landing in Hamburg diverting all Soviet troops in the area, Colonel Dolç relied that the highway will be under protection of soviet troops. 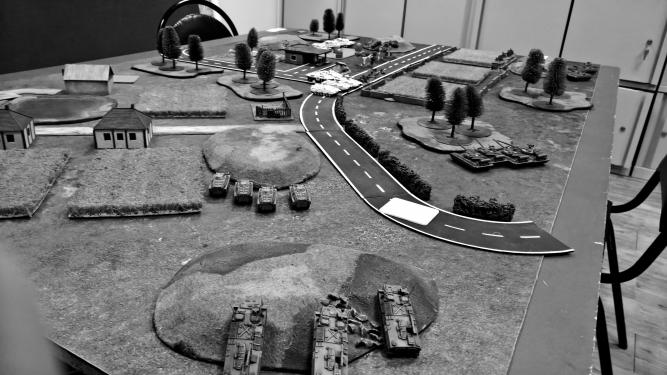 And already approaching the crossroads, the colonel saw through the thermal imagers the columns of heat from behind the hills and groves. "Nielsen, get your people off at the crossroads, we go to the left of the field. Now we will fall into an ambush.” - said the colonel on the walkie-talkie to the infantry company commander Lieutenant Lars Nielsen 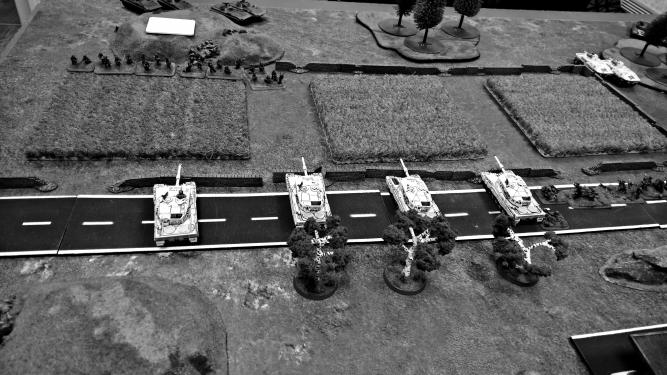 - Moving guys! - shouted the colonel in the walkie-talkie and his tank, along with the first platoon, quickly crossed the field taking a position along the fence on the highway. 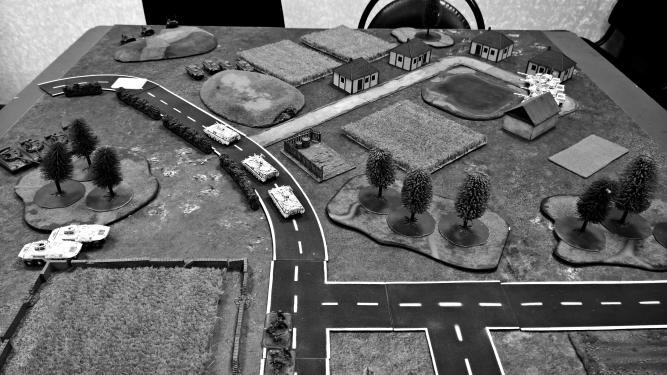 Meanwhile, Lieutenant remained in BMP led Marders squad bypass grove for recon. He knew that a detachment of battalion reconnaissance tanks was coming slowly and imperceptibly from the flank to support his maneuver. 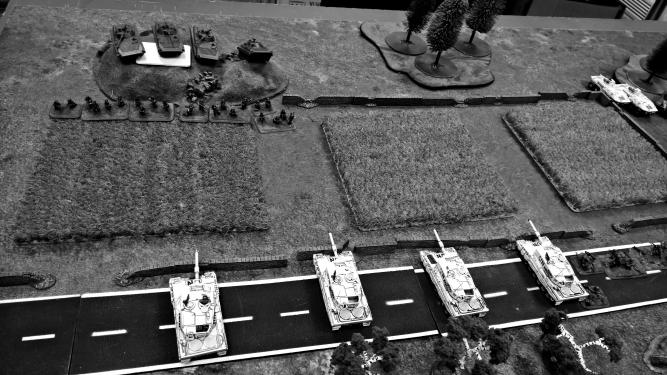 As Dolch and expected from behind the hill appeared a detachment of enemy BMP. Who tried to shoot him with missiles but could not normally aim after the move (did not pass the blitz) 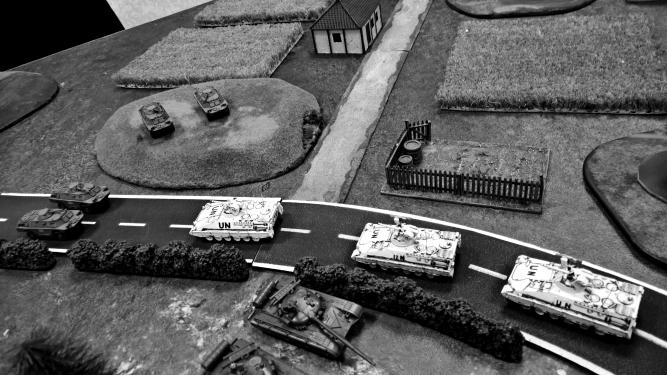 In the meantime Nielsen with horror had seen a platoon of T-64 people leaving from behind the forest. But the tanks drove past leaving the attack on the Leopards. But the detachment of BRDM flew to Marder Nielsen. 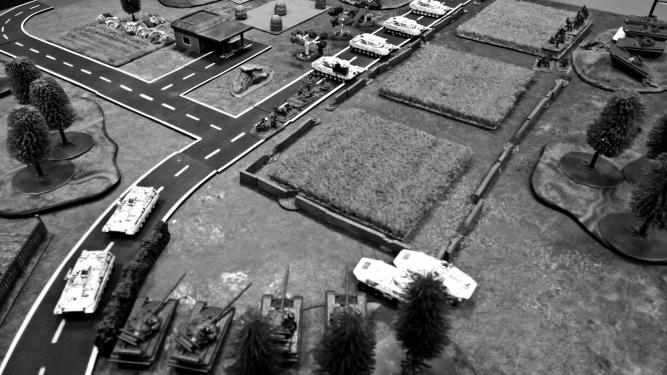 Soviet tanks opened fire with movement and the first shot was fired by one leopard. Leo-2 smoke and his turret was crooked. 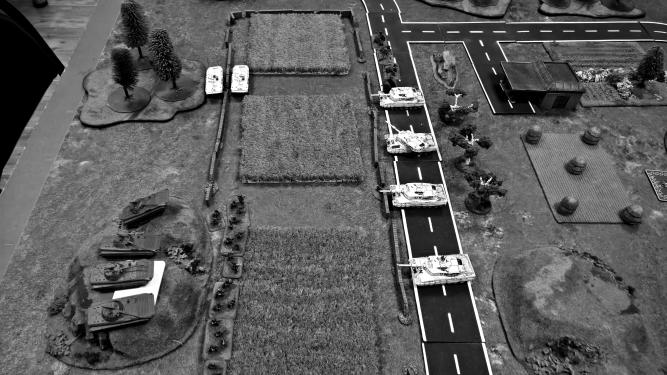 - Do not be distracted by tanks! - ordered the colonel on the radio. - Second platoon to deal with them. - 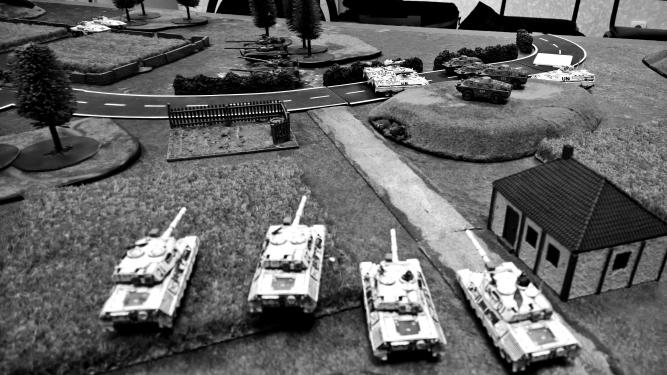 The second platoon, hidden by the darkness of night, imperceptibly approached the T-64 from the flank. And now when Soviet tanks opened themselves up, Captain Olsen gave the order to open fire. 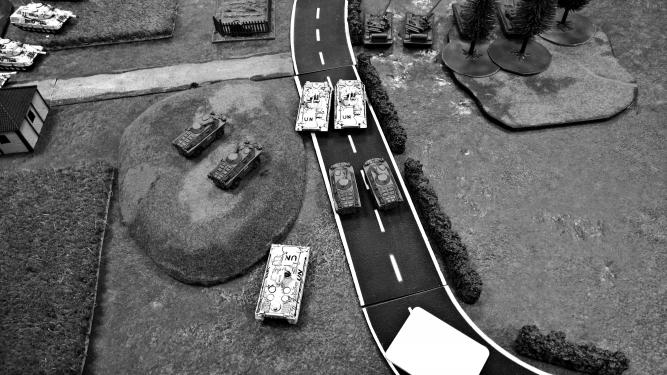 Meanwhile, Nielsen threw his Mardery through the ranks of the BRDM and opened fire on them from the turrets cannons. 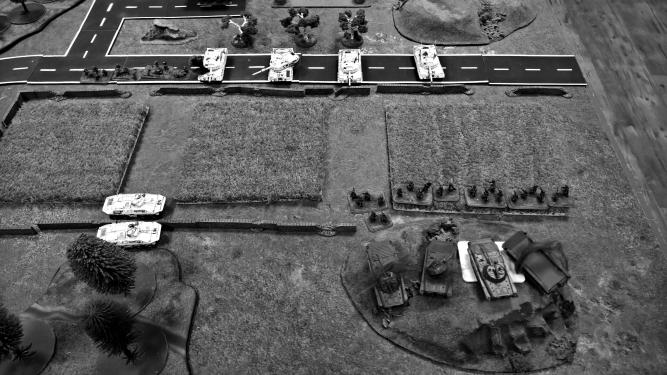 Soviet commanders knew that these strange white tanks for a year at war in the Congo and even under fire from several sides of the crew did not panic. First, the Leo-2 projectiles broke brittle BMP. 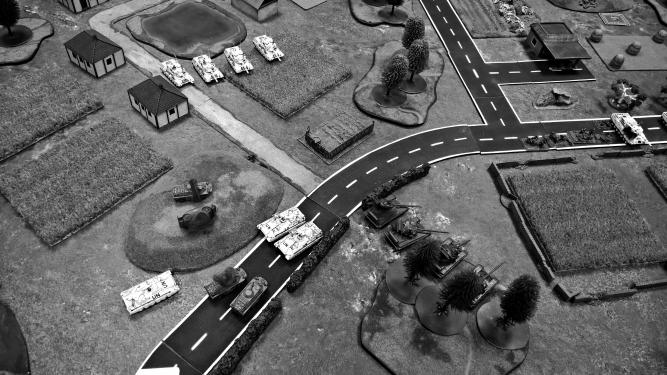 After a few seconds, the shells of Leo-1 tore into the side of the T-64, exploding one tank after another. 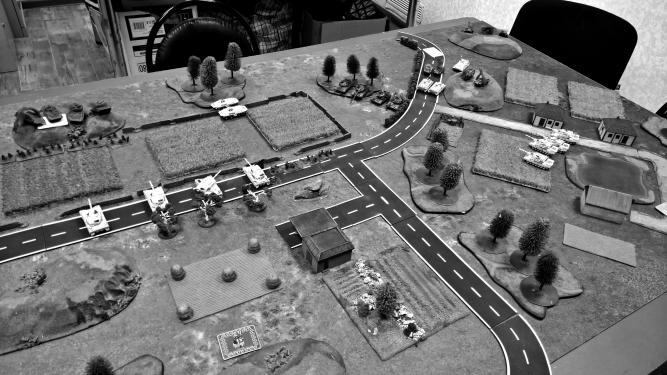 Nielsen's armored vehicles filled the BRDM with fire, exposing them as cans. Nielsen himself noticed three STORM machines on the hill and fired both of them with cannon. 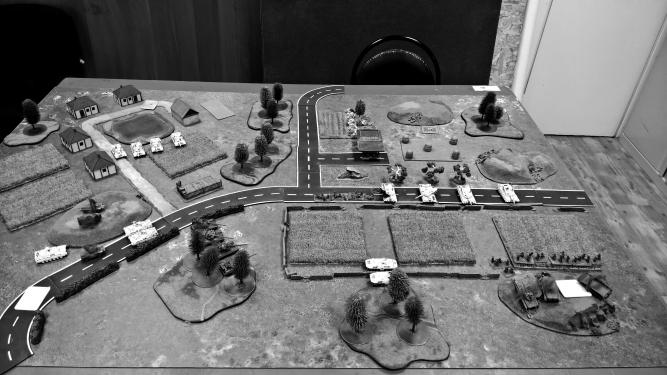 And in a couple of minutes it was all over. The Soviet infantry tried to summon reinforcements on the radio but, without even receiving an answer, preferred to retreat.

A few words about the party.
Everything was very fast, since I successfully shot the Soviets for three turns, and he could not call for reserves and I just took the Objective. 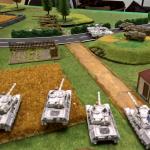 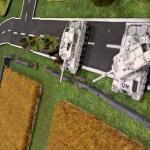 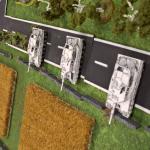 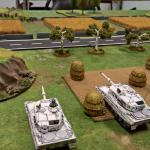