End of All Hope

Peacekeeping contingent in the Congo. Date of formation 01.01.1984, number of the resolution of the UN 545.
Tasks – the separation of the conflicting military groups in the newly flared Congo civil war.
Commander – Colonel of the Bundeswehr Phillip Dolch
Composition – two tank, two infantry, and one reconnaissance battalion allotted from the Armed Forces of Denmark and Germany.
The unofficial name – the battle group “White Elephants”
17 August – the day when they appeared in Europe.

Read the previous parts of the story in my profile.

The time is 2 a.m.
Date – 20 August, Ulm, Bavaria.
Nielsen's group did not manage to arrive in Ulm as they found hasty gatherings in the White Elephants camp.
-Lieutenant!- оne of the sergeants of the support group called to him. - Move your Marder's to the railway station, our group is loaded and transferred somewhere north to the Ruhr area. Now we will work with NORTHAG. -
- What happened? - Nilsen was surprised
- Apparently the big offensive is sir! - cried the sergeant and ran on.
Nielsen led the remnants of the battlegroup to load, and within an hour several Railway trains carried the White Elephants through the night darkness to Ruhr.

The time is 8 a.m.
Date – 21 August, NORTHAG HQ, Düsseldorf, North Rhine-Westphalia.
Colonel Dolch returned from the main headquarters in a very bad mood. The officers waiting for him in the staff tent quieted down when he entered.
- Gentlemen.- colonel paused and looked around slowly. - bad news. HQ planning to use us as regular troops. And I do not like it very much. You will receive all orders within an hour and prepare to be move to the position. I'll stay here and try to recall all my connections to restore our independence. Is the order clear? -
- Yes, sir. - amicably answered his officers.

The time is 15 p.m.
Date – 21 August, near Nordhausen, Leipzig warzone
Captain Irwin critically examined the area in which they were to keep the defenses. The infantry already occupied positions and Mardier's hid behind the ruins. And Leo-2 of the first platoon was already successfully disguised in the field with the help of camouflage net.
"Reporting Gepard leader. See the approaching air targets "came over the radio from Captain Adams.
"All in the position." Irwin commanded and closing the hatch of his tank. 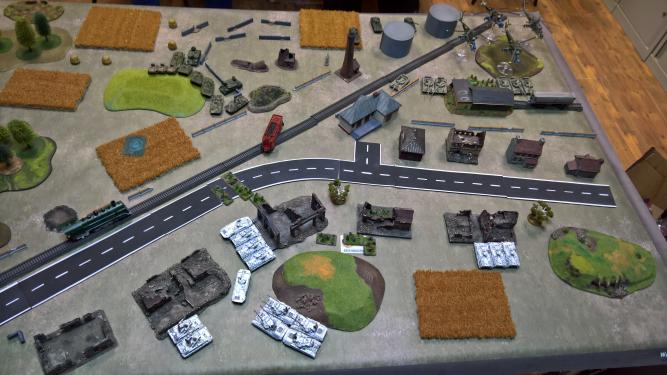 "They're getting closer! On all sides!" reported to Captain Irwin on the radio from Sgt. O'Donovan whose platoon sat on the right flank in ruins. 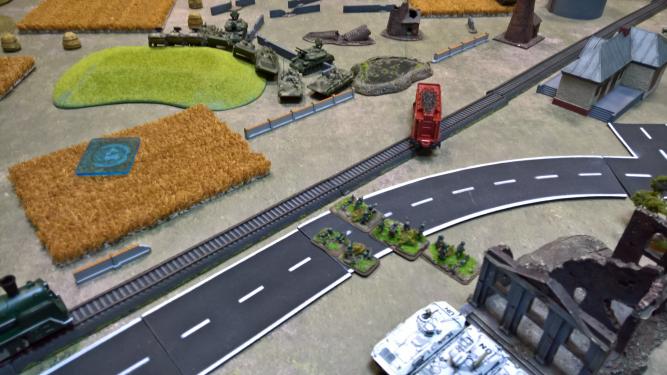 "Left flank! They walked us behind the hill!" A panic report from the platoon of the infantry on the left flank came over the radio. 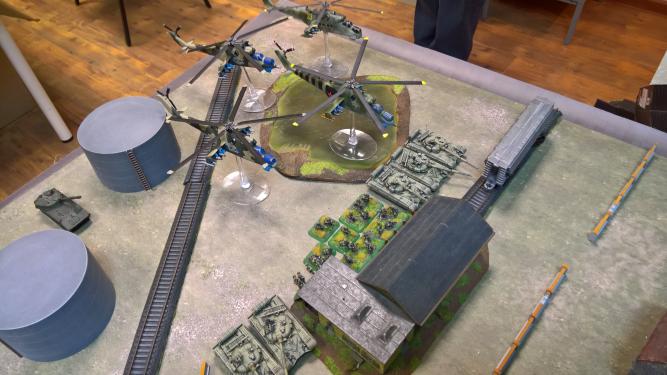 "We see helicopters, it's not ordinary infantry or tanks unit, it's all the veterans of Afghanistan!" tentatively reported on the radio, Captain Adams from his Gepard. 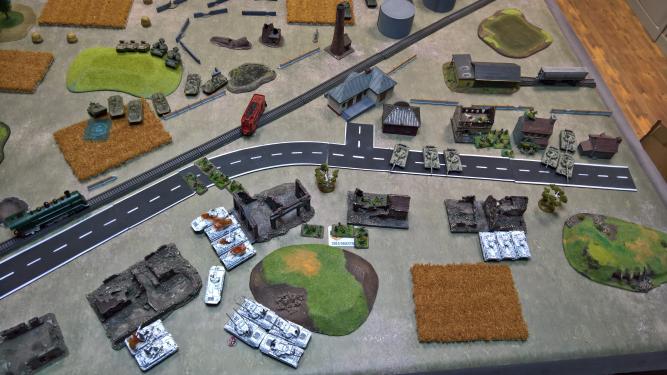 And for the first time during this war, the Soviet tanks and infantry with the shouts of "Hooray" quickly moved forward, suppressing the soldiers of the White Elephants by continuous shooting. Captain Irwin heard with horror how crewmembers of the second Marder's squadron screamed in panic when their tanks started flashing one after the other from the murderous fire of the BMPs coming to them from the flank. 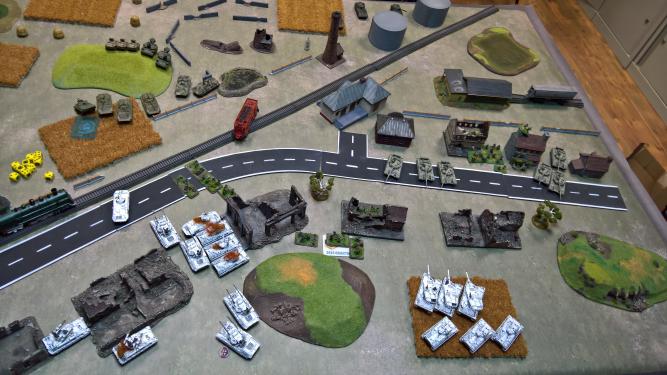 Marder's from the right flank backed into the field and on the left flank Captain Adams moved his Gepard's to intercept the BMP. 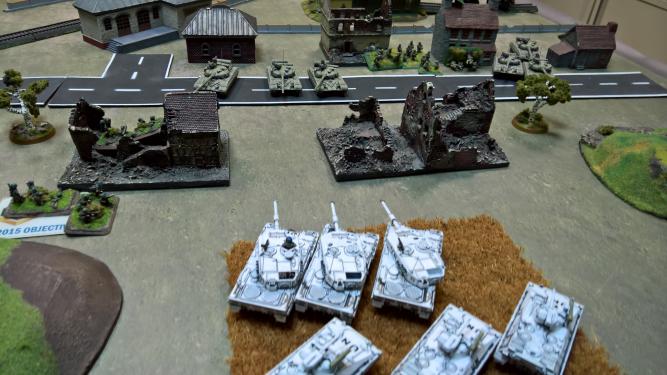 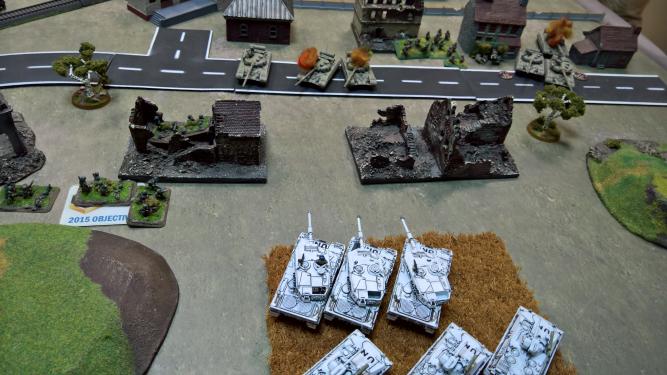 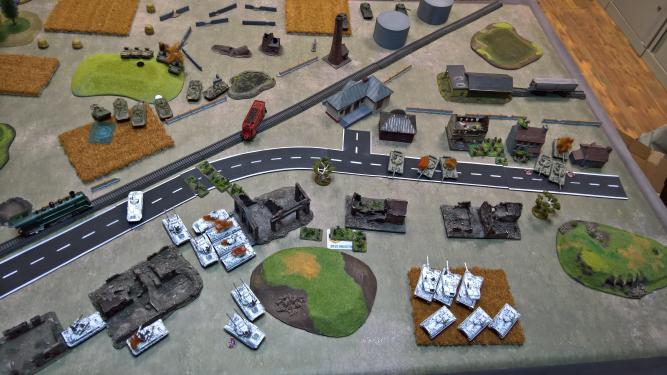 Both infantry platoons concentrated the fire of Milan on the second detachment of tanks and although only one exploded there, the other two were clearly badly damaged and their crews left them in an organized manner. 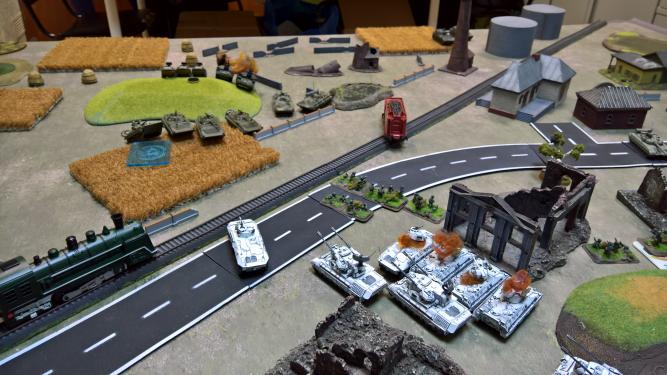 On the left flank Gepard's opened fire on Soviet BMP but the drivers at this time skillfully hid their BMP behind cover and all the shots passed. 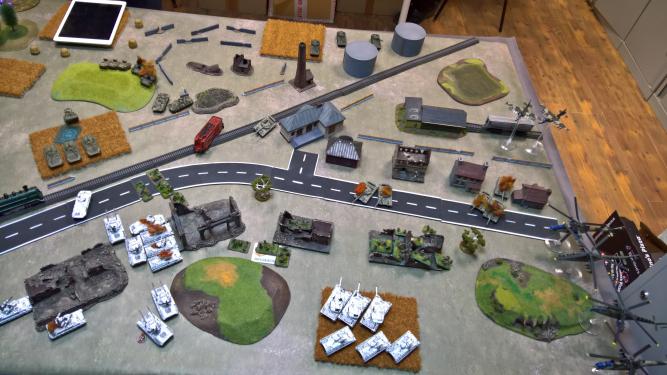 On the left flank BMP continued to move forward firing. The Soviet infantry, losing support of the tanks, did not slow down anyway, was approaching the position of Leo-2 skillfully hidden in ruins. 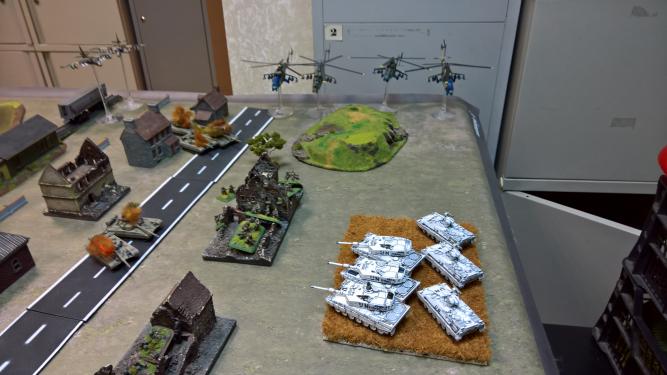 But looking around the battlefield in the periscope, Captain Irwin froze in horror. On the right to the position of his tanks on a short flight, helicopters were approaching, and on top of them they supported the Su-25. 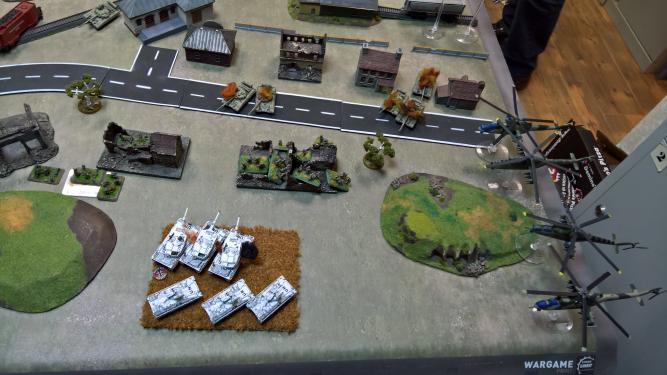 The rockets covered the Leo-2 platoon and the two tanks were flamed and their crews quickly began to leave them. And Captain Irwin's tank shuddered at the close gap. "Captain, the right track is broken down!" reported the driver. 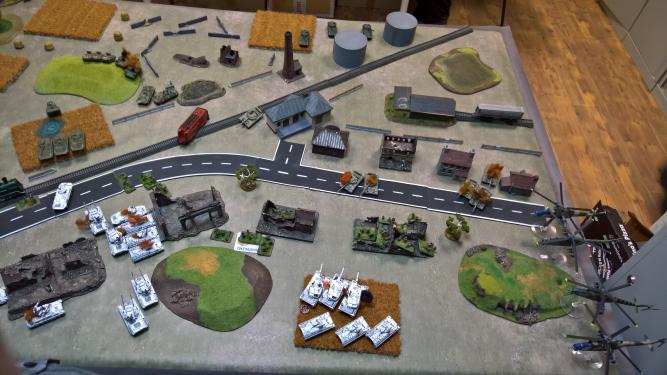 The situation of the soldiers of the White Elephants became catastrophic. Soviet soldiers increasingly attacked them from all sides. But the soldiers of Colonel Dolce continued the battle! 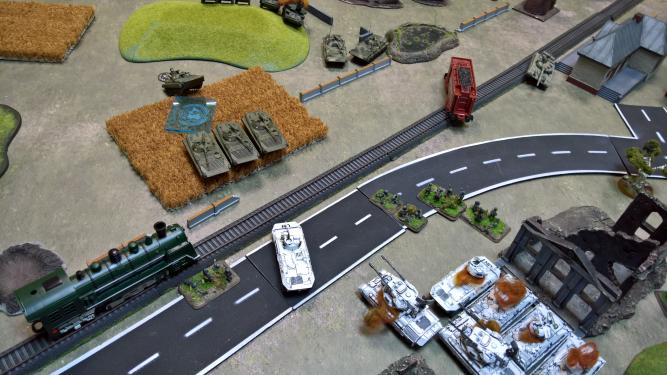 But luck was not on their side. The detachment of the BMP on the left flank was advancing through their fire, still not having received one effective hit. 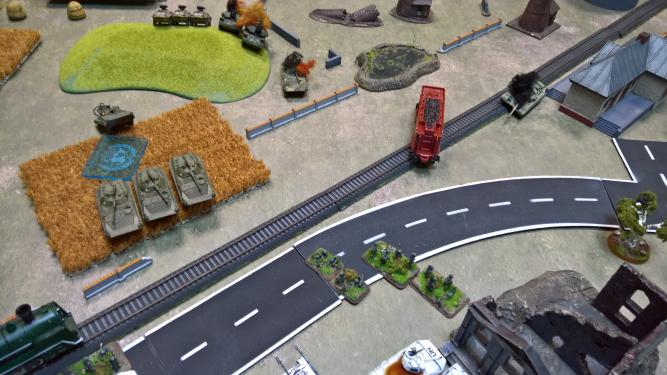 Only one successful shot from Milan finished off the last enemy tank. 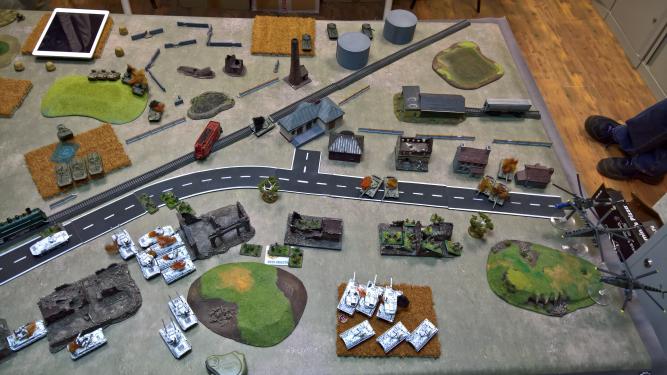 But catastrophe was inevitable .... 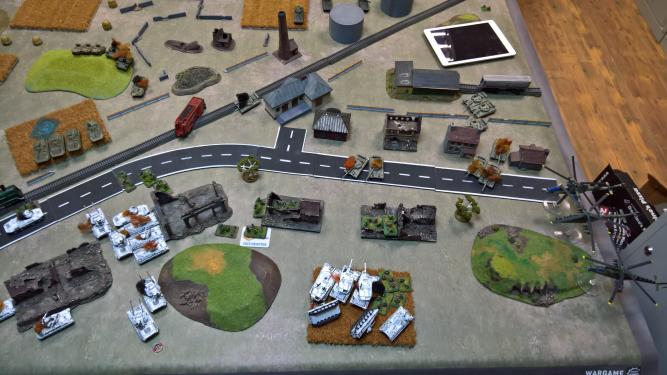 Seeing that the last Leo-2 was still trying to get back to the battle, a detachment of Soviet infantry jumped out of the ruins and fired at the Marder's from their rocket launchers rushed into melee. 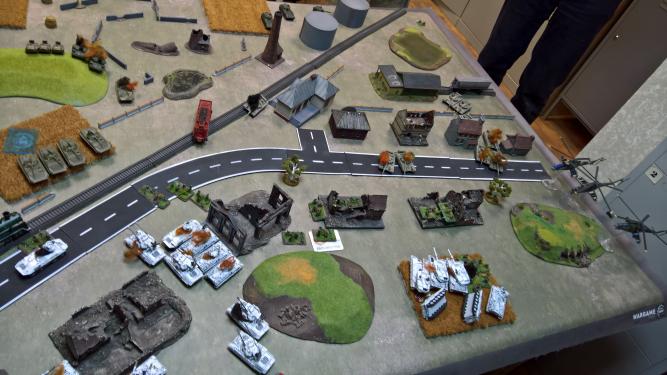 The tank of Captain Irwin shuddered at the new explosion and the captain ordered to leave the tank. But to his horror the first thing he saw opening the hatch was the butt of Soviet AK that was smacking him in the face. 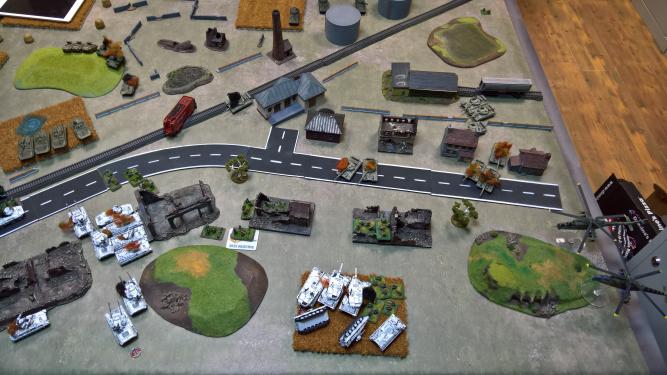 "Shoot from all that you have!" Sergeant O'Donovan shouted as he saw Soviet soldiers quickly pulling out the stunned crews of their Tanks and Marders and skilfully dropping them on the ground starting immediately to bind. 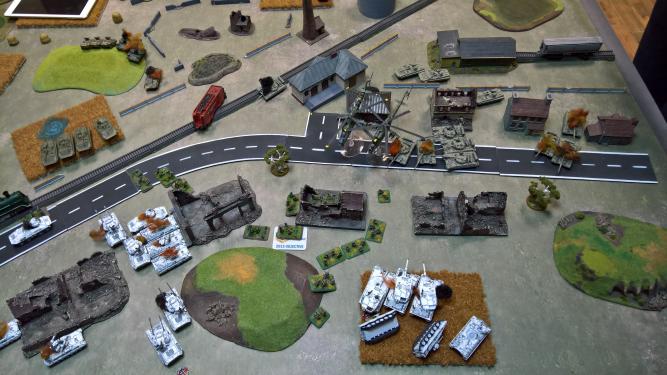 But at that moment to his horror from the ruins appeared new tanks of the Soviets and the enemy infantry leaving several soldiers to guard the prisoners rushed to the positions of the right-flank squad of White Elephants. 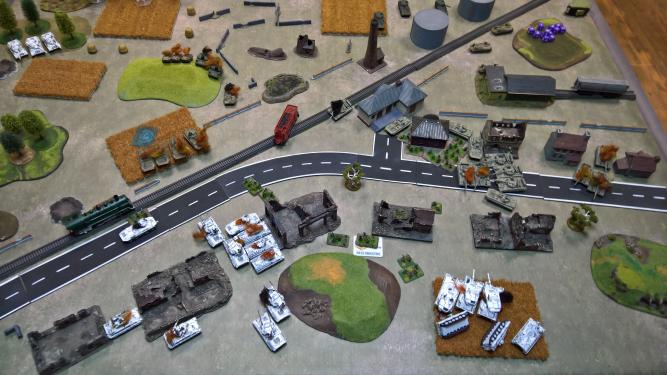 "Donovan, this is Olsen, we're on the way. What's going on?" came through the interruption from the sergeant's radio while he crouched down from the enemy's fire reloading his Milan. "All is lost sir, you will not have time. This is the end. " answered Donovan looking how exploading a squad of BMP all the while pushing their left flank. "You clear way, order the second platoon to retreat. We will cover them." 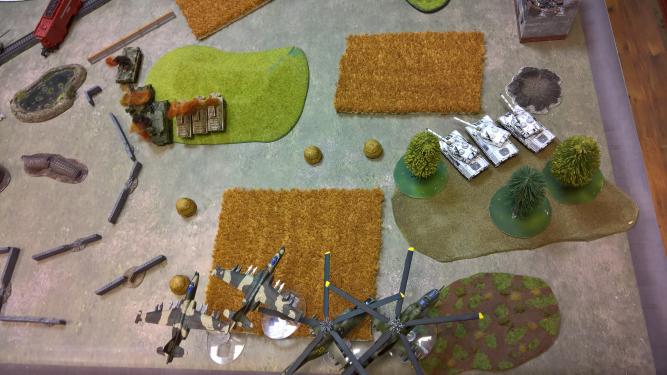 "Damn, no!" shouted in the radio, Captain Olsen. "Does anyone hear me?" but contact with the first platoon was lost. "Second platoon retreat to the forest, we are waiting for you." told Olsen the second platoon and at that moment the missiles from Mi-24 and Su-25 covered his detachment. 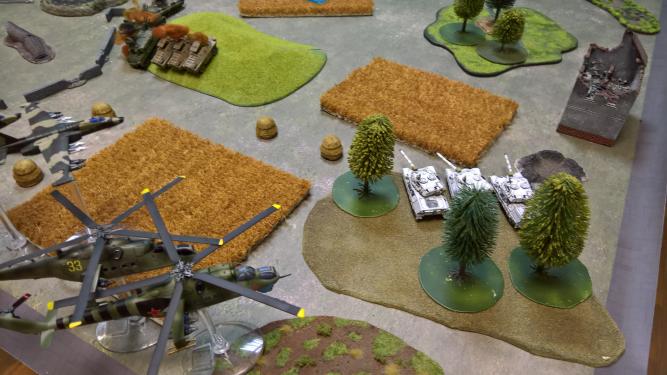 Olsen was lucky. The trees stopped the rockets and the helicopters deciding not to experience luck retreated. A minute later, the captain saw a group of wounded people in the uniform of NATO running to his tank across the field and with horror realized that it was two dozen people that remained of the entire combat group. Not delaying Olsen seated them on tanks and hurried retreat.

The time is 21 p.m.
Date – 21 August, NORTHAG HQ, Düsseldorf, North Rhine-Westphalia.
In the camp of the White Elephants there was a tense silence. In hospital, the wounded were bandaged and all the officers gathered in the headquarters tent to understand what had caused the defeat and loss of seven units at once.
The colonel was taciturn and extremely gloomy, his people shared his emotions but slowly and surely anger was engendered in them.

The time is 21.10 p.m.
Date – 21 August, NORTHAG HQ, Düsseldorf, North Rhine-Westphalia.
Women's heels began to clink on the checkpoint. It walked through the camp and looked into the infirmary for a minute, visiting the quartermaster and resolutely approached the HQ tent. Two guards snapped to attention, and the clatter of women's heels moved into HQ tent breaking grim meeting.
Lieutenant Nielsen stared at the tall, beautiful middle-aged brunette in uniform of army intelligence which entered without an invitation to the headquarters.
He opened his mouth to say something, but his eyes slid down on her badge, and all the questions immediately froze in his head.
- "Colonel Daughter,- said the brunette, - I have good news for you.-
The colonel winced and turned slowly.
- I'm listening to you Colonel Dolch.- he answered the brunette.
"My God ...." thought Nielsen. "A photo frame on his desk ... it can not be that that women is his wife ...."
- I have two news for you, dear. - smiled the brunette. - first, you are again an independent unit under the auspices of the High Command.
She shifted to the side, pointing to the resolute-looking captain of the Bundeswehr who was behind her.
- The second is that it's Hauptmann Wolff, and he knows where the Soviets took your people away.-