The battle that just never ends!

This battle played out at 60pts and was meant to be the first of multiple games in an evening....this was NOT the case. We fought over everything and by the time we called it it was down to bare bones. Both sides losing lots as well as shelling out the hurt. Table selection was dictated by a friend of ours and he went terrain heavy which slowed the game down to a crawl. I lost track of the turns as we just slugged it out both refusing to back down. The Soviet forces held strong and the Germans were able to recover an almost lost objective. Hard fighting, as will be seen in the photos and looking forward to the next one. Hopefully it won't wind up taking up all of our time and leave no time for other games. 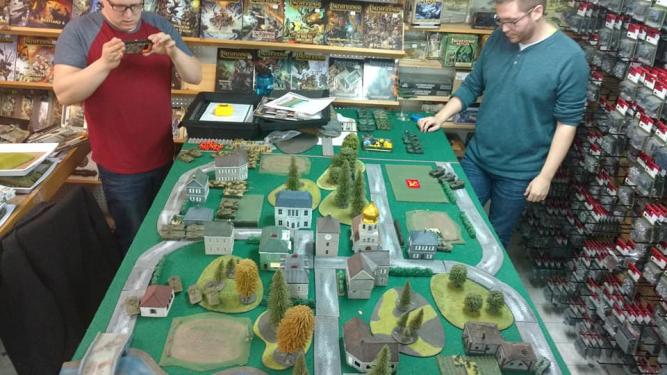 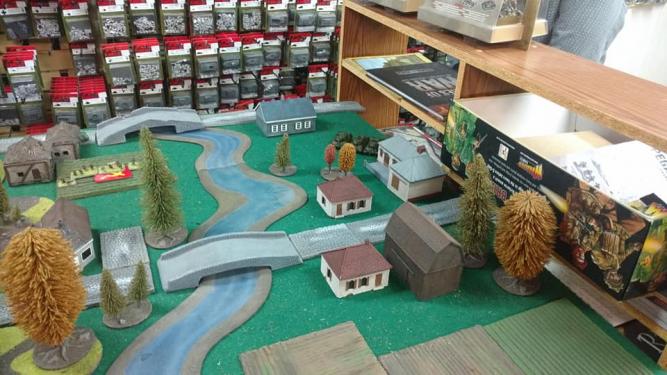 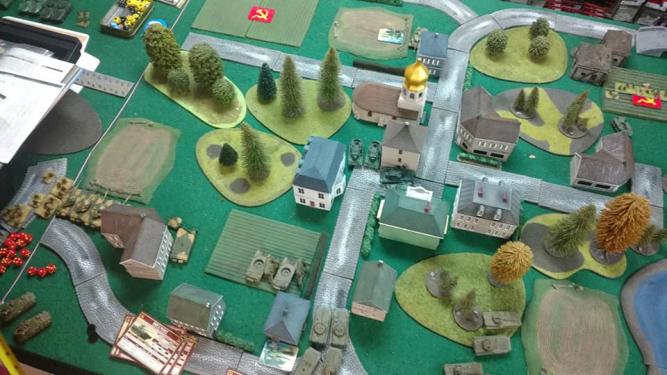 Gepards roll up to silence Soviet AA capabilities. The Luftwaffe arrived to nuke one squad of T-72s ( only one wreck remained) 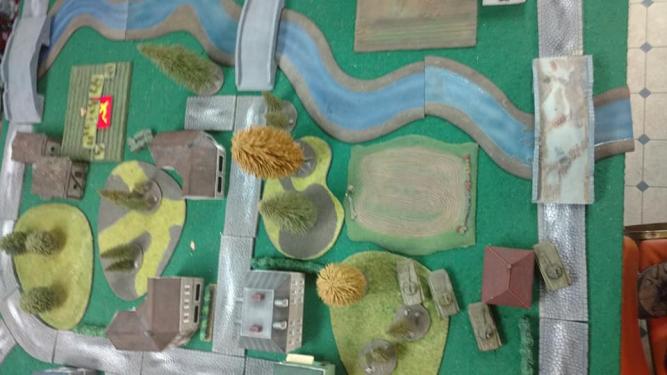 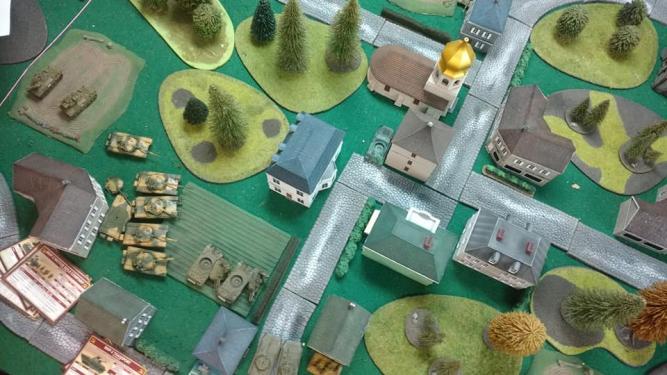 T-72s respond with swift firepower killing one and forcing the rest of the Gepards to flee due to bailing them. 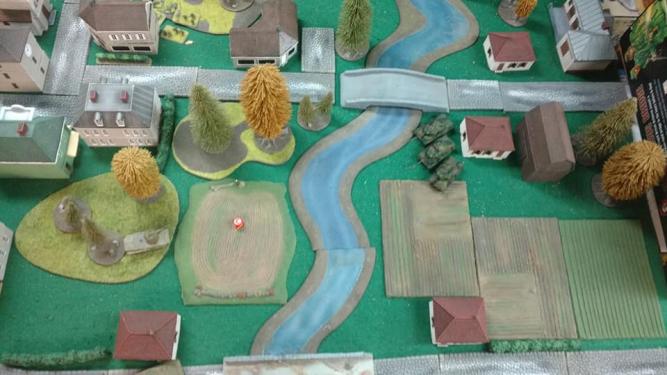 Leopards roll up to smash the BMP wall forcing the broke unit to flee. 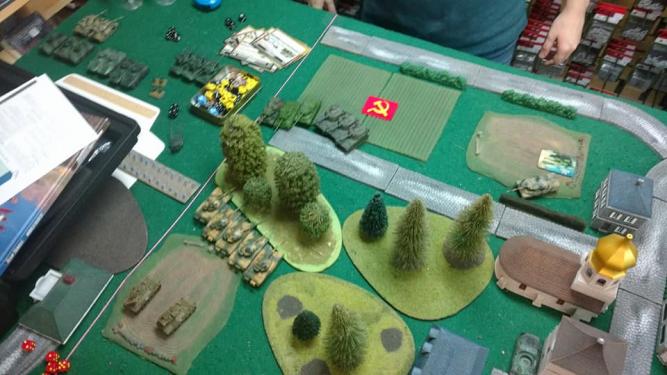 Afraid of being flanked the T-72s roll up to deny and prepare a nasty surprise if the bold Germans try to push. 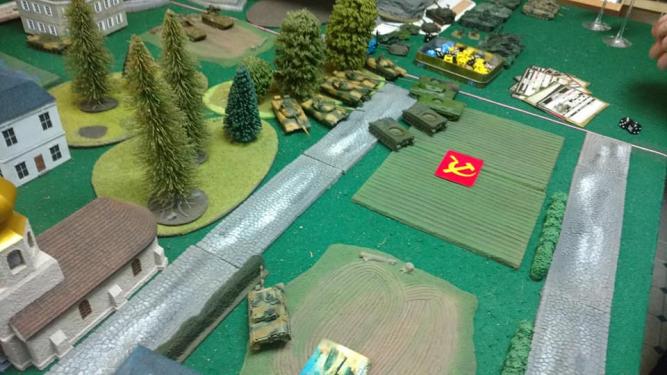 Bloodbath! Only my CO and one Leo who passed his check is still around. Not a good day for morale checks all around. 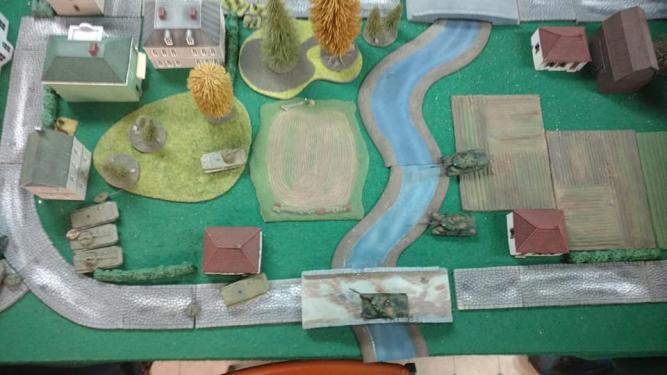 Leopards roll up to finally break the BMPs but miss all shots with the exception of one bailed! 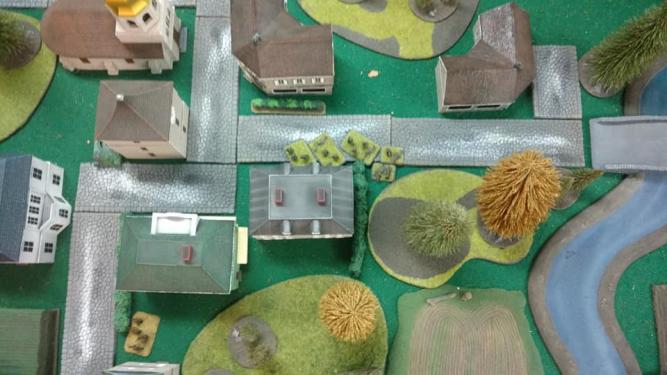 German infantry push into town. ( Note the Soviets not even a block away) 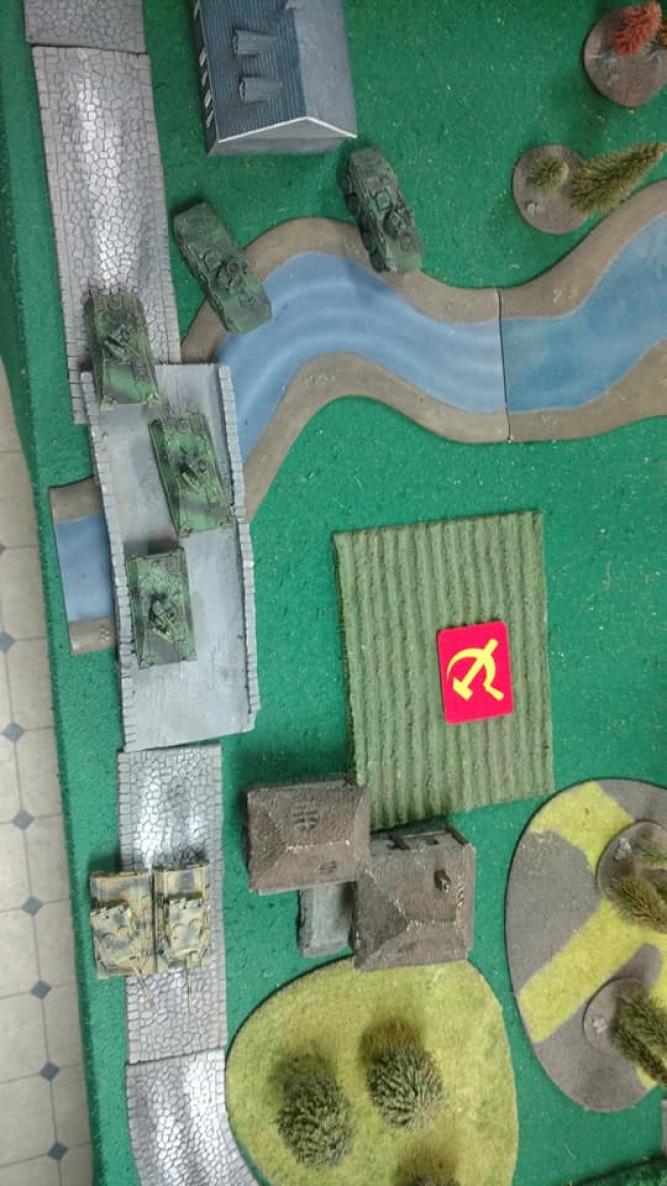 German Reserves finally start pouring in from the other side of the table and haul ass to get into the action. 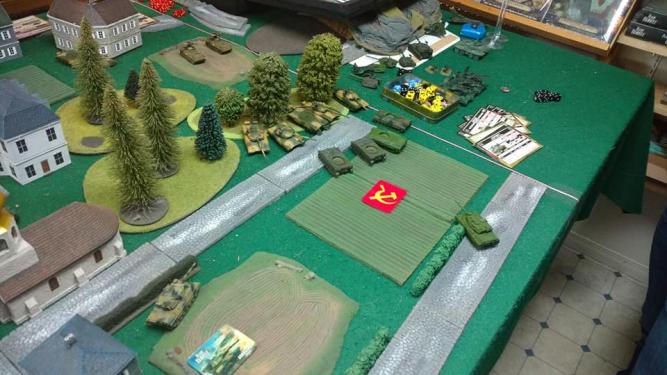 Desperate fighting as the Germans try to hold back the tide until more support can arrive! 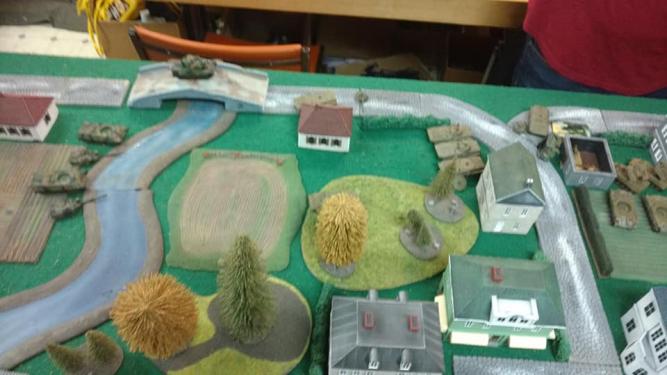 Blurry shot of a lone Leopard holding the bridge after the BMPs clapped back killing two of his brothers. Missed Dice Cost Lives! 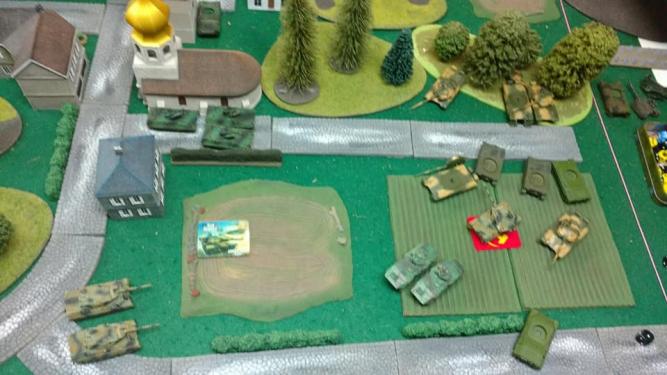 All hell breaks loose as all reserve units are forced to push to contest and hold the objective! 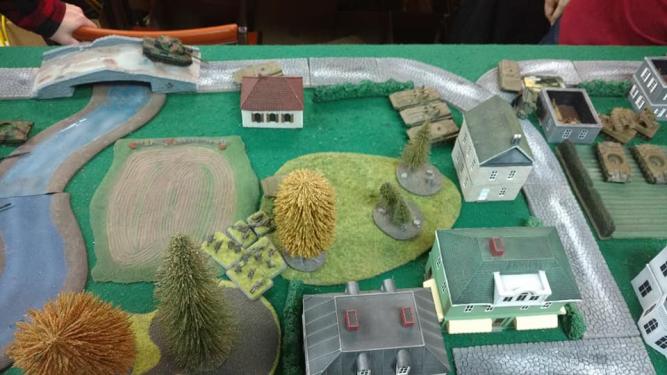 German infantry moving up to support the Leopard on the bridge 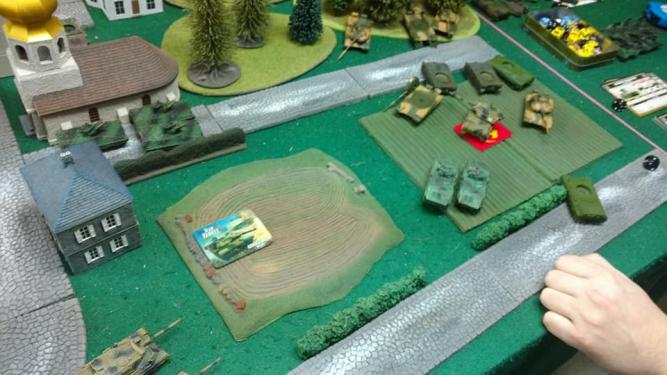 Marders push up to as the Leopards move forward to engage and knock out a few T-72s contesting the area. 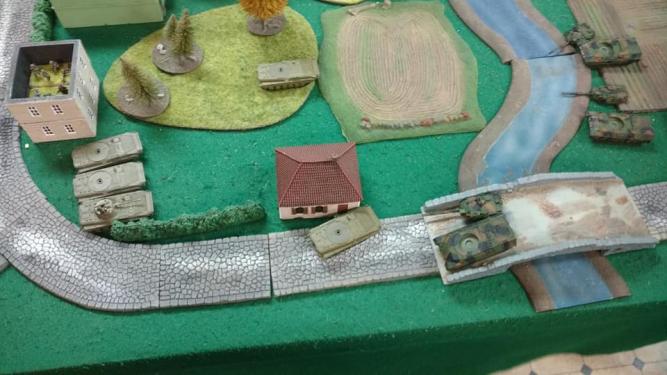 The final flanking Leopard is claimed! 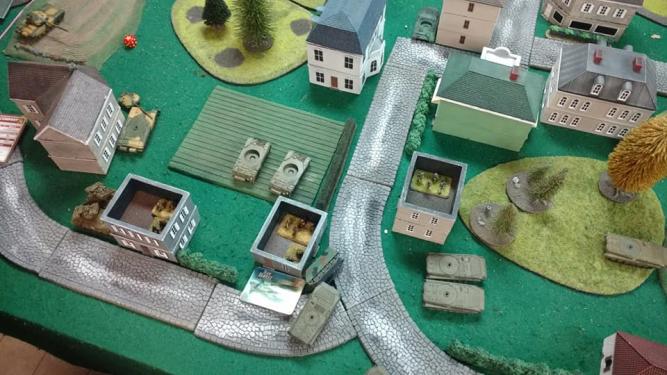 Brutal cityfighting erupts. Building to Building contact, both sides refusing to back down. The name "Stalingrad" is uttered about 20 times in a single turn. 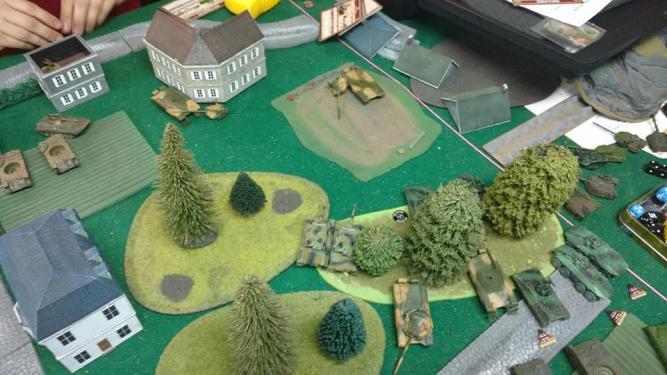 Germans realize they must push to encircle or claim the objective. They manage to push back a lone T-72 who is promptly dispatched by a Milan team further up. 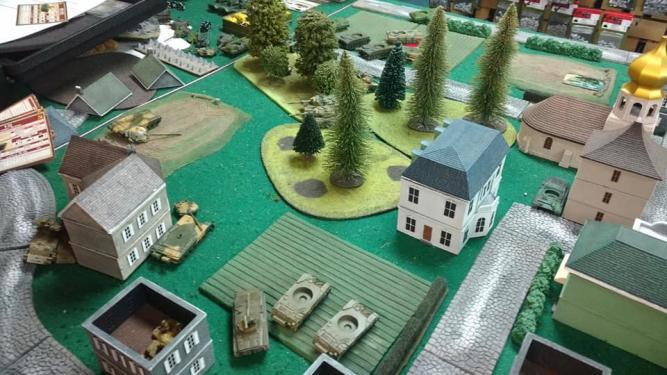 Marders broken by the shots of BMPs and Infantry missiles! Leopards close up behind to attempt a flank on the lone BMP 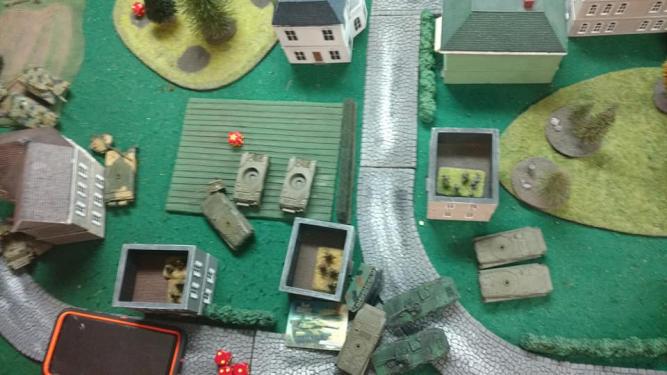 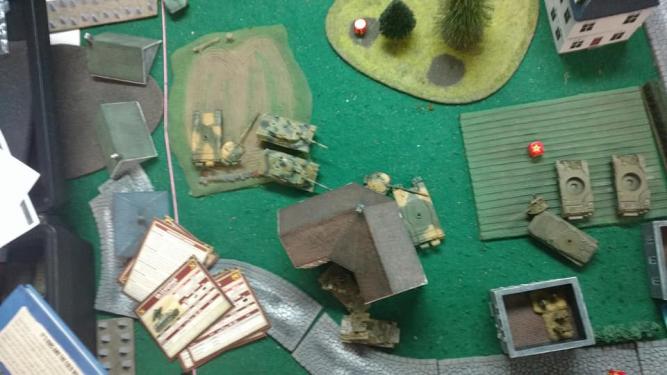 Leopards crawl up to murder a BMP and put some pain into the Soviet infantry. 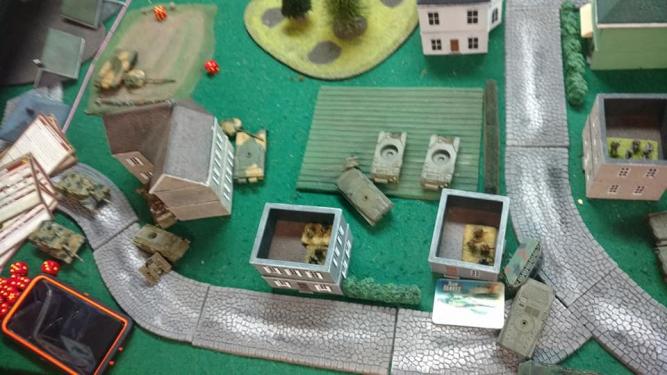 Leopards outflank the Soviets and try a few potshots to no real effect. 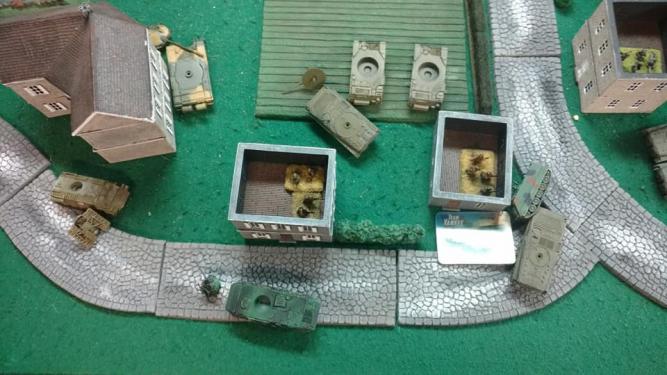 Luchs try to break the AA group but fail to, after which they are promptly dealt with my Soviet Infantry. 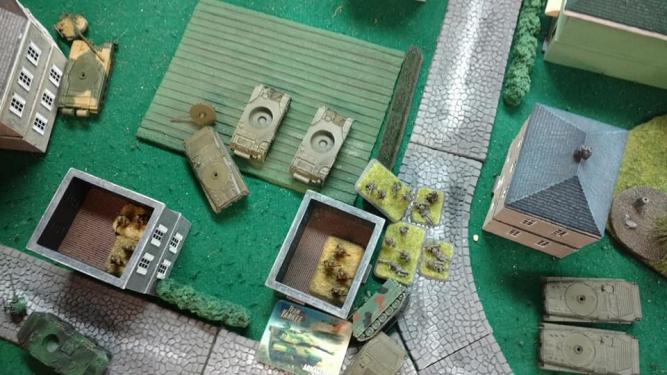 The brutal cityfighting assaults break out! 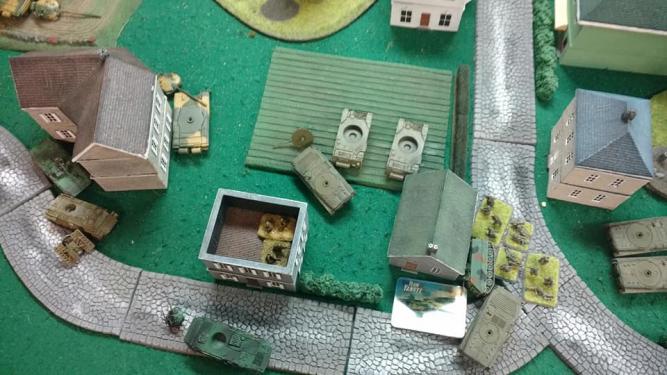 German infantry crawl back after the successful assault to cover from the building the Soviets occupied. 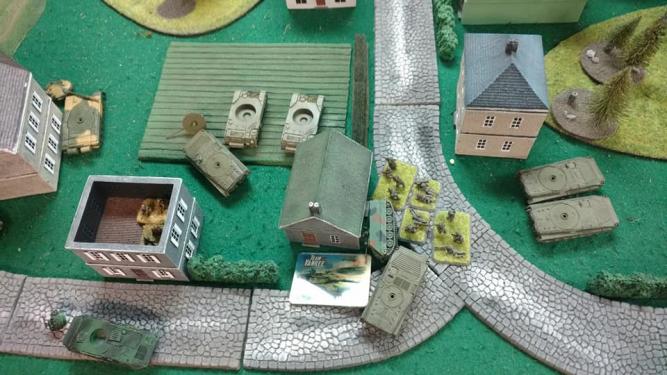 Both sides battered and time running out we called it. 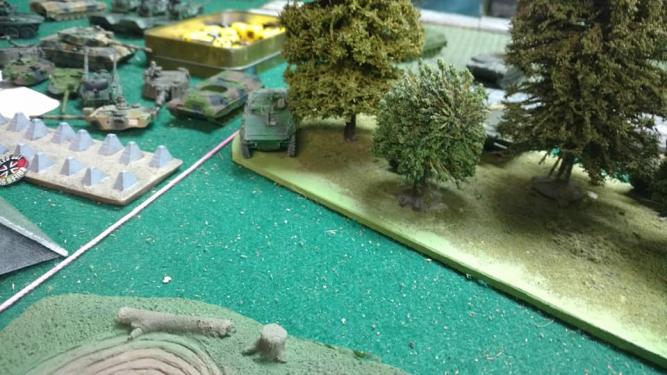 A lone unbreakable Luchs sits under his favorite tree and ponders if pineapple truly does go on pizza or if the Americans are making that up. 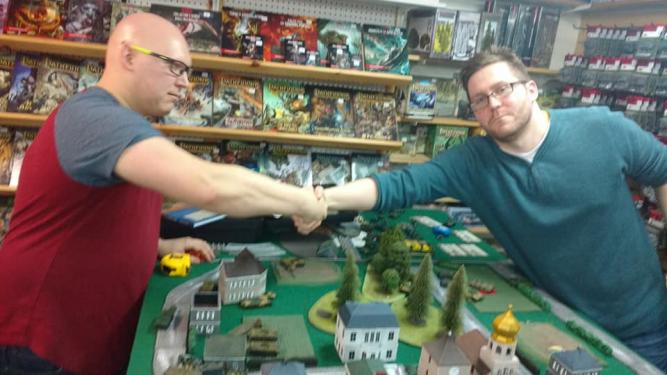 This battle was HARD! Like if we were in a tournament we would have both lost anyway. The game went on for no less that 12 turns with terrain hindering both sides as well as aiding. The congestion of buildings was a welcome change but it was just carnage at close quarters. Both sides were rolling rather poorly for morale checks (with a couple exceptions). We both agreed that next time we will probably get our table designer to take it easy on so much terrain. We were both bogged down by Cross checks which made the game grind on for many more turns than we wanted to play. I tried the artillery and the fliegerfaust group to no avail. I don't think they will be making it back into my future lists, I'd be better off just taking more groups of Leopards or shoring up the ones I have to 4 strong (HINT HINT Phil and Wayne)