Striking with the sun at our back in Frankfurt

My 64 point VA force consisted of a T-55 KO, and and Motor-shutzen KO. Mike played a US M113 Mech Combat Team which ended up being 71 points when I entered it in a list builder for this report. 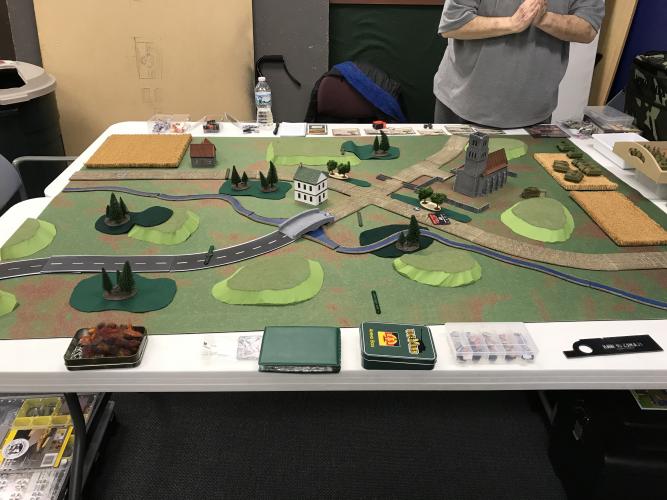 A crossroads in a picturesque rural area near frankfurt

Mike and I used Battle Plans to select a scenario. With him selecting Defend, and me attack we ended up with No Retreat. Mike chose to defend the right end of the map containing the church. His objective ended up just beyond the small hill in the center, and I placed mine on the road between a treeline and the stream. 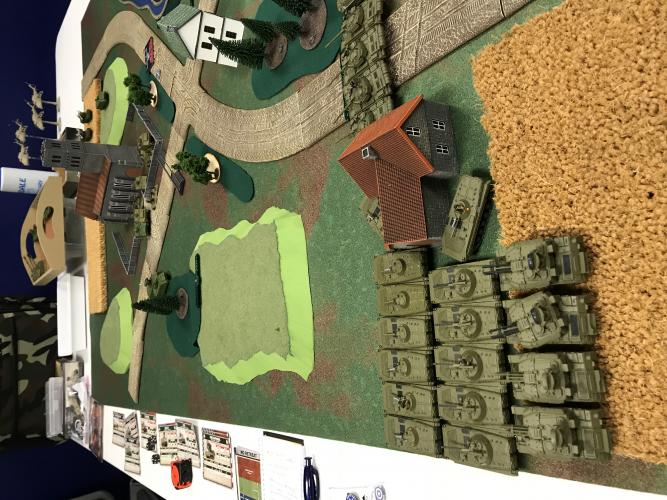 On my left I placed the two BMP units the Shilkas, and their attached T-55 KO. Facing them were a scout section and a Mech platoon deployed around the church. (sorry for the sideways pictures. I tried editing them and saving the rotated versions, but kept getting the same sideways results.) 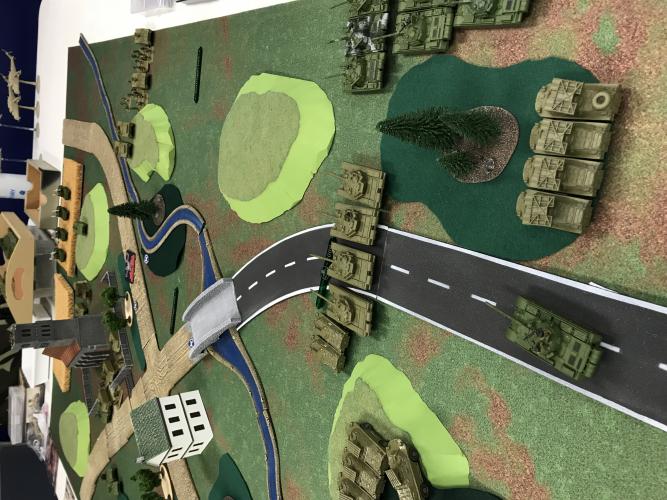 I the right I placed the entire T-55 KO. The two Spandrel units are deployed in overwatch on a small hill in the center. Facing them is a lone Mech platoon. Deployed at the center rear of his position is the Chaparral AA unit. 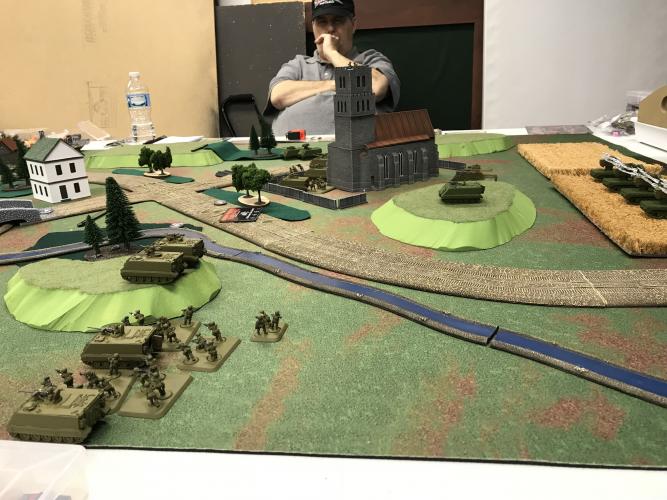 Mike placed a single minefield to block the bridge, and two other ones in front of the near objective blocking direct access. 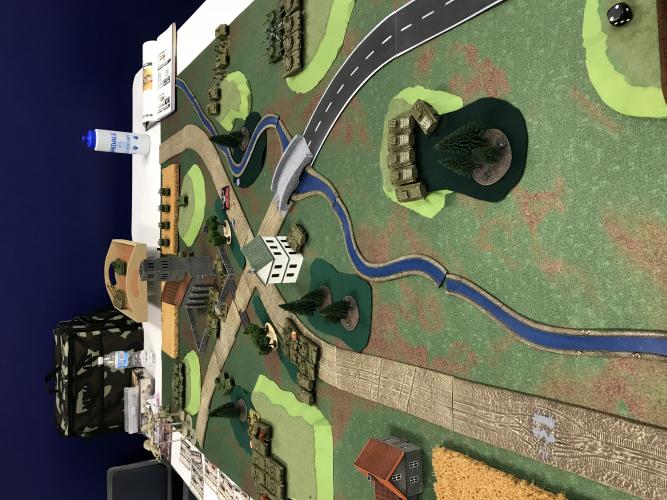 One turn I moved the Hinds and their dismounts to a location just out of his sight behind a hill and landed. All of the other units moved forward in the darkness.
On the American's first turn they received a reinforcing tank platoon which scattered the hinds like a flock of Geese with the troopers still inside. Their AA fire was not effective, and thankfully the Chaparrals could not see them. The M1s could see the BMPs, and eliminated three of them. A dragon gunner eliminated a fourth. Artillery landed on the attached T-55s, but was ineffective. 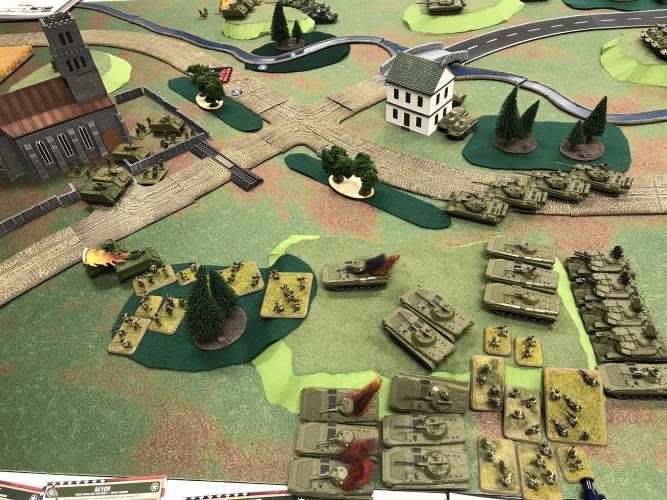 On turn two the BMP-1 dismounts assaulted the scouts, and eliminated them. They lost two stands in the process. The BMP-1s had pulled back, and the BMP-2s launched missiles at the M1s. only one hit, and failed to penetrate. 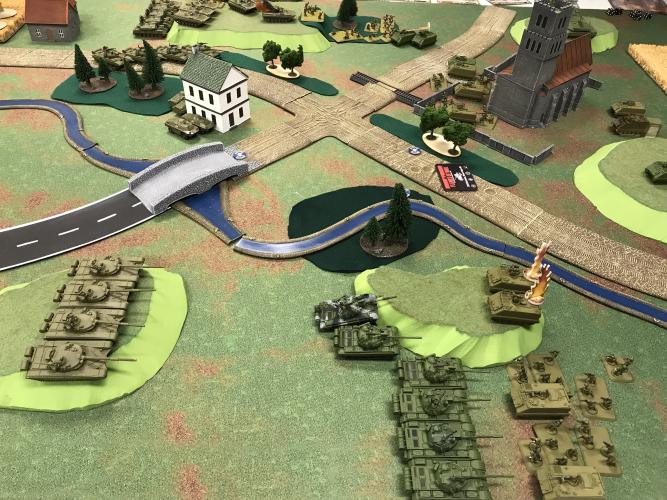 Time to grease the treads of our tanks...

On the right the tanks continued to move forward. They were able to kill the two M113s with Dragons mounted. The Hinds scurried away and landed in a wheat field out of sight in the hopes that the Chaparrals could be eliminated and free them up. On turn three everyone that could opened up on the infantry and pinned them, but they unpinned on their turn as the sun rose behind me. Unfortunately it did not effect the aim of dragon gunner that downed a T-72. 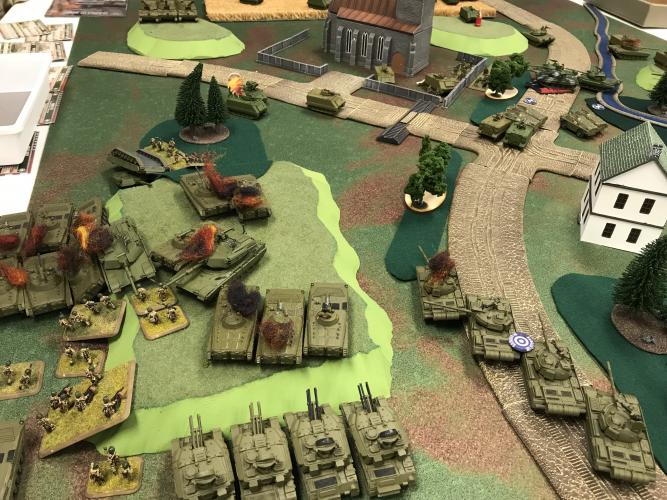 Bloodbath on the left.

Over turns three four and five a huge melee developed first over the wood, and then over the hill. The M1s charged forward, and eliminated the BMP-2s with tank fire. Then they assaulted the infantry in the woods, killed all but four stands, bailed one tank, and then failed a counterattack roll so one M1 was destroyed. On that same turn the American artillery dropped mines on the attached T-55 KO pinning them in place. A dragon gunner eliminated the one visible T-55.
On turn four the FIST track was taken out by an AT-3, and the dragon gunner in the church tower was as well.
On the American turn four the M1s returned and attempted to eliminate the BMP-1s, but only managed to kill two of them. The M1s then opted to assault the BMP-2 dismounts, but were only able to bring two tanks to bare due to the wreckage on the hill. The RPGs failed to have any effect, but the nearest T-55 ended up just inside of eight inches of one of the assaulting M1s, and brewed him up with a miracle side shot. The assault went back and forth for several rounds. It ended when an RPG team was able to bail the M1 out. In a crazy reversal of fortune, the infantry only lost a single stand, and the M1 unit broke fleeing the field.

The right hook lands a blow 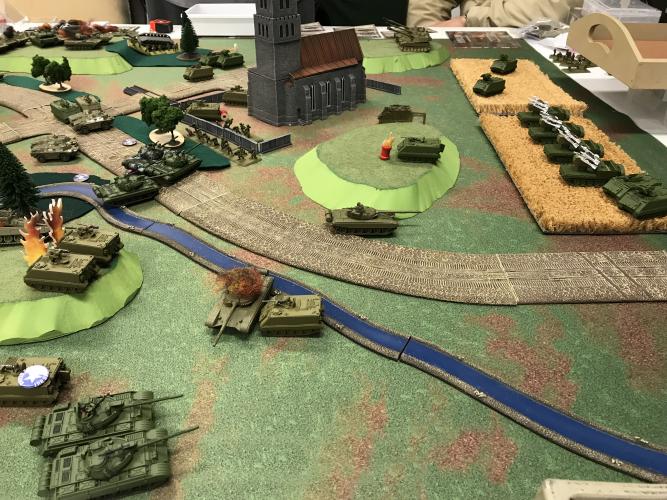 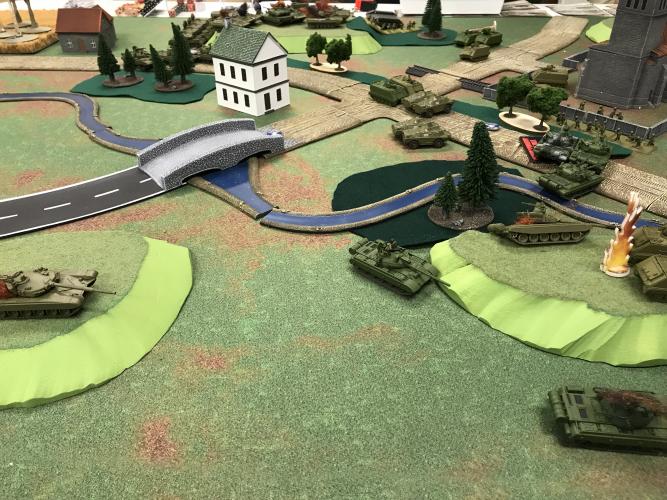 Over on the right turn four saw the nine remaining tanks smother the American infantry with MG fire, and then assault. The first T-55 KO lost a tank and eliminated several stands of infantry, but the enemy broke off. The T-72s assaulted next with the same results. They consolidated to the hillside behind the burning M113s. The american infantry failed their moral check and fled.
The Americans killed a T-72 with a TOW missile from the newly arrived scout section, but the last tank stayed in the fight.
On turn five the full strength T-55 unit occupied the objective, and the two BRDM units moved forward from cover to over-watch them from the other side of the minefields.
On the american's turn several M113s flanked the far section of BRDMs, and the church defenders moved forward to assault the T-55s. One BRDM unit was eliminated. Massed MG fire from the remaining defenders knocked back the American infantry eliminating several of them. Mike conceded at this point. 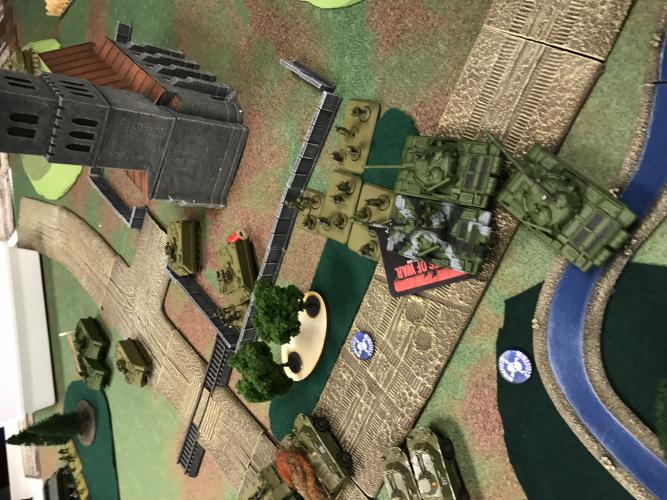 This ended up being a bitter struggle on both sides of the board. As the HINDs took no effective part in the battle it was 49 points of my troops against over 65 of his for the better part of four turns. I'm done with air again for a while, and will be adding the artillery back in, as well as beefing up these fragile T-55 units.