Smashing the screen at Hof

Smashing the US 2d Cavalry's screen at Haidt 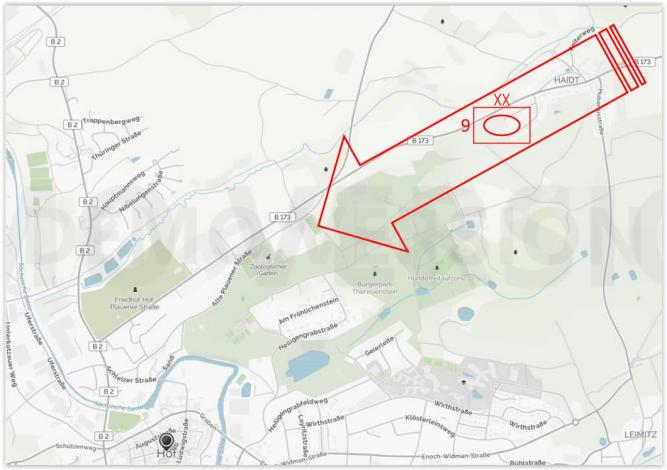 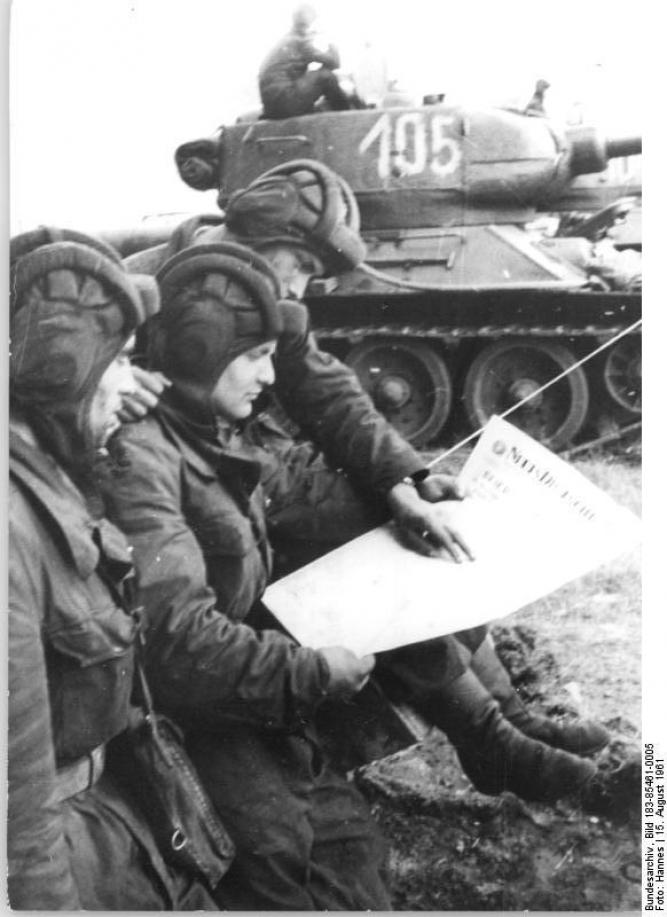 The command group scans the latest news from Pravda about Warsaw pact victories all along the front.

The sun climbed higher behind formation of armored vehicles burning off the morning mists. The command group of the fourth Panzer Battalion was gathered around a burned out old T-34/85 from an older battle. Oberleutnant Gruber stood listening to the BN commander who was walking through the terrain map sketched out on the ground. He described the situation that the regimental scouts had firmed up during the night. Elements of the US 2d Cavalry were screening the flank of the 1st Armored Division that was pushing North East towards Leipzig. The VA 9th Panzer had been ordered south to cut the NATO supply lines for the units attacking in East Germany . Gruber's regiment would be leading the attack near a town called Haidt. The panzer battalion would be attacking to the East of the town, and the bulk of a supporting Motor-schutzen battalion would be the primary attack through a built-up area to the west. 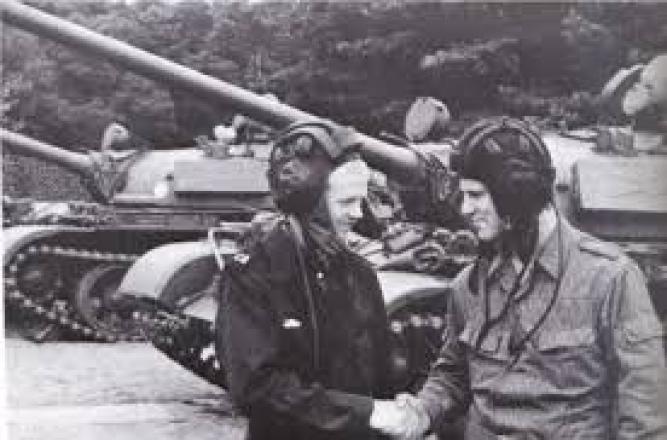 As the briefing was ending Gruber was staring at enemy positions on the map. The reports of expected enemy elements included Cobra helicopters. These had devastated tanks in his unit in the last few days, and he feared that he would soon be the next victim. Standing next to him was the sergeant in charge of the newly arrived SA-9 air defense unit now supporting his unit. The sergeant asked him what he was so serious about, and Gruber explained his experiences with NATO air assets. A cheshire cat grin spread across the sergeant's face as he shook Gruber's hand and told him "Fear not Oberstleutnant. I will make it rain destroyed enemy aircraft. I will be hunting the hunters." The man's confidence was infectious. Gruber returned to his T-72 company focused only on the damage that he would inflict on his foes.

The setting and plan of attack 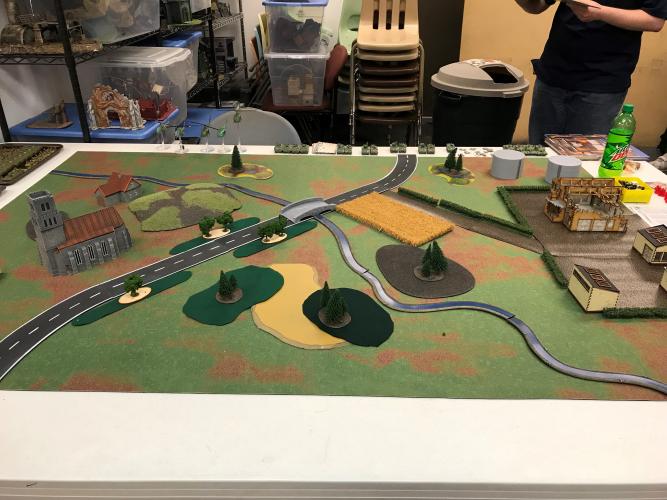 The outskirts of Haidt

The Motor-shutzen unit lead the attack. Their BMP-1 company sent their dismounted infantry pounding toward some oil storage tanks in the distance through a heavily damaged factory. Their AFVs began engaging some enemy AT assets hiding in a patch of woods o the south. Frustratingly none of their missiles found a target. 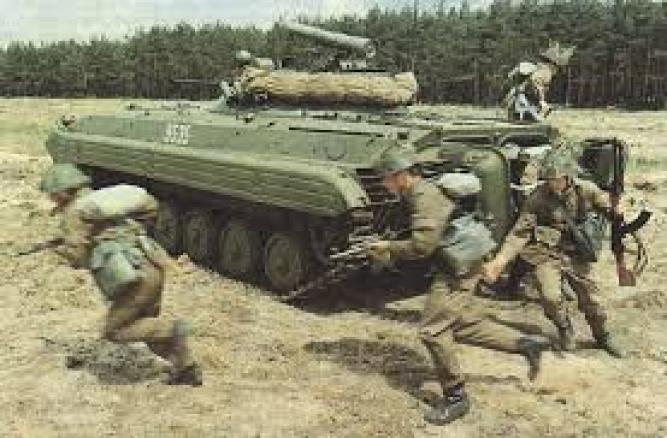 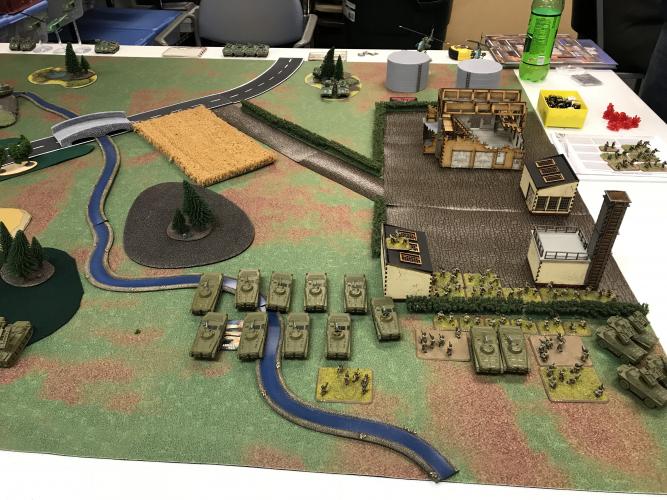 To the East a smaller company of Motor Schutzen truppen dug in north of a church while their AFVs, and an attached AT platoon of Spandrils deployed to their west. They could just make out a hill behind the trees lining the road leading to Haidt. Between the infantry companies a BM-21 rocket battery deployed. Protecting them from air threats were a battery of SA-13s. 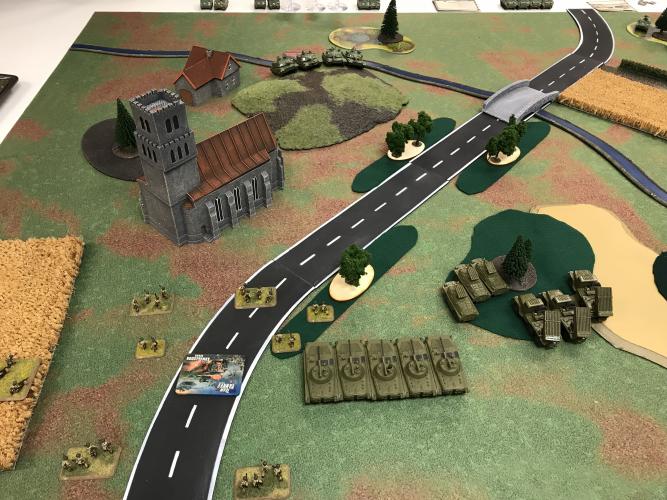 Supporting attack waiting for the armor to come up.

In the east the BMP-2 Motro-schutzen Kompanie spotted four huge boxy shapes on the crest of the ridge line to their front. The order to fire was given, and several volleys of AT-5s flew out with many scoring hits, but no effect could be seen. The BM-21s dropped a volley of rockets on them as well, but again no damage was observed.
These tanks then moved over the crest toward the M-S Ko and fired. The attached AT platoon was destroyed. Their surviving crews fleeing in panic to the rear.

Gruber gets stuck in 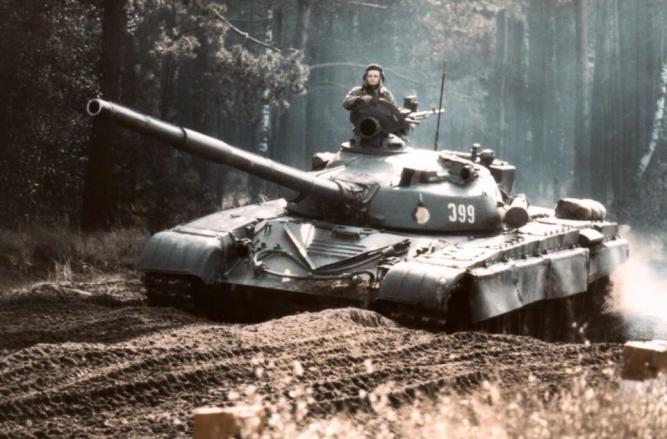 Gruber's radio on the company net crackled to life as his commander ordered his company forward. As his commander followed in his wake his tanks moved up quickly through the dismounted infantry. He could see the enemy tanks that had moved forward to engage the AT platoon. Just before he ordered his men to fire, the AFVs fired another volley of missiles. More hits on the enemy were noted, but no apparent damage was done. It was up to him. He ordered his men to fire. Five deadly metal darts flew at the enemy, and four found their mark. One tank was enveloped in fire, and he saw the crews of two of the other vehicles scrambling out. As he ordered his men to reengage the remaining undamaged American tank fled.
In the distance to the Southwest Gruber spotted a pair of enemy attack helos. He reported them, and was expecting to see telltale missile signatures streaking straight at him. Just as it looked like they might be raising up to fire several volleys of missiles streaked toward them. The sergeant's confident boast and grin came back to him as he watched the two helicopters explode and disappear behind the fuel tanks. They were quickly replaced with two large columns of oily black smoke. 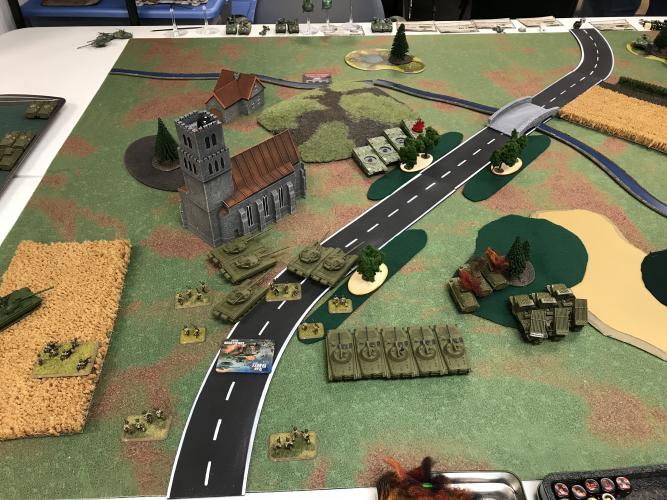 Gruber's company lands a hay-maker on the enemy tank platoon.

As Gruber was fighting his fight, he heard on the command net that the infantry attack was still stalled as the men regrouped in a nearby building. Fire from some of their supporting AFVs was directed at the enemy VADs, and the AT units, but only a single vehicle was damaged. The infantry commander radioed in a request for supporting fires, and skillfully guided the rocket barrage directly over the enemy units. This fire destroyed another ADA track, and the rest of the platoon fled south in to the distance. 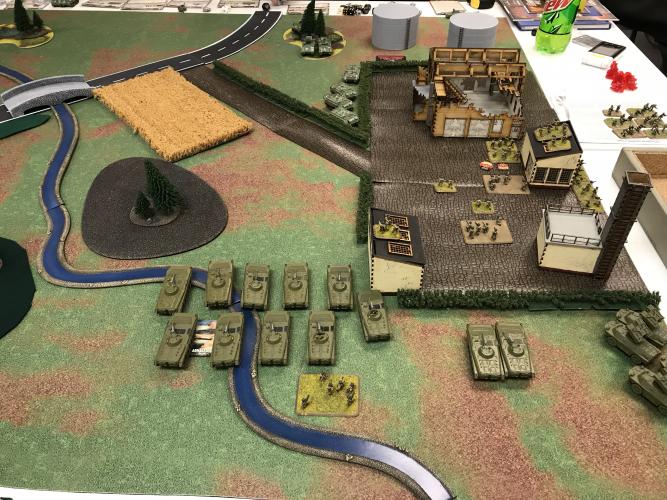 Infantry regroup as the VADs are seen off.

Keep them on the run

Gruber's commander raised him, and badgered him to keep pressing his force to the south to secure the high ground. As his tanks began moving Sergeant Kirche's tank came to an abrupt halt as the turret flew skyward. More sad letter for him to write. On his right the BMP-2s press on down the highway. 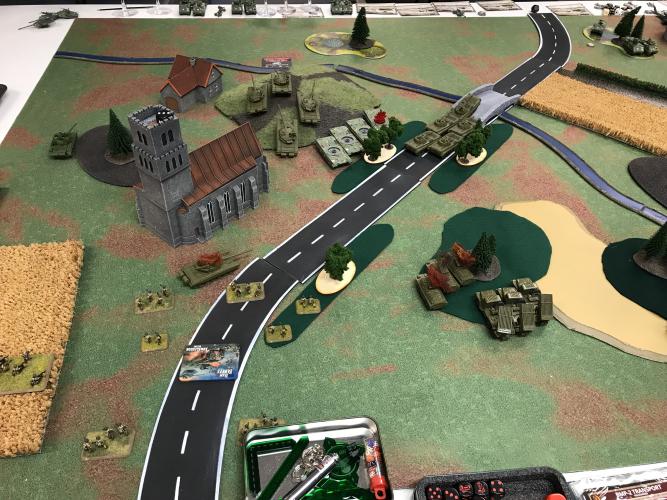 Gruber keeps his tanks on the move

Over the command net the report come in that the main attack is moving again. He also hears the cursing from the Motor-schutzen commander as his AFVs again fail to hit the elusive American TOW unit. He had forgotten to switch back to the battalion net. 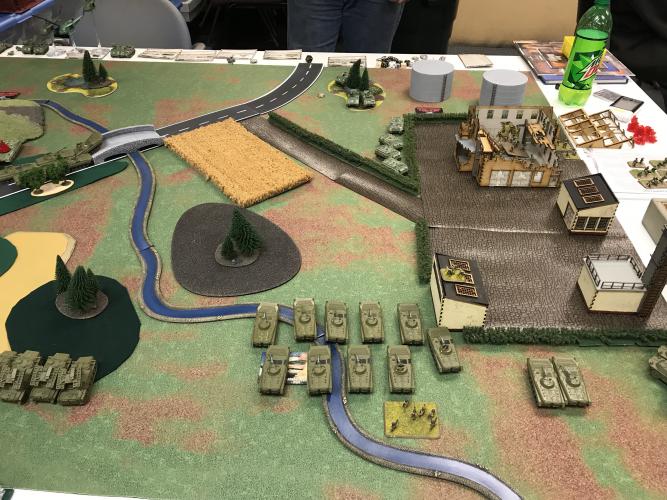 The infantry gain ground as their supports miss again.

Gruber's company consolidated south of the hill as ordered while the remainder of the battalion closed on his position. 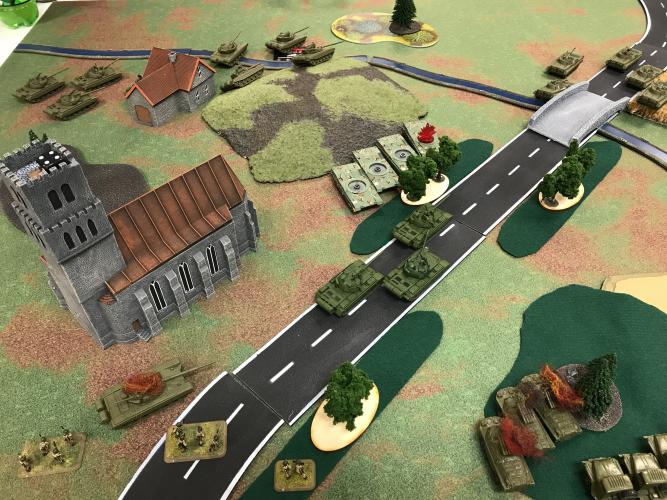 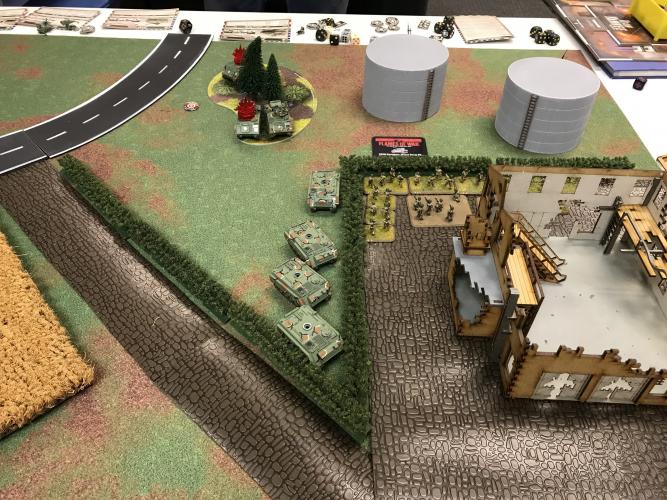 Good news comes of the main thrust as well. The infantry have taken the factory grounds, and along with their supporting AFVs have finally managed to hit and destroy the last American defenders. While waiting for orders to move south again, Gruber and his crew are given a gift from one of the daughters of the farmer whose farm he had just liberated. This damn war must end soon he though, as he smiled at the girl offering him flowers. Very soon.... 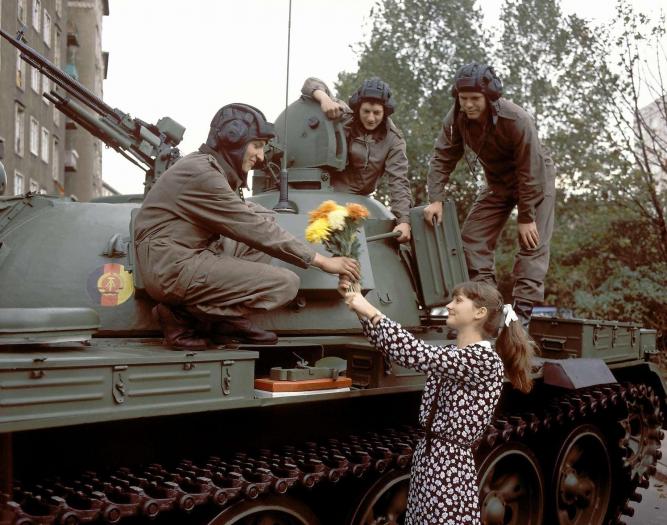