Major Pilsner was falling asleep in his BMP turret position as his force continued to press the fleeing British. His men had been skirmishing with the enemy all day. As the sun was setting in the West he began to approach a ridge-line, with a valley off to the NE.
He ordered a halt, and crested the ridge to survey the terrain in front of him. He saw that the ridge hooked to the North in front of him, and then bent back to the NW. Directly to the right of the ridge was some no-go terrain for his tanks, and then a built-up area further to the NE. Since any movement through the built up area would be covered from the northern end of the ridge that he was on, and with the lack of any good concealing terrain, he chose to move his force up the west side of the ridge using it as cover for the RS of the attacking formation. He would deploy his artillery assets south of the ridge and cover them with a section of SA-13s.

The bulk of the VA force deploys near the ridge-line.

Pilsner ordered his second Motor-Schutzen Company to the east to cover the area, and act as a decoy.

The BMP-1 Company takes up covering positions to the east.

Once the lead elements were in place, Pilsner ordered his lead tanks, and BMP-2s forward. His attention was immediately drawn to the conflagration his BMPs, a tank platoon had just transformed into. Once again a lone platoon of enemy tanks, along with some sort of missile launching vehicles had appeared on the far ridge-line. There also appeared to be enemy infantry dug in on the ridge as missile contrails appeared from there as well. 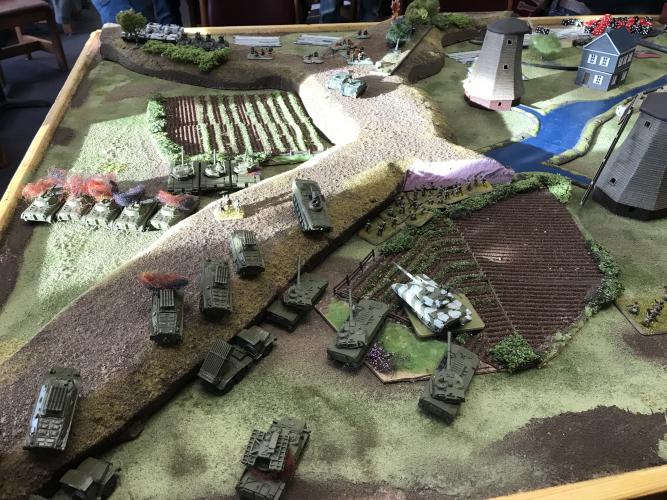 On the left enemy missile fire began to engage the BMPs from the buildings, and four FV-432s charged forward with MGs blazing. These were quickly seen off, but the losses of BMPs quickly began to mount. 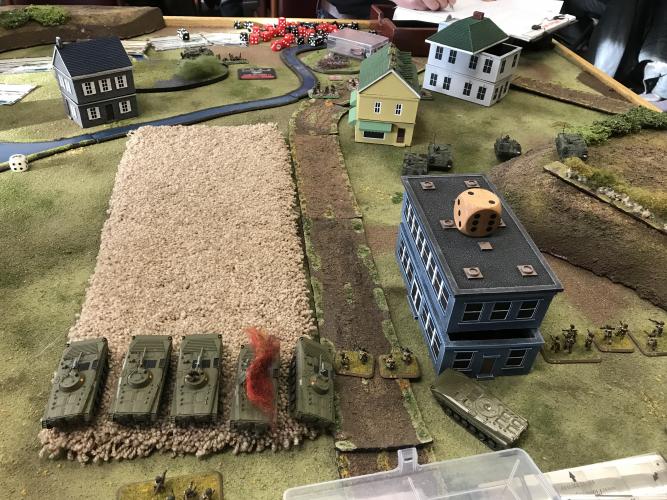 Skirmishing on the right flank

The fight was raging to Pilsner's front. He fed in more reinforcements to his attack on the left. The fire from his forces never was as telling as the enemies return fire. Despite a torrent of artillery and rockets blanketing their lines the fire from the enemy infantry just would not slacken.
His calls for army aviation support were answered and a pair of HINDs maneuvered to the enemies rear. Then, just over the roar of his supporting artillery firing he herd a low rumbling to the East. Then he spotted the source of the sound. A flight of four attack aircraft were bearing down on his units behind the ridge. Missile after missile volley up at the attackers. First one, and then another of them crashed to the ground. The final pair, despite each aircraft being hit multiple time, continued to bore in. They flashed by to the West releasing a rain of destruction in their wake. Every one of his supporting unit was hit. His surviving SA-13 fled.
Darkness was fast approaching as he rallied his forces. His supporting missile anti-tank units finally landed a telling blow, as did the HINDS with two of the enemies tank brewing up, as well as one of the missile firing units. The remaining tank had a will of steel and remained in place. A group of the enemies transport vehicles moved forward to harass his infantry, and paid for their audacity with their lives.
Hoping to divert the enemies forces away from his primary attack Pilsner ordered some armor to support the unit watching his right flank. The fighting intensified there, and his BMPs were destroyed by a group of enemy light tanks which had appeared as the APCs were supporting a planned assault on the enemy dug in north of the buildings.
Just as he ordered another attack on the opposing ridge-line, the pair of jets returned, miraculously shrugged off multiple missile hits, and finished of his artillery, and his AT assets. The remaining T-72s from the Panzer company , and their young commander's vehicle became burning pyres.
As darkness began to fall, Major Pilsner order the surviving elements of his force to pull back. Clearly they would need to find another way in to Hanover.