Major Pilsner slammed down his radio handset in frustration. The headache that he had been suffering with all morning jumped in intensity as he took the report from his reconnicence platoon leader stating that once again he had led his unit far from where he should have been.
Across his front he observed Autobahn Seven to his west running from the north to the south. Just to his front right were the outskirts of Mellendorf. Pilsner’s Motor-Schutzen Battalion along with a pair of supporting Panzer Battalions were on the Northern edge of the Ninth Panzer division which was attempting to secure Hannover. Pilsner’s force had been engaged in a running battle for days with elements of the BOAR, and in particular the British 3d Armoured Division.
Pilsner had been driving his men hard and had pushed all night to arrive at his current location. He could see nothing on the far side of the Autobahn, but the absence of any civilian traffic, or civilians out for morning walks told him that there were NATO defenders in the area. He cursed his lack of reconnaissance assets, as he continued to scan the area.
All of a sudden, he saw a camouflaged figure appear in an open field, run some distance, and disappear again Out of sight. He checked with the commander of his second Motor Schutzen Company and was informed that there had been no enemy sightings. Figuring that the area North of Mellendorf was less lightly defended, Pilsner contacted the Oberleutnant commanding the Panzer Battalion directly supporting him and ordered him to sweep his tanks around the town and come down on the left of what he assumed was at most a company-sized infantry force to his front.
In preparation for this move, Pilsner ordered his attached 2S1 platoon, and a BM-21 rocket battery that was chopped for his support to begin shelling the area where he had seen the enemy movement. He then ordered his attached anti-tank platoons to take up positions where they could overwatch the tanks as they moved forward. He had his first Motor-Schutzen Company move forward of the artillery in to defensive positions where the BMP-1s missile could command the area south of the town.
Finally, he ordered Oberleutnant Saxe to bound forward parallel to the advancing armor to a location where they could also overwatch the main axis of attack. Saxe’s infantry would begin to infiltrate through the buildings in the Northern portion of the town at the same time.
Pilsner ordered the T-72 mounted Panzer unit forward, and then ordered his T-55 mounted formation to begin to close in a few thousand meters behind his position to reinforce any success.
In five minutes Oberleutnant Gluck radioed that he was across the highway and would soon be moving around the north edge of a patch of woods to beginning his pivot to the south. His radio call ended abruptly, and seconds later Pilsner heard the distinct sound of tank fire to the north.
Saxe reported in that enemy armor was firing from the edge of the woods. While his over-watching units were engaging the tanks, Pilsner requested aviation support, and soon saw a pair of MI-24s heading to the aid of the tanks.
In three minutes it was all over. The defending platoon of Chieftains were burning hulks, and the few surviving tanks of his advance guard were consolidating their position. Saxe was reporting that he could find no defenders west of the town. At the same moment Pilsner witnessed the enemy infantry element to his front pull back to their transport vehicles and flee to the south west.
It took a moment for him to recognize it, but Pilsner quickly realized that he had just pierced the thinly held screen of the defenders. This was the location for the reserve units to begin expanding the breach. He ordered up the T-55 battalion to begin the pursuit, and then reported his success to his superior.
Maddeningly all he received in thanks was a question as to why it had taken this long to take his objective, and another asking him why he was not pushing forward a greater speed. As he again slammed down the radio mike in anger, he was greeted by the sight of his lost scout platoon arriving late to the party. He took great pleasure in expressing his displeasure at the sergeant’s abysmal navigation skills with as many color expletives as he could manage. At least his headache had disappeared along with the fleeing Brits.

Pilsner's view from the left. 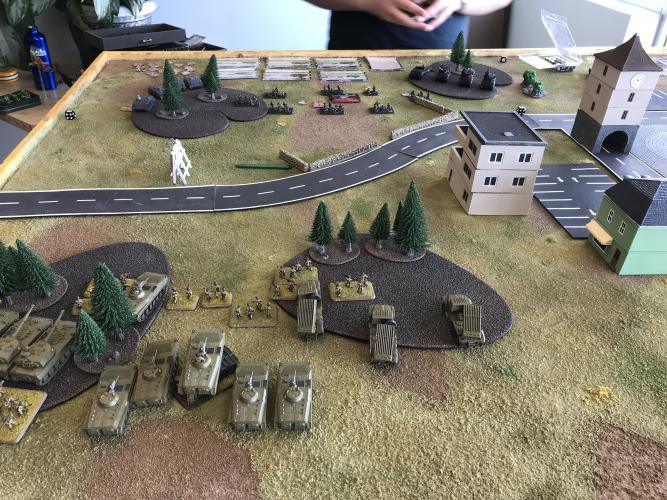 Tank assault on the right is ambushed... 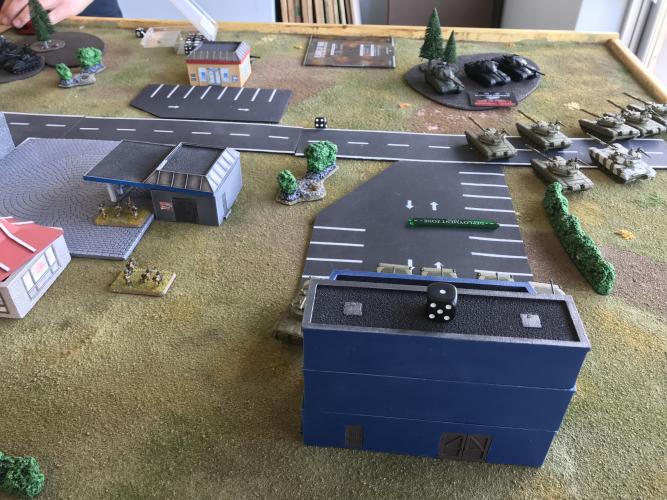 Tank assault on the right is ambushed. 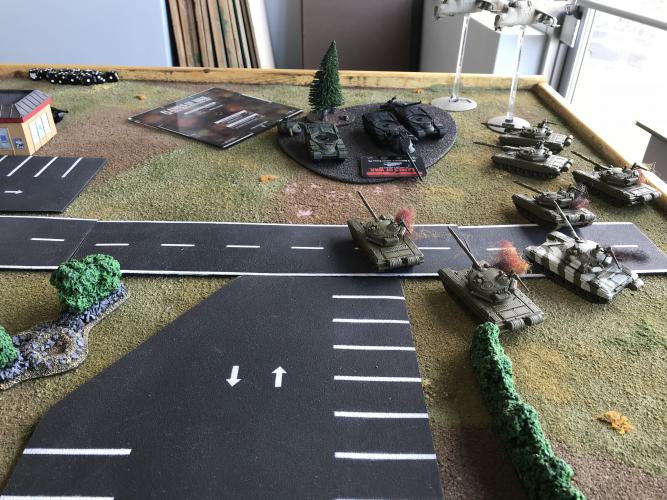 Ambushing enemy tanks are eliminated, and the Tank BN survivors hold on FTW.

Pilsner and the boys celebrating a glorious victory.