Once again our small 642nd Panzer Aufklarung Kompanie was alerted to push forward through the slot to aid in the battle for Berlin. It seems like we have been touring all of Germany in the last three weeks and we are getting tired and chewed up by all the battles and losses we have taken. With the loss of our attached Leopard 2 and Fuchs platoons we needed replacements and the battalion commander gave us several new platoons and strengthened some other ones. Maybe this time we would fair better in battle than during out last outing. Bavaria was not kind to us and those dang Soviets with their deceptive “maskirovka” units are really testing out nerves. We never know who is coming at us and if we should shoot or not. From now on we will shoot first and ask for forgiveness later. As we assembled outside of Berlin we noticed how dry and arid it was, almost desert like which must clearly be due to the drought that they have been having all around Berlin. Well, this is Berlin, our city with all of its history and we want all of it back so we need to kick the Soviets out of it and allow the East Germans to come back to the Fatherland. I feel we will unit the two Germanys very soon. This was going to be one tough gun fight! 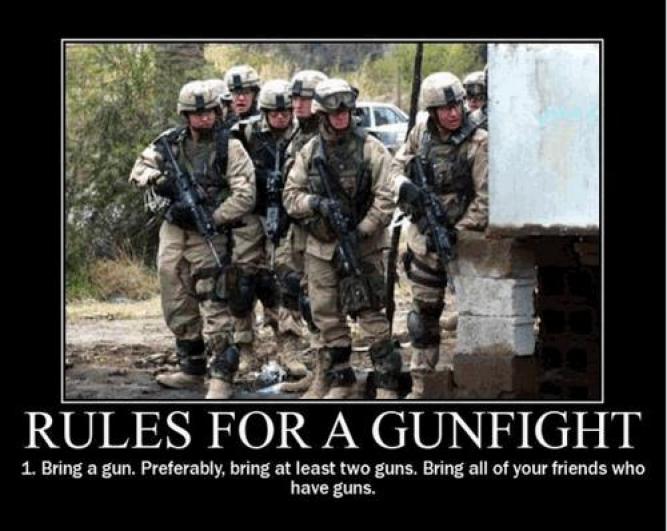 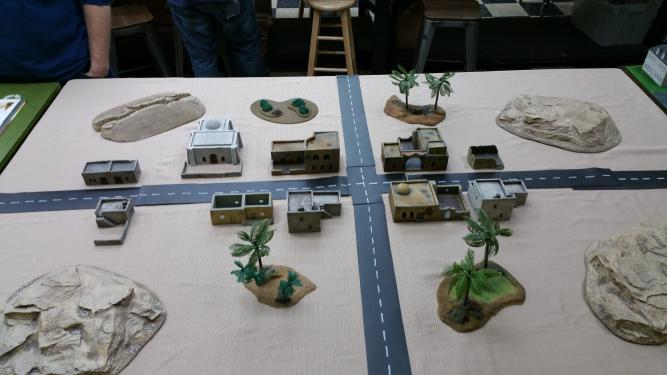 The quiet outskirts of Berlin seemed deceptively calm, and dry. This place reminds me of Tunisia. 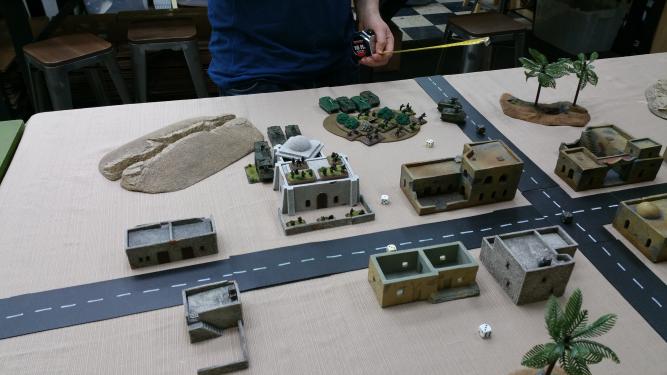 The enemy forces wer spotted with a light covering force in the northeast that we thought could be taken quickly if we pushed out and overwhelmed them. Right. 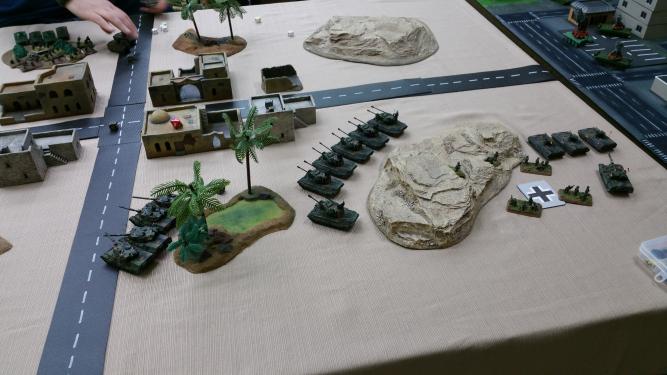 We assembled in the southwest with a solid force knowing that we had reserves on the way immediately and heard from higher intelligence that the enemy reinforcements would be delayed due to air attacks on their convoys. 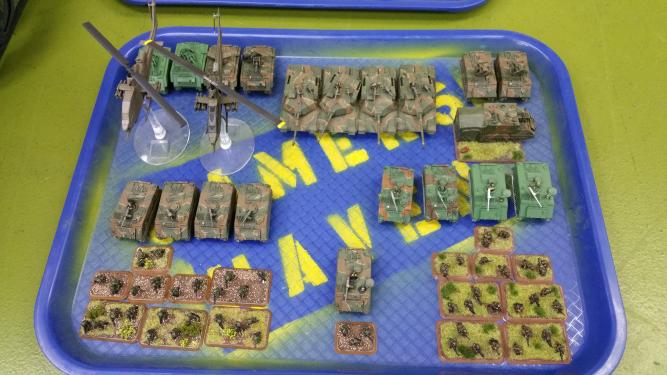 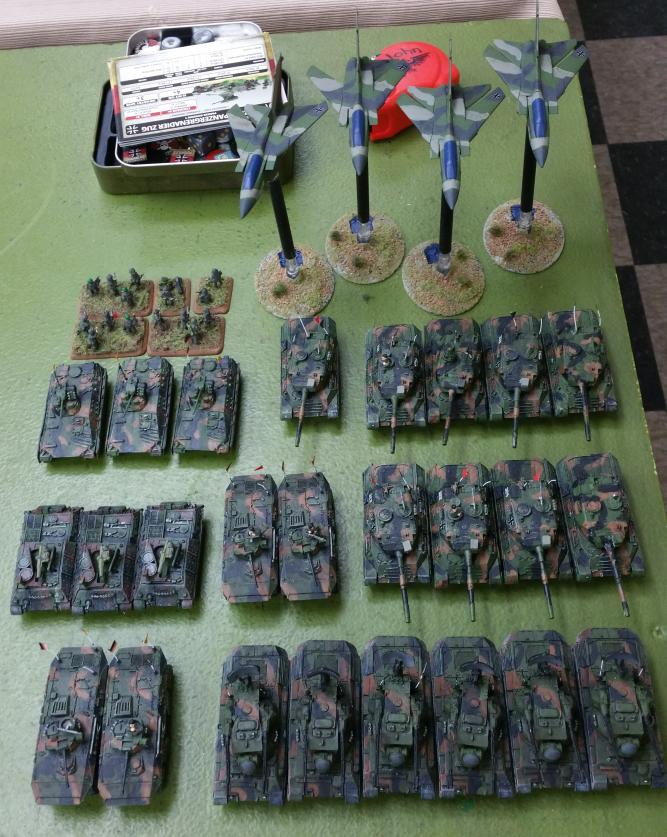 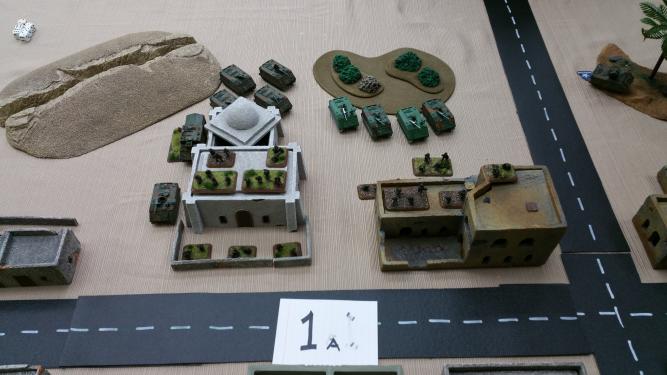 The enemy rushed forward with his Mechanized infantry to get into the town. Getting them out of there would proove to be a tough nut to crack. 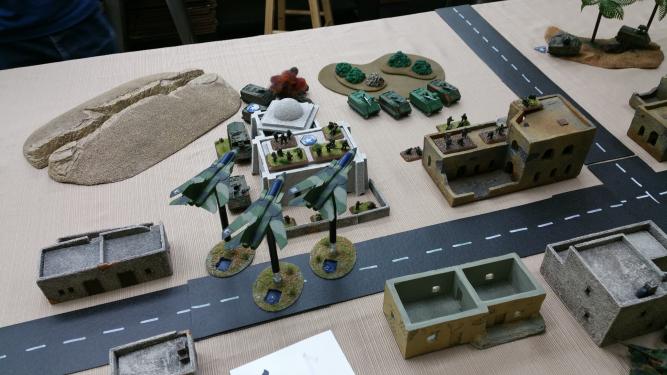 Since we had air support we called them in directly on the enemy infantry to try and attrit them as soon as possible. 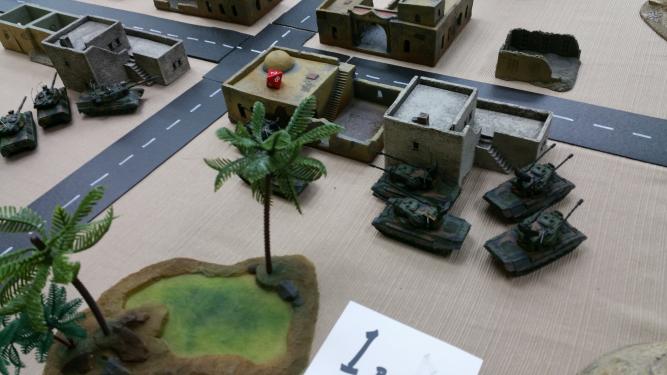 We also pushed forward with our forces to close in on the enemy so we could pour maximum fire into them from the start. 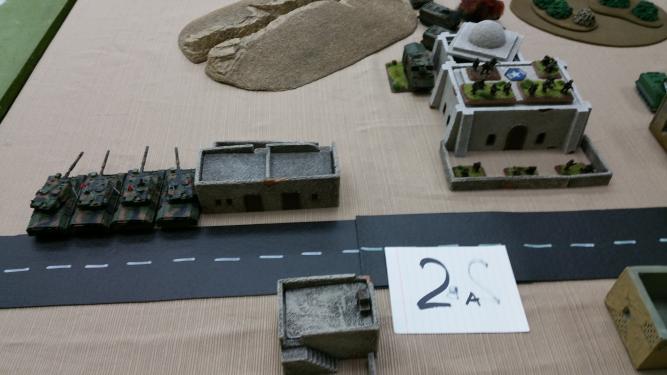 We pushed up on the left with our first reserve unit on tanks. 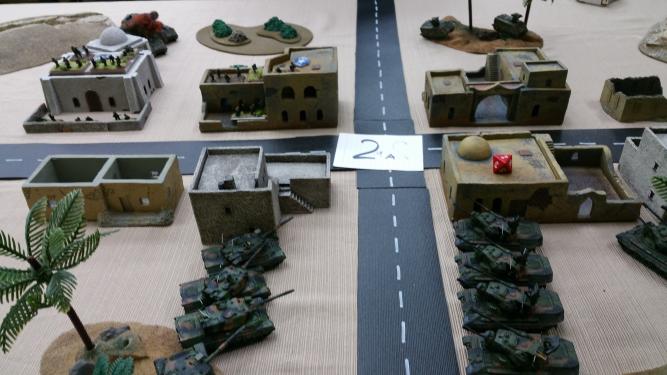 We also llined up to rake the enemy with fire in the town. We learned we had to be a bit cautious because thei Dragon missiles would cut clean through a Leopard 1 tank. We killed a few infantry but there were many more still there. 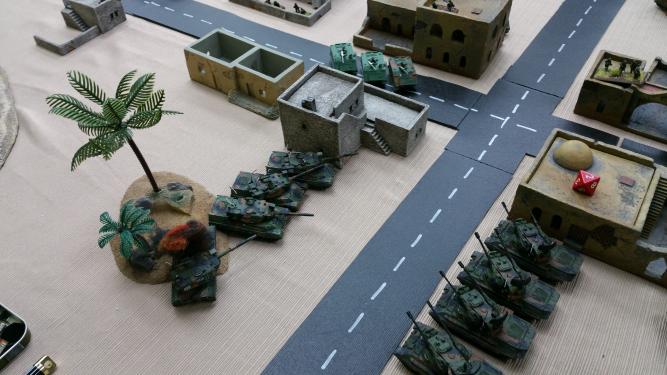 Once again we just could not hide everything and we lost a tank to missile fire from the infantry. 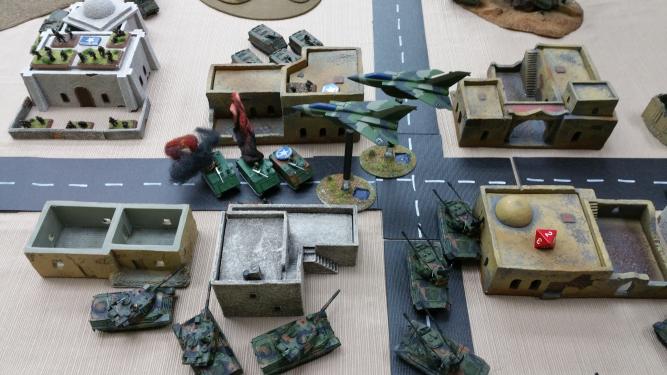 Having been pissed of and killed by enemy missiles for days it was time to call in an air strike. Sadly we lost two aircraft but they did put the fire to the enemy. 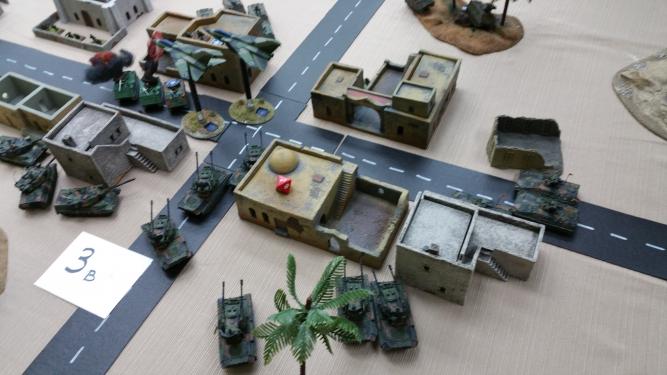 We maneuvered to bring maximum fire on the enemy and destroy his mg carriers before the air strike. 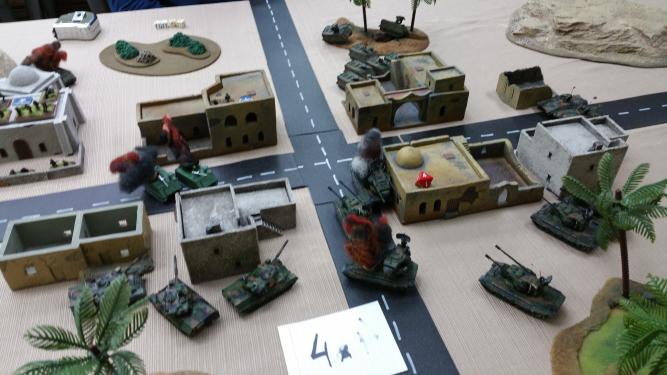 We were ble to tear up the enemy but the remaining infantry still had missiles and brewed up a couple of our Gepards. A sad loss indeed. 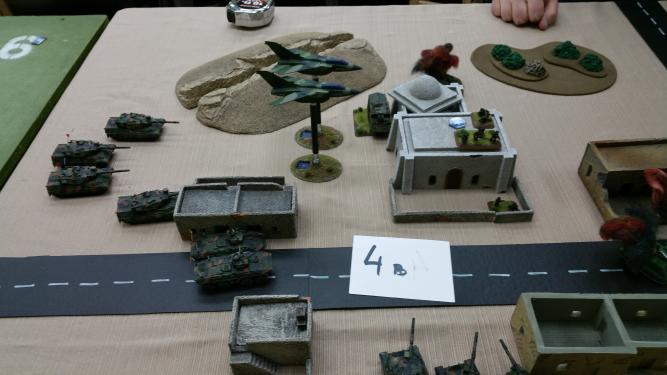 It was now or never to strike hard for the objective before the enemy got his heavy tanks from reserve. 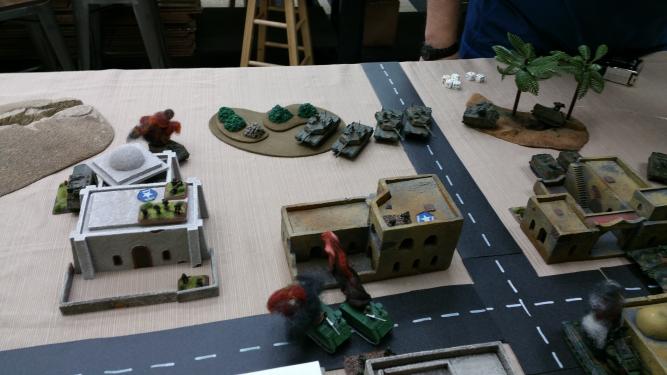 Ah, if only time and luck were on our side. Too bad for us for here come the enemy M1 tanks to melt away our tanks. 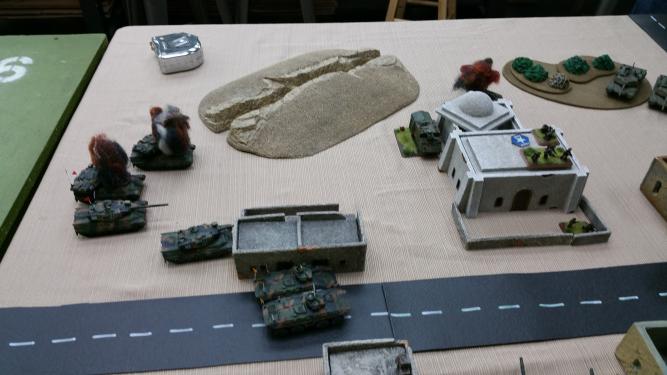 No matter what we did the enemy missile launchers still remained and cut through more of our tanks. Things were going south rapidly and we had no big tanks to come to our rescue. If only our battalion commander had given us more Leo2s. 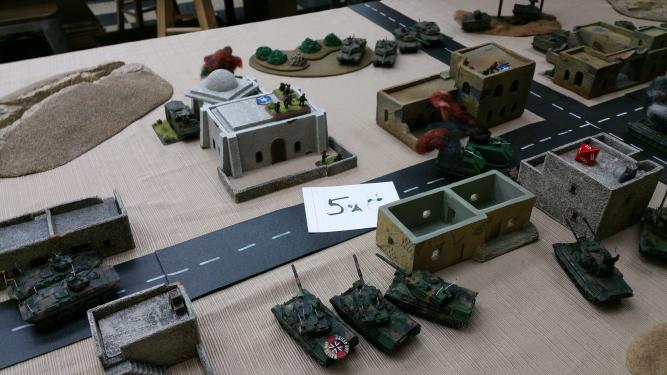 We kept up the fire on the enemy infantry trying to clear the field of them so there would be no combined assaults on our small platoon holding the objective to our rear. 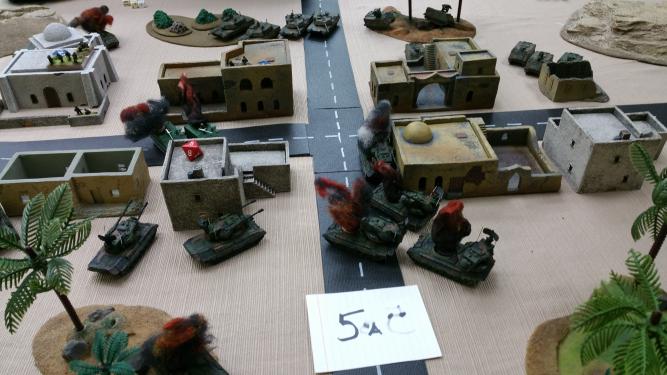 Oh crap, the enemey M1s shifted to the right and poured main gun rounds into our Gepards in hopes of killing them off before the Cobras arrived. 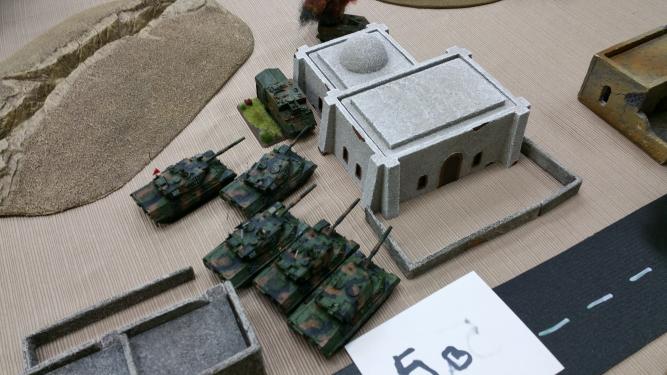 The plan was working. We killed off the infantry holding the forward objective and had ample armor on the objective to hold it. If only...... 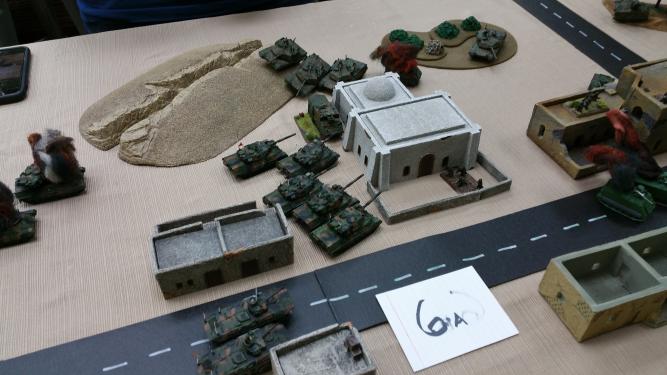 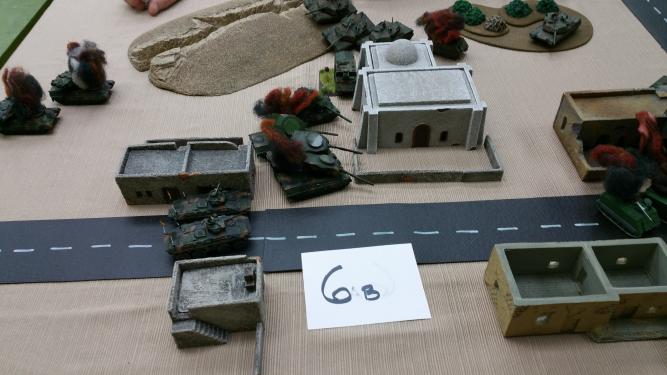 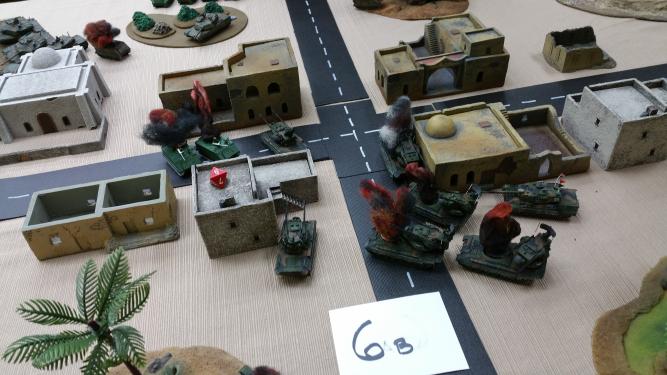 In town we were continuing to clean up the enemy infantry when we noticed that it looked like the platoon leader had been killed. (Note: make sure you mark all plt lders. Its important.) This platoon would have probably run after its last casualty but we decided to keep on going and just let the infantry keep fighting to the end. We all learned some good lessons and a better understanding of the rules. 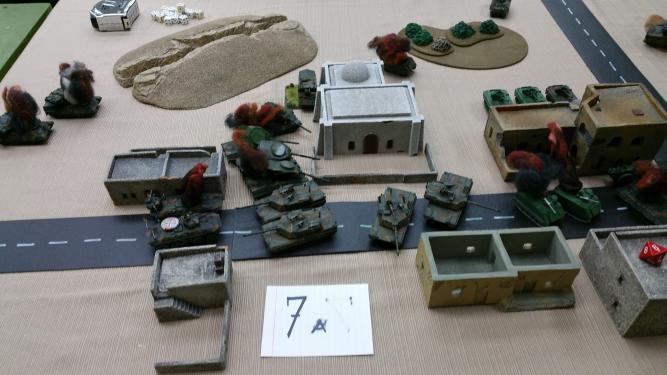 And then the M1s came calling in town with a plan to decimate any remaining West German forces still there. The plan worked pretty well for them. It is hard to stop main gun rounds when you get no save rolls. 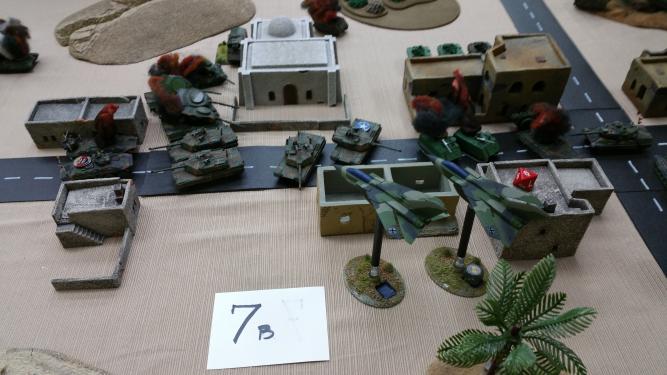 Well just maybe an air strike could save the day? Nope, only bailed one tank. We suck and that's sad! 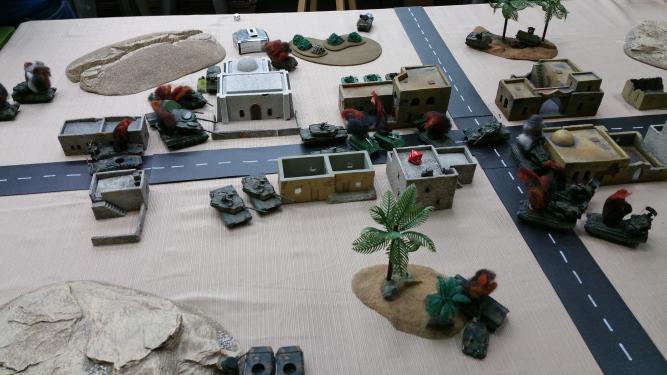 Now the Americans have the town and we have little left to fight with. This battle started out fast and ground to a halt when the M1s showed up. 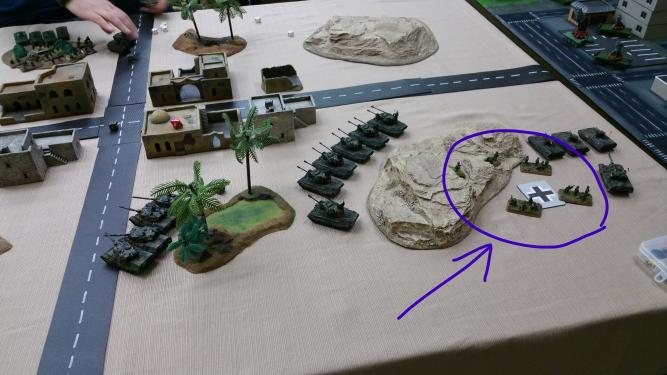 Remeber these guys? They were still there on the other end of the table, dug in and gone to ground. After 8 turns of death and the fact that it would take two more turns for any enemy forces to get close enough to even shoot at them we decided to call the battle and make it a draw since we had botched a few rules with the US infantry. All in all a great battle that surprised us both. My opponent was really tough and my dice and forces were not up to the challenge. Maybe next time. 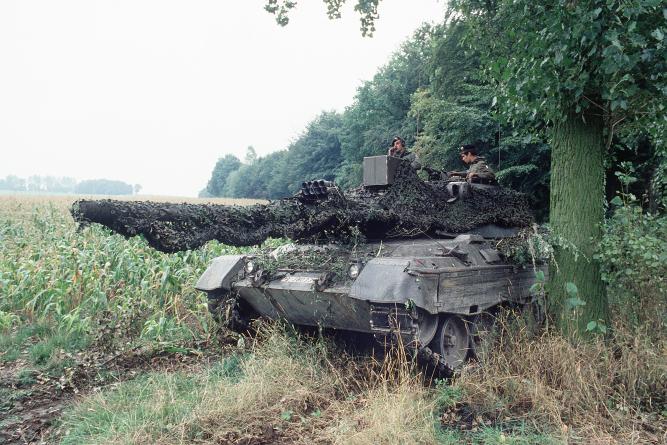 Next battle we need to hide MUCH better.