Team Argonaut thundered down the road. Taking advantage of breaking the Soviet advance, they were hot on their heels, exploiting the gap in the lines.Third platoon was taking point with CPT Cook behind them and Second platoon closely behind. CPT Cook rode high in the coupla, observing the countryside. Along the side of the road, a billboard was placed. As he got closer, he could make out the words "YOU ARE LEAVING THE AMERICAN SECTOR" in various languages. They were now entering the Leipzig Sector. 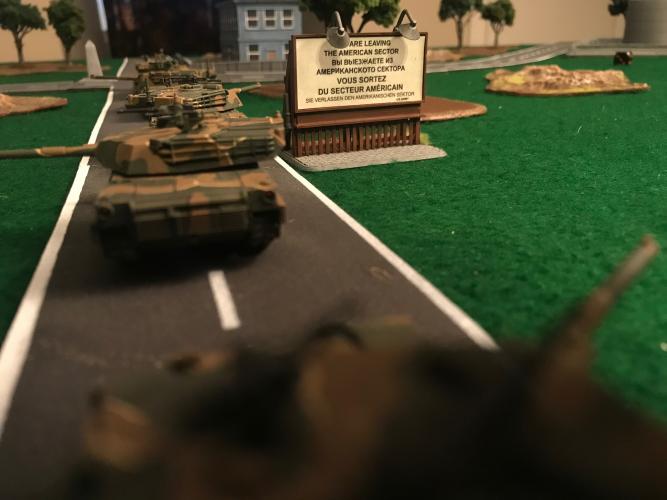 "YOU ARE NOW LEAVING THE AMERICAN SECTOR"

As 2LT Rosebrock in the lead tank passed, he points to the opposite side of the sign and says over the net, "One might think we aren't welcome." As CPT Cook passes, he peers at the back of the sign, he sees the vandalism Rosebrock mentioned. "YANKEE GO HOME" was painted on the back of the sign in the pattern of an upside-down American Flag. 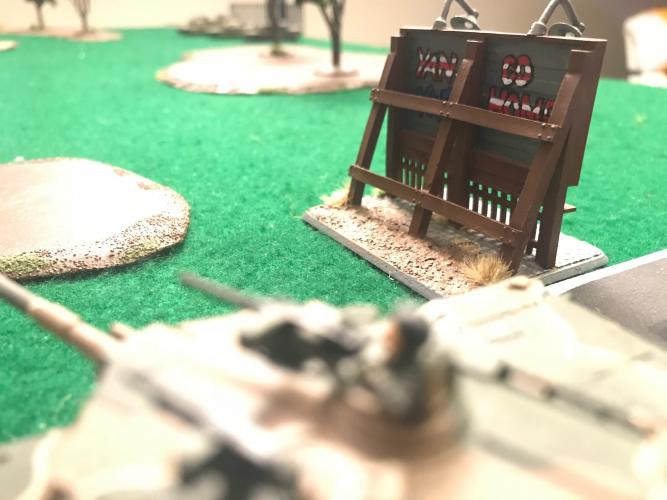 Team Argonaut, capitalizing on its successes in the defense of the Hof Corridor, start their push into Leipzig. This was a 100 Point game using the Contact Mission as found in the More Missions PDF, with the United States as the attacker. We roll on the Time of Day table and get Dusk. My opponent deploys a T-72 company, his SAM platoon, and his HQ unit, with a Storm Anti-tank platoon in ambush. I deploy my two tank platoons, HQ, and scout section. I use my scouts to push up into the town, deploying Third platoon on them. 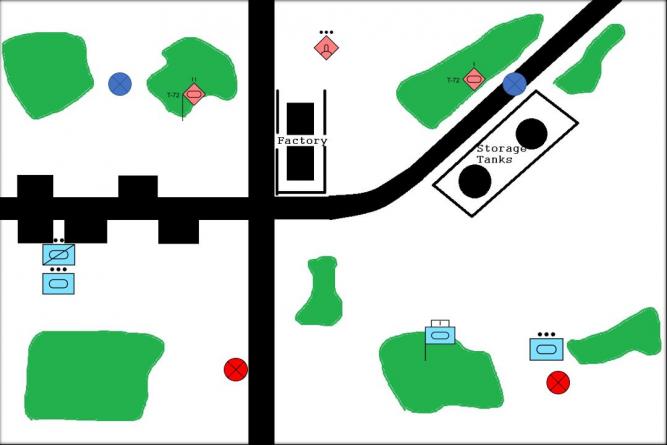 I roll for my reserves but get none. The scouts move into the town. Third platoon pushes up to engage the Battalion Commander, hitting twice and destroying him. Tank 22, Second platoon has a clear shot at a tank in the T-72 company but misses. Tank 66 sits in place, going to ground. 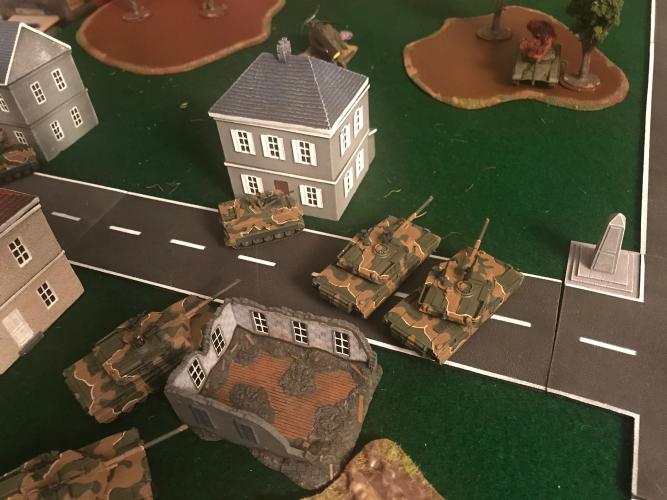 Third platoon scores the kill against the Battalion Commander. 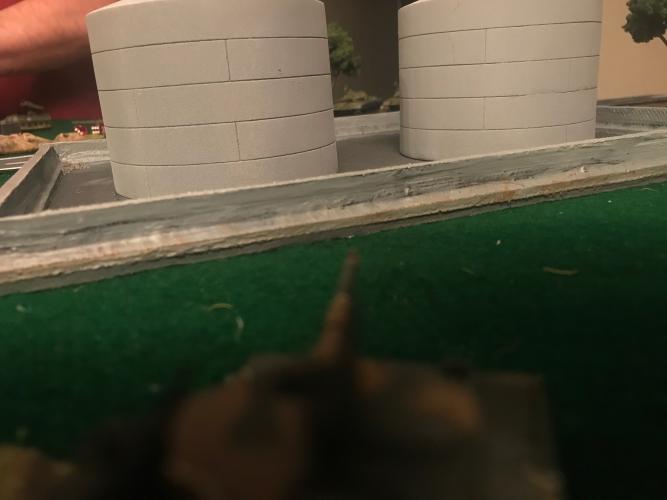 "You better thread the needle Delacruz or we are all gonna go up in flames!"

The Storms deploy in ambush in the same woods of the Battalion Commander, right in the face of Third platoon. Luckily, their missiles soar past Third Platoon. The T-72 company takes two shots at Tank 66, missing. Two more tanks of the company fire at Second platoon, scoring hits and bailing the PL in Tank 21, and Tank 22. 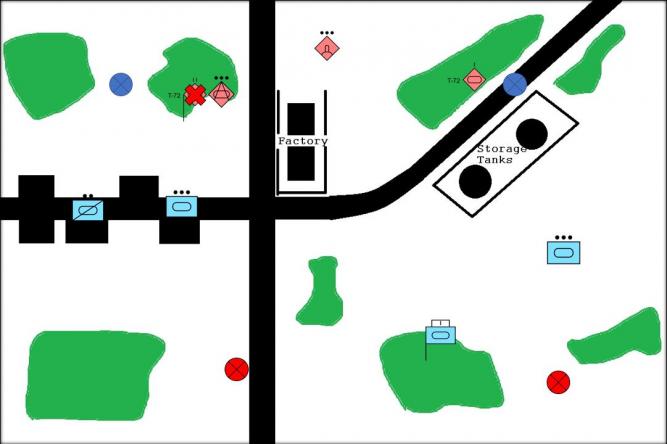 I managed to get two reserve units, bringing in Cobras and Mechanized platoon. The Mech platoon dashes up the main road, rushing to secure the crossroads and factory. The Cobras hang back, not willing to close distance with the Gophers still operational. The scouts move in to secure the crashed Huey, contesting the OBJ. The M113 of the scouts fire its .50 cal at the storms, hitting one but the armor holds. Second platoon, leaderless, move to return fire against the T-72s, able to destroy two T-72s. Third platoon moves up and engages the Storms with six shots, missing all of them at 4+! Tank 66 fires at a Gopher, destroying it and causing the other to flee the battle. 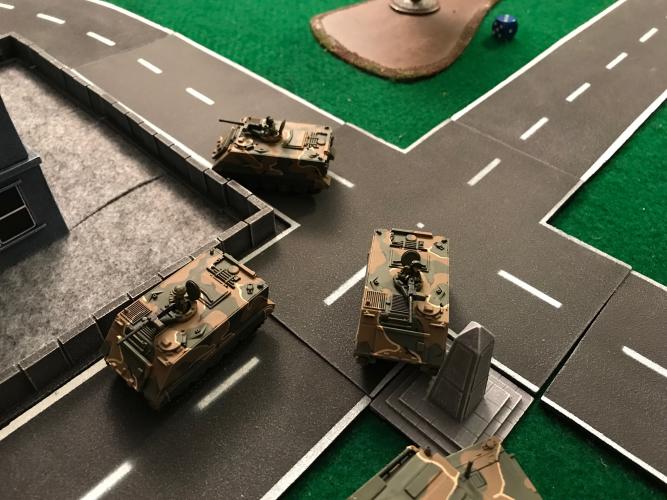 M113s race across down the road to secure the crossroads. 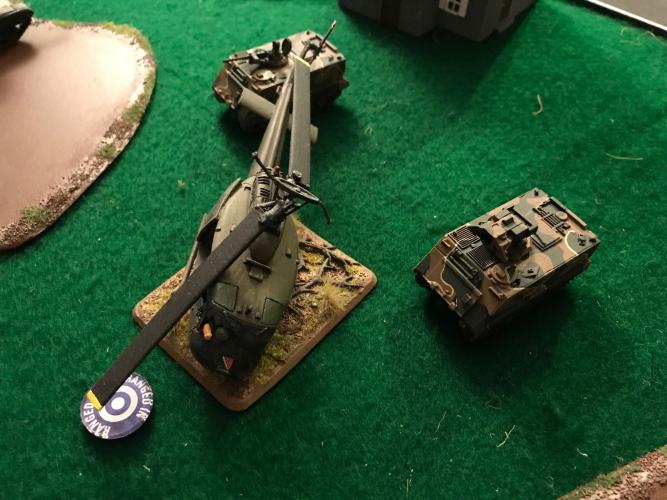 Scouts push to secure the downed Huey and its crew. 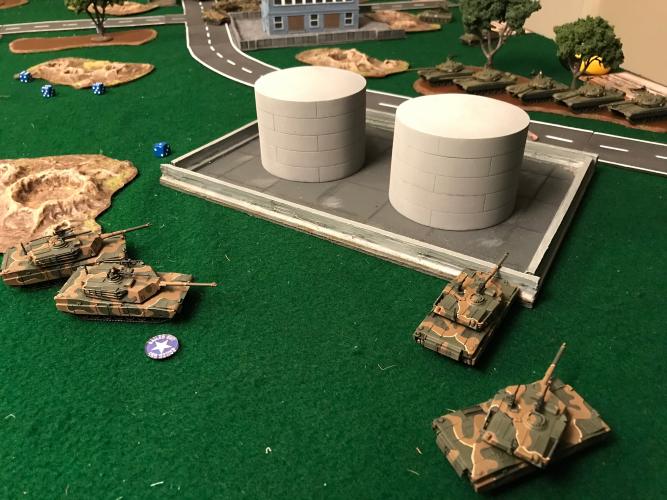 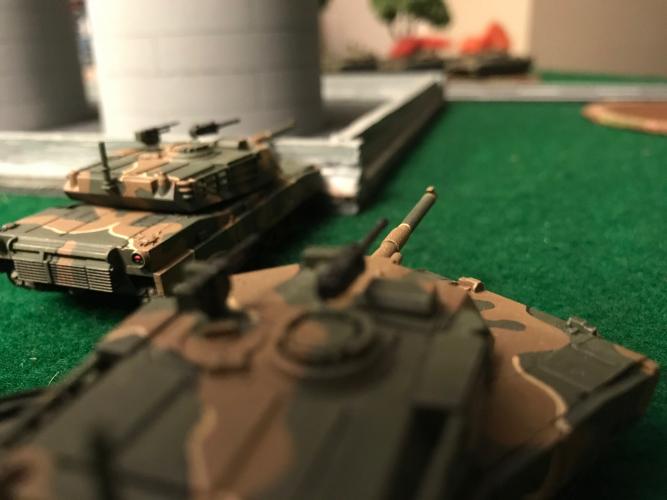 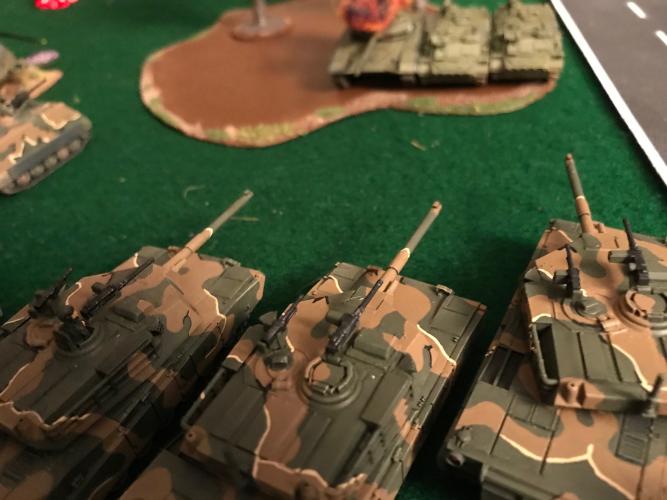 "You missed! How could you miss? He was three feet in front of you!"

The Storms attempt a blitz move, but they fail. They also fail their cross checks, both bogging in place, unable to return fire or contest the OBJ. The T-72s fire back at Second platoon but are unable to score any killing blows.

With that, I am able to secure the objective on Turn 3, ending the game with no casualties. 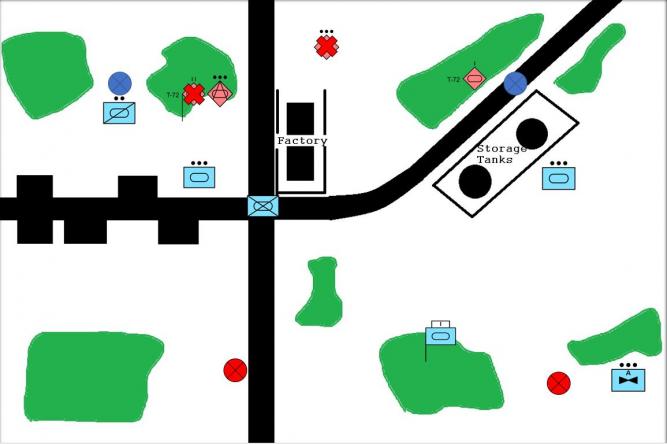 Cook scrunched his brow. "Argo 2-6, say again. They're running? Over." This can't be, the engagement just started, it can't already be over.

"Affirmative, they are abandoning firing positions."

"Argo 3-6 here, we just bore witness to crewman fleeing their bogged vehicles and running for their lives, I think we beat 'em, break. The scouts have secured the downed bird and the legs are taking the factory, over."

Cook was annoyed, he'd hope they'd put up more of a fight now that they were in Red lands. Oh well, a victory is a victory. "Argo 6 copies all, take defensive positions and wait for a counter attack, out."

This battle was fast and vicious, and I used the spearhead of my scouts to my full advantage. I was able to quickly overwhelm the defenses and secure the objective by the top of Turn 3. I think my opponent could have made a better choice of his ambush than the two Storms. I only had one tank bailed for the entire game. Overall it was a quick victory for Team Argo!