It was a cold night as CPT Cook's M1 sit in the woods overwatching the main road. Intel suggested the Russians would be attacking down this road soon, trying to make headway into the Hof Corridor. The tank sat idling, the turret occasionally traversing to view the nearby town for motion. He leaned back, closing his eyes and giving them a rest from peering down the sights.

His gunner broke the silence, "We've got movement down the road!" Cook snapped up, peering into the sights. The thermal image was of two vehicles traveling full speed down the road. The heat signatures were box-shaped.

"Looks like our scouts." Cook tried hailing them on the radio to no avail. "Driver, shut it down. Let's see what the fuss is about." The tanks turbine engine whined down until it fell silent. The M113 and M901 pulled up into the woods next to the tank.
A gobsmacked TC shouted over the engines powering down.

"Our radio is on the fritz so we drove like Hell to get here. Sir, we got at least two dozen Ruskie tanks heading our way!"

Cook pondered for a moment. "Alright, fall back and move south, see if you can get around where the infantry is dug in and surprise them."

"Yes, Sir!" Both vehicles restarted their engines and powered off down the road. "Alright Cunningham, let's wake her up again." As the engine whined to life, he switched to the Company net. "Argo 6 to all Argo elements, we have a battalion-sized armor element heading our way. Prepare for contact!"

This would be Team Argonaut's first taste of real combat against the Russians. No more training. No more exercises.

This would be their Baptism by Fire.

We decided to play 100 points in the Hof Corridor as an intro to the campaign for us. The Dawn rule was in effect and the Battlefield cloaked in darkness. I had my HQ unit, M109 battery with FIST, and dug-in mechanized platoon deployed on the table. I held a tank platoon in ambush. 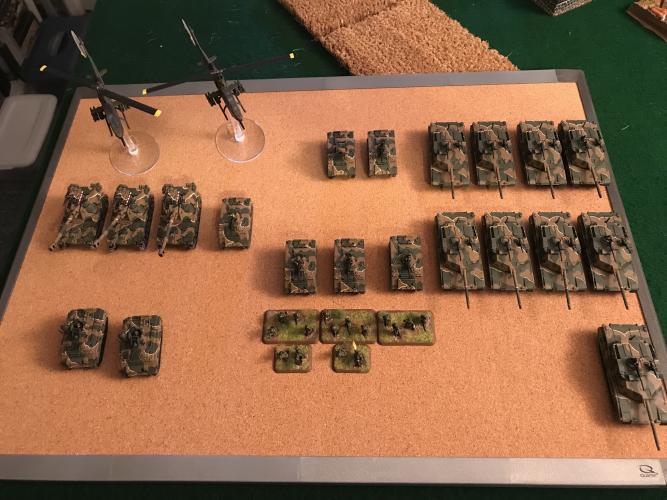 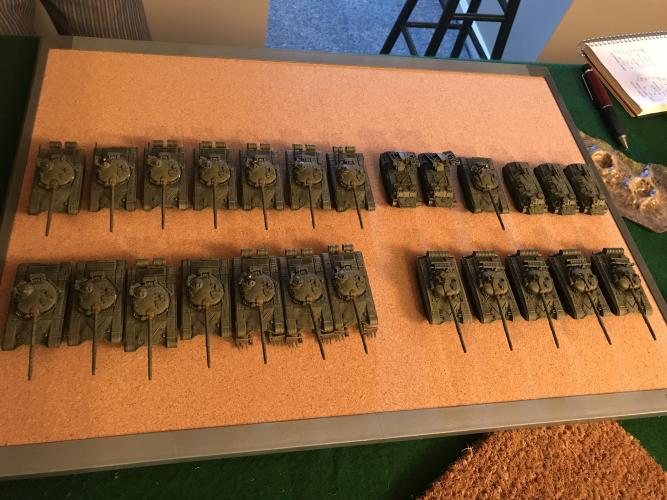 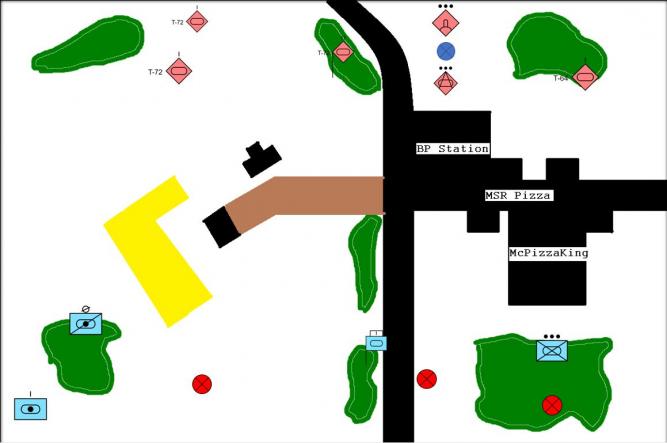 The first turn was uneventful. I didn't get reserves or my move and my opponent, curiously enough, didn't move his forces up.

I didn't get reserves once again. I held my positions, waiting for the Russians to make their move.

The enemy started to turn the screws, moving up to start engaging my forces. A T-64 bogged down trying to get out of the woods, and the forward T-72 company took shots at my FIST, all missing. 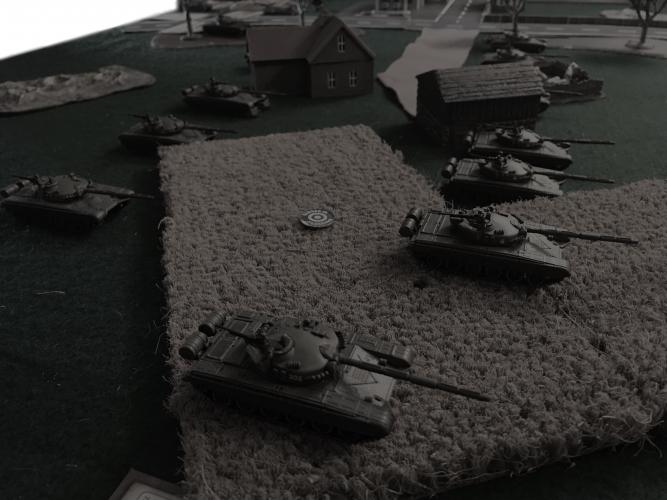 T-72s use the cover of darkness to close in on American positions. 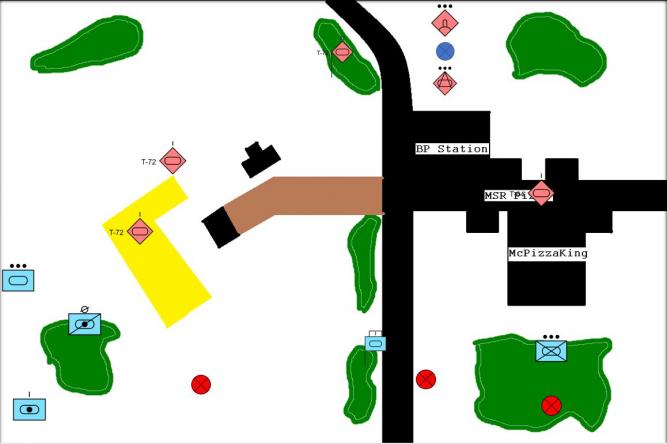 Rolling for dawn, daylight decided not to break. I got one reserve and decided to bring in my Abrams platoon. With the scattered reserves, I rolled to have them come in on the left flank, right where I needed them. They all fired into the lead T-72 company, destroying two. I ranged in my artillery on the lead company, destroying another T-72. I shoot my dragon teams at the T-64s that have now exposed their side armor to me. One misses, and the other hits the front of the turret, the armor unphased by the missile. 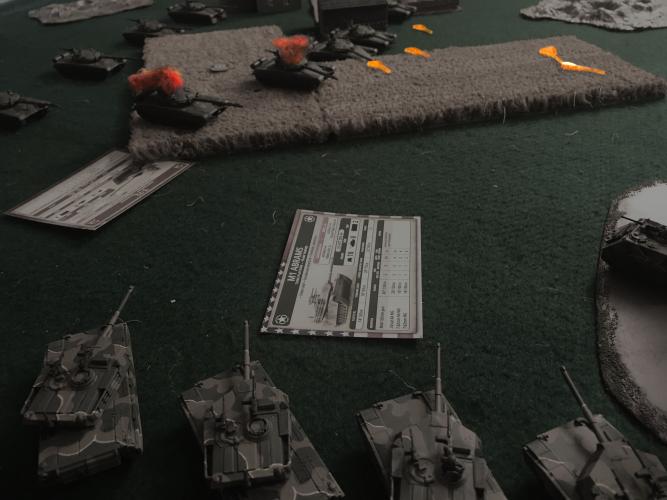 An Abrams platoon coming from reserve strikes onto the flank of the lead T-72 Company. 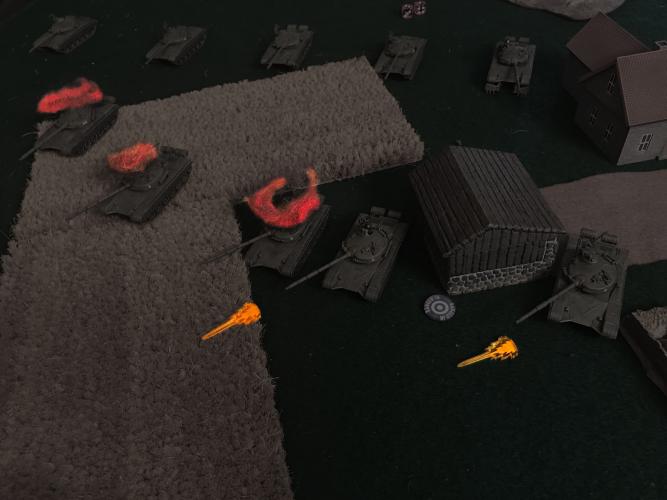 Artillery quickly ranges in and fires for effect, destroying a T-72. 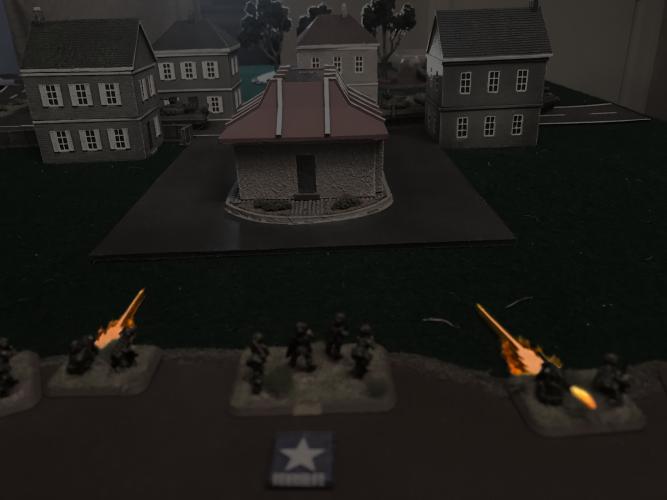 Dragon Missiles attempt to get the easy kill on T-64s, but they do little besides alert the crew.

The Russians keep pressing the advance, moving their lead T-72 company into contesting range of an objective. They fire on the M109s, destroying two and bailing one, causing them to flee. The second T-72 company moves to deal with the Abrams, destroying one and bailing another. The T-64s turn to face the infantry and returns fire at them, missing their shots. 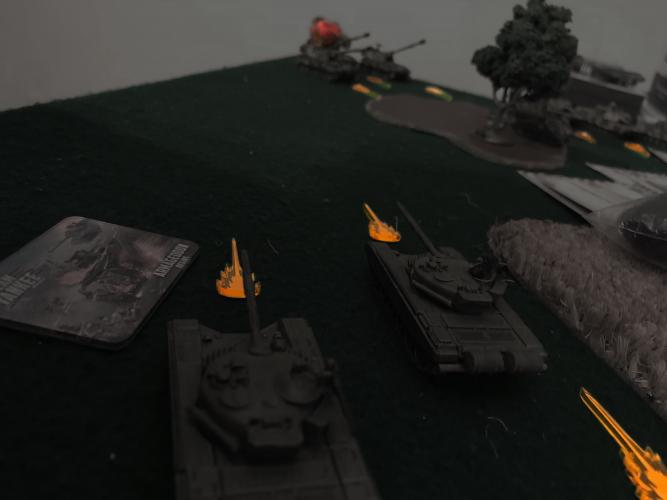 The lead T-72s take out the pesky artillery battery. 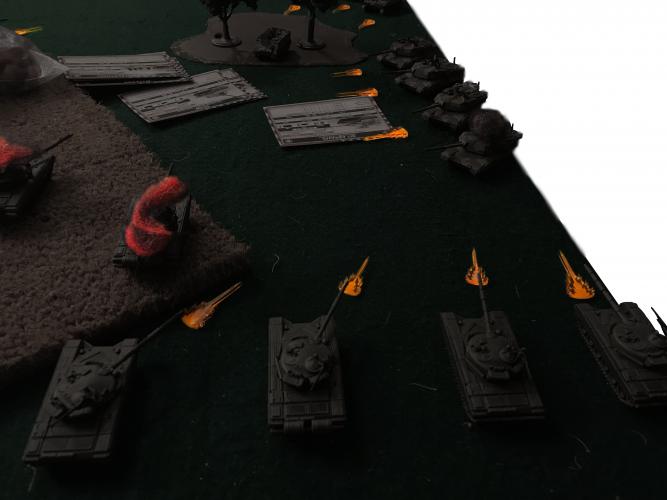 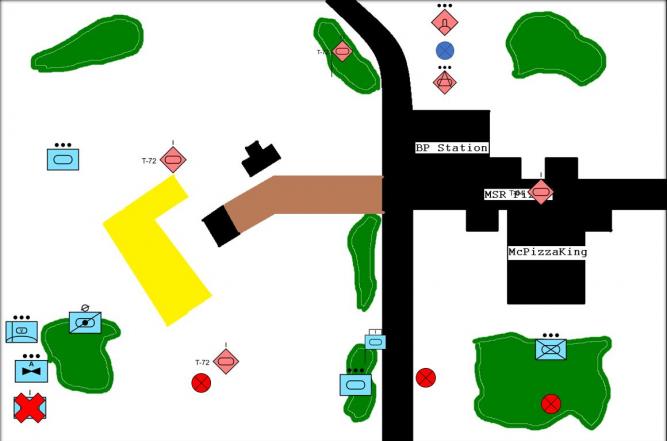 A grin crept across LT Rosebrock's face. "They have no idea that we are here." He observed the T-72s obliviously roll past their positions. "Hold your fire everyone, wait until they show us their behinds." The tanks turned sharply to the right, their rear armor not facing Rosebrock's platoon. Before he could give the order to engage, a shot rang out as they engaged the artillery battery. "Shit, Third platoon, let them have it!" 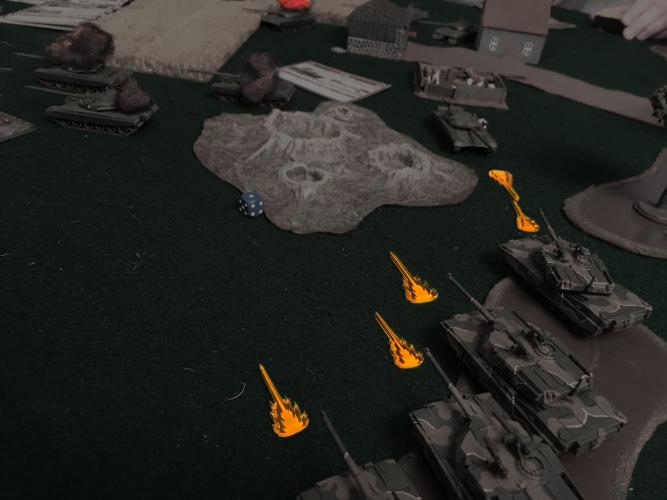 Once again, the battlefield remained in darkness. With the T-72s contesting and the objective, I revealed my ambush in the tree line to their rear. The exposed rear armor and lack of concealment left them a juicy target. Rolling for reserves I got 2 units, so I chose to bring in the VADS and Cobras. The VADS got the left corner while the Cobras got the table edge, so I had both deploy in the left corner behind the tree line. I moved second platoon right into the ranks of the rear T-72 company, using the cover of darkness to my advantage. They kill three and bail one. Third platoon opens fire onto the contesting T-72s, killing three and leaving one sole survivor with no leader. The dragon teams fire again, one finding its mark on the side of a T-64. Unfortunately, the BDD armor absorbs the impact. CPT Cook, impatient with the lack of action, moves out of his firing position to engage a platoon of anti-tank tractors he spotted. 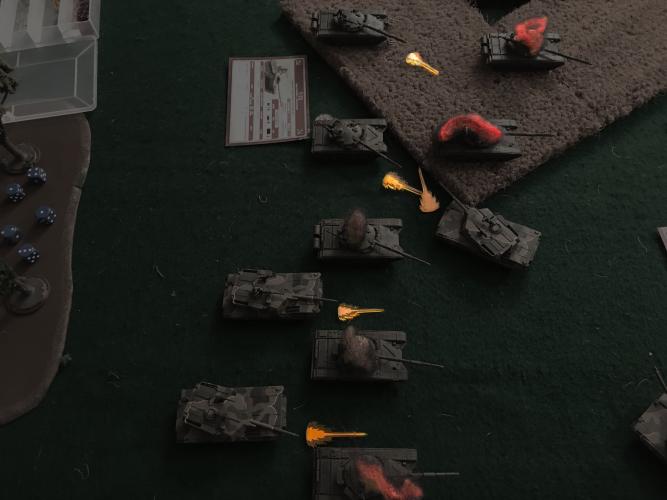 The Abrams rocked back with the recoil of the gun. Cook observed the round land behind the Storm, impacting in a spray of sparks. There was no explosion or cook-off from the track. "Did you use SABOT? Load HEAT!" Suddenly there was a hot, bright flash appeared from two of the Storms. Just as he processed what was happening the tank was rocked by an explosion, fire protection systems going off. He coughed, "Status!" His crew acknowledged they were all alive but the tank was finished. "Alright, dismount! Head for the trees and use them for cover to retreat to third platoon's position!"

The storm was bailed but the HQ tank but quickly remounted and fire its retort, destroying the Abrams. The T-64s inch closer, splitting their fire between the mech platoon and third platoon through their tree line, no hits. The lone survivor engages the Abrams direct front of it, destroying it at point blank. The remaining company of T-72s get into a swirling knife fight with Second platoon but are unable to score any hits in the night and confusing mess of steel. 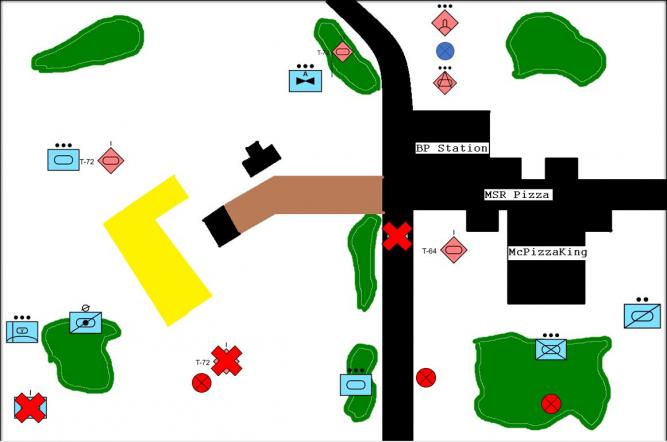 Daylight still hasn't broken. The scout section returns as my last reserve on the right flank. Unfortunately, they quickly get bogged down in a crater. My Cobras move behind a tree line to pounce on the Gophers. 2nd platoon continues to engage the T-72 company, killing another two and bailing one. Third Platoon PL engages and finished off the last tank of the lead T-72 company, knocking the first enemy unit out of the game. The remaining two tanks traverse turrets and engage the T-64s, bailing one. Dragons fire and miss. 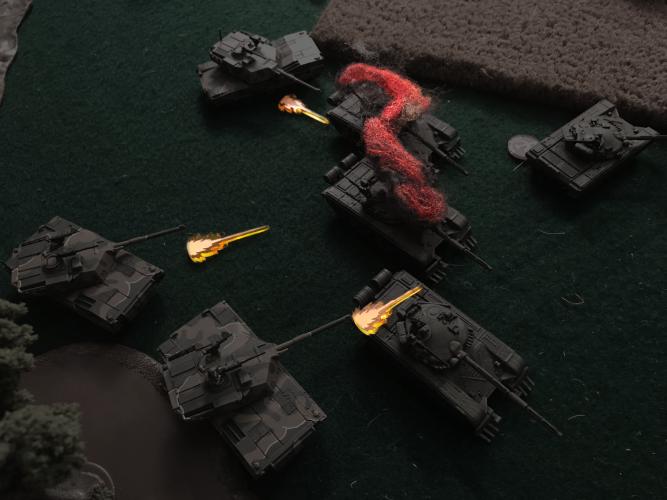 Second Platoon keeps the pressure on the remaining T-72 company.

The remaining T-72 company passes its morale check and remounts its bailed T-72, they reposition to get cover from the crop field. They fire at second platoon, missing all their shots. The T-64s move to contest the objective, firing at third platoon once again and missing. The Gophers take aim at the Cobras, shooting down one. 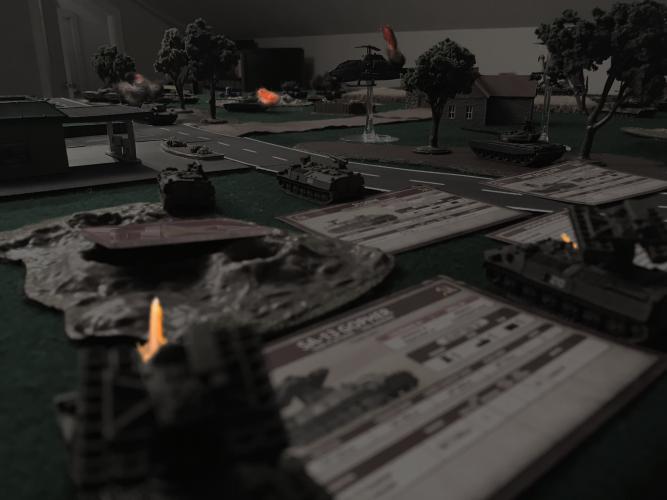 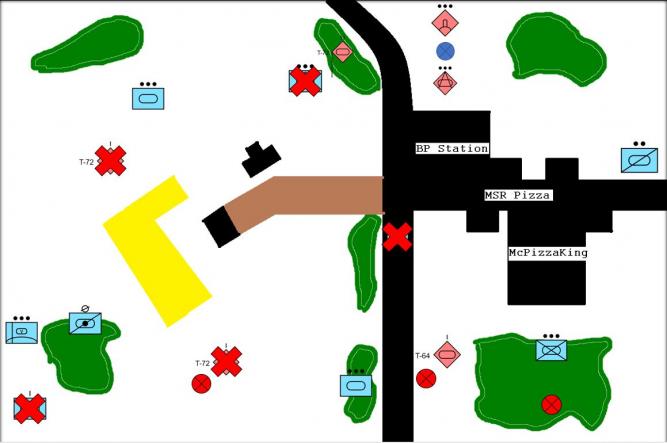 Still, the sun does not rise. The remaining Cobra feels the battle. With defeat in sight, I decide to try one last desperate gamble. I keep two of my Abrams tanks from second platoon in place to try and finish off the T-72s and I move the platoon leader to engage the Gophers. Third platoon leader moves onto the flanks of the T-64s. Second platoon leader is able to kill a Gopher and bail the other, but they pass their morale test. With that, I've forced a formation morale check at the very least. The remainder of second platoon kills another T-72, leaving only the company commander left in that unit. He passes his morale test. Third platoon fires on the T-64s, killing two and bailing one, just shy of forcing a morale check. 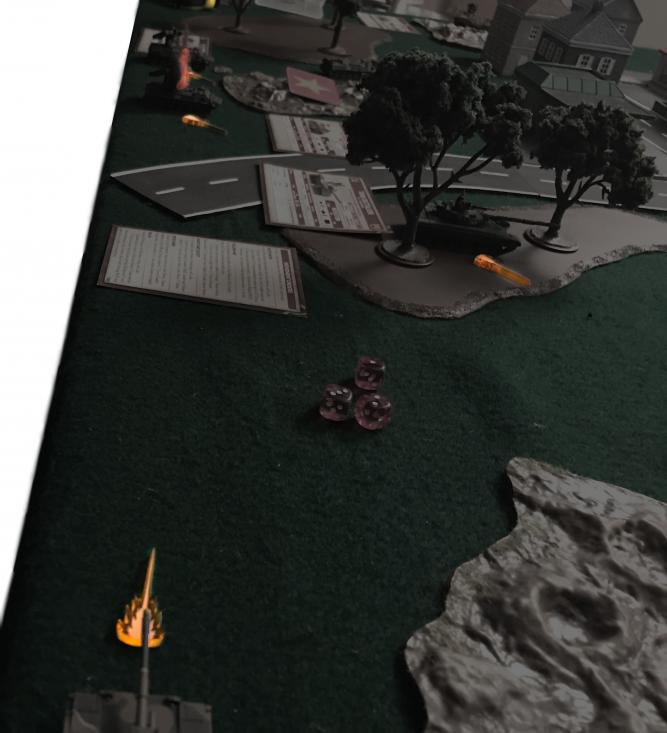 The second Platoon PL takes some long shots, and they find their marks! 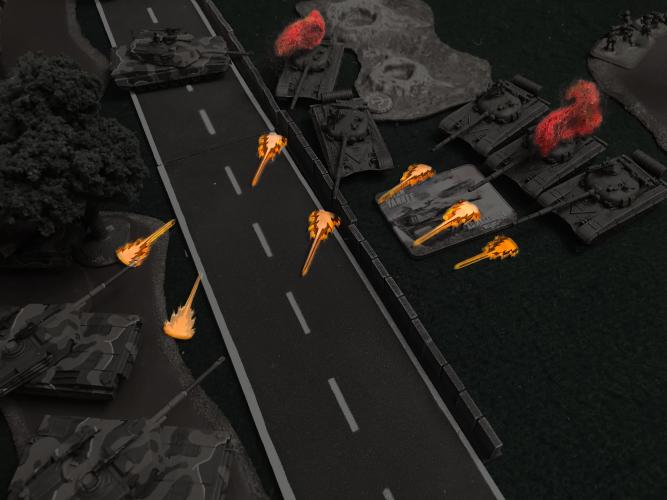 With the bottom of Turn 6, the Russians pass their formation morale, thus staying in the game and winning the game.

CPT Cook clambered up to the turret of LT Rosebrock's tank. "Sir, are you alright? What happened?"

Cook ignored the question. "Tell the company to fall back to Rally Point Delta. We'll regroup and reorganize there." Rosebrock just nodded as he relayed the orders to the company. The tank started to get underway, retreating from the battlefield with Cook and his crew clinging to the outside. Cook, despite the loss of ground, was able to give the Russians quite the black eye with fifteen destroyed tanks while only losing three of his.

That is, if he ignored the support assets lost under his command.

For this battle, I feel that without the night it would have been impossible for me to hold out as long as I did. It's very difficult to hold to three objectives with such little fighting force. I was pretty careless with my Cobras and artillery. Soviet morale is a tough nut to crack, they never seem to want to flee!

Hopefully, I'm able to rally my troops and mount an effective counterattack before Ivan has a chance to dig in!