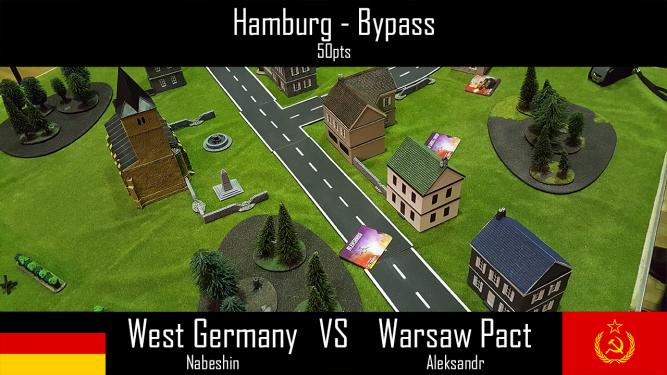 A foul, chill wind swept over the unkept grass of, carrying with it the clatter of distant fighting. Intel placed a Soviet tankovy heading this way, no doubt aiming to reinforce their fighting front beyond the long-abandoned town of Billwerder. This is where Hauptman Hauswald came into play, his orders were to stop the reinforcements before they could link up with the rest of their battalion using the motorway bridge to the West. He’d been given a modest interception force to do so, his trusty panzer grenadiers were supported by Jaguars, Luchs and Gepards, he was promised a little artillery and fly-by air-to-ground support too. Kneeling up from his position in the dew-covered grass, he finishes his informal reminders for the men over the radio.

“… Remember, sit tight in those houses on the road, focus on armour, our scouts will await to strike from the North and South flanks. Don’t worry about letting the panzers get close, our old AT toys at the rear will see to them.”

He finishes his broadcast with a sigh and lowers himself into the grass once more. It was a long wait before the familiar clamor of tracks on asphalt could be heard in the breeze, the Germans were ready. 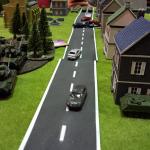 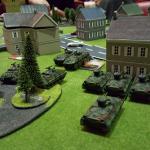 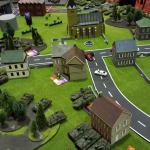 The Russians had arrived as anticipated, using the road to move quickly, unexpectant of an ambush. That seemed to be the case, until the leading T-64s swerved violently off the road, screeching hard as the pressed the left flank. Just then, the BDRMs, who kept pace, sprayed their MGs into the 1st floor where the grenadiers were bunkered down, the tank MGs followed suite. Rounds pattered off the walls and the Milans retreated from their shooting holes, their keen Soviet senses must’ve kept them savvy to the situation, the Milan ambush was scuttled. 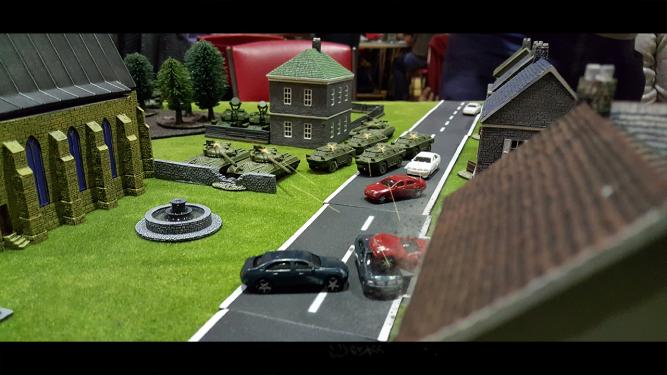 However, one never plans to put all their eggs in one basket, the units at the rear of the infantry were already trained to fire upon the swiftly advancing enemy. The artillery spotter’s calls were heard over the pounding of the 155mm howitzers, two vehicles took direct hits, splitting them apart, the crew of another run for cover. The crack and whizz of HOT missiles launched from the supporting Jaguar unit is followed by a flash of heat, the violent eruption shattering the windows of the church nearby, two T-64s fall victim to the explosive payload. The flankers used this to their advantage, pouncing on the remaining abandoned BDRMs, eliminating the last two as they lay vulnerable in the middle of the road. On the left flank, the rushing OPFOR is met with a hail of 35mm gunfire, the Gepards are entrenched in the woods and switch to ground targeting, ventilating the hulls of two BMPs and halting the rest. 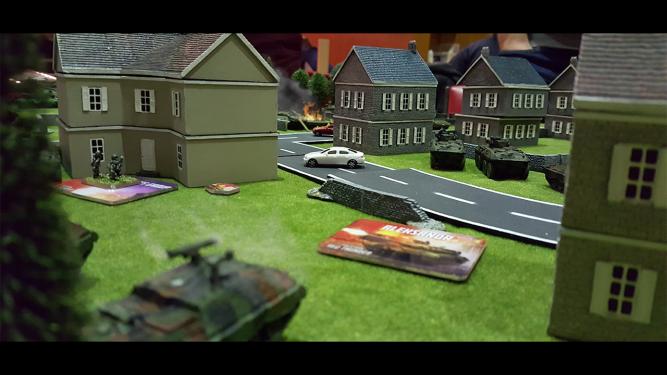 Amidst the clap of battle, the flailing of Mi-24 rotors could be heard rising in the din, until the clattering bursts form from the forest, revealing two of them on the left flank. The Gepards, knowing their role, swing their turrets to meet the aerial foe but they are sluggish and bogged in the forest. The Hinds open their cannons into the rear of their hulls, the crews escaping before one of their vehicles begins to plume with smoke, through which the Russians advance. 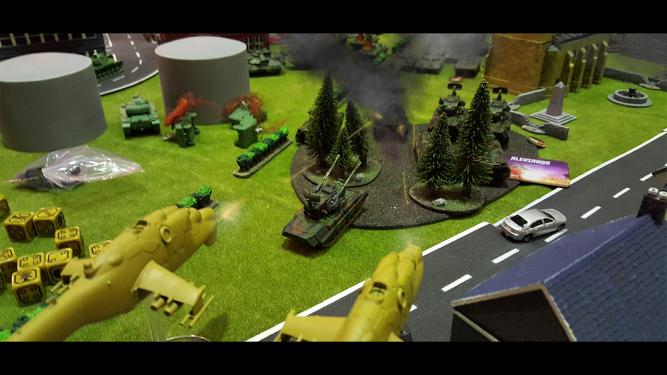 In the chaos, the flanking Luchs troop press the rubble-strewn back lines to hunt the Shilka AA spotted at the rear, through the smoke their thermal imaging spots their familiar silhouette. Their guns line up and hammer the enemy with repeated shots until the light of flame is visible through the cloud of dirt and debris. 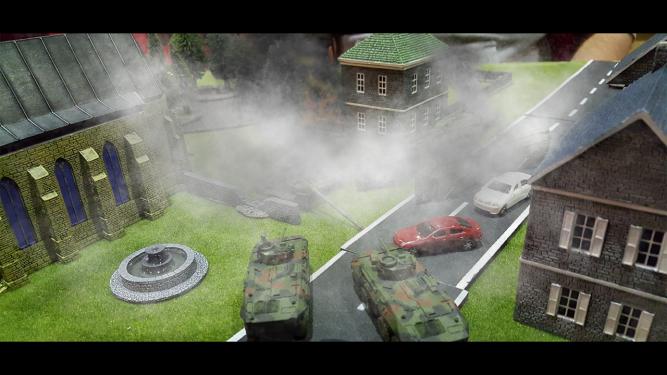 The Marders and Luchs, relentless in their pursuit of the enemy’s anti-air assets had boxed the final two vehicles in. With nowhere to go, the crew fled silently into the woods as the Marder’s 20mm gun sliced through the Shilka’s thin carapace. The jumping radio static startled Hauswald, almost as much as the declaration of destruction of the enemy’s AA assets as it came through the wire. Relaying this, the Hauptman expected Tornadoes to be in-bound shortly. 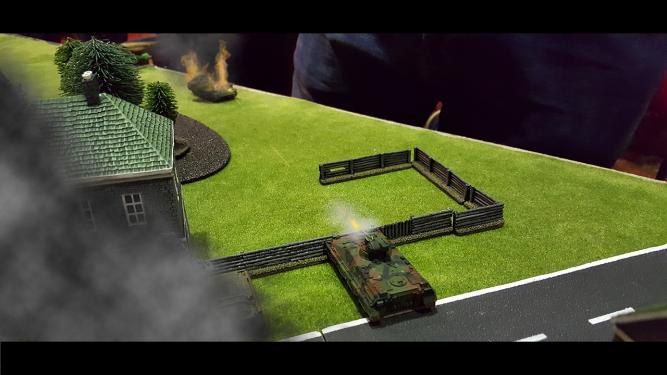 As if sensing this, the Russians made a final exiting maneuver, the T-64s that had been reluctant to move before sped forward in a final hit-and-run, firing their main gun on the move, punching straight through the stationary Gepards in the woods and a single Marder stranded outside of it. Now, the deep rumble of the jet engines could be heard approaching, the Reds took this as their signal to leave, cutting down the final German AA battery with the Hinds machine guns as they disengaged. 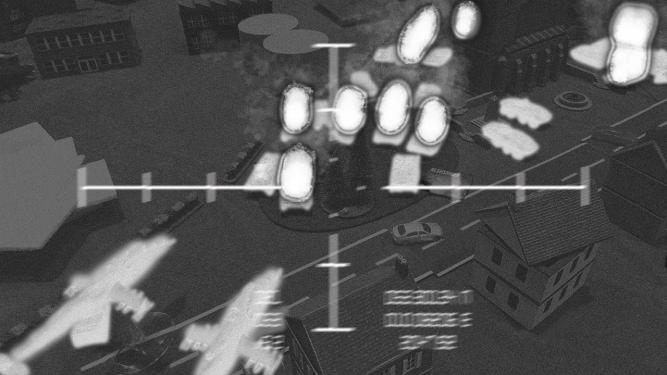 The WarPac battalion was already gone before the Tornadoes swept the battlefield clear, observing moderate losses on both sides of the skirmish. Reports noted that had the arrival of air support not been so timely, the battle would have squarely gone in favor of the enemy. At least for now, the red tide had been slowed, enough to give the boys at the front a breather.